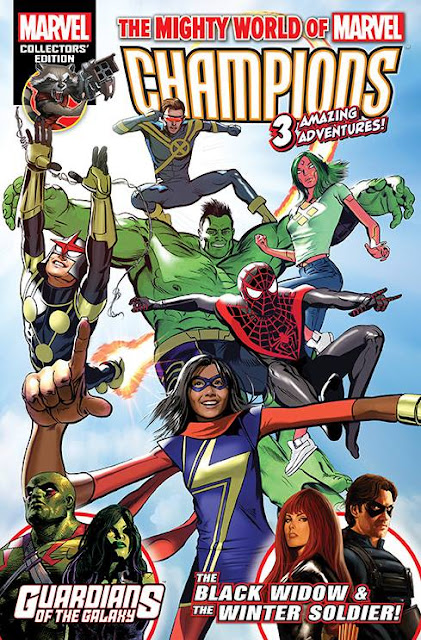 Here are the Marvel Collectors' Editions that you'll find in WH Smith and discerning newsagents from Thursday 14th December. Published by Panini UK, these 76 page full colour comics are great value and are published every four weeks.

MIGHTY WORLD OF MARVEL #16. On sale 14th December!
76 pages! Three outstanding stories! £3.99!
The Champions travel to the Middle East to help a group of endangered women! By Mark Waid and Humberto Ramos!
The Guardians of the Galaxy face the wrath of the Grandmaster! By Gerry Duggan and Aaron Kuder!
The Black Widow and the Winter Soldier battle the deadly Recluse! By Chris Samnee and Mark Waid!
Featuring material first printed in Champions #3, All-New Guardians of the Galaxy #2 & 4, and Black Widow #9. 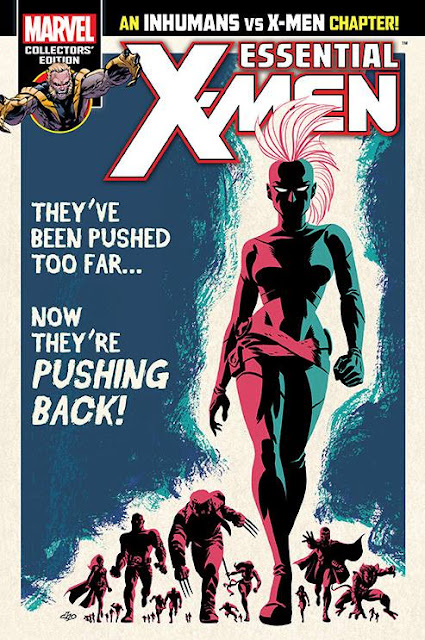 DEADPOOL UNLEASHED #9. On sale 14th December!
100-page special! Four awesome adventures! £4.50!
An ‘Inhumans vs X-Men’ crossover! In the future, the Terrigen Mists have choked the world – now its only hope lies with Deadpool and the Mercs for Money! By Cullen Bunn and Iban Coello!
Deadpool the Duck confronts the diabolically insane Doctor Bong! By Stuart Moore and Jacopo Camagni!
Deadpool and the two Hawkeyes tackle the Black Cat! By Gerry Duggan, Matteo Lolli and Jacopo Camagni!
A new story begins: Back in Black! The Venom symbiote wants Deadpool! By Cullen Bunn and Salva Espin!

Featuring material first printed in Deadpool: Mercs for Money #7 & 8, Deadpool the Duck #5, Hawkeye vs Deadpool #4 and Deadpool: Back in Black #1. 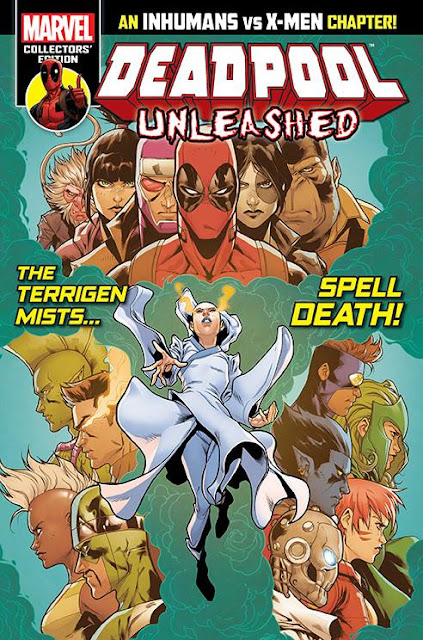 PLUS... Don't forget that Panini UK also publish DOCTOR WHO MAGAZINE, and No.520 (the Christmas issue) goes on sale this week too!
https://doctorwhomagazine.com/doctor-who-magazine-520/ 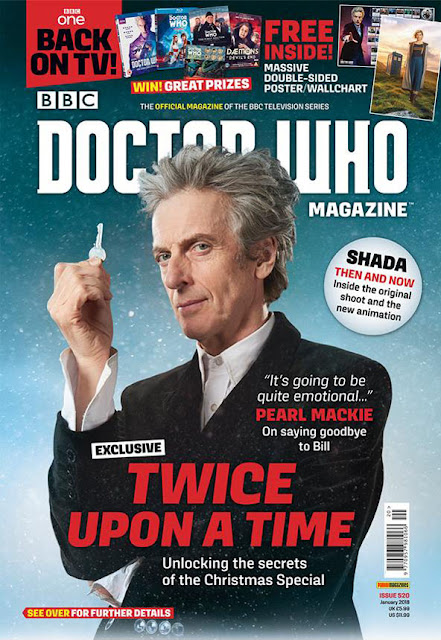 I'll hug my postman if he can get Dr. Who Magazine to me tomorrow (during bank holiday weeks and Xmas, subscriber copies of all publications can often be a day late).

Really enjoying The Champions in MWOM. It's not just a generic team, there's a purpose behind them coming together. For all the love I have for the 70s incarnation (Hercules, Ghost Rider, Angel, Black Widow and Iceman), it did seem contrived, e.g. as if someone had said, "Who aren't we using right now? Well, they're not important enough for the Avengers or Defenders, but we'll call them the Champions!"

I am enjoying the variety of Deadpool stories in Deadpool Unleashed, but I wonder if the Deadpool bubble will burst. Not the greatest fan of his presence in Astonishing Spider-Man. One can have too much of a good thing; subjective though that is, he occupies two thirds of Wolverine & Deadpool and often one third of Astonishing Spider-Man. For how long will UK readers have an appetite for so much Deadpool?

Time will tell, I guess. I've never liked Deadpool so I give his comics a swerve. I enjoyed the movie, as a one-off. Not sure if I'll bother with the next one.

Marvel have wanted to re-use the Champions name for a while, but I think there were rights problems for a few years as another comic had picked up the name. Seems to be sorted now anyway.

Deadpool Unleashed increased in price by 50p last months. Rest of the CE line has remained the same thus far, I wonder if it's because of the perfect bound format. If the rest of the CEs follow that would be the second price rise in 18 month, so looks like Brexit hitting Panini hard. They did say they would bring the DU format in for all titles when their next volumes start and it looks like for Avengers Universe that is in two weeks time, so we'll see then.

Deadpool Unleashed increased in price by 50p last months. Rest of the CE line has remained the same thus far, I wonder if it's because of the perfect bound format. If the rest of the CEs follow that would be the second price rise in 18 month, so looks like Brexit hitting Panini hard. They did say they would bring the DU format in for all titles when their next volumes start and it looks like for Avengers Universe that is in two weeks time, so we'll see then.

I didn't know that, Chris. I'll amend the post.

I think the perfect bound format is a mistake. It makes stories harder to follow when panels disappear into the spine, and the effect of double page spreads are ruined. I'll be dropping some of them if they follow the Deadpool Unleashed format.

Also, perfect bound means no more pull-out posters, which I think would upset a lot of younger readers.

Apologies for the double post Lew! I dont know if the line wide perfect bound thing is dead set, as in a letters page recently there was a letter pointing out the non poster/going in the spine issues you point out.

Re: Parry's question, it looks like they just exhausted the Deadpool and the Mercs for Money series, as it ended with the IVX tie-in. And the spin-offs appear to have slowed down now. So they won't have enough material for both Unleashed and Wolverine and Deadpool much longer. I think W&D will be rebranded, and the main Deadpool series will move over to Unleashed. With X-Men Blue and Gold both double shipping in the US, and Essential not likely to follow suit, they're going to need the space in the Wolverine title for the other X books. For that reason, I think W&D should become Wolverine and the X-Men. Won't be long before we find out what the plans are I guess.

Chris, Hopefully they'll stick with saddle-stitch printing, but these decisions are out of the hands of the editors unfortunately.

Good speculation, James. Let's see if it comes true. (I have no idea btw.)

Yes, the double-bound format can mean panels disappearing into the spine. I have this problem with some of the Judge Dredd Case Files collections (later ones). I need a magnifying glass sometimes to see a word balloon. ;-)

Thanks for the info, James. I suppose it was inevitable, given the CE is reliant on Deadpool spin-off tales. Also, although this is not unique to Deadpool Unleashed, the title has lacked a letters pages more than others. Out of the last 4-5 issues, I don't think there's been more than 2 letters pages. Does this mean it doesn't have the same readership?

If Deadpool Unleashed does end, I'm wondering, do they fill the gap with another CE or would it best, particularly for people's wallets, to just not replace it at all?

It's entirely speculative that Deadpool Unleashed is in any danger of cancellation though. The lack of a letters page is no indication of poor sales. There are Deadpool stories coming up that could fill the issues I think.

If one of the CE's did fold, it'd be good business sense to replace it with another. That's pretty much how comics have always worked, and Marvel still have tons of material that could be used.

I'd be surprised if Deadpool Unleashed just ended - Wolverine and Deadpool is - according to Panini themselves - their biggest selling title so I think Deadpool Unleashed may be doing quite well too as they put it down to the Deadpool effect. They are having their cake and eating it too and as James says something is going to have to give next year.

I just wish we could have a Star Wars CE. I know, despite Disney owning the Star Wars franchise, that the rights are complex, hence why a CE may not be possible.

But I have enjoyed Marvel's Star Wars titles, particularly the Darth Vader series.

I'd love a Star Wars CE, but it may be a pipe dream for me!