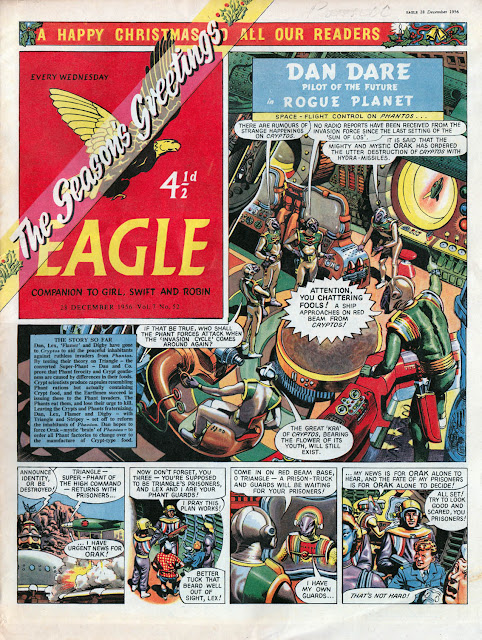 Here's what you've been waiting for; kicking off this blog's traditional look back at selected pages from Christmas comics of the past! Today, a few pages from the festive issue of Eagle that went on sale 61 years ago in 1956!

I bought this issue recently as I was attracted by the unusual Christmas trimming of the logo. Instead of the usual "snow on the logo" approach favoured by most comics, this edition of Eagle gave the illusion of having seasonal parcel tape stuck across it. Real tape similar to this was available back then, and might still be for all I know. Anyway, a very unique festive touch!

The Dan Dare strip, Rogue Planet, is the series in its glory days. Incredible artwork by Frank Hampson and his studio, and memorable scenes such as the arrival of the Kruells. 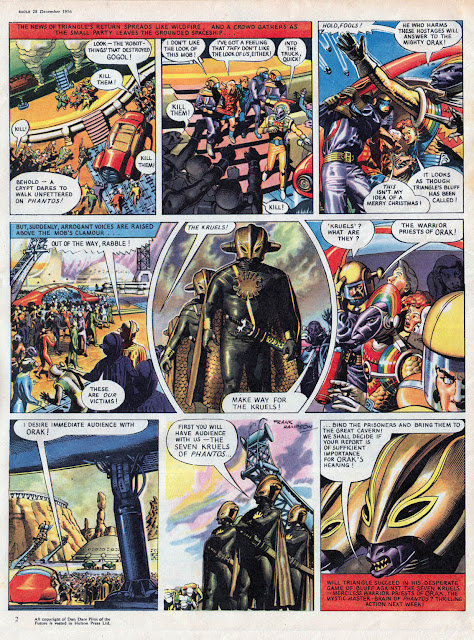 Most of the strips, being partway through serials, didn't bother with a festive theme, but some of the articles did. L. Ashwell Woods' marvellous cutaway drawing this issue used the seasonal increase in electricity demand to show how power reached the home from a nuclear reactor...

The editor's page had a nice header featuring Father Christmas and a selection of news, plus the Chicko strip by Norman Thelwell... 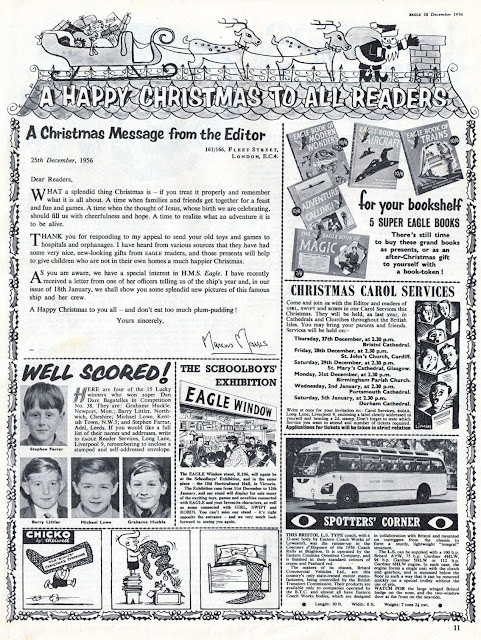 Harris Tweed, by John Ryan (creator of Captain Pugwash), has a brief mention of Boxing Day but no other such reference. However, it shares the page with a very festive looking Christmas Carols competition. (Anyone know who did this striking woodcut styled artwork?) 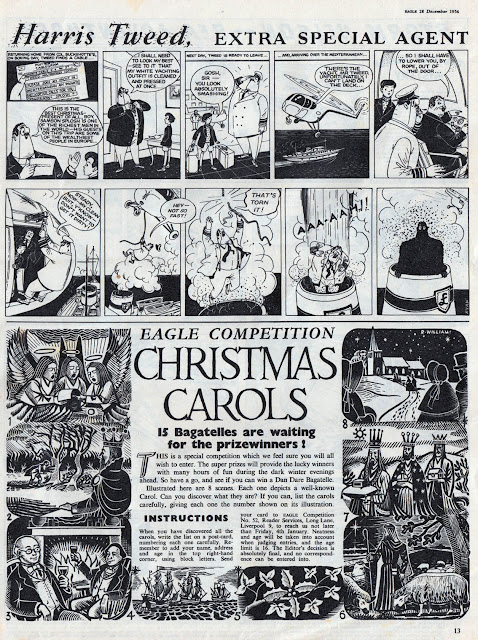 On the inside back page, a feature on caring for wild garden animals in winter, plus a short strip about the a career in the postal service back then... 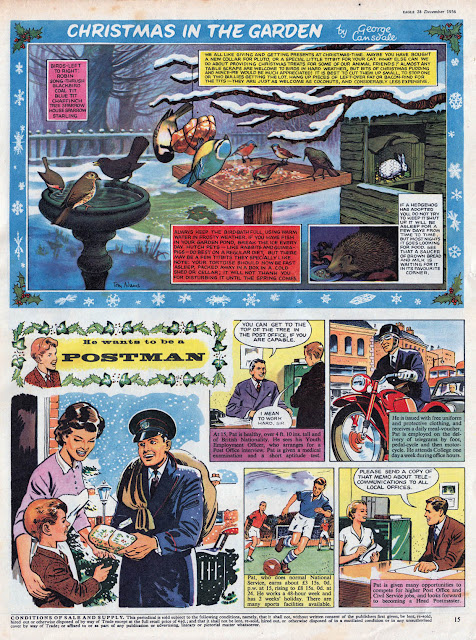 Next time: A different Christmas comic, a different year. Where, and when, will the Blimey-Timey Machine take us to? Find out soon!

Thanks Peter! I've used up most of my Christmas issues in previous years but I've managed to find enough to run this year.

Harris Tweed may seem a bit short on other Christmassy references, but he does end up going down a chimney.

Picture 8 - top right - in the Christmas Carol competition artwork - has a little signature at ITS top right, which I read as "R Williams" but the S may be just two stars drawn in the sky and so "R William". Either.

I was struggling to identify people going to church with a carol but I think it's "O come all ye faithful, or I'm telling Santa". I'm still stuck on number 3 since it's probably not "Chestnuts roasting by an open fire" (which is wrong anyway but especially if you do it like that). It's not "Mistletoe and Wine" either. Not in 1956.

Well spotted, Robert. I don't know how I missed that. Thanks.

Thanks Lew, I look forward to more approaching Xmas.
Can I compliment you on a great xmassy version of the Blimey logo! Lovely job.

Thanks Colin. Whizzer and Chips went up this morning and there's more to come every day this week.

I think "keepsakes" has just won the bagatelle. Well done.

Also liking the logo artwork on this Christmas edition of "Blimey!"