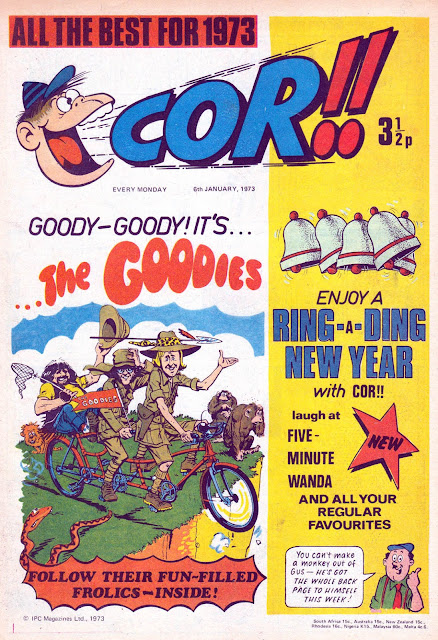 If my settings are right, this post should go live around midnight so a Happy New Year for 2018... and for 1973 in this case! Here are a few examples from the New Year edition of Cor!! which introduced The Goodies as a new strip, based on the very popular TV show of the time.

The cover art is by Joe Colquhoun, proving that he was as adept at humour as he was for adventure strips. Amongst many other strips, Joe was the original artist on Roy of the Rovers in the 1950s, drew the adventures of fighter ace Paddy Payne in the 1960s, and the gritty anti-war strip Charley's War in the 1970s/80s.

He'd used his lighter touch on strips such as Cap'n Codsmouth and Football Family Robinson for Jag so was ideal to draw The Goodies strip for Cor!! 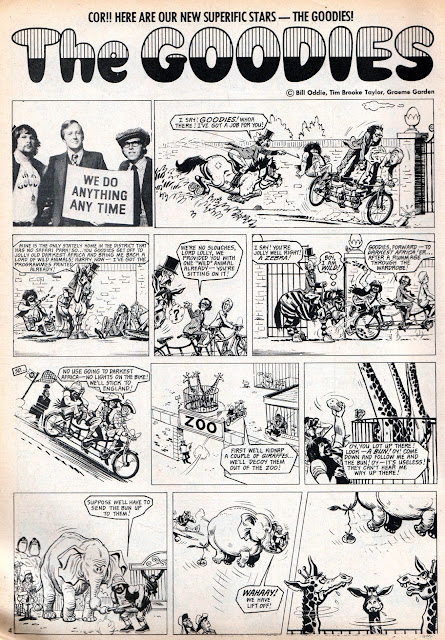 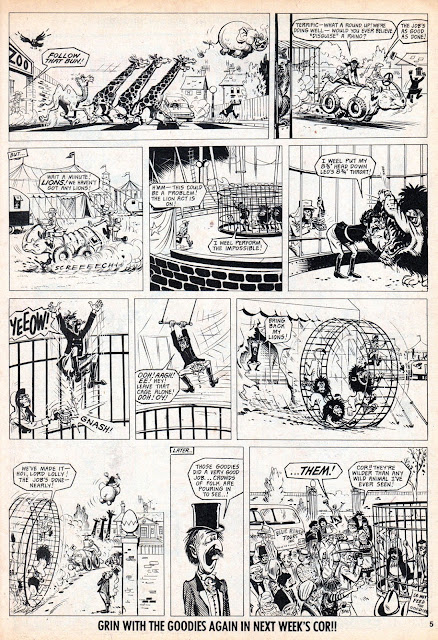 Cor!! was mainly a humour comic, with an occasional light adventure strip. One of the funnies was Whacky, a boy fated to find himself in situations that led to him being whacked on the backside. (It was the 1970s.) The sadistic teacher in this strip gets his just desserts, but it really does read like a very peculiar strip to modern sensibilities with "Sir" obsessed with whacking the boy for no other reason than the teacher obviously gets a kick out of it! Art by Mike Lacey... 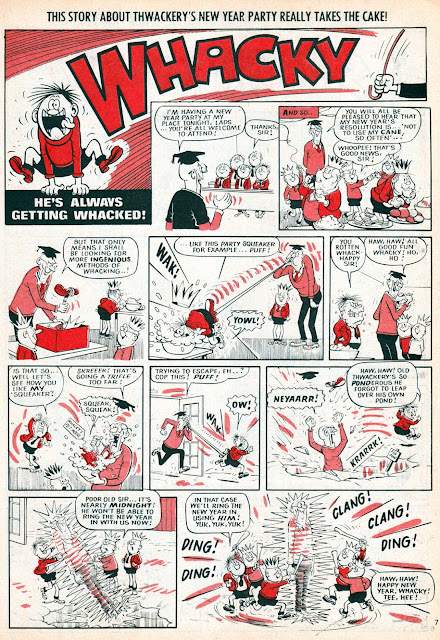 5 Minute Wanda was another new strip that began in that issue. Some IPC humour characters were based on a very flimsy premise. In this case, a girl who gets bored after five minutes. Art by Graham Allen... 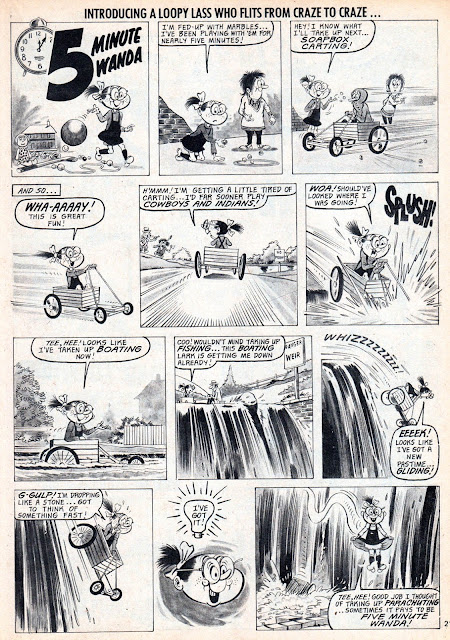 Jasper the Grasper had started out as a very short lived series in Wham! in the 1960s, drawn by Ken Reid. This revived series for Cor!! was drawn by Trevor Metcalfe. That's still Ken's old logo though. 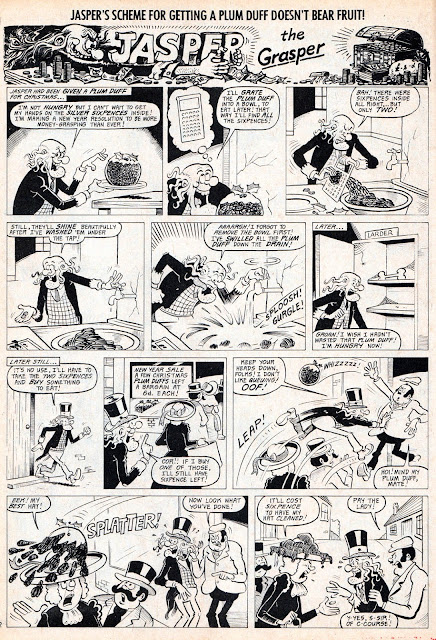 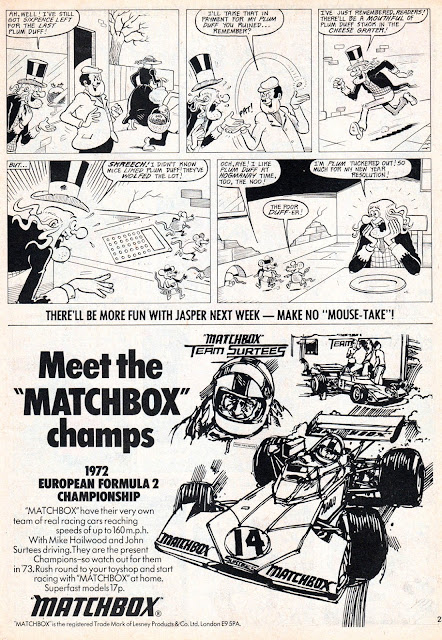 Donovan's Dad was originally by Terry Bave but this one is drawn by Les Barton (who'd been the original artist on I-Spy for Sparky). I don't know if this was a fill-in or whether Les was the permanent replacement, but it's a very nice page. 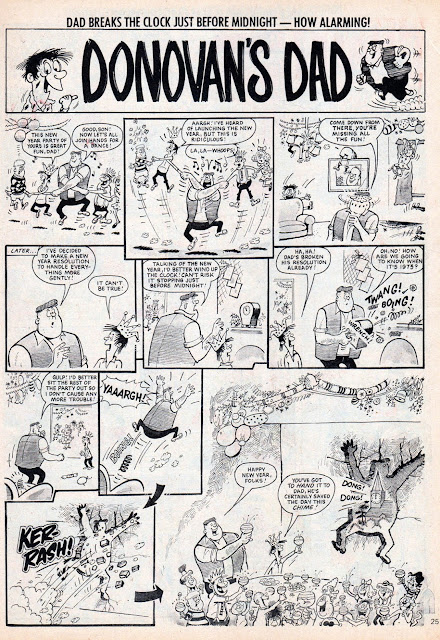 Eddie - He's Always Bored was so similar to 5 Minute Wanda that I'm surprised both characters appeared in the same comic. Both strips even had the same artist in Graham Allen. It was always good to see Graham's work though, as he'd been one of the regulars on the Odhams comics and the first artist on The Nervs for Smash! 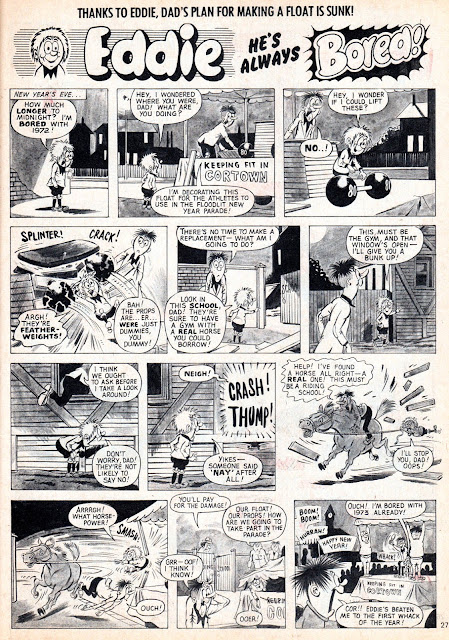 Most of these strips are now ©Rebellion Publishing. I think Jasper the Grasper may be still owned by Time Inc. though (as it originated in Wham!) and The Goodies are presumably still owned by... The Goodies!

The original run of Jasper the Grasper in Wham! was excellent, only 6 weeks which took the comic through its price increase and drop in pagination, and strips temporarily dropped with the decrease of 4 pages were then able to return once Jasper finished, and at that point Wham's decline began.

Yes, shame it didn't last long originally. Ken did such a marvellous job on it. I showed the first episode here on my blog a few years ago:
https://lewstringer.blogspot.co.uk/2014/06/whams-50th-wham-iversary.html

That Ken Reid was an amazing artist. Just had a look at the link you posted. I Imagine the new artist would have struggled to follow that style.

...and a happy new year to you Lew. Keep the posts coming :)

I do wonder if Ken was offered the chance to draw it for Cor and declined. He was busy drawing strips for Scorcher and Buster at the time so perhaps not. Or perhaps the editors of Cor!! wanted a tamer version, which is perhaps more likely considering they never employed Ken. (Cor's loss as far as I'm concerned.)

Like the Avengers in TVComic the Goodies were an odd choice for a strip. A show for adults in a children's comic. I was in primary school when it was on and remember being allowed to stay up to watch it - it was on at 9pm. Most of my classmates were in bed at 7!

I was surprised to learn in more recent years that my schoolmates went to bed around 7pm back then too. I was up until about 9.30pm when I was at junior school, or 10.30pm when I was a bit older. That's when all the good TV was on, and I used to draw my comics in the evenings too! My parents always said I was a "night owl" because I couldn't sleep if I went to bed any earlier, and those later nights didn't affect my concentration at school or anything. I think nine hours of sleep at night is more than enough for children but it depends on the individual I suppose. I guess some need 12 hours sleep!

In fact, the more I think about it, the more likely it seems that the kids who went to bed at 7pm were in the minority. Comics featured strips of The Saint, Department S, UFO, and The Avengers as you said, all of which were on at 8pm or later. Even Stingray was on at 7pm when it first aired. When I was six I went to bed after The Avengers had been on, so that would be about 9pm. By the time I was 10 I was up to about 10.30pm watching Monty Python, as were most kids I knew.

Christmas '72 saw them appear in no fewer than three different specials - A Stocking Full of Stars and Christmas Night with the Stars on Christmas Day, followed by A Collection of Goodies at teatime on the 27th. IPC really couldn't have timed the introduction of a Goodies strip any better.

Thanks Kal. I thought The Goodies was on earlier than 9pm. Thanks for checking that out.

Actually, I forgot to look at results for BBC Two. It did air well past the watershed on that channel, before being repeated far earlier on BBC One.

I'm a bit late for this discussion but I was one of those 'late to bed' kids. As you say, Lew, the interesting telly didn't start 7pm. I can't remember when I did go to bed but I seem to remember that the only night I did go 'early' was Christmas Eve for obviously reasons. ��

Else I would have missed gems such as The Time Tunnel, The Six Million Dollar Man and plenty, plenty more.

Exactly. I feel sorry for the kids who were sent to bed at 7pm! Even back in the 1960s that's when the good stuff started. Even Stingray was on at 7 or 7.15 back then.

Obviously if some kids struggle to stay awake in lessons then an early night is essential, but I went to bed at 10 or 10.30 and was up at 8 the next morning with no problems. (9 or 10 hours sleep should be enough for any kid, I'd have thought!)

I never had any problems functioning the next day either.

Sometimes, people my own age talk about the 1970s as the time they "grew up in", because they were sent to bed so early in the 1960s they missed the culture of the times! (They weren't allowed to read newspapers when they were kids, so that put them even more in a bubble.) I was born in 1959 and have always considered the 1960s as "my era" far more than the 1970s.