The Christmas WHIZZER AND CHIPS (1969) 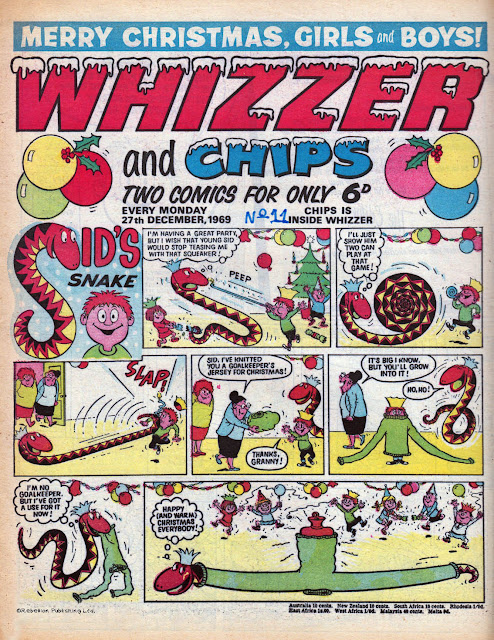 This was the first Christmas issue of Whizzer and Chips, and also No.11 of the series (as you can see by the number I added in felt tip back when I was ten). The cover strip, Sid's Snake, was drawn by Mike Lacey.

As I'm sure most of you know, Whizzer and Chips gave the illusion of being "Two Comics in One" by having its middle 16 pages posing as the pull-out Chips comic. Therefore I'll look at each comic individually...

In Whizzer, Little Saver was a gentle strip, miles away from the humour of the wildly boisterous Power Comics that Whizzer and Chips had replaced. This page was drawn by Les Barton... 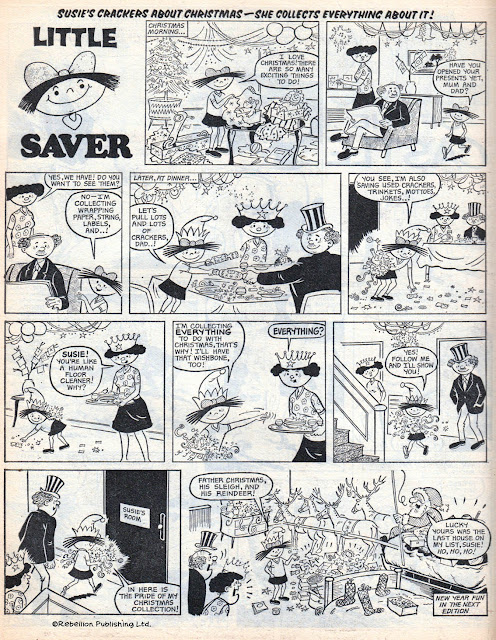 At this stage, Leo Baxendale was still drawing Champ, although not for long as I recall. This was full of his trademark humour and would have been a good fit in Wham! 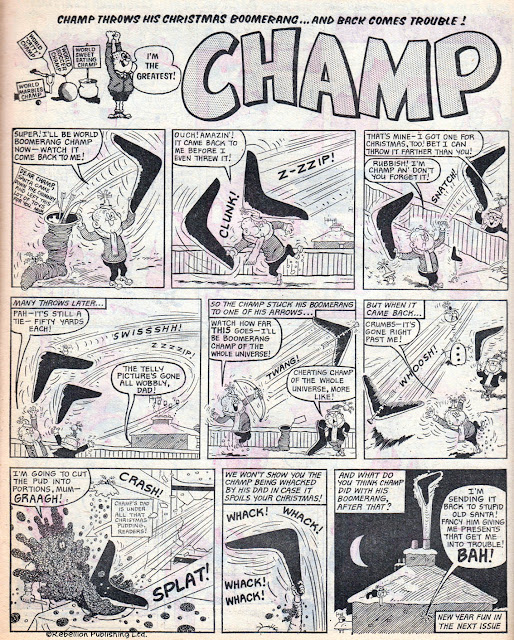 Over in the Chips section, the cover strip Shiner was by Mike Lacey... 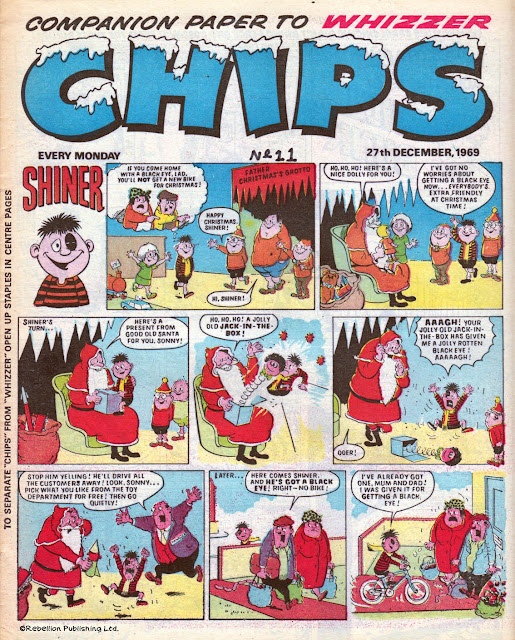 Whizzer and Chips had a good smattering of adventure strips in its early days. This one, The Space Accident, was illustrated by Ron Turner... 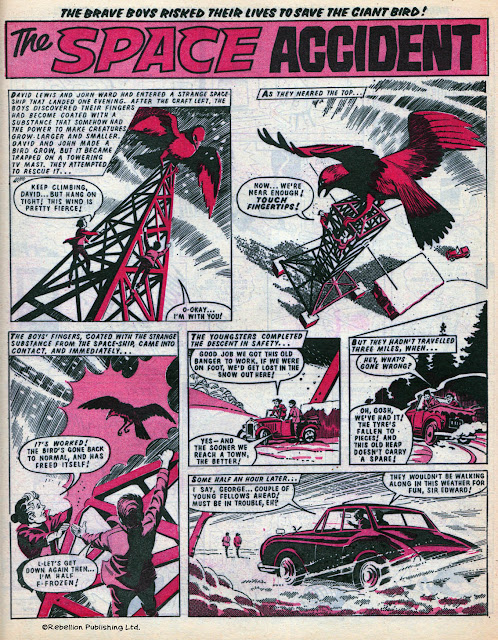 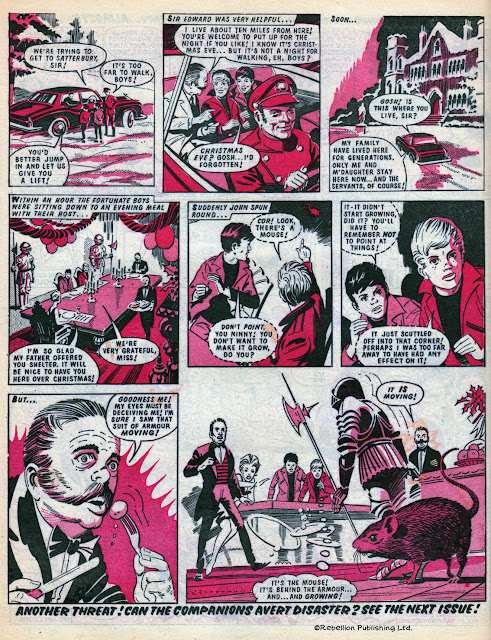 This page of Hetty's Horoscope required some digital remastering to get rid of the inks showing through from the previous page (a result of the cheap newsprint the comic was printed on). However, I decided to keep the crude colouring job I did on it back in 1969. Artwork by Terry Bave... 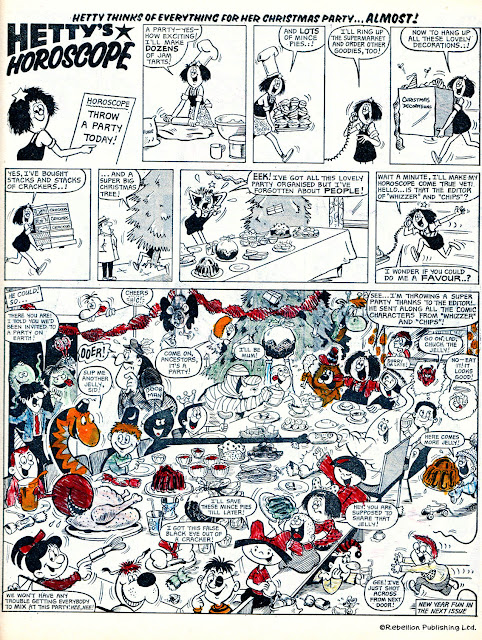 Although IPC had made the ludicrous decision to drop the popular spy spoof The Cloak from Smash! because it didn't suit their narrow parameters of humour, Mike Higgs stuck at it to create something new. The result was Space School, written and drawn by Mike... 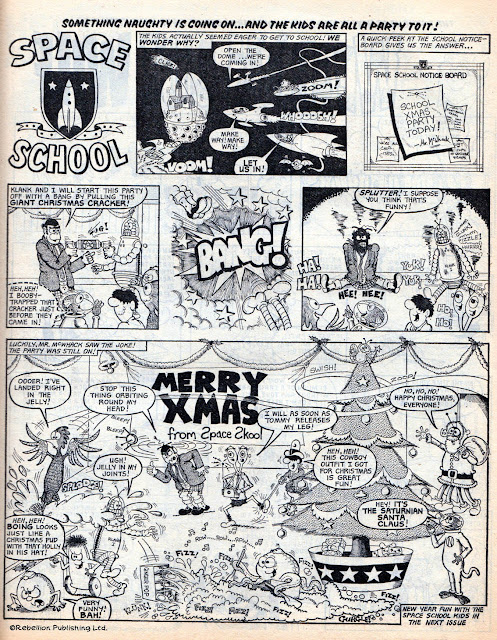 One of the veteran artists on the comic was Denis Gifford, who had revived and updated his old Steadfast McStaunch character from the original Knockout comic to produce new stories for Chips. Denis' clever inclusion of puzzles into the strip was very inventive, and presumably inspired Jack Oliver to do likewise years later... 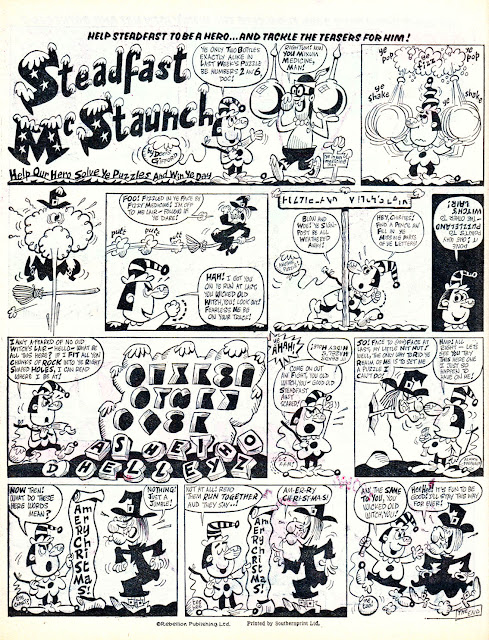 Next time: Another Christmas comic from the past! Which comic? Which year? Wait and see!

That's when the comics had talent! Where did it all go?

I had Whizzer, Corr, Buster, Tv Action every week in them days.

They're all gone now, destroyed by what? No one knows. No one cares.

I frequent e bay and buy old comics. They have many comics there.

Some good some bad. but all readable.

I'm not the only one.

There's still lots of talent in today's comics too. Take a look at the reviews and previews I post on my blog, and see the Down The Tubes blog for more previews of great current comics.

"Steadfast" appears to have a thought bubble actually attached to a stick by a length of string. Based on the traditional jester's equipment - traditional in comics anyway. But showing what he think and hasn't said.

What comes to mind from much more recent media - more negatively - is the Danger Mouse revival's alien villain Quark, a dishonest entrepreneur whose idea of ventriloquism seems to be to say a deceptive thing with his mouth and then involuntarily open his stomach-mouth (yuck) with a Freudian honest remark, which usually other characters don't seem to hear. At one point I think he's shown to use facial recognition security that depends on the user being two-faced.

Must admit I didn't watch Danger Mouse. I was too old for the original series, and couldn't be bothered with the new series. I did enjoy a couple of the comics I bought though. Pity it didn't last!

A second helping of nostalgia. Must be my lucky day. Quite a few Space School strips were included in the Giant Holiday Fun Comic Digest, as well as a healthy helping of The Cloak. One of the first British comics I ever bought waa a 1965 Lion. Both the Vic Gunn and Sinister Island strips referenced the holiday.

Second helping? Ah, you must be a subscriber. Unfortunately if a post goes live after 8am or so, subscribers don't receive it until the next day.

Mike Higgs was the editor of that book you mention, which is why he put quite a few of his own strips in it.

Both this one and the one on the Smash! Christmas issue arrived in my inbox the same time. I get mine at 10 pm Pacific Coast time.

Ah but they were good. I indexed it recently for GCD and did notice his name going into the credit fields frequently. Just wish he had done a sports oriented one. My love of soccer was kindled by Carson's Cubs in Lion. Sorry for the rambling.