The SCREAM AND MISTY special returns for Halloween 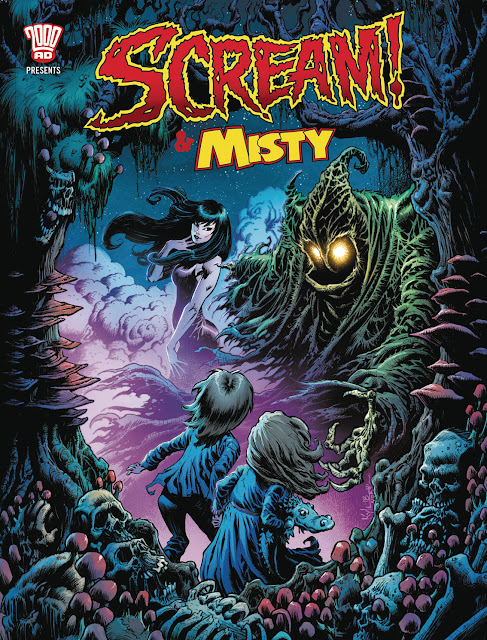 Following the success of last year's revival, Rebellion are once again publishing a Scream and Misty Halloween Special this October. It will feature all new material from today's creators.

It's great to see the title return, and it would be even better if it became more frequent (even as a quarterly, if not a monthly). I still have hopes that a humour title might be revived as a one-off special one of these years too, although there doesn't appear to be anything on the horizon yet. Admittedly, humour is a harder sell for the market that Rebellion has nurtured, and therefore a bigger risk, but maybe one day...

Anyway, back to the Scream and Misty special, and here's the solicitation from the Previews website. Order your copy now from your local comic shop to ensure you don't miss out!

Following the success of last year's fright-filled outing, the Scream and Misty Special returns for 2018! Two of Britain's best loved comics have reunited offering an anthology of brand new tales, guaranteed to terrify and entertain you this Halloween! Featuring more treats than tricks, including the further misdemeanours of Max the computer in The 13th Floor, ghoulish goings on with the undead WW1 pilot the Black Max, zombie and vampire DNA combine to create a brand new horror sensation called Decomposition Jones plus a tomb full of other tales from the realms of the Mist.

Is this likely to on sale in WH Smiths? Because i really hope so.

Thanks for the heads up, Lew.

Will definitely be getting a copy when it comes out.

Like you, would love a regular comic showcasing these strips (and more). A great companion to the megazine.

Not a proper anthology without at least one page of humour. /gatekeeping.

You should pitch 'em a Fiends and Neighbours reboot, Lew.

Not a strip I'm that familiar with, Kal, and not one I'd want to tackle, as I'm already doing two group strips. I'd rather do new stories of my own characters, but at the moment it doesn't look like Rebellion are doing any humour revivals.


Big D, yes, it'll be in WH Smiths. I don't know why Rebellion don't mention that in their PR.

Yes, Sid, I'd like to see some of these classic characters continue in 2000AD or the Megazine.

I think that both Rebellion and DCT could learn something from each other.

Rebellion: That they can do a successful humour comic - Beano, Epic. Perhaps using Buster as their figurehead with a good core of characters.

DCT: That they can do a successful action comic - 2000AD, Judge Creed Megasine. Again, they have a wealth of characters they can use.

Neither company are interested in doing a new ongoing comic for the High Street mainstream as the current retail setup just isn't sympathetic towards it. I think the best we can expect are Rebellion doing more mini-series for the direct market, like their Sniper Elite series, and one-off specials like Scream/Misty.

It would be nice to see DCT get into the direct market with some new comics but there's no sign of that happening yet.

The little-girl-type figure appears to be holding a smallish crocodile, or else could it be - "The Winslow" from the wilder [*] imaginings of American creators Phil Foglio and/or his wife "Professor" Kaja? I think they loan it out for in-joke use, but, check.

Does this or anything else from the cover appear in the magazine?

I doubt it's a literal depiction of anything from any strip inside, Robert. It'd just be a moody horror illustration showing the hosts of Misty and Scream, like the previous special's cover.

Thanks for notice. Really enjoyed this last year. Great if it could be a quarterly.

The alligator is a nod to one of the strips in the comic.