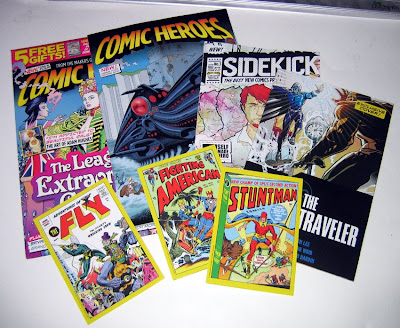 Critics may complain that Future Publishing's Comic Heroes is expensive at £7.99 but the current issue, out today, surely gives value for money. In addition to the 132 page magazine there are two supplementary comics; Sidekick, containing samples of upcoming comics, and, as a special bonus, the entire first issue of Stan Lee's new creation The Traveler, (by Mark Waid and Chad Hardin) with an exclusive variant cover. Both comics have 36 pages each, and with Comic Heroes it's a grand total of 204 pages. If that wasn't enough, there are also three free postcards of Simon & Kirby comic covers.

OK, it's quite a package inside the sealed card wallet that contains everything, but is it a case of quantity over quality? Thankfully no. Comic Heroes No.4 features exclusive interviews with several comic creators including Kevin O'Neill regarding the next book of The League of Extraordinary Gentlemen... 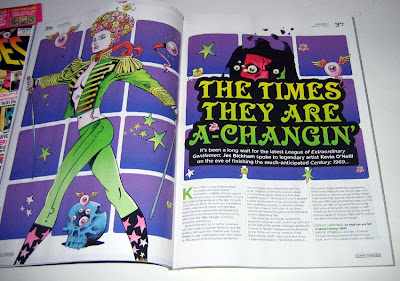 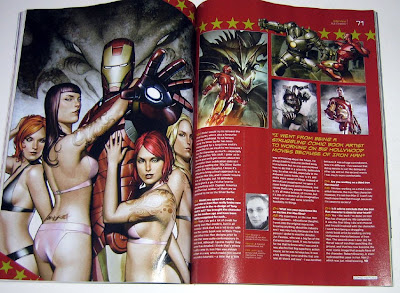 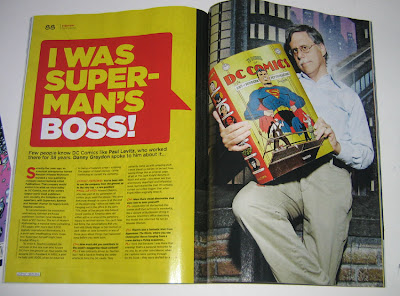 ...plus other well-known comic giants such as Dave Gibbons, Mike Perkins, Brendan McCarthy and more contributing their knowledge to the How To Draw For Comics feature... 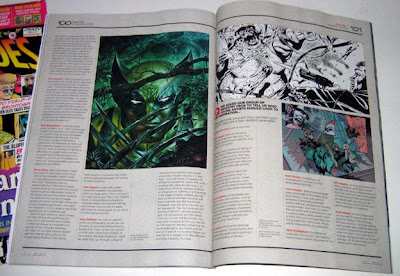 There's plenty more besides, including columns by Dez Skinn, Joel Meadows, Bryan Talbot, and articles such as Paul Gravett on Moebius... 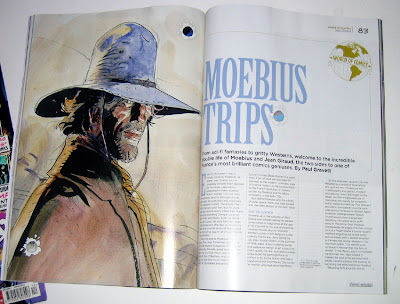 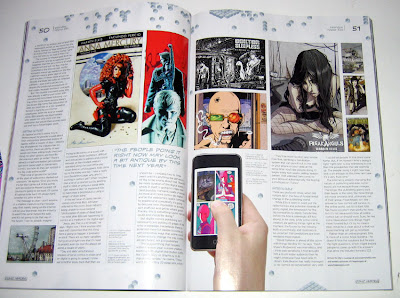 ...and a fast-paced time-trip summing up 100 years of British superheroes in 2000 words by some bloke called Stringer... 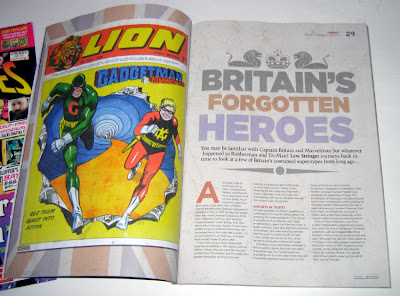 Obviously I'm a bit biased as I'm a contributor but I still think Comic Heroes is a valuable asset for anyone seriously interested in comics. The writing style is accessible for new fanboys and fangirls as well as long in the tooth fangrandads and fangrans, and the magazine is well designed and easy on the eye. 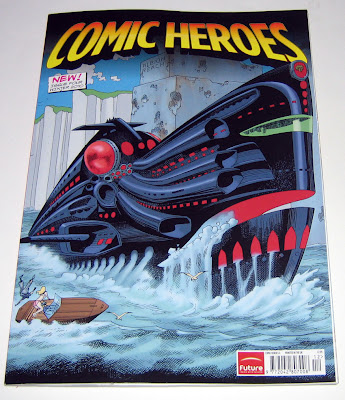 As mentioned here last week, the magazine has proven to be a success and it's increasing its frequency to bi-monthly effective immediately. (No, the price won't be going down. Sorry!) That means that the next issue advert in the back of the current issue, saying that No.5 will be out on March 15th, is now out of date. Look for No.5 on February 24th 2011.

However, that's two months away. Comic Heroes No.4 awaits your indulgence first. You should find it in WH Smith beside SFX, 2000AD, Empire etc.

Initially I was in the "how much??" camp until I realised how the page count and reading time of Comic Heroes compared to a couple of the latest comic releases. Comic Heroes is by comparison very good value for money isn't it?

The thing is, the regular copy of SFX (and other similar genre mags) costs around £4 - and that's for 148 pages. The Sidekick book just sounds like a piece of advertising. So, unless that Traveller comic is worth £4 (i.e. is a $5.99 comicbook), it's still a rather steep price.

I'm sure it's worth it but when you consider it's twice the price of other similar mags (and the price of a 6-issue TPB or a paperback novel) then it does put me off.

Yes, I see what you mean. However it's all about how large the market is for such mags. One could say SFX should be as cheap as the TV Times, but that can't happen because SFX's lower circulation means higher unit costs. I imagine Comic Heroes has an even lower circulation than SFX, so the unit cost is higher.

The £7.99 price is also a good incentive for retailers to stock it, as they get a bigger cut than they would on a cheaper mag. SFX is already a well established title but Comic Heroes is still a young magazine that some retailers might pass on ("Only comics? Not worth my time.") if the profit margin was smaller.

Compared to the prices of other magazines about comics (Alter Ego, Back Issue, Wizard, Crikey!) Comic Heroes is reasonably priced for what you get.

The interviews get on my wick slightly though. Not very in-depth, more the sort of thing you read on the internet, puff peices promoting a particular comic. In these internet days i don't really think there is any need for that in a mag. What i want from a magazine is in-depth interviews I can sit on the sofa and get my teeth into, more like the Alan Moore one from issue 2 rather than the poiuntless Bryan Talbot and Grant Morrison from last issue. The Talbot was the main reason I picked it up so that annoyed me in particular.
Generally it's very good and I'm all for it, despite sounding like a moaning bugger. Really enjoyed your last article Lew, and looking forward to the new one. I think the historical articles are definitely it's strong point.

As I've got older I've found it's less about the money and more about time and space.

I passed over the first two issues but (based on what I've read here) bought #3 on Sunday and #4 today - both from the local WH Smith.

Would agree with Boo909 that a bit more depth wouldn't go amiss once it's established. A bit less Hello magazine and a bit more Neil Spencer era NME. Be interesting to see where it goes when it's exhausted the current set texts.

But bottom line is it costs less than I'd spend in the pub , can be rewound and reviewed at my leisure and doesn't leave a nasty hangover - apart from positive reviews of DC's Blackest Night.

Only downside is that , as a subscriber to Word and Mojo, I don't want additional glossy dead trees filling my flat. But if they'd do a digital version I'd be right there every 8 weeks.

Yes, I see what you mean about the tone of the articles. I think Future tend to keep their features quite light and fun because it worked for them on SFX. Thankfully it's not as bad as Wizard though and there is more depth in things like the "How to" features.

I suppose it's a case of striking a balance to please long term fans and people who have never read a magazine about comics before. It's also a case of the word count given to the writers. I a remit of 2,000 words each for my history of humour comics and UK superheroes features, so they were quite breezy (but informative I hope). Next time I'll probably focus on just one character/comic/strip to give it more depth. (Doubt I'll be in issue 5 though as the deadline is too close, so I'll probably be back for No.6.)

A great issue and found your British heroes article to be very good - I wrote about it http://tainted-archive.blogspot.com/2010/12/britain-we-dont-need-no-superheroes.html

I do think it's a bit expensive, though.

I'm enjoying the magazine at the moment and I'm finding it an invaluable source of reference. What I’m particularly enjoy is how wide and varied the content actually is. I’m a lecturer in animation and I find that a lot of the students have only a basic limited knowledge of what the current fads are out there and they are never able to contextualise it. Having this magazine on my desk as actually opened their eyes to want an expansive universe is out there as regards cartoon and comics. I’ve actually used the contents of the magazine to write a new degree in Cartoon and Comic Arts at Staffordshire University and this is the one magazine I’ll be strongly recommending the cohort to read.

Far too pricey, i agree! i think its sad that future publishing are excluding a very large younger audience who would like to read Comic Heroes, but cannot due to the hefty greedy price tag ... located in crafty teeny weeny dull print over the barcode. The 'free gifts' are superfluous and even annoying! i purchased issue 1, which i believe was a special, and everything inside the bulky sealed envelope was damaged due to identation imprints the free metal badges had left! You can't survey the condition of the contents due to the cardboard exterior. Beware!

Why can't we just have the mag for four quid like SFX?

I'll stick with Alter Ego, which by the way is half the price of Comic Heroes.

I think it's been a long time since Alter Ego was £4. The most recent issues I bought were £5.99, unless you're talking about the digital edition?

Comic Heroes isn't as cheap as SFX because, for one reason, comics are a smaller market than film and tv so the potential sales are smaller. The other reason is that Comic Heroes needs to establish itself with retailers, and the profit from a £7.99 mag is more of an incentive for WH Smith etc than it would be for a £4.00 magazine.

If the situation was like it used to be before retailers started charging thousands for shelf positioning we might see more, and cheaper, magazines. As it is, it's a struggle for any new title to be accepted by the retail chains these days.