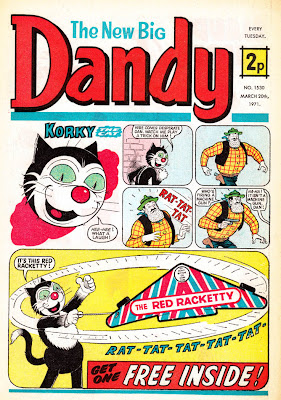 Here's your weekend flashback to free gifts of the past, kicking off with a 1971 issue of The New "Big" Dandy. (Called such because it was the second issue to have 20 pages instead of the 16 it had had throughout the Sixties.)

The Red Racketty was certainly a noisy gift. Consisting of two pieces of card, and weighted by a 1p coin (not supplied) taped to the nose, the gift would make a loud vibrating noise when swung around the room. Ideal for making the neighbours wonder what the heck was going on. 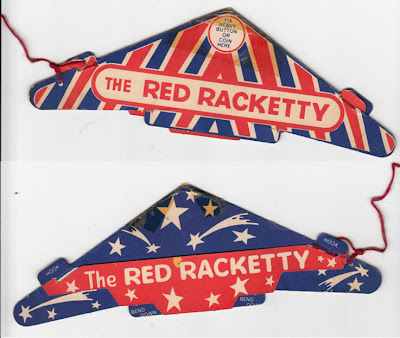 The gift was later repeated in Sparky, but renamed Wot-A-Rackett! 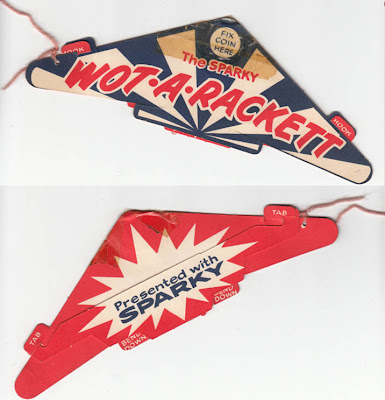 The following object may look like something you'd find in an Endoscopy department of a local hospital... 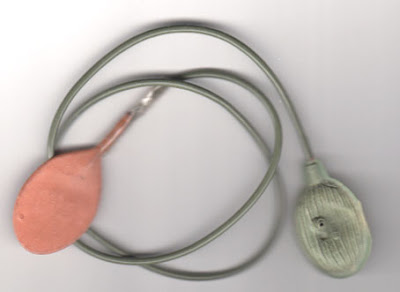 ...but fear not. It was merely the Plate Wobbler given free with IPC's Monster Fun Comic No.1 in June 1975. (Cover by Robert Nixon.): 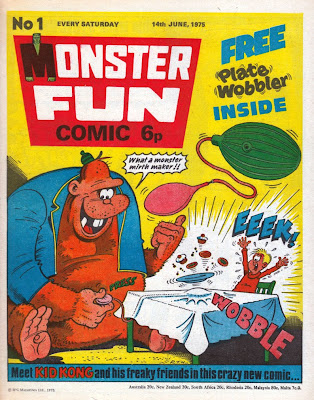 Here's a set of stickers given inside Warlord from 1975: 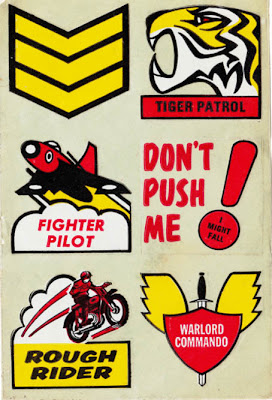 By 1981 TV Comic was a shadow of its former self. It had returned to being a 16 page comic and was printed on cheap paper, but it tried to recoup some lost readers with Popeye Skin Transfers. (Peel off the protective opaque sheet, place on skin, and hold a wet flannel over the back of the card. Moments later - the images are transferred to your arm. Or wherever.) 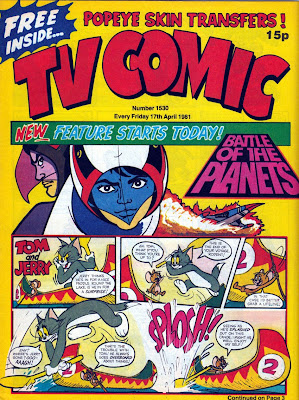 In 1984 D.C. Thomson's Champ comic gave away these six stickers: 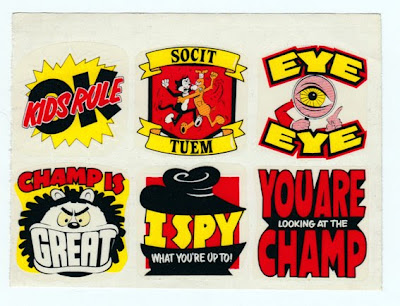 Sponsored free gifts began to emerge in the 1980s. Clumsy Colin, the face of KP Skips, appeared on these two gifts that I think were presented with Buster. (Correct me in I'm wrong. It was definitely an IPC comic anyway.) 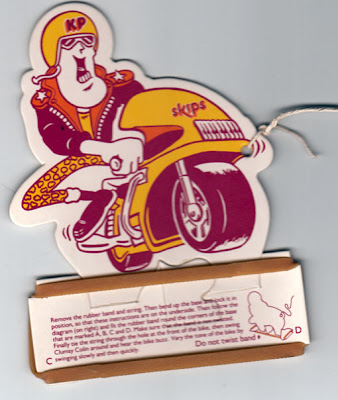 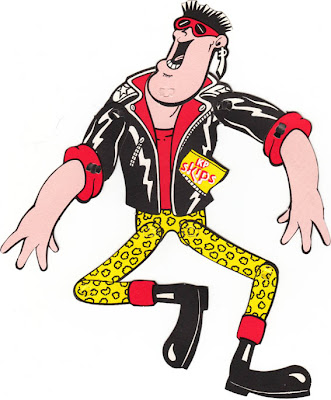 Remember the Captain Britain Boomerang from the previous post? Here's the exact same idea reworked by IPC for Buster in the early 1980s:

Finally for today, a sheet of stickers given free in Topper 89, back when D.C. Thomson decided that adding the year to the comic's title would make it sound modern. (Yes, the comic became Topper 90 the year after.) 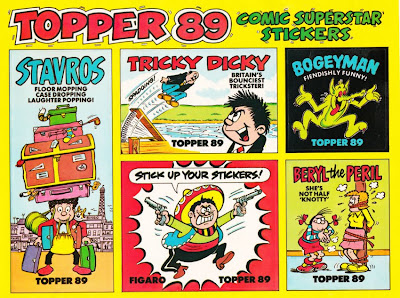 Look out for Part 6 of this feature in a few days time!

I remember Clumsy Colin from Buster and those free gifts..
I still am a big Skips fan..got my six pack in the cupboard..well they've gone now..

You'll kick yourself when you realize Peter. It's a joke - Sock it to 'em! Appropriate for Puss & Boots> :)

No worries Peter. We all have our off days. :-)

Great to see 'Monster Fun', Lew. I still possess every issue! Also a 'flipping' cardboard Dracula from 'Cor!', a whistling pen top, kazoo and vampire teeth from 'Krazy', a rubber skeleton from 'Monster Fun' etc, etc... I must have approx 4,500 comics stored in my nephew's flat which would have been thrown away if my Mother had had her way all those years ago!

The pop gun you featured as a free gift looks suspiciously like the one in my collection that dates back to the 1st issue of D.C. Thompson's 'Crunch!' (1978). I still possess the free gifts that came with my comics and feel that they provide an extra 'buzz' to those wonderful childhood memories, like the smell of the print that never goes away (in your mind that is!). I could never understand how my friends could throw their comics away like sweet wrappers, as I regarded every issue like a work of art and now in my 40's I still can't bare to part with them. The writing and art-work came out of a more innocent time which can never be recaptured and for my money will never be bettered, eventhough I try maintaining the same standard in my own work. I will never forget the excitement I used to feel when a new comic was advertised on the tv (unimaginable today!). Comic strip characters were actually animated (briefly) and I can still remember the 1977 commercial for 'Krazy' comic (which also features in my collection) with each member of the Krazy Gang being introduced including the brilliant Cheeky popping out from a man-hole cover. Perhaps reminiscent of the episode 'The Girl Who Was Death' from 'The Prisoner'...but that's another story!!! I think I cried when 'Krazy' joined 'Whizzer & Chips', but had kittens when Cheeky branched out on his own with 'Cheeky Weekly'. God, IPC were so imaginative back then and I almost wish I'd been 10 years older to have been in with a chance of working with them sooner and for longer... A similar magical moment occured over at D.C. Thompson when Plug launched his own comic 'Plug' (what else!) and I still have the picture set holder from the 1st issue! Oh happy days... BCNU.