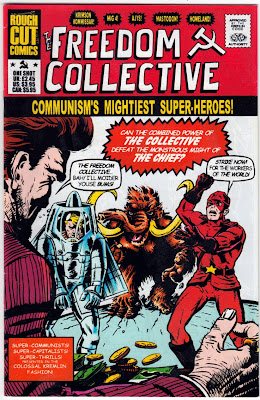 I received an interesting package a few weeks ago from longtime comic fan Iain Henderson which included this fine comic, The Freedom Collective. Published a few years ago by Glasgow's Rough Cut Comics the 32 page one-shot is well worth a look.

Edited and co-created by Iain Henderson (or Igor Sloano as he's called here) the idea behind The Freedom Collective is What If Stan Lee and Jack Kirby had been born behind the Iron Curtain? What kind of comic might they have produced at the height of the Cold War? 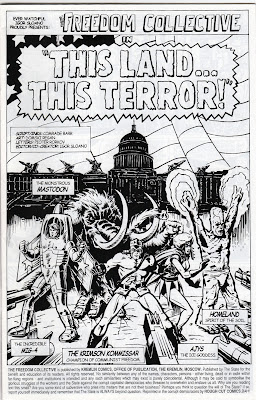 Like most people with an interest in comics I'm a huge fan of the Lee/Kirby comics of the 1960s. However it can't be denied that some of the anti-Communist stories in the Marvel Comics of the era were a tad over the top. This seemed only natural at the time of course, and what The Freedom Collective does is to cleverly mirror that from the Soviet perspective. "Communism's Mightiest Super-Heroes" are a Red reflection of Marvel's Avengers, with "MIG-4" instead of Iron Man, "Mastodon" instead of the Hulk, "Ajys the Ice Goddess" instead of Thor, "Homeland, Spirit of the Soil" instead of Giant-Man, and "Krimson Kommissar" instead of Captain America. 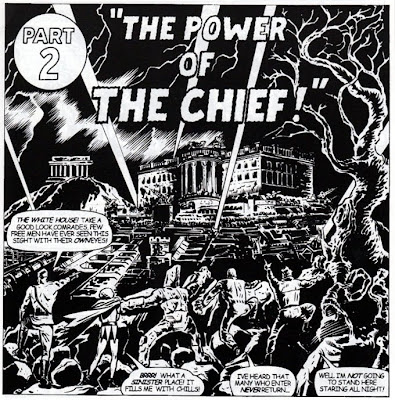 The script and inks are by Colin Barr with pencils by Dom Regan. The plot involves the Collective traveling to America to "rescue" a defector and his family from the evil clutches of capitalism. Everything is played straight and in doing so it heightens just how extreme Marvel used to be with their propaganda. Of course it leads the reader to chuckle along with the creators who are obviously enjoying turning our expectations upside down. In lesser hands this would have been done as a basic humour strip but here it's produced with intelligence and wryness. 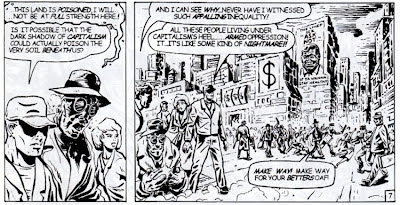 As an added bonus even the ads in the comic follow the same conceit, inviting readers to send for the Kremlin Kraft Photo Retouching Kit and to Record Your Parents Voices At Home. There's also a letters page too, with of course any "subversive" anti-Soviet comments blacked out and the editor threatening the young readers with KGB intervention.

All in all it's brilliant. Simply brilliant. If you didn't buy a copy when it came out, put it on your list for 2011.

May I just point out that Mr Henderson only came up with a very basic and incomplete concept. The actual finished comic was the result of the combined input of the ones who wrote, drew, created and developed the specific characters. Mr Henderson is in no way connected to Rough Cut Comics, who wish he would desist from trying to associate himself with the finished product. Any Freedom Collective website by him is not
endorsed by the publishers and copyright holders and should therefore not be considered official.

Sorry "Anonymous" but I'll need to know your identity before I change anything about that post. If you check the comic yourself you'll see that "Igor Sloano" is credited as editor and co-creator. Are you saying that it's not an alias of Iain Henderson?

Mr Henderson is Igor Sloano. The credit was a courtesy to acknowledge his suggestion which led to the creation of the comic. However he did not originate any characters or character designs. The true creators of the strip are the others involved. They made the comic what it is. By promoting himself as the creator he assumes a disproportionate share of the credit which rightfully lies with the other contributors. The copyright of the comic lies with Rough Cut Comics with whom Mr Henderson is in no way associated. It does not lie within his province to assume the responsibility for promoting the strip and thereby suggesting an association with the publishers or involvement in any future development of the characters.

I've only repeated what credits were given in the comic; that Iain Henderson was the editor and CO creator. If you have a personal problem with Mr.Henderson I suggest you take it up with the publisher.

Oh no not ANONYMOUS again!LOL.

Perhaps if ''Anonymous'' said who he/she is it might help verify their point?

Right now it's just very vague rants that can't be checked either way.

Well hang on a minute ... if this Mr. Henderson was, in fact, involved in the creation of the comic doesn't that give him a kind of "Stan Lee" type credit? Without a concept there would have been nothing for anyone else to work on.

And why are you going with "Anonymous"? If you have an ax to grind, man up and stop hiding behind the bushes.

I'm reaching the point where I may disable the option of posting anonymously. I don't want this to develop into another fiasco like we had a while back.

I have no differences with Mr Henderson. I merely want to make sure that people know he is not associated with Rough Cut Comics in any way, and is not involved with the strip in any way beyond his initial input. As for editor, proofreader would have been a more accurate credit. As he insists on perpetuating his past involvement with the strip, people may be misled into thinking that he is still connected with it. When Mr Henderson insists on 'promoting' the comic from a few years ago, he is only trying to promote himself. I repeat: he is in no way connected to the publisher and copyright holder of the strip called The Freedom Collective, Rough Cut Comics.

Bringing the comments back on topic I thought The Freedom Collective was a fun quirky book. I picked it up a while back. I was impressed with the professional look of the strip. Didn't Dom Regan work for 2000AD or a similar publication? What's he doing now?

As the discussion descended into abuse and off-topic comments I've now deleted several related comments. My apologies to the GENUINE people who had responded to the trolling of "anonymous" and co.

To give a final answer to "anonymous"; if a contributor gives me a copy of a comic I don't assume that they're "connected with the publisher". I just assume they did a bit of freelance work on it, which seems to be the case from the credit in the comic itself.

If people have problems regarding the rights to the strip please sort it out privately. Abusive comments or anonymous allegations will not be tolerated on this blog. The anonymous option is not there for people to cowardly hide behind it to sling mud.

Peter, I believe Dom Regan illustrated strips for Trident many years ago and more recently has worked as a colourist for DC Comics.

What is the anonymous option there for then?

I suppose it's a test of character. You failed.

You offered the temptation. The dealer is as bad as the user in my view.

Yeah sure. So there was the anonymous option button, flaunting itself, and it deserved what it got did it?

I'm sure we've all heard crazy "logic" like THAT before.

Your choice. Your responsibility. No one else's. Deal with it and stop blaming anyone else.

This thread is now closed.

Your choice to offer the anonymous function, therefore your responsibility. Drug dealers use the same cop-out you do. The same crazy 'logic' you're using. You always do a runner when you're losing I notice. You are logically and morally bankrupt.

I was in two minds whether to pass your latest comment or not, but I decided I would for people to see how detached from reality your claims have become.

If you feel you have an addiction to posting abuse and insults on blogs I suggest you swiftly seek some professional help. Good luck.