A bumper size Christmas for 2010 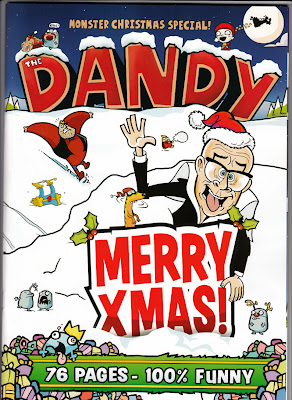 The double size "bumper Christmas issue" used to be a standard festive occurrence for many British comics in the early decades of the 20th Century. Somehow, over the years, it fell out of favour, possibly when wartime paper shortages came along.

However, several years ago the concept was revived, with, as decades ago, companies publishing a thicker Christmas issue (at a higher price of course) to compensate for skipping a week or two over the holiday period. Last week The Beano published its Christmas issue with 48 pages (a 50% increase on the standard 32 page weekly). Today The Dandy (No.3515) celebrates the season of goodwill with the biggest issue of its 73 year history, weighing down the shelves of newsagents with a hefty 76 pages. 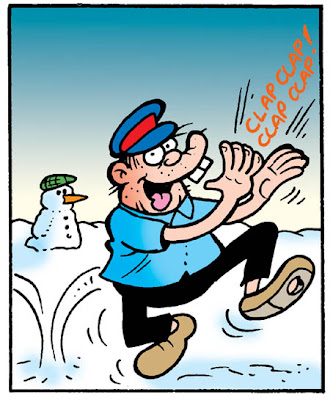 The cover topline announces the comic as a "Monster Christmas Special", which is appropriate given the format. The covers and a few interior activity pages are on card stock, whilst the rest of the comic is on quality paper. The material is all-new, all-colour, and the logo has a fifth ink gold trim. D.C. Thomson have clearly pushed the boat out this year.

Inside, the regulars from the recent revamp are all here plus extra strips such as Nigel Parkinson's 8 page panto story, three helpings of Desperate Dan, the debut of new story Bear Thrills and much more. There are no free gifts as such, but the humourous festive cut-outs on card stock are close enough to qualify.

This issue will be on sale for three weeks and costs £3.99. Well worth it, I think. 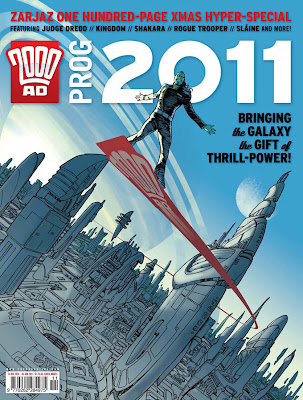 If you have any spare change after buying The Dandy the Christmas triple issue of 2000AD also came out today. Continuing its 11 year tradition the 100 page Prog 2011 is a good jumping-on point for the start of new serials. The first episodes of new runs of Shakara, Ampney Crucis Investigates, Necrophim, and Kingdom start here, plus a complete Judge Dredd strip and bonus one-off stories of Slaine, Judge Anderson, and the return of writer Gerry Finley-Day on Rogue Trooper, wonderfully drawn by Staz Johnson. 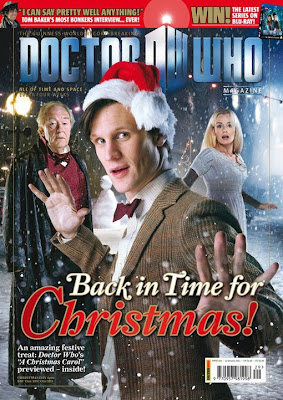 Finally, the Christmas Doctor Who Magazine is also out this week, with an increase to 84 pages. Glad tidings indeed.

While i know now, when i was younger, i didn't know that some Bumper Issues were a little bit of a rip off. Sonic the Comic did a Bumper sized Christmas issue (Issue 118- 16th December 1997) but for this Bumper issue.. They increased the price.. Okay, it was only by 25p but the comic costed £1.25 at the time.. so that extra 25p is a fair bit then.. It's funny to then read all that say about 'Here is a Special Bumper issue as a gift to you' kinda stuff but know you are being charged for that extra bit.

before (like #41 23rd December 1994), they just gave an extra story, which might have been more pages, or just moving things around (It was a good story Lew.. though it does seam odd for an extra christmas issue story not to be a christmas story ^_^)

Though it is an intresting look at how they tell the kids it's a special nice thing, but for the parents, it means MORE money to spend on top of all the christmas stuff

I'm not sure if most of them pretended they were giving you more for the same money did they? "Special" just means it's a special issue, not a gift. I could be wrong.

I'll have to check on those issues of Sonic when I have a spare day. After all these years I can't remember most of what I wrote for them. :)

Ah.. Looking back, in the Case of STC, it seams more the tone that was saying it was a nice thing in a way.. 'Exclusive - Mega Sized issue' (which was 7 pages more) and "There's an Extra Seven Page Sonic Story" which seams to make it seam like a special event more then we are giving you 7 more pages and charging you for them for this issue and i was getting some of the wording confused with issues 41 and 42 which were Megasized (or bumper sized, depending on what part of the issue you read) and didn't go up in price (nor did it miss a fornight release)... I really must re-read things and try to look under the 'first impression' some times.. Though i'm sure i remember a number of comics and such they used to go on about how great it is to be a big/bigger issue and all, but did increase the price.. i know it all makes sense to intrest but it's just the way it seams to be sold to the kids was more about the fact of getting more pages as a special thing, more then a case of giving you a bit extra for extra money (which.. isn't really that special is it?) So.. it's party my fault.. but the tone of it seams to be saying how special and nice to have this, but it's a bit like going to a shop, seeing they have a special 8 pack of something, instead of 6, but noticeing the 8 pack is in fact at a higher price then the 6, so there isn't really anything that special amount it..

and yeah, its kinda nice when it does take the place of so many issues but, in a way, this days there isn't soo much a 'lets not leave the house for X amount of weeks' around christmas, so kids might be getting more for one week, but then have X amount of weeks to wait to get more... Personally, i like to space out some of my reading so i read no more then a set amount a day, but as a kid, as soon as i got a comic, i read the whole thing a few times and was then waiting for the next one.