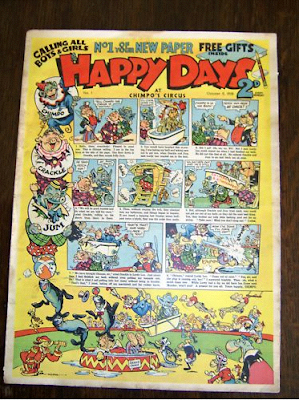 Bidding has just ended on eBay for a copy of Happy Days No.1, the first photogravure (glossy) comic published by Amalgamated Press, dating back to 1938. With the starting price at £195 the comic failed to attract any bidding.

The lack of movement on this item surprised me, as it is indeed a very rare comic. As the seller hamer8 said in its description: "To put it in context. The first Beano? We've had five or six through our hands. The first Dandy? Four or five. These comics sell for 4 and 5 sterling figure sums. They are iconic titles and genuinely SCARCE. Happy Days we have only ever had TWICE including this one. In fact we've only seen any of the 45 issued twice."

I've never seen any issue of Happy Days on sale on eBay before, or at any comic mart, and I have been looking. Such is its rarity. As for its historical importance it boasts some of Roy Wilson's finest work, and in full colour. As a photogravure comic published at a time when most comics were black ink on cheap coloured paper it was a luxurious standout title. A landmark in the history of comics.

In which case, why didn't it sell today? For one thing the expensive run-up to Christmas wouldn't have helped. Most people who are fortunate to have families would have other priorities for their savings. Secondly, collectors are usually inspired by nostalgia and, sadly, the number of people around with pre-war nostalgia become less and less each year. Even those that are still with us may balk at paying £195 out of their pension for it.

I collect old UK comics but I didn't bid on this one because the price was higher than I'm willing to pay for one comic. It was tempting but I've spent enough this year on old comics as it is. Some people do pay such prices of course, and much more besides, as proven by the record sums that first issues of Dandy and Beano have sold for. However, Dandy and Beano are well known brands, so purchasing their early issues is a reliable investment. Unfortunately, Happy Days, although a rarer comic, simply isn't known outside of collecting circles, and even then the younger fans may not have heard of it. (It might be unknown to some older fans too, as it only ran for 45 weeks!)

Anyway, a non-news story in a way, but I found it surprising that such a rare comic didn't attract any attention at all. The same seller has several other old UK comics up for auction at present so if you want to bid on pre-war issues of Knockout (currently at much cheaper prices than Happy Days) and treat yourself for Christmas now's your chance:

Speaking of Number ones.. i'm not doing an advert for it cause 1) I don't realy shop at Sainsburys and 2) I'm kinda sideing with Nigel Dobbyn on what they have done to his art work but.. The Beano 2011 annual has been out for a little while, but if you get it in sainsburys, it comes with a very nice looking reproduction of Issue 1 of the Beano. It's only £5 too.. Okay, I haven't bought it for the reason i said before, but i though it was worth a comment as many people might be intrested in such an item.

Thanks for the info about the bonus item. (My local Sainsbury doesn't stock the annuals for some reason.)

Regarding Nigel, if you're talking about the resizing of artwork it wasn't just his pages. It was the entire book. A last minute change of size meant that there wasn't time to contact the artists so the production dept stretched the pages to fit. ALL of our pages were affected, not just Nigel's. Disappointing but unavoidable. Sometimes these things happen.

Now we have the new sizes we've been able to draw pages for next year's book the correct proportion. I understand Nigel has made it public that he's refused to contribute any more, which is his prerogative. Personally I don't think most readers will notice the pages have been resized.

yeah.. nothing against the guy but he did seam to go a little tiny bit over board.. but that's nothing bad ^_^

and yeah, I did think it was the other art as well. Oh well, Thus is his right

Got to confess the title isn't familiar to me. What killed it ? wartime paper shortages ? (45 weeks from 1938 may just have taken us past September 1939 - depending when it launched)

Did any of the contents survive into other titles ?

Hi Tony, Happy Days ended before WW2 began so I think it was just a case of it not finding enough readers to support it. I'm not sure if any strips carried over anywhere else.

Full colour for only tuppence and it didn't catch on? I would have thought it would have been as much a runaway success as the Halfpenny Marvel was and leave competitors floundering, myself! Oh well.
Or maybe the full colour meant that each issue actually cost more than 2d to produce, and the intention was to get it established then put up the price, but it didn't get established enough? There's many things about those old days of comics we'll just never know, now.

2d was expensive for a comic back then, when most were still 1d. It wasn't full colour throughout, and had less pages than new upstarts The Dandy and the Beano. Perhaps kids thought the tone of Chimpo was too babyish compared to strips in Dandy and Beano. Also, by that time the AP titles were starting to look a bit old fashioned so that may have contributed to putting readers off.

AP would have more success with Radio Fun and Knockout which imitated Dandy & Beano and featured celebs of the day.