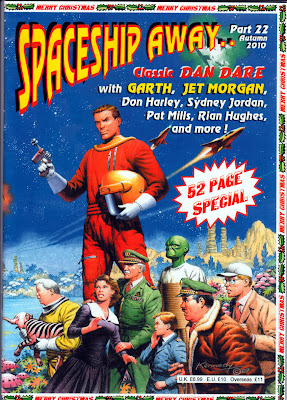 Issue 22 of Britain's thrice-a-year SF comic Spaceship Away was published recently and sadly it's the last one that editor Rod Barzilay will be dealing with. The comic isn't going away though. From next year Desmond Shaw will be taking over distribution from issue 23, although Rod will still be handling back issues. I'd like to take this opportunity to thank Rod for all the hard work he's spent on the comic over the past several years. It's a great achievement that he can be proud of.

Rod certainly bows out with a sensational issue, with an increased content to 52 pages, a wraparound cover by Ian Kennedy, a seven page feature by Don Harley and much more. For me, the Don Harley article was the highlight of the issue, as it focuses on Don's clear recollections of working on Eagle in the 1950s and 1960s, accompanied with the corresponding images that he mentions drawing. There's a few new illustrations by Don as well! 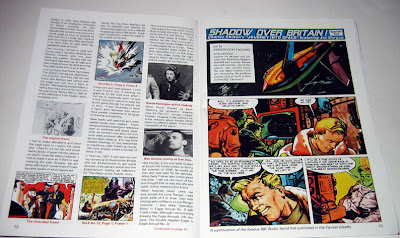 Don's article is worth the cover price alone but there's plenty more besides that adds to the enjoyment of this issue. The long running original Dan Dare serial Green Nemesis reaches its conclusion and artist Tim Booth even supplies a retro Christmas Eagle cover for the final chapter. However, before Colonel Dan can catch his breath there's a new Dan Dare story, Parsecular Tales, starting in the same issue, with a huge 12 pages to kick it off. 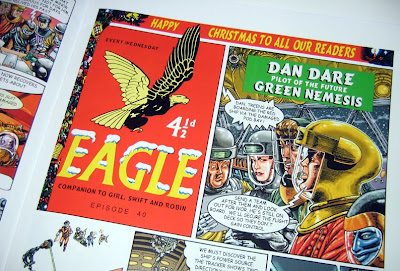 Another serial beginning this issue is Shadow Over Britain! - a Jet Morgan reprint from Express Weekly in the 1950s. There's also an item by Pat Mills on his recollections of working on the Dan Dare strip in the 1980s with a new page illustrated by Gerry Embleton.

If that wasn't enough Dan Dare for you there's a reprint of episode one of the Syd Jordan / Theyan Rich Dan Dare strip from the ill-fated Planet on Sunday newspaper (it lasted one issue!) plus the unpublished artwork to chapters 2 and 3.

There's also a dose of light relief with two strips from the pen of Ray Aspden, Our Bertie and Mikki. Good stuff as always. (For some reason Ray thinks I dislike his work and I've never found out why he would think that. It's good quality work and Our Bertie in particular manages to capture the right feel of a classic humour strip.)

The classic Frank Bellamy Garth strip The Bubble Man continues, nicely coloured by John Ridgway. Sadly the strips have once again been "narrowed" to fit the page proportions which gives a distracting distortion to the artwork. I found myself thinking of the old joke "Why the long face?" whilst reading it.

Add a 1950 Rocket Ship Cutaway by Bruce Cornwell, a brief interview with Rian Hughes, a Mekon's Flying Chair cutaway by Don Harley and Graham Bleathman and an item about current Dan Dare artist Tim Booth and you have a very fine issue indeed. Copies can be ordered from the Spaceship Away website here:
http://spaceshipaway.org.uk/

Lew - The misunderstanding of your attitude to my strips in SA came from an earlier review when you singled out Dan Bear as the pick of the Funnies. As a result I lumped you with those readers of SA who appear to only look at the pretty pictures and don’t read the words. That was unworthy of me and I apologise. There have been acrid comments about my pages because I don’t draw like Frank Hampson, some prime examples were published in issue 3. As a result, after the 4 page tale in issue 2, I was limited to single pages and some good work got spiked. I am, however, self-satisfied that I have the technical expertise to produce self-contained 12 frame stories, while others sprawl across several pages (and issues) with little or no narrative skill. I said when I saw the draft script of Green Nemesis that there were too many characters and not enough settings and the actual pages have confirmed that view. I don’t think posterity will forgive Rod for squandering Don Harley’s swan song on interminable variations of the same scenes. I am the first to admit that my artwork is adequate at best - it’s the ideas that I enjoy, not the grinding execution of them. I think readers were under the impression that I was on Eagle type page rates, whereas the postage on Don’s artwork, with wooden stiffener, to get it hand lettered, probably cost more that I got. The hate/hate relationship between me and the readers spurred me into making the humour opaque to anyone not of the original Eagle generation and thereby familiar with Our Ernie and the Light Programme - you have to be of a certain age to be curious about Digby’s father! Thanks for taking the time to Blog, the occasional inclusion of Radio Fun brings a warm nostalgic glow to this grumpy old man. Ray

Hi Ray,
Thanks for posting and explaining that. Much appreciated.

Yes, I thought Dan Bear was exceptionally good but that doesn't mean I disliked your work. Sorry if that's the impression I gave.

I understand your feelings towards some critics. Sadly some people will always consider humour material inferior to adventure strips simply because it's not realistic. Clearly they miss the point that comics can be in any style. Don't get discouraged.

As for Radio Fun, I've recently obtained quite a number of issues so I hope to feature that comic more often on this blog next year.

Thanks again for writing and may I wish you a happy and creative New Year.

Phew, almost had a heart attack when I saw the words "sadly it's the last one"!
Mind you apparently the Dan Dare licence holders double their fee every year, which is totally unessescary and petulant (from the Dan Dare Corporation? never!). Well unless the original fee was something nominal like £1 but somehow I doubt that.
Personally i love the Our Bertie and Mekki strips, though I have actually heard of Our Ernie (through the fact Sexton Blake once appeared in it) and Round The Horne (being a bit gay helped, mind you).
I also don't understand the large amount of petty bickering and sniping that seems to surround Spaceship Away. Was this not a magazine created to pay homage to The Eagle, started by a vicar? A little more turning of the other cheek ought to be practiced. It must say something for the childrens culture of the 1990's if i can manage it in my own "comic conflicts"