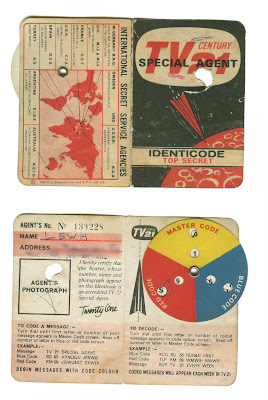 Here's another set of free gifts from comics of past decades, starting off with a well-worn Identicode from TV Century 21 No.1, January 1965. Every week TV21 would run a message in code after each story's cliffhanger (often giving info on the following episode) and one would use the decoder to work it out. A fantastic interactive gift and one that could be used again and again. (Hence its tattyness.) It was such a good gift in fact that City Magazines repeated the idea with a new version in 1968 in the second issue of Joe 90 Top Secret... 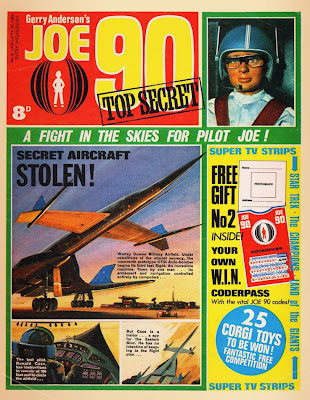 ...and here's the Coderpass gift itself. Excuse the mug shot of my younger self but the pass did specify that "agents" should paste their photo in there, so I did. 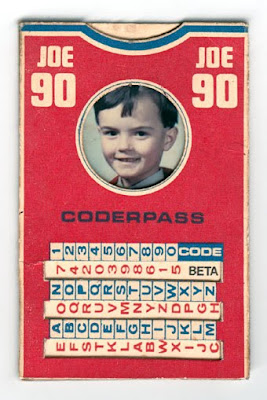 I've shown this gift on my blog before but to save you searching, here once again is the free cardboard Magpie Studio given away with Look-In's very first issue in early 1971. (Magpie was ITV's rival show to Blue Peter, in case you were wondering.) 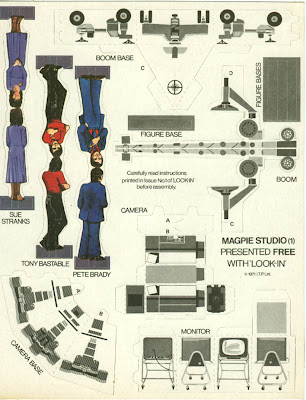 Issue 3 of Look-In gave away the Starwheel, another simple but interesting cardboard gift. Rotate the wheel to see a photo of a tv star in the window and on the reverse the indicator points to a brief CV. Nothing that couldn't have been featured as a series of picture cards instead, but this was more fun. 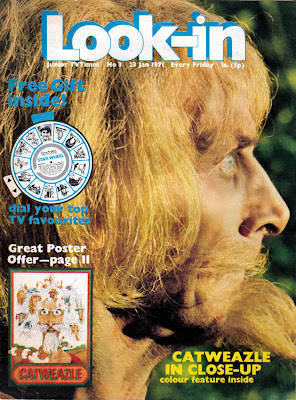 Hard as it is to believe today, free gifts were extremely rare in The Beano 40 years ago, but in 1971 it gave away the Humming Birdie. Variations of this toy have been seen in comics many times. Basically it's a flat cardboard and rubber band design, fixed to a thread, which vibrates a humming noise as you swing it around your head. 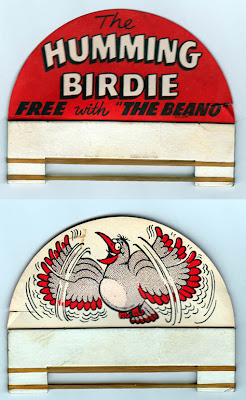 1973 saw the launch of Marvel UK's second title, spinning off from The Mighty World of Marvel. The new Spider-Man Comics Weekly boasted a free Spider-Man mask inside, but it was literally a paper bag with eye holes cut into it:

Issue 2 of Spider-Man Comics Weekly gave away The Spider-Man Tracer Plane which you could fling across the room: 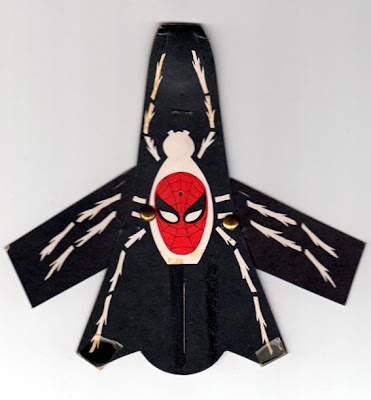 Later that same year (1973) Marvel UK launched their third title, The Avengers, giving away a traditional cardboard pistol in the second issue: 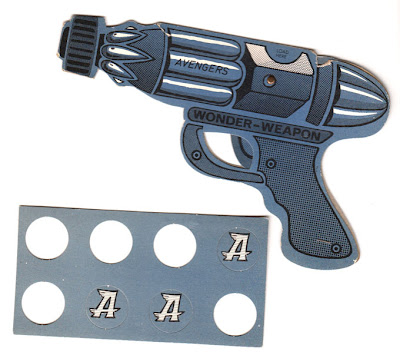 1973 also saw Tiger present a free gift that was very similar to the Look-In Starwheel of two years previously. Tiger's Stars of British Sport was in full colour though, and encouraged readers to keep buying the comic so they could cut out autographs to glue onto the reverse of the gift. As you can see, I wasn't impressed enough to do that, as I probably dropped Tiger in favour of the Marvel UK weeklies by that point.

In 1975 D.C. Thomson's new Cracker weekly gave away the Wheels and Squeals 20 page booklets. The concept was identical to the Broadway Books I showed in Part 1 of this feature, that Thomson had given away in 1930. The idea was to cut across the middle to have two books, but as I was 16 when I had this gift I didn't bother and the books are still intact. 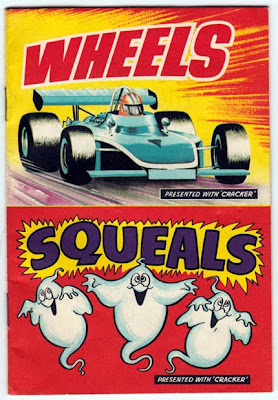 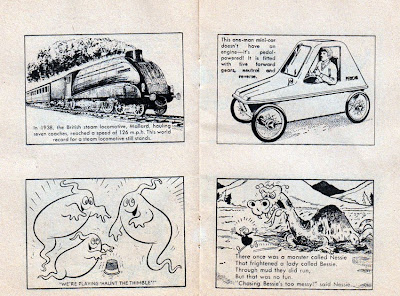 Here's the back cover to the Wheels and Squeals booklet: 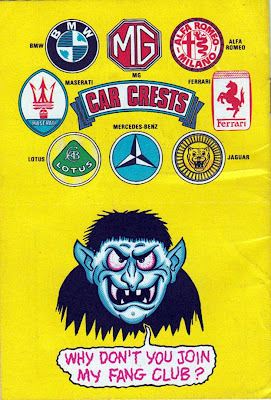 My Captain Britain boomerang never came back. It whizzed over the hedge and into the field next to my parents' house. I think it was the third time I threw it. Such is life...

I still have the free send away Catweazle poster from Look-in magazine in a frame. Must be worth something by now !?