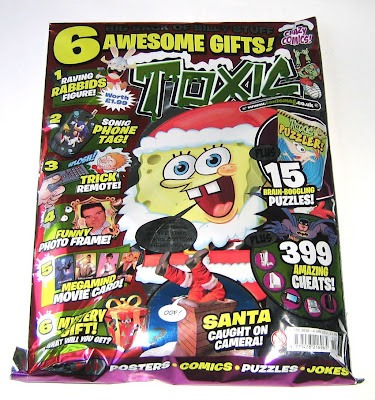 Here's how the Christmas issue of Toxic looks this year; all sealed up in a foil bag with six free gifts for £3.99. A potential stocking stuffer if ever there was one.

Then again I'm a tad biased as inside the mag there's an all-new four page Team Toxic story written and drawn by me. Here's page one, prior to the word balloons being added: 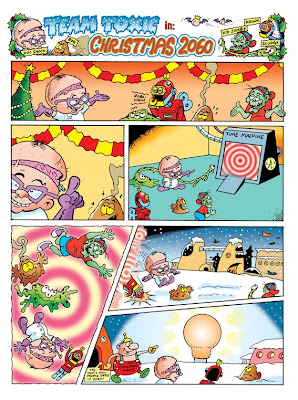 Toxic No.176 is out now in newsagents and supermarkets across the frost-bitten land.

Apologies for the delay of the final part of the Free Inside features. I'm busy on Toxic stuff over the next few days so expect to see it sometime next week.

(and unless i've missed some) I couldn't see any Whizzer and Chips Christmas covers amongst the others,

just wondered if you have / or will be posting any up sometime?
Thanks :-)

You must have missed Part 3 Peter. The very first W&C Christmas cover is here:

Hello Lew, this is my first time of buying the Toxic and I must say I wasn't extremely impressed... My first problem was the horrible white health and safety box on the front cover, why does this comic do this, other comics don't... My second problem was that I was hoping for some more comic strips, usually I read the comic in the shops (when it's not in a bag) and I see there's quite a few comic strips in there... Team Toxic, Robin Hoodie, Rex, Pig brother to name a few, but all there was, was a fantastically drawn Team Toxic 4 pager, an all too short Robin Hoodie and some boring adventure story about Zoikz, whatever they are... I found the cheats quite helpful but most of them I already knew... A nice variety of free gifts though... I liked the magnet, the phone charm and the Raving Rabbids figure... Team Toxic however was fantastic! Fantastic artwork Lew! Good story as well. Robin Hoodie was once again a great strip but I felt it was too short... I was looking forward to reading Rex so I was a bit miffed when he wasn't in there... To be honest, being more of a comic strip fan, I'd of liked more comic strip content, maybe a bit of Jamie Smart in there perhaps... I read on the blog something about a comic strip competition in the Toxic they had, maybe have some of those characters in the comic... I think what I disliked most was all the kids TV references, It would of been alright if perhaps they were converted into comic strip form... Anyway, it seems to do well exactly how it is now so maybe I'm completely wrong, but I'd like it more as a children's comic, we need more of them on the market since comics have began to disappear...

Thanks Harry. Much appreciated.

Yes, I'd like to see more strip content in the mag too. It's a budget thing I think, plus they know that the current format works. That said, readers do like the comic strips so it would be good if it could be increased.

Jamie Smart has worked for Toxic in the past.