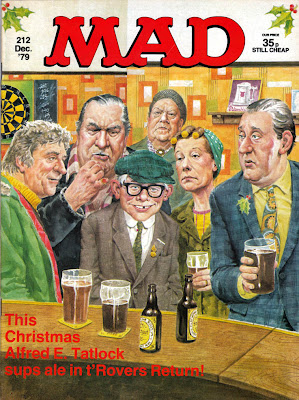 Tonight marks the 50th anniversary of the first episode of Coronation Street, and new producer Phil Collinson, having previously worked on Doctor Who, is marking the occasion by having a full scale Dalek invasion in Weatherfield, or something like that. Oh, the humanity. 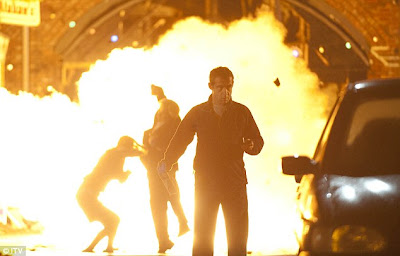 Therefore I thought it'd be appropriate to show this Christmas issue of Mad magazine from December 1979. Back then the American Mad was a 52 page comic appearing 8 times a year, and the British edition was a 36 pager appearing monthly. Obviously there had to be a few pages of new material generated for the UK edition in order to fill the pages. This Coronation Street spoof was one such idea, created solely for the British edition and never published in America.

The writer was Les Lilley, a Southern-born prolific contributor to newspaper gag cartoons and comics who had been the scriptwriter on Tin Teacher for Buster and the later Wham! and Smash! annuals and the main contributor to Oink! imitator TV Help.

However in regards to the Coronation Street spoof, well written though it is, I've always wondered if he had even seen an episode of the soap. The characterization of the residents is completely off. Would Hilda ever get a huge round in? Would Stan ever call Fred Gee "Fredluv"? Did Ena ever flirt with Albert Tatlock? Perhaps it's intended to be funny because they're acting out of character but surely good satire has to have elements of truth?

Luckily the artwork saves the day. Harry North captures the likenesses perfectly, and his caricatures are a joy, as are the details he's crammed into the pages. 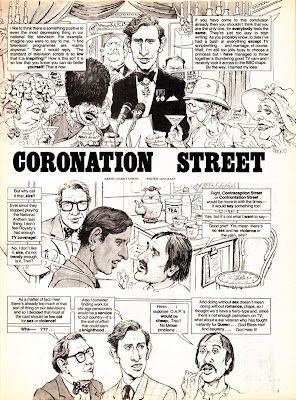 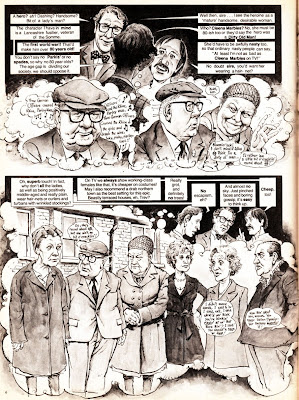 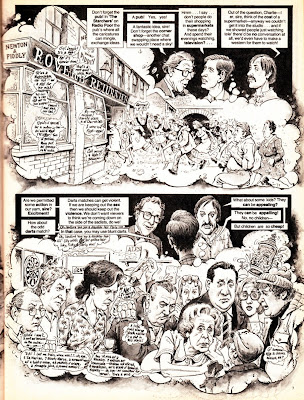 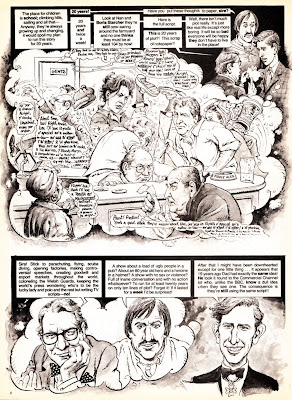 Thanks for this. This is great.

"Oh the Humanity" is a quote from radio reporter Herbert Morrison commenting on the tragic Hindenberg zeppelin disaster.It's hardly laughing matter is it?

I think 'Coronation Street School' in School Fun in teh early eighties did a better job. I certainly enjoyed it. After all Stan and Eddie were just a couple of naughty school boys.

Lew - Editor Ron Letchford never liked Less raw script, but claimed to be too far down the line in production of the issue to have anything done about it. Artist Harry North claims to have contributed a lot to the writing (probably including the stuff in his own handwriting). BTW, the EastEnders spoof circa 1985 is worth a look - cover by North, interior script and art by an upstart named Robinson - Thanks - Dave Robinson, British MAD (1978 - 1992)