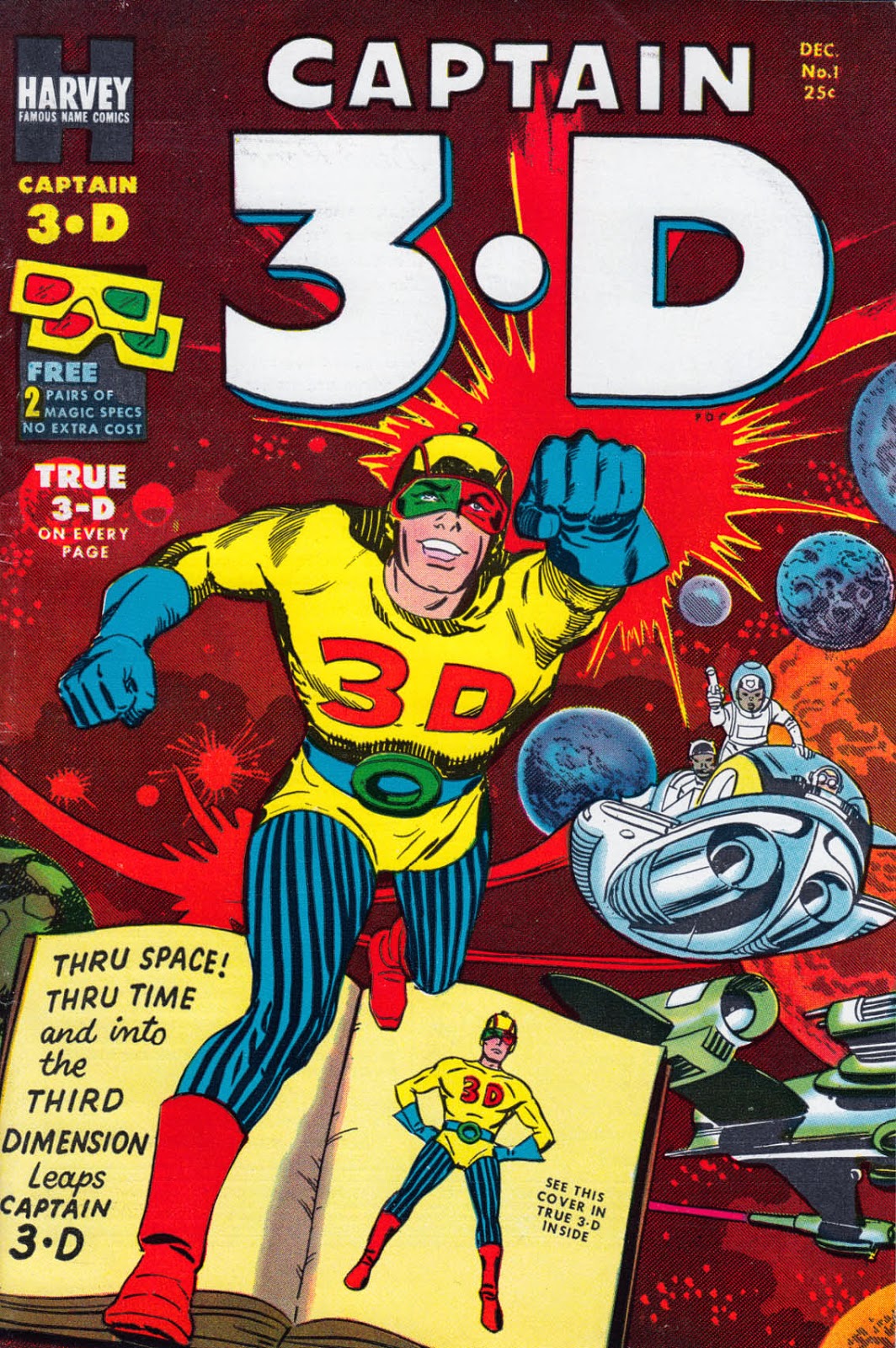 Here's the final part in the pre-code covers of American comics scanned from my collection. I know opinion has been divided on this diversion from British comics but I'll be returning to UK comics again with the next post.

Above is Captain 3-D No.1, December 1953. Harvey Comics. Produced by Joe Simon and Jack Kirby to capitalize on the 1950s 3-D craze. Interior strips printed in green and red for an effective 3-D effect when viewed through the free 'Magic Specs'. 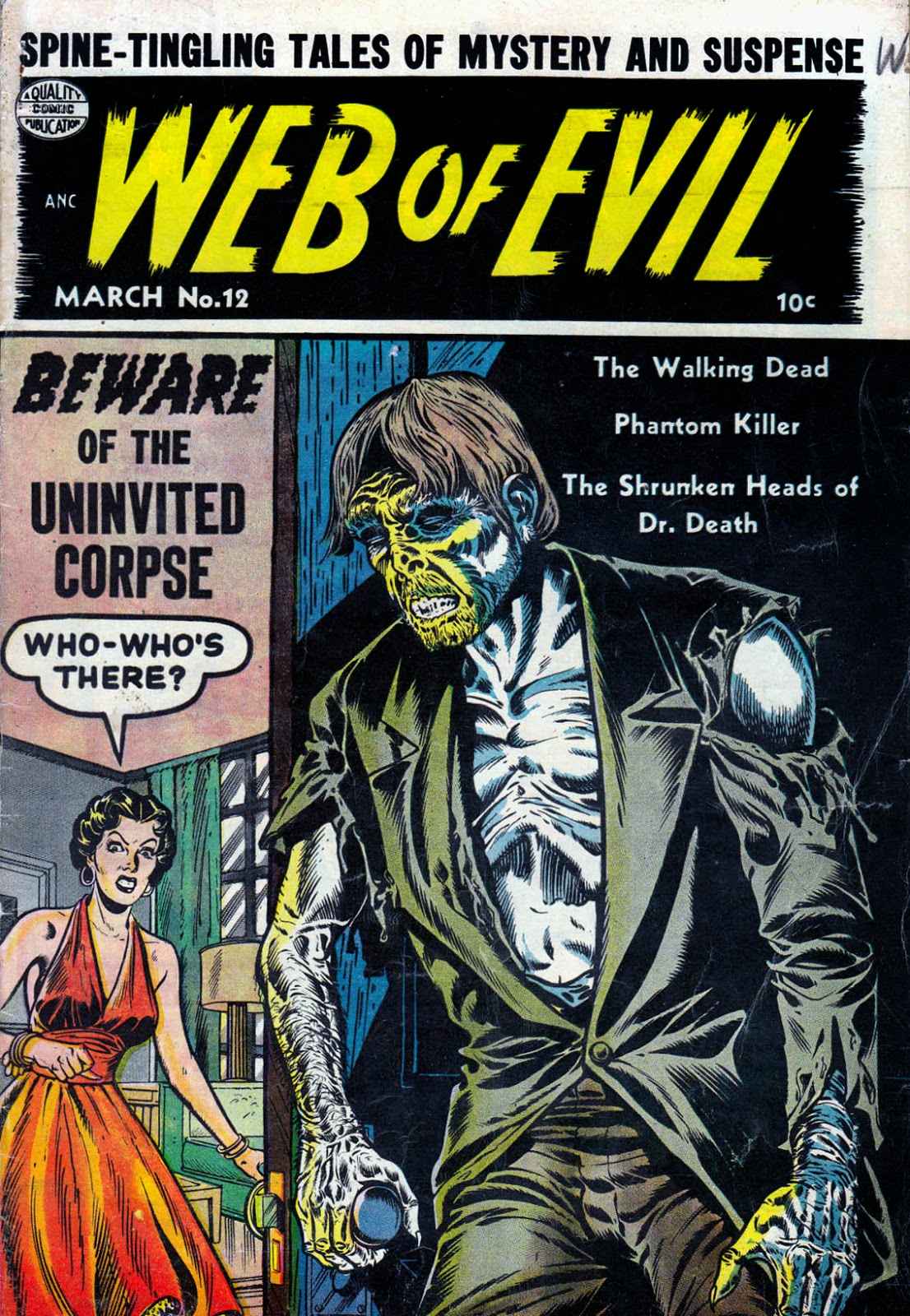 Whack No.3, May 1954. Jubilee Publications. One of the many Mad imitators of the period. Police Action No.4, July 1954. Marvel Comics. Yet another of Marvel's many crime titles. 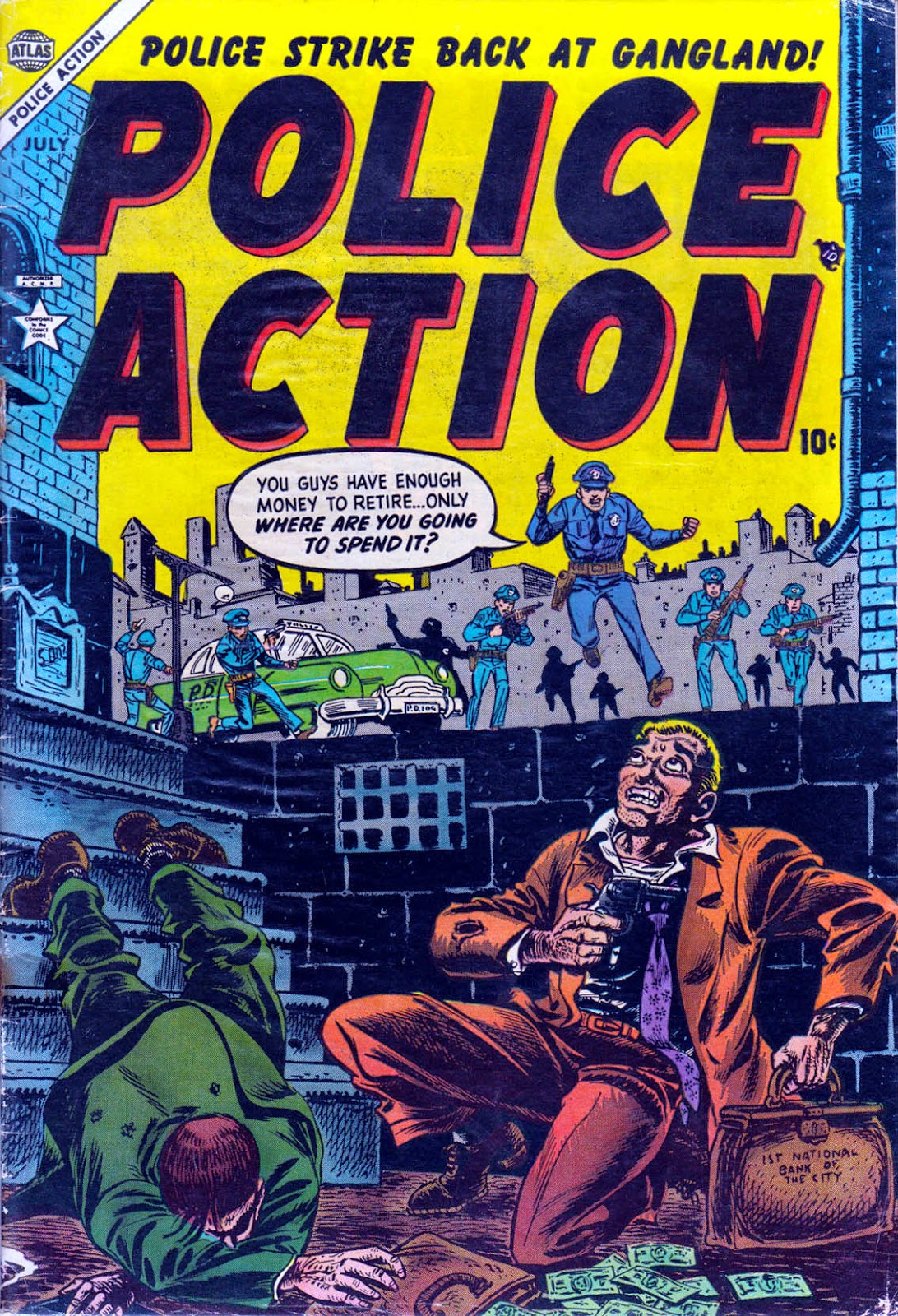 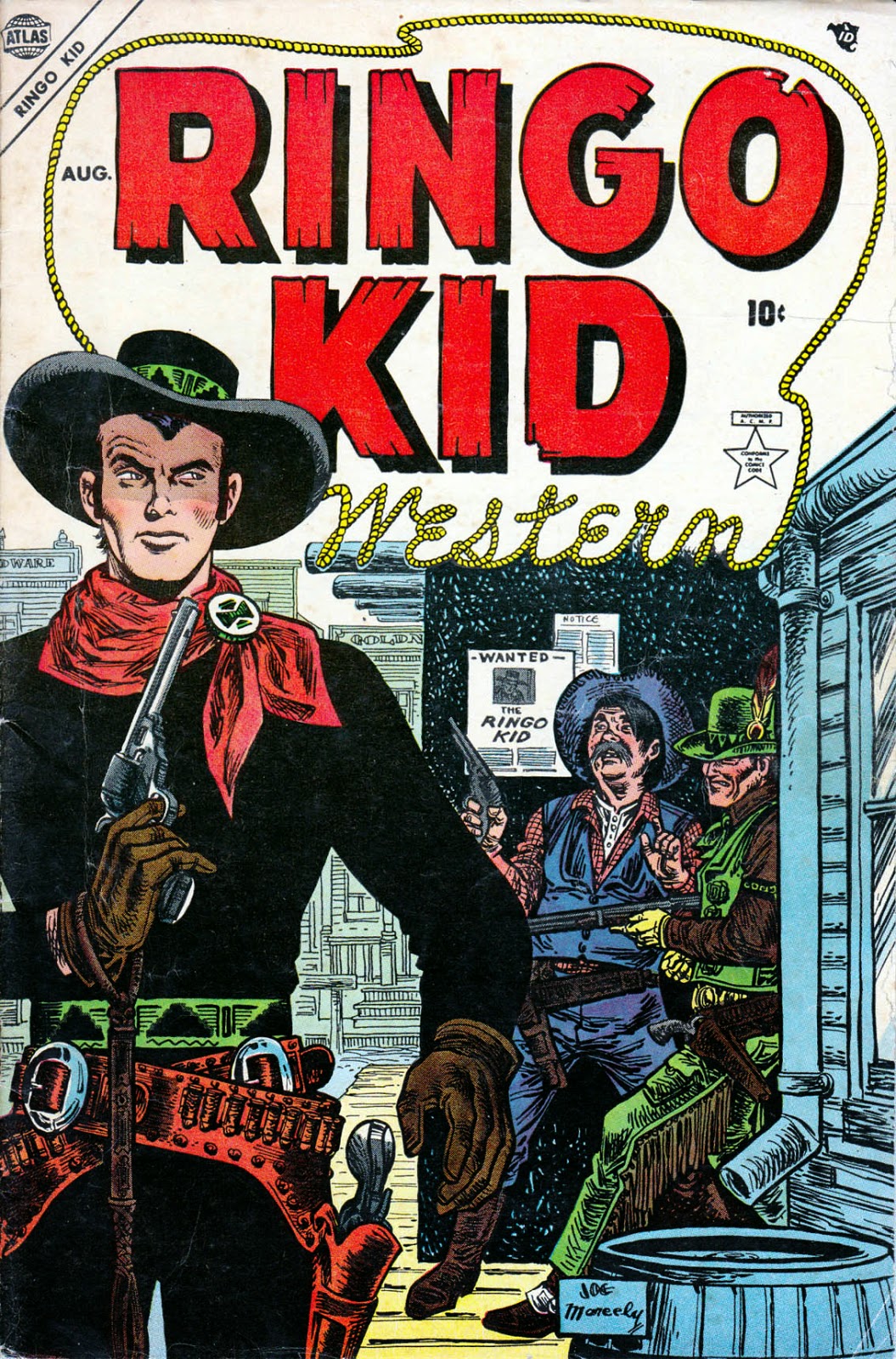 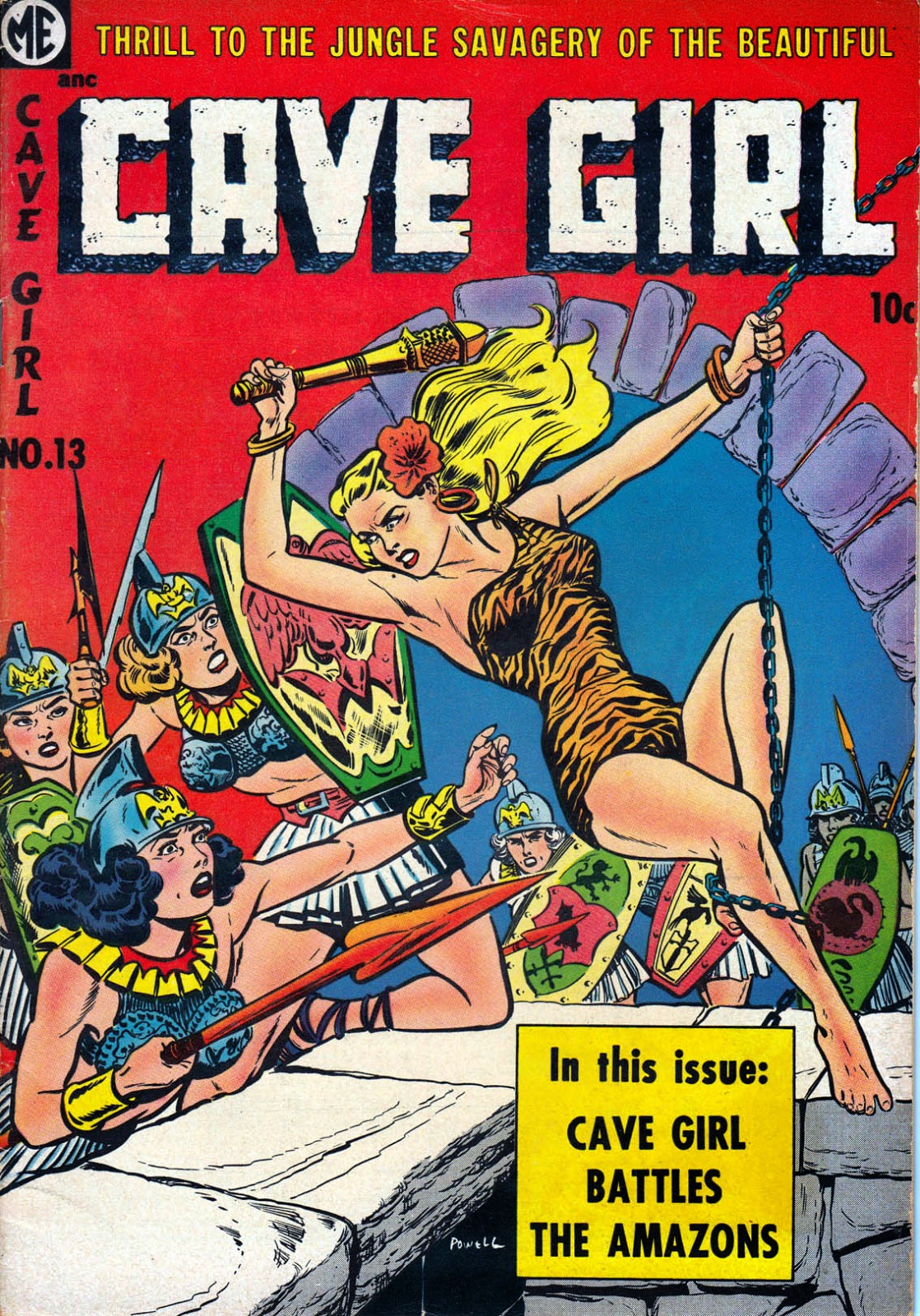 Wild Western No.38, November 1954. Marvel Comics. Another great Joe Maneely cover showing action from all four strips in the comic. 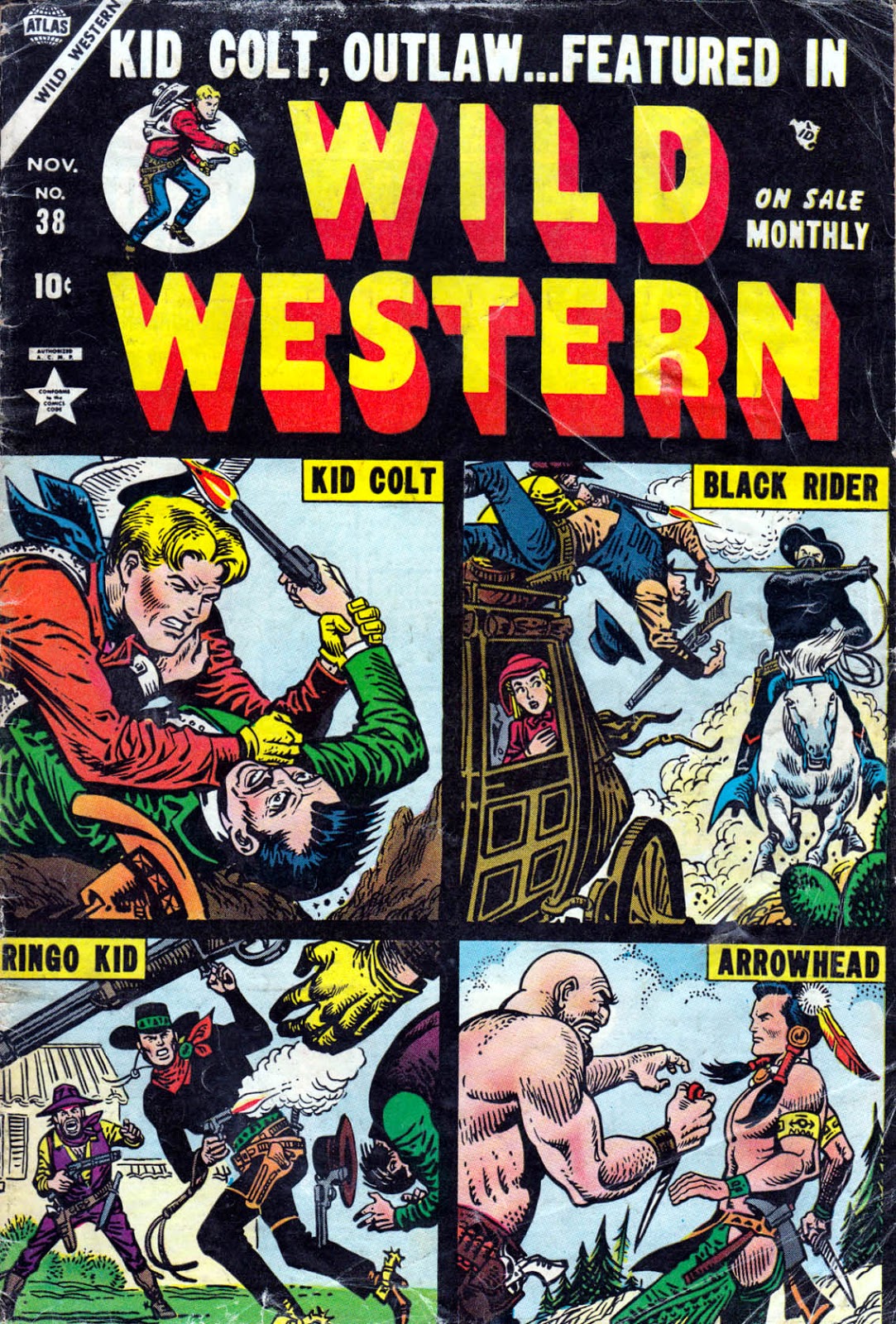 Black Rider No.25, November 1954. Marvel Comics. Yet another excellent Joe Maneely cover. (Yes I'm a fan of his work.) Sadly Joe's life was cut short in a fatal accident in 1958. 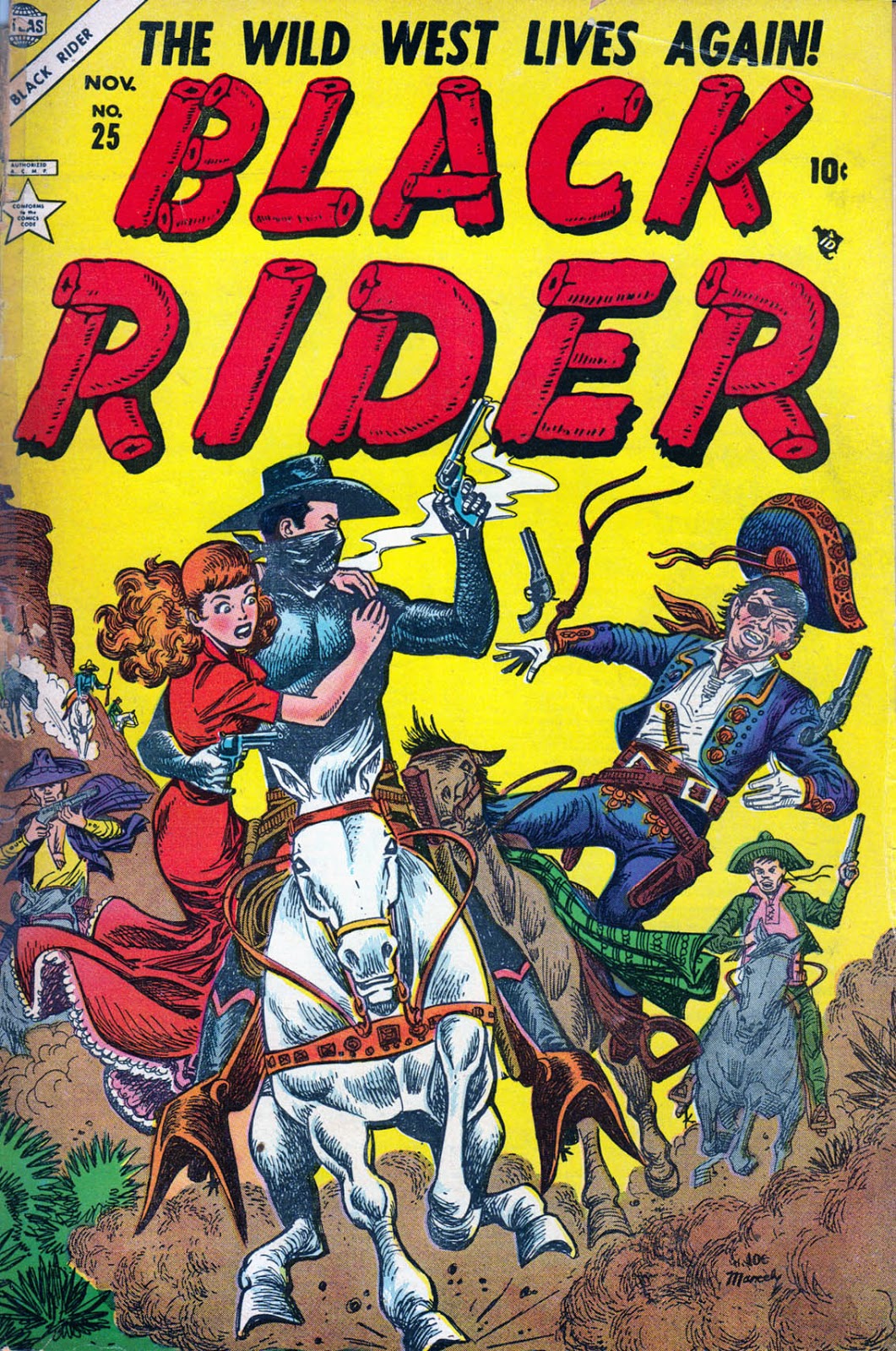 Crimes by Women No.54. M.S. Dist. Actually a reprint of a 1940s comic, running strips about female criminals. More like crimes against women, judging by the cover. 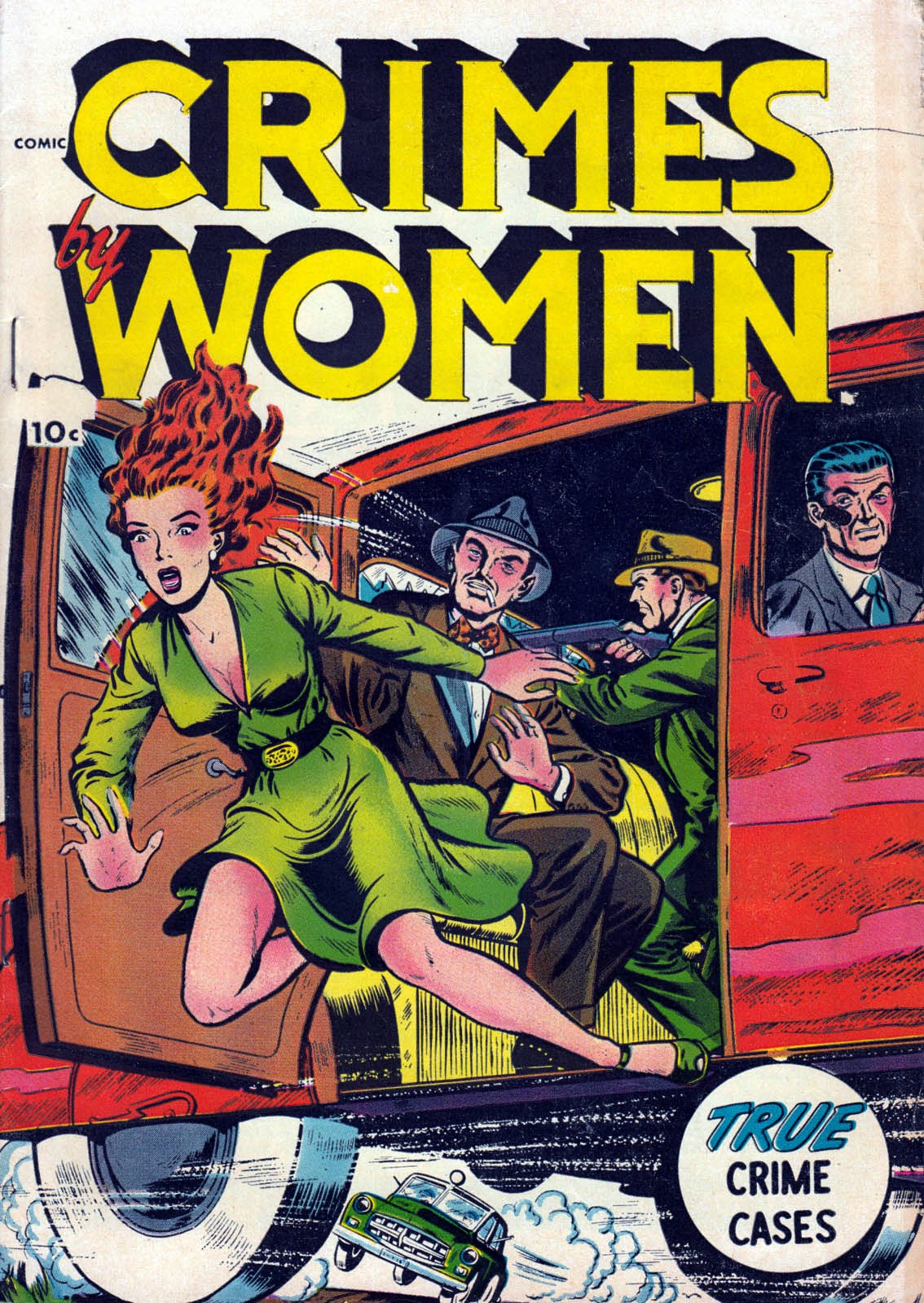 Panic No.6, January 1955. EC Comics. The storm clouds against comics were gathering and the inevitable censorship was coming. EC spoofed the situation with this famous cover to their sister comic to Mad. 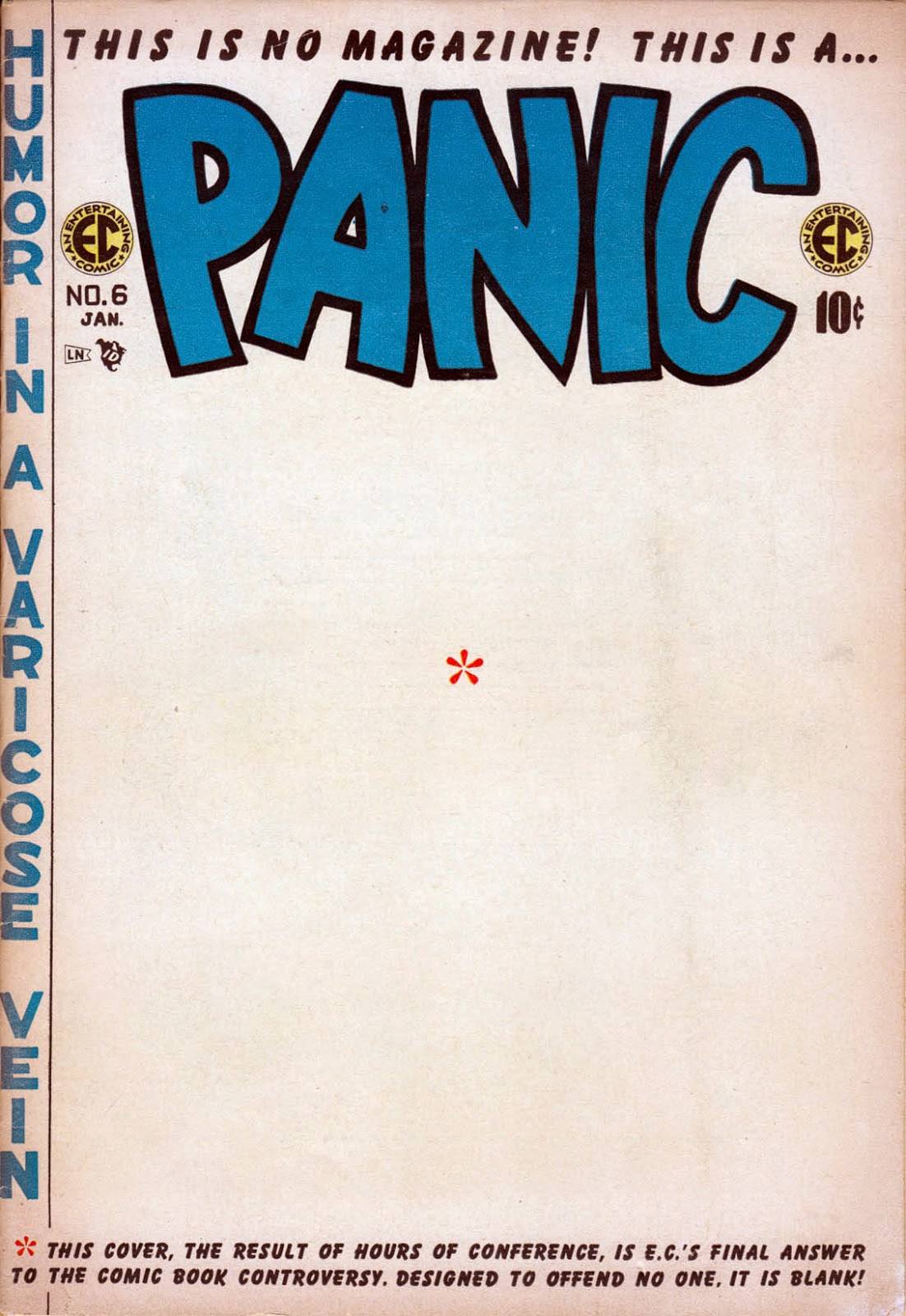 ...and that's yer lot. I hope you've enjoyed these last four posts looking at classic comics from across the Atlantic. If you're interested in seeing what sort of strips were published 60 plus years ago I can highly recommend the following two titles from Yoe Comics/IDW. Haunted Horror and Weird Love are published on alternating months. Each have 52 pages on quality paper, all in fill colour, scanned from the actual 1950s comics. (With a fantastic restoration job. No digital recoloring or redrawings/tracings by modern hands.) Priced at only $3.99 each, which works out at around £3 an issue depending on supplier. You'll find them in specialist comics shops. 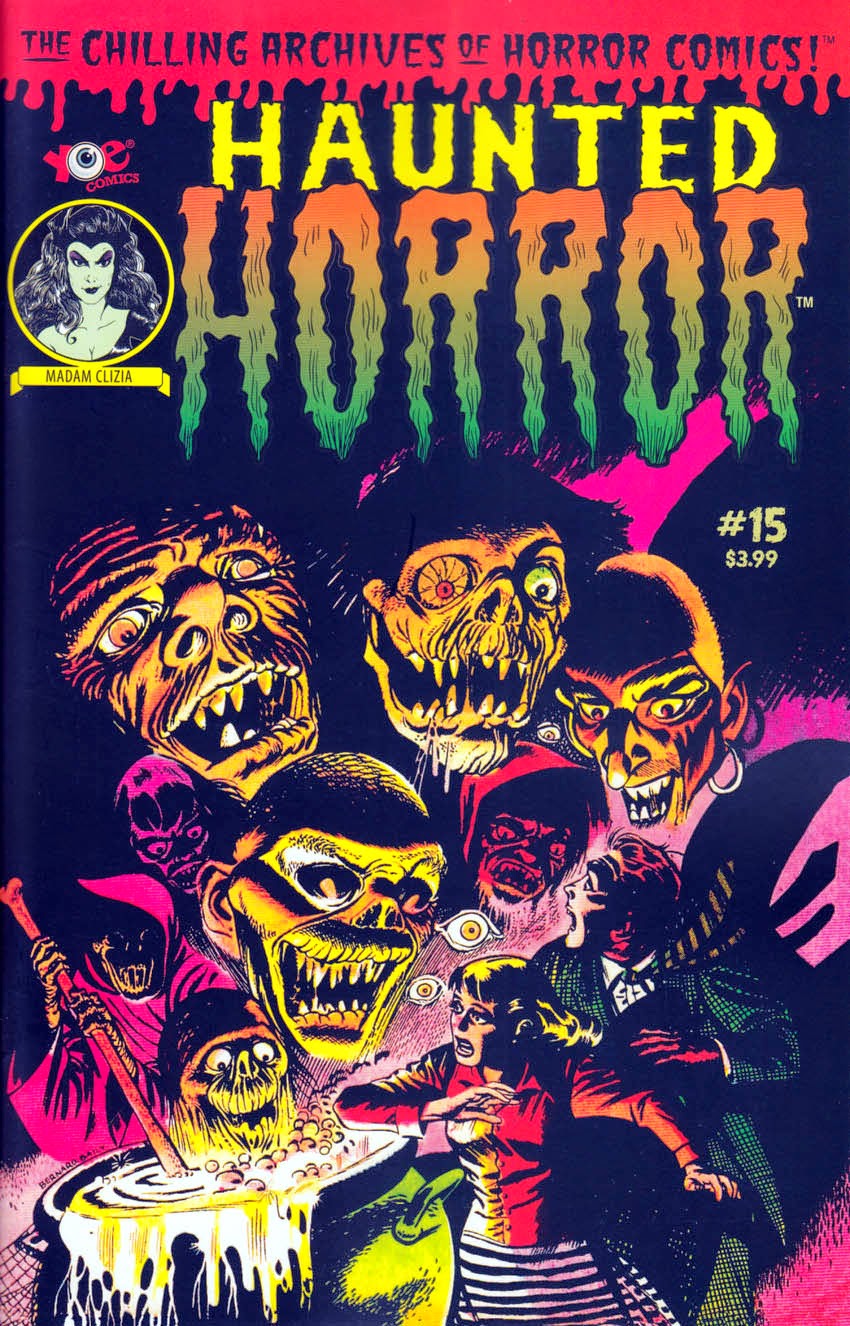 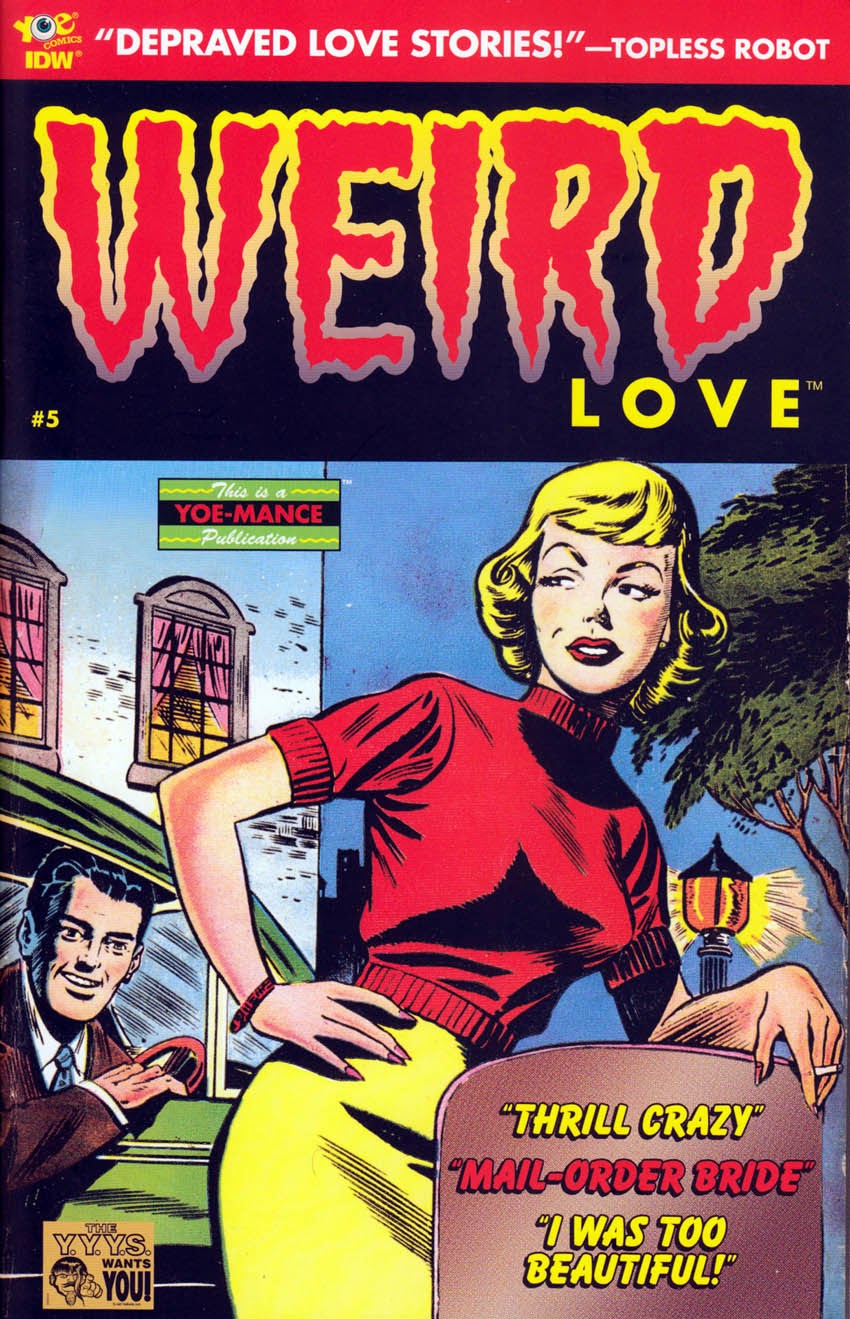 Craig Yoe and his team who produce these reprint comics have also published numerous books on comics of the golden age and more. All of them are lovingly produced and superbly presented. Check out the website here:
http://www.yoebooks.com/

Great series, Lew. But I've got to ask,
"Got any pulp magazines?"

I have a few, mostly from the 1950s. I doubt I'll post scans though as this diversion into old American comics has seen quite a dip in visits to the blog.

That is a shame ,Lew. It's nice to mix it up with comics and artwork from throughout the world .

Some collectors have specific tastes. This is a blog about British comics so it attracts fans of UK comics, and some of them have no interest in American comics, or they're only interested in comics of their own nostalgia.

Personally I like all comics. The only reason I've dedicated Blimey to UK comics is that there were so few sites covering them and I felt that the history of British comics needs to be kept alive. There have been a few more UK centric blogs spring up since I started, but it's still American-focused comic sites that dominate. I guess anyone interested in 1950s pre-code comics may have already seen these covers elsewhere, but I thought I'd scan my copies as nice big images just in case they hadn't.

It'll be back to British comics again with the next post.

If you knew this was a blog for British comics why did you upload scans of American comics? I come here to rekindle memories of good old British weeklies of my childhood. I'm not remotely interested in Yank comics or the new Thunderbirds.

As I said Sam, I thought it'd add some variety. I think it's a shame when collectors are only interested in their own nostalgia. Also, how do I know what your nostalgia is? Visitors to this blog include people from their teens to 70 year olds, plus people who are actually interested in comics from before they were born so I try to please everyone.

Is that so? I' m sorry to tell you that this blog hasn't pleased me for a while.

Yes troll. I've been bald for 35 years and never tried to hide it, so puerile comments like that ceased to have any effect long ago.

Hiya Lew, I found the Digital Comic Museum on line earlier this year, there's a lot of 1940/50s comics on there, including Jack Kirby's Captain 3D, (http://digitalcomicmuseum.com/preview/index.php?did=25471). Dug out a pair of old blue /red lensed 3d glasses from an ancient cinema trip and was able to read the comic on an ipad. Lots of different publishers are covered, I'm a great Kirby fan so was delighted to find some comics I hadn't seen before. Pity there isn't an equivalent for old bitish comics.

Yes, that's a good site, Steve. All of those comics are out of copyright apparently so that's why they're up there. Not the same case in UK comics as I understand it. One day though...