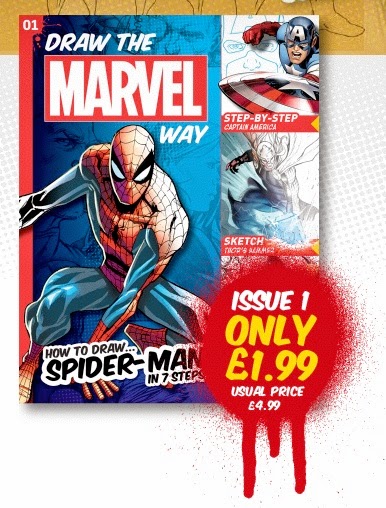 Hachette Partworks have launched a new magazine for aspiring superhero artists. Draw the Marvel Way is a fortnightly partwork filled with professional drawing tips and tutorials (by Mike Collins sharing his 30 plus years of experience as a comic artist) and accompanied with various tools of the trade.

Some might complain that it's teaching people to draw in a limited stylized way, but anything that encourages the art of drawing is welcome in my opinion. What I do find curious though is that issue 2 will come with an art box to store a collection of water colours (given away a few at a time in future issues). Colouring in comics (especially Marvel) is done digitally now, so this seems quaintly old fashioned for the purpose of this particular partwork. However, it can't do any harm to teach the old style of applying colour I suppose. Besides, bagging the mag with a Photoshop disc would push the price up a few hundred quid. As is the norm with most new partworks, Draw the Marvel Way is only being tested in selected areas at the moment so chances are you won't find it in your newsagents. If anyone knows the area it's being tested in, please let me know. It if proves successful I'm sure it'll be relaunched nationally.

To find out more, visit the official website here:
http://marveldrawing.hachettepartworks.com/
Posted by Lew Stringer at 15:58

This looks like the kind of partwork I'd really enjoy. Can't see it being available here in Northern Ireland until (or if) it gets a full release, though.

Yes, and if it does get a nationwide relaunch it might not be until later in the year I'd guess. Still, all the other Marvel partworks proved to be very successful (some continuing beyond their planned run) so it stands a good chance.

perhaps instead of photoshop it could be bagged with something open-source like Gimp?

Possibly, although Photoshop is the industry standard. However it looks like they'll stick with using watercolours. Perhaps if the magazine is really successful they'll move on to tutoring digital colouring later.

Hi Lew. I'm in Bournemouth and it's available in local newsagents and WH Smiths down here.

Apart from taking the name from an interesting old book.. Oh goody! I can Draw like Greg Land!

but anyway.. Refernce books are useful, so hopefully for this to be any good, it'll show a RANGE of Marvel Artist styles from Dikto to Kirby to Hembeck.

What makes you think Greg Land is involved with this? As I said, Mike Collins is doing the tutorials.

Which is no problem, the point was more to do with the fact that drawing the "Marvel Way" is mostly a matter of artist and I would expect it to include a range of who Marvel class as there big artists over the past XX years. Mike Collins is a fair enough artist that I'm sure can do a good job.

I think drawing 'the Marvel way' mainly refers to the dynamic figure work and page compositions etc, not slavishly following one artist's style.

Don't worry, as well as my basic how-to pieces, there's examples of other artists work and how they approach their material. There's spotlight articles on key creators, so it should make for a great overview of how to and (sometimes more importantly) WHY to do things certain ways.
It's an old saw but, to break the rules you first need to know what the rules are :-)

There you go, Manic. Reassurance from Mighty Mike Collins himself. Thanks Mike!

Yep! Perfect ^_^ might even pick up the first issue or so

How many issues are there to collect

I don't know, sorry. What sometimes happens with these partworks now is that if they're really popular they go beyond their original plan of issues. The Marvel Fact Files for example.

Well, I'm still drawing new workshops and how-to character shots for the mag, so I assume it's still got a way to go :-)

The website says 100 issues.... although I have to be honest Im considering canceling my subscription as its getting repetetive.... was hoping the book would be covering page layouts etc

i have got every issue to date as of august 2017 i agree with darren price the issues are repetitive maybe from issue 50 it will show us all different aspect of drawing focus on other things then superheros i was disappointed when the finished superhero wasn,t finished in watercolour instead of photoshop and the colour,s for reference are vague in the magazine it,s if they think your some kind of artist instead of a novice who is trying to learn how to draw