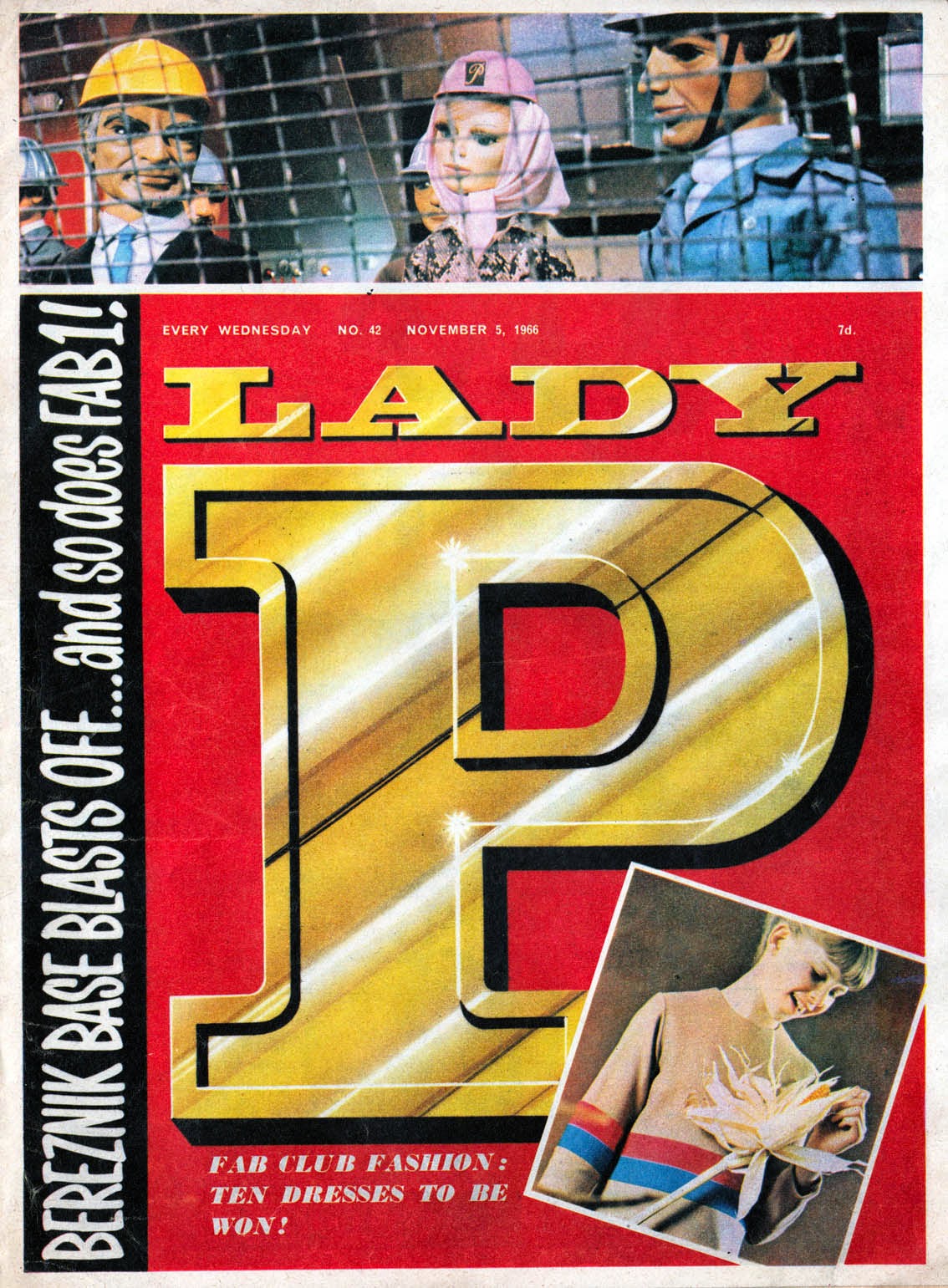 Lady Penelope was a pretty cool character for a puppet, and her comic equally so. Take a look at the cover to Lady Penelope No.42 above, dated November 5th 1966. Its companion comic TV21 often played around with its own logo but never to this extent. A gigantic Lady P logo dominates the cover, even dispensing with the comic's full title that week. (The words 'Lady Penelope' usually ran alongside the logo in the left hand corner.) I don't recall any other comic being as experimental with its cover as this in the 1960s. Also, when you consider that this comic was the size of a tabloid newspaper you can imagine how eye catching it must have been.

For its target audience of young girls, Lady Penelope must have seemed like the most modern and 'with it' comic they'd ever seen. Its contents were pretty groovy too. On pages 2 and 3, was a strip featuring The Monkees drawn by Tom Kerr. The artist's work was as superb as ever but what's interesting here is that he added little items to the strip in the way that Bill Elder had with Mad a decade earlier. Note for example the UFO in panel three, and the man hanging from the panel border in panel seven. 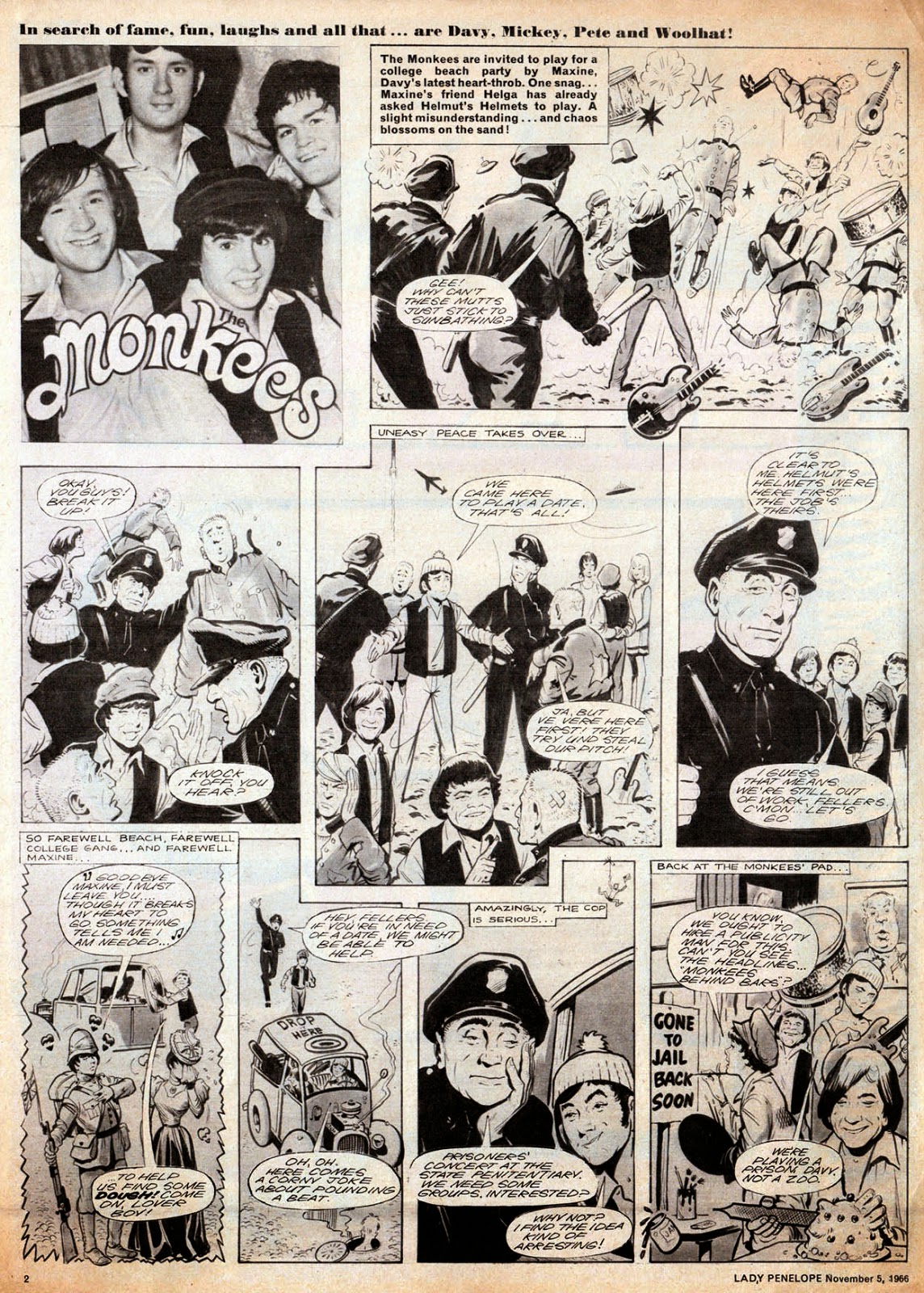 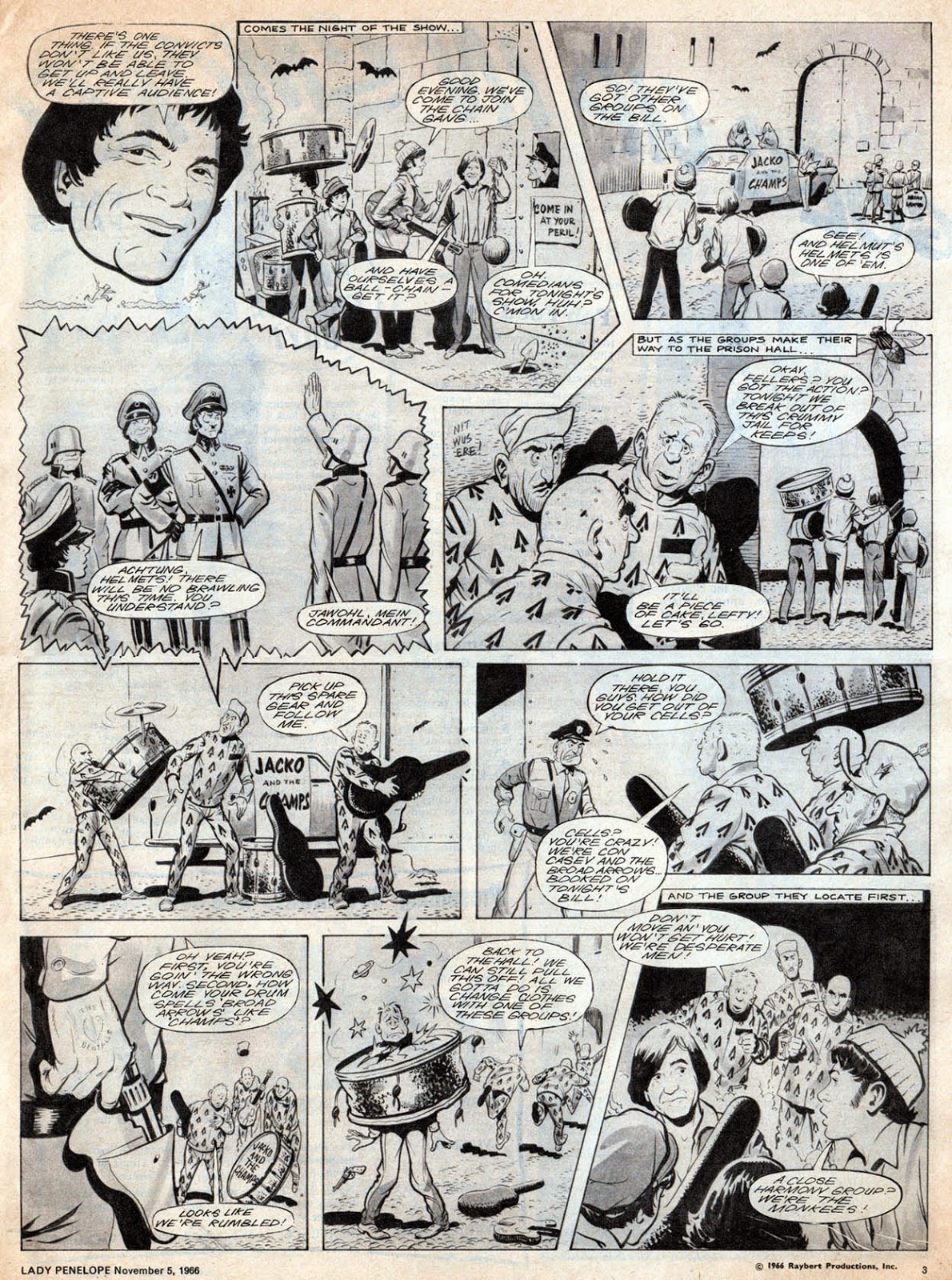 Lost In Space was a popular TV show at the time about the Robinson family trapped on a distant planet. Lady Penelope had a Space Family Robinson strip but this had no relation to the TV series. It was instead based on the American Gold Key comics, but with brand new stories for the UK drawn by John Burns. 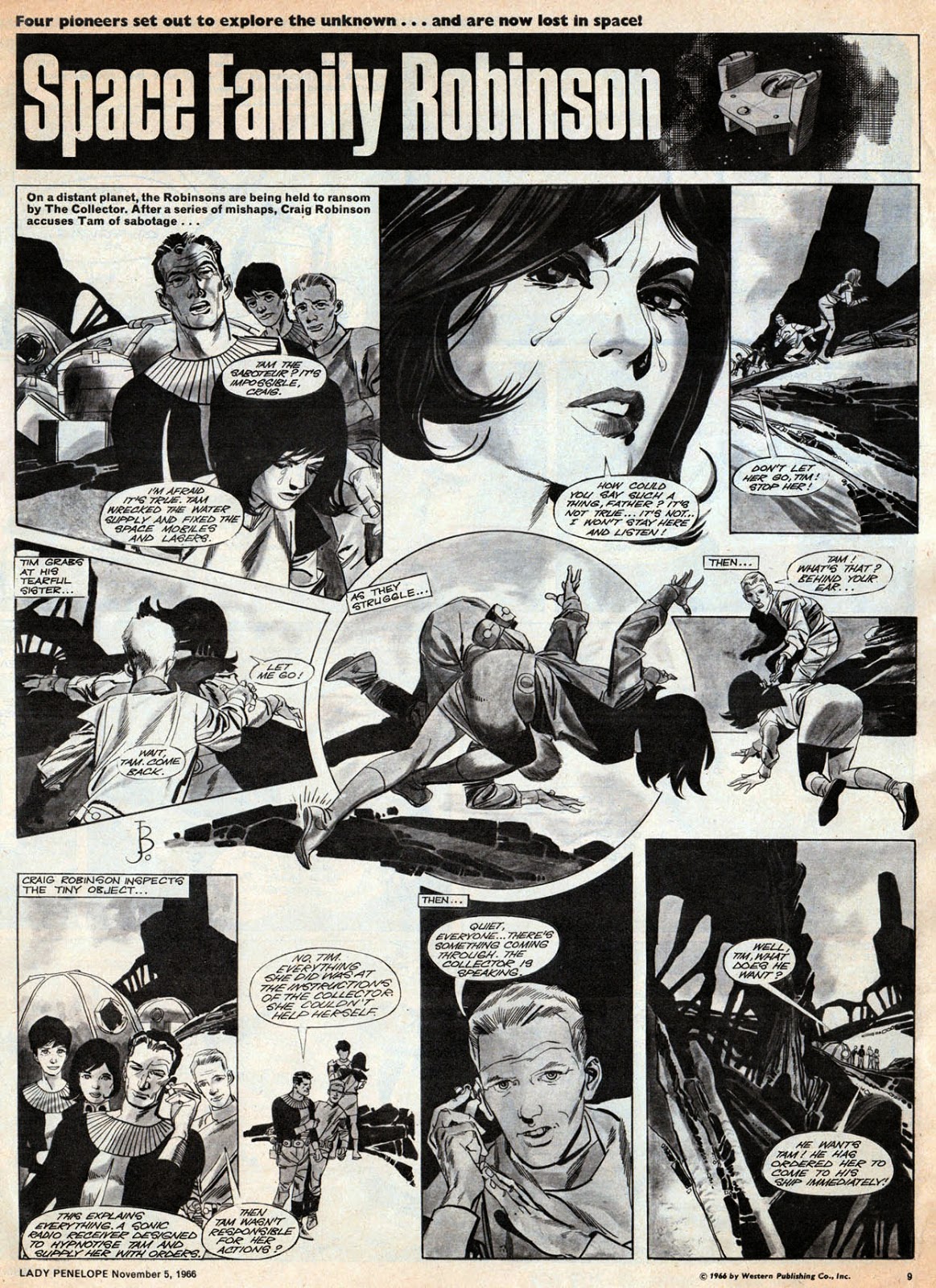 The Lady Penelope strip itself ran across the centrespread in the sort of glorious full colour only achievable by the expensive photogravure printing of the time. Artwork by Frank Langford. 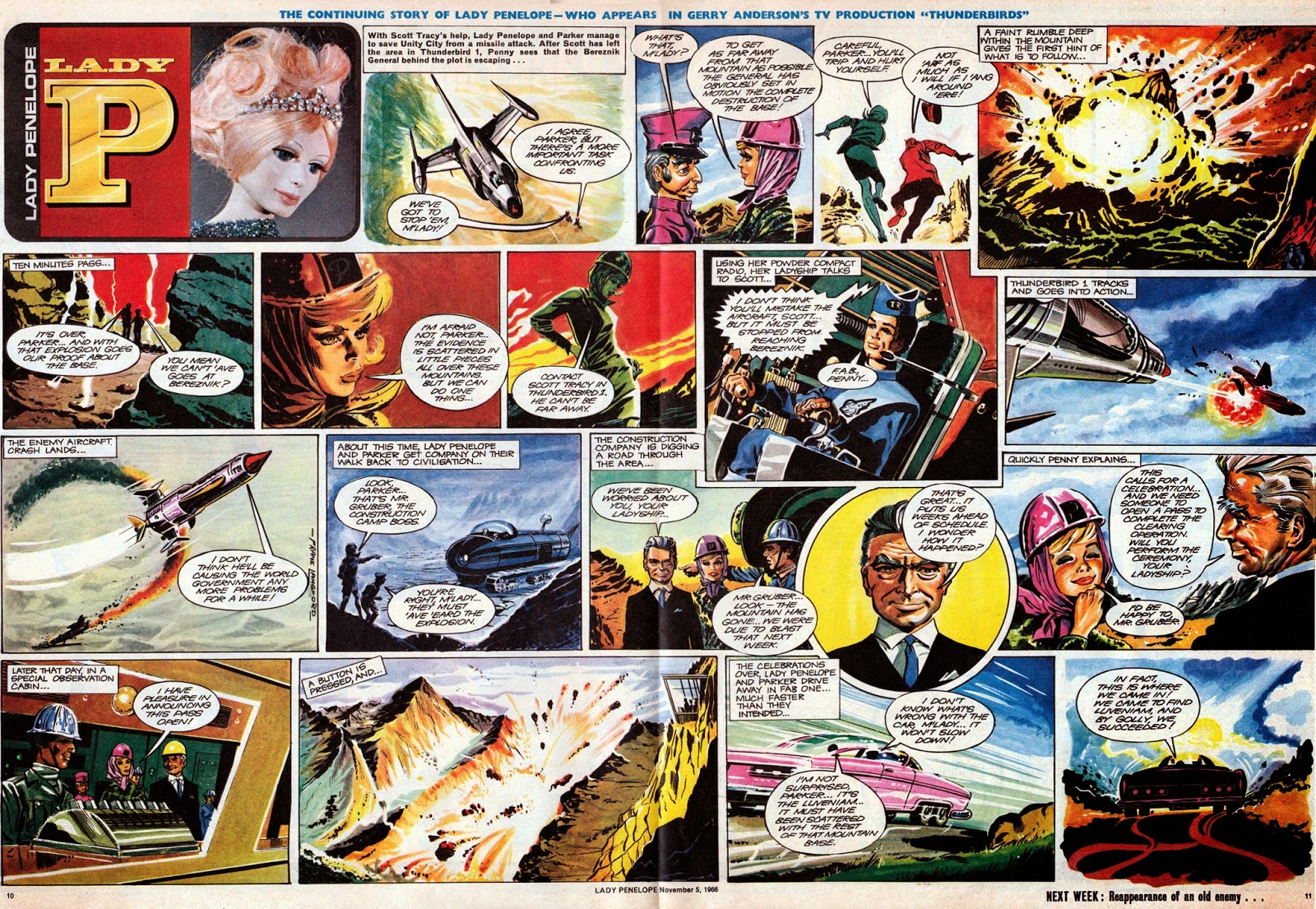 The comic certainly employed some top class talent. Ron Embleton delivered fine work as the illustrator of The Man from UNCLE... 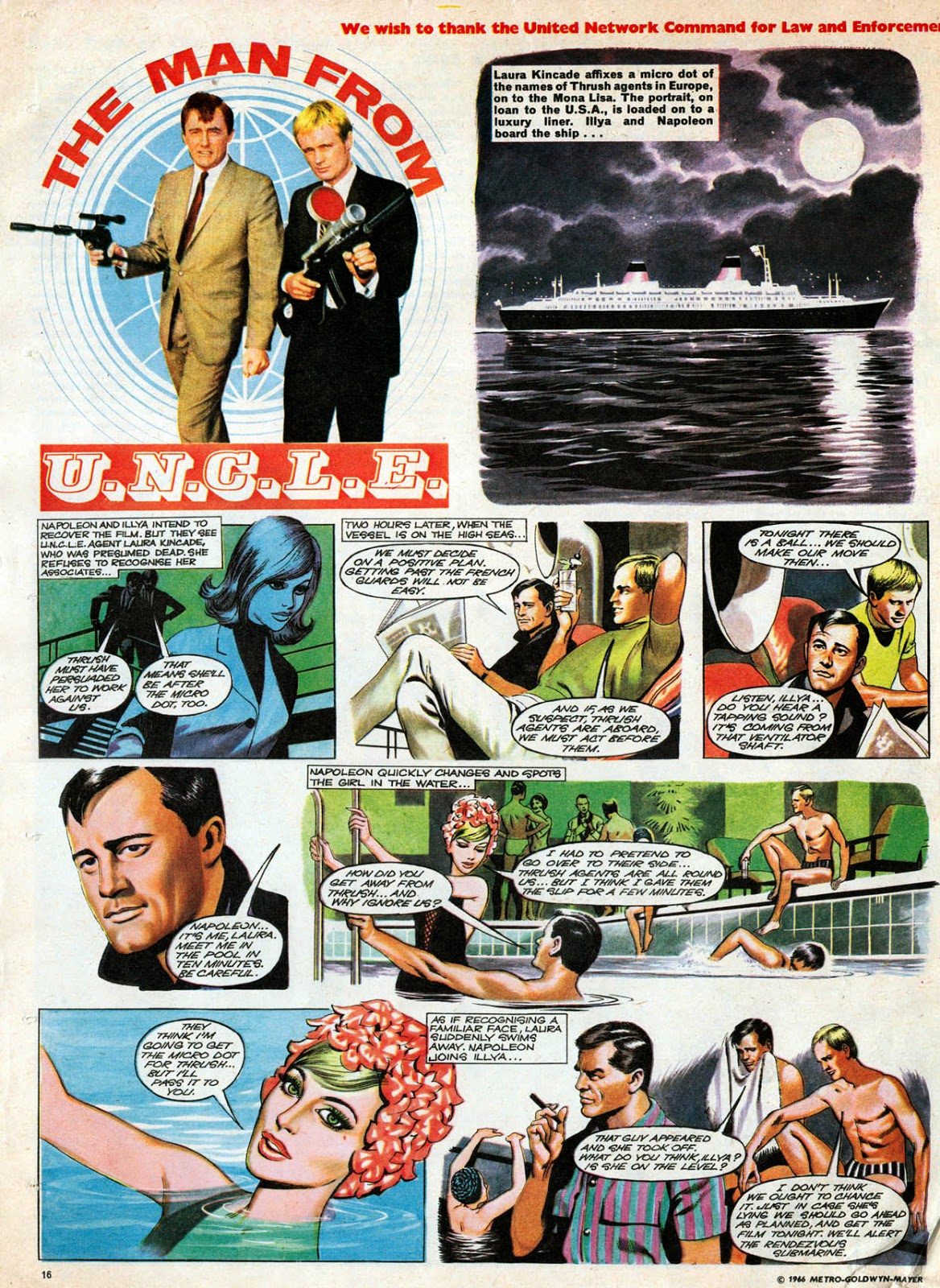 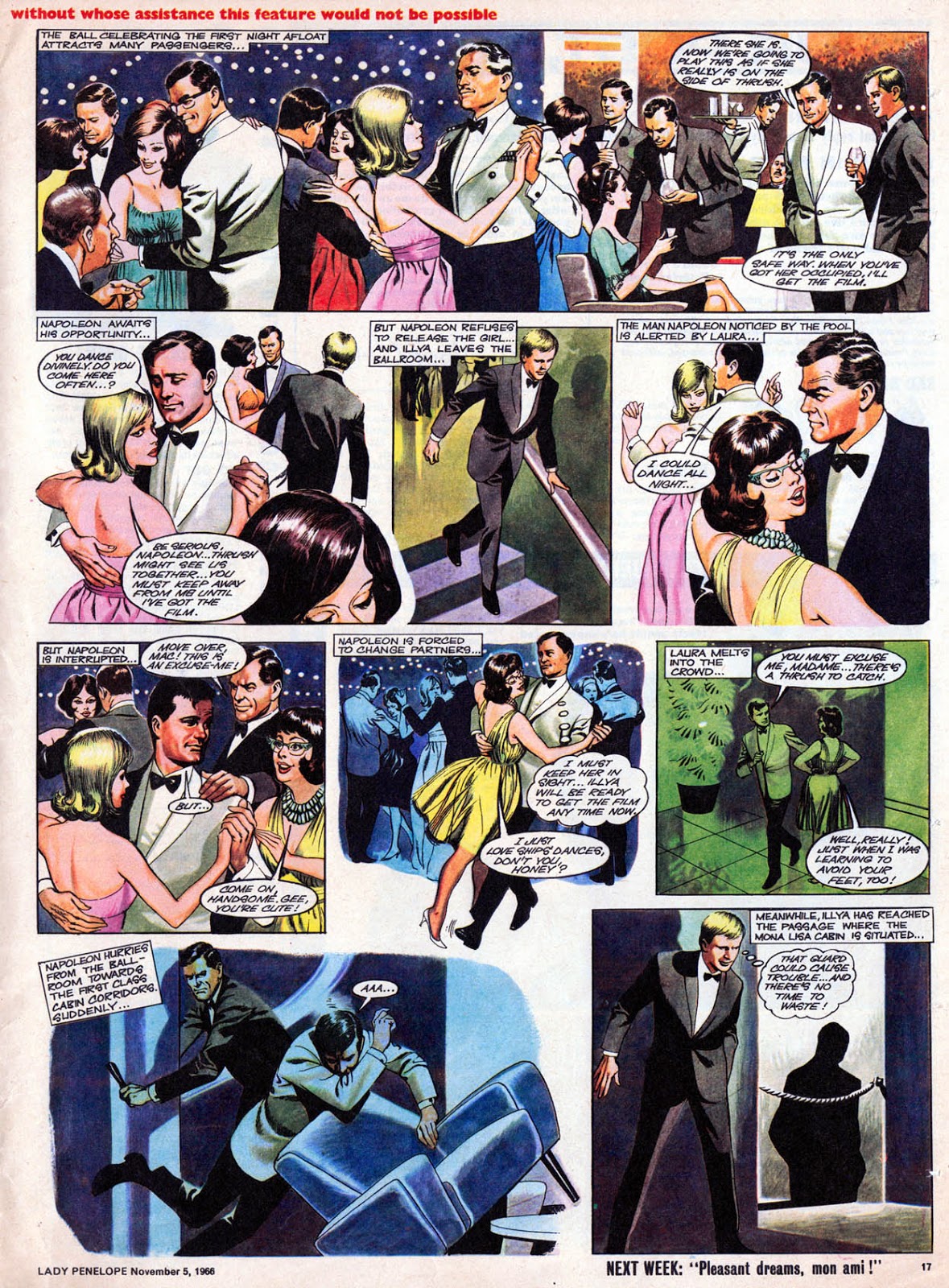 There were also a few humour strips in the comic. The excellent Bill Titcombe drawing Bewitched... 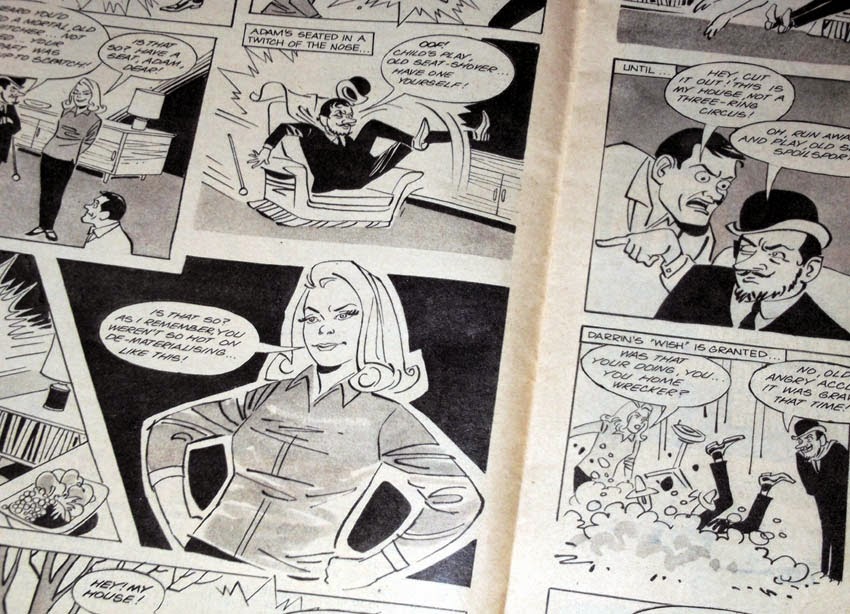 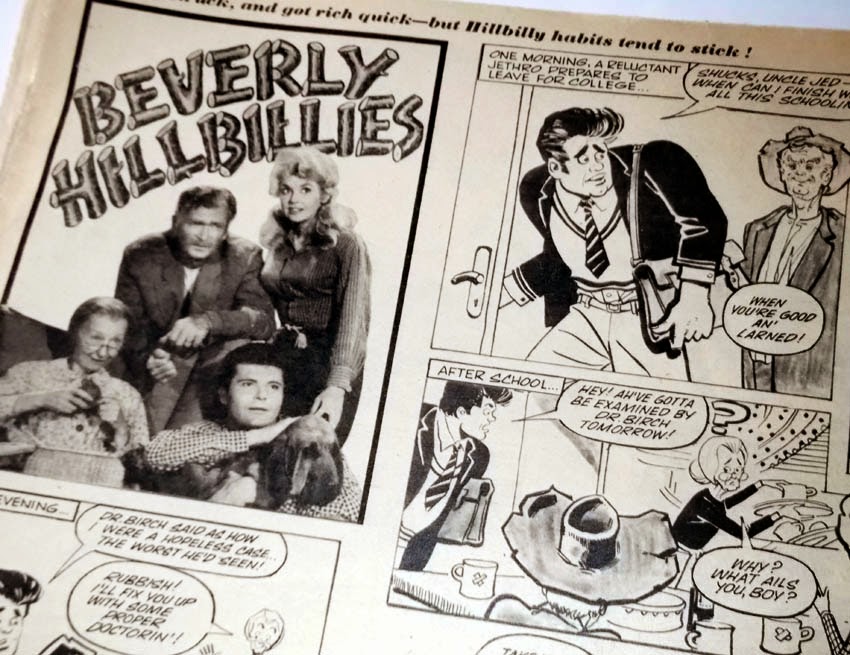 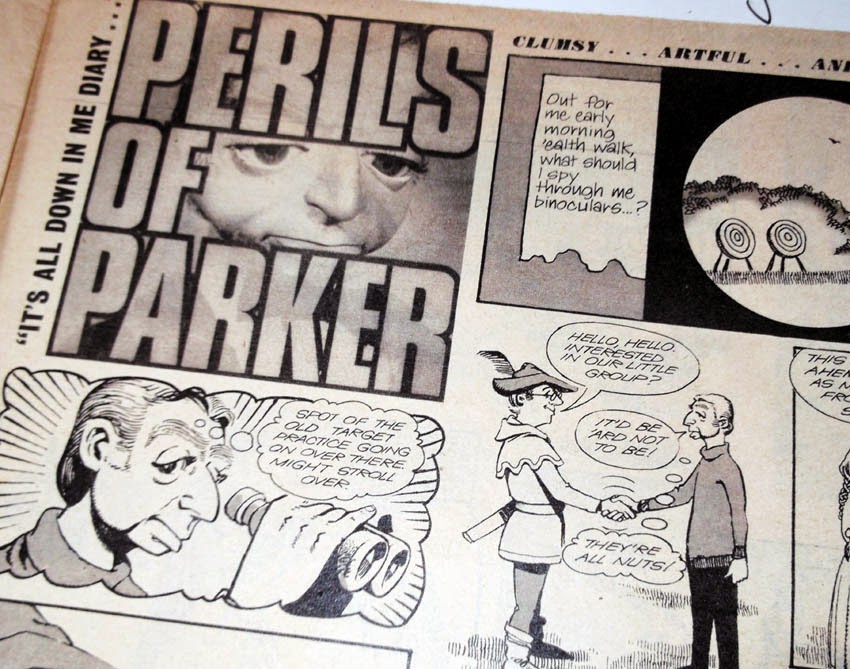 There was also a prose serial, All the King's Men, featuring an ancestor of Penelope. Art by John Canning... 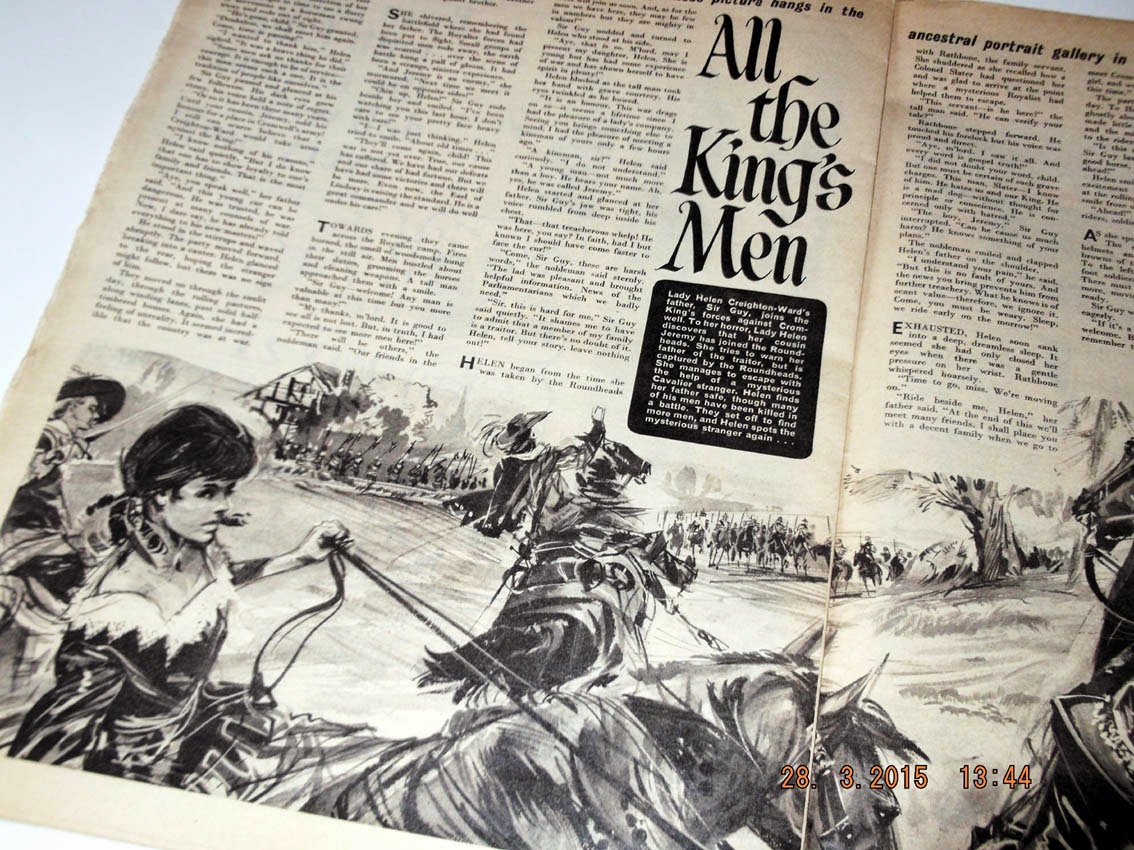 On the back page, Marina from Stingray had her own series. Nicely illustrated by Rab Hamilton... 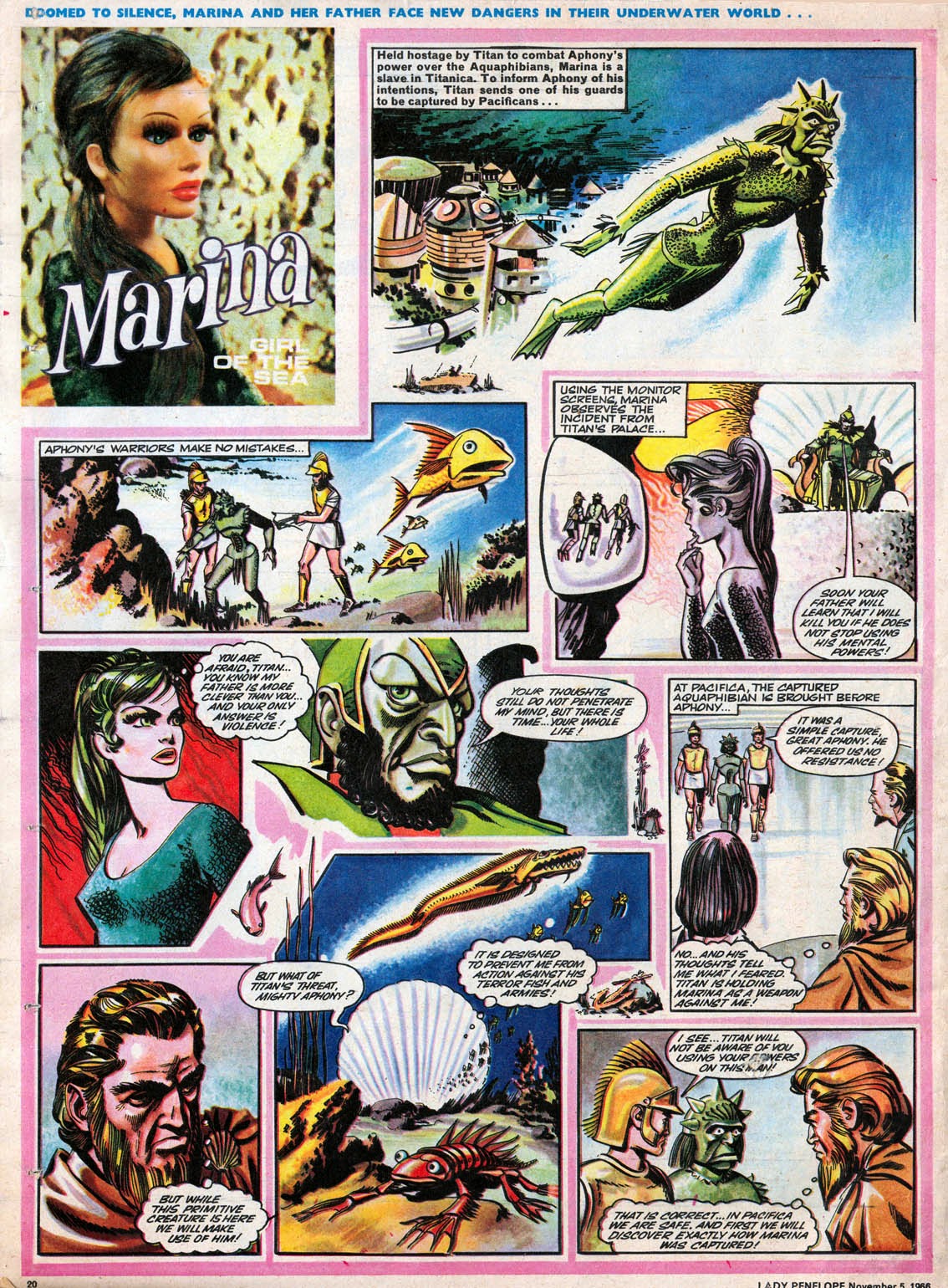 The rest of the 20 page comic was taken up with reader participation features and suchlike. I thought you might like to see a couple of adverts from this issue too, which reflect the times. First is an ad for a Sugar Puffs promotion where girls could buy 'Julie... the fashion doll with everything' for 21/- (One pound and 5p). Turns out that 'everything' included stockings and suspenders for the doll. Guaranteed to turn the head of any Action Man. 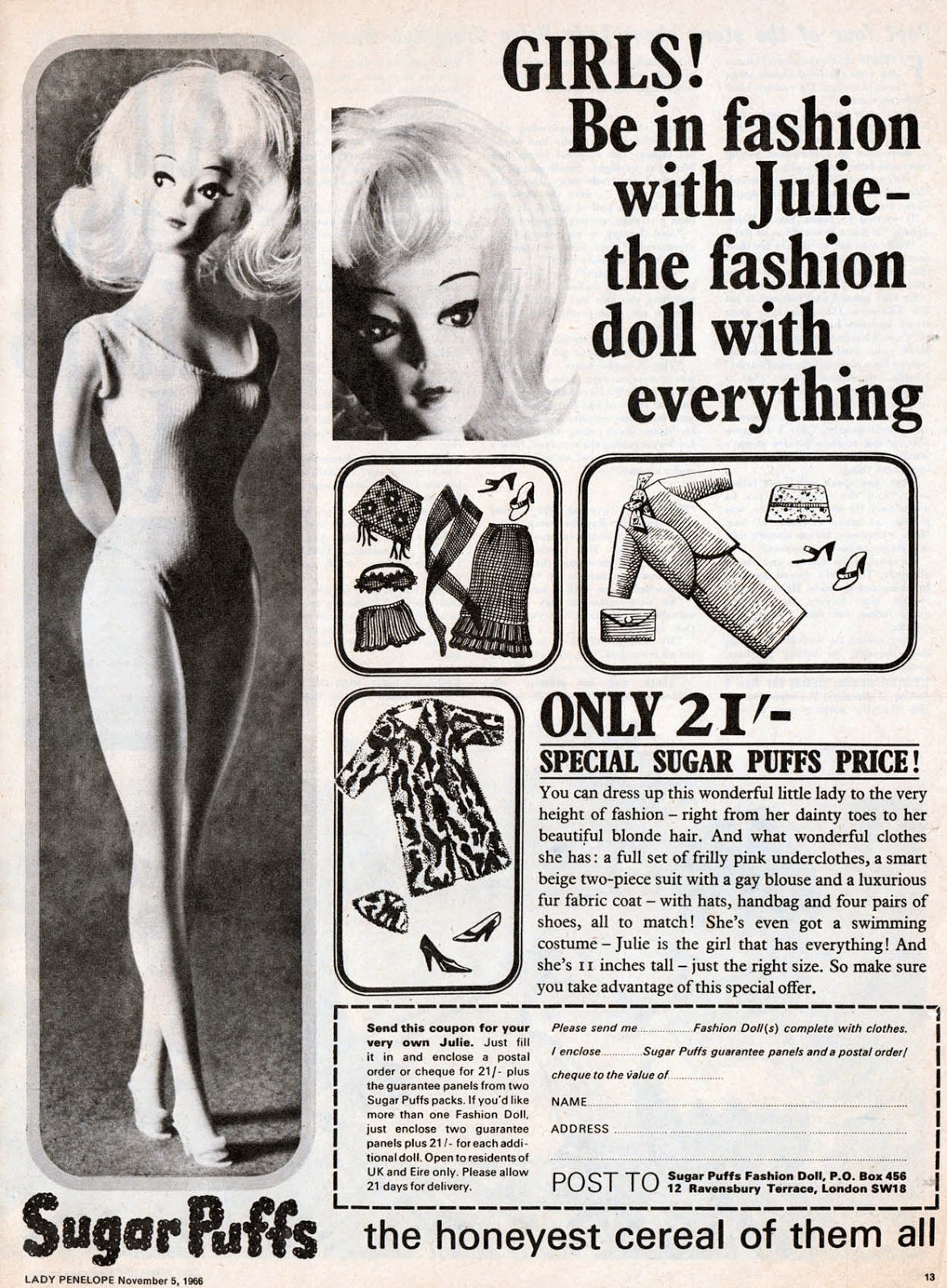 The other full page ad was for a variety of Century 21 toys. No doubt worth quite a bit on the collector's market today. 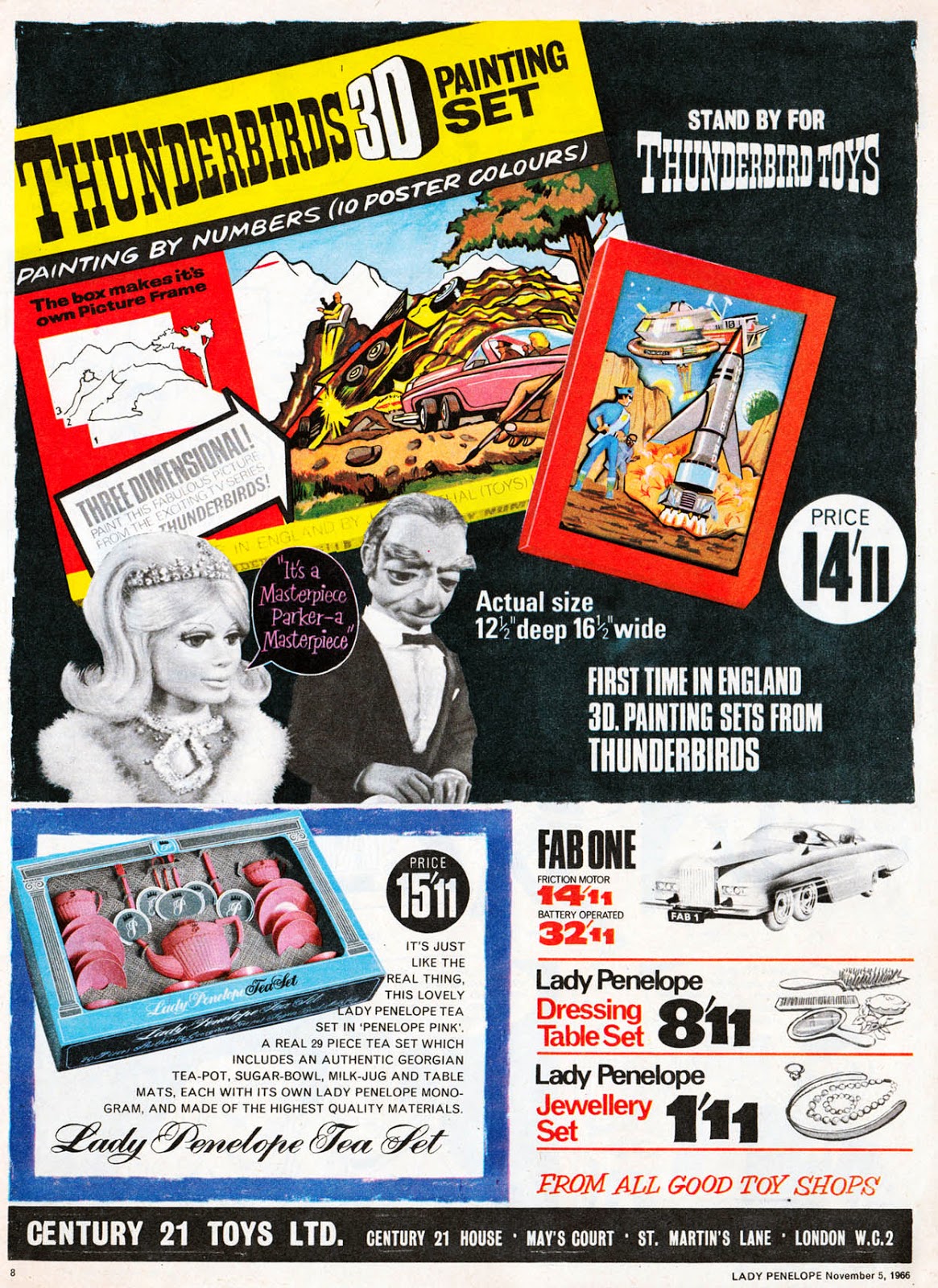 As you can see, Lady Penelope was quite an impressive comic with some great artwork. Too bad that most of us lads back then were too embarrassed to be seen with a girls comic! If you want to read about its history, check out the brilliant Technodelic website here:
http://www.technodelic.pwp.blueyonder.co.uk/Upload03/LadyPenelope02.htm

Thanks for the link, Lew. Kim Stevens covered a lot of the other strips in first year of Lady Penelope, here: http://www.technodelic.pwp.blueyonder.co.uk/Upload04/BigEd04.htm

Hi Lew ..Sad to say that I took this great comic for granted back in 1966..as you do when you're fourteen and Marvel has long-since appeared on your young teenage horizon!The artwork was superb but I suppose we took it for granted because there was so much newsstand choice and I thought it was a bit kidztuff....puppets and that.Probably thought of it like a glossier "Bunty" back then. Obviously my loss ,in retrospect!!

As your average 60's Fanderson-type boy, the ONLY thing that wouldn't have interested me at the time, from what you've shown here is the Julie doll ad. Everything else could have been aimed at the likes of me.
And for those who haven't visited Shaqui's site yet, take it from me, it's a MUST for Anderson in the comics!

As shown on the cover there was a competition to win a dress as well John. I presume that wouldn't appeal either? :)

Paddy, I suppose Lady Penelope was designed as a rival to Diana, which was also a big glossy comic (and also featured some great artwork). I should also mention that it later had a revamp to simply 'Penelope' and became more of a traditional girls comic.

No, but the GA Lady P puppets would have tempted me! I also liked those zany Monkees too. Unlike Paddy, as well as discovering Marvel this year via Smash, I was still buying TV21 as well. Even though I was 14 too, I still had a soft spot for all things Anderson. This practice of buying comics which some might have deemed too young for me set the template for the rest of my life! I don't recall ever seeing any other adults plundering the newsagents' comics and spinner racks during the bronze age!! :-)
Anyway, as Lady P was to TV21, art-wise, so had been Girl to the Eagle, prior to that. And yet another masterpiece we "rugged" boys missed out on!

Correction to my previous comment. I was only 13 in '66! ( Can't reckon up - must be me age! ) But I was still imterested in GA the following year with Captain Scarlet.

One of the many interesting things about the Gerry Anderson shows is that although the viewers were getting older, the shows were becoming more sophisticated. By the time UFO rolled around I was 11 years old so just the right age for something with more depth than the puppet shows.

Another UK comic I wouldn't have looked at as a kid in 66 (being 6 and a boy) that had Tom Kerr art ( still one of my favourite UK artists) I have always liked that cartoon yet semi serious look of drawing (like Joe Staton, Ian Gibson, Bill Holroyd etc) and a style that was quite prevalent in UK comics in the 60s early 70s that now seems lost. Tom seemed to do a fair amount of art in comics I didn't buy (Look In etc) doing caricature style cartooning which I though he was very good at ,maybe not up there with Mort Tucker etc but it always looked good to me - love the little "Mad" touches including the man digging the escape tunnel on page 2 panel 2 . Great stuff again Lew keep it up

Yes, Tom Kerr was excellent at both dramatic and light adventure styles. I suppose Harry North was the closest UK artist in style to America's Mort Drucker.

I'll be showing some more Tom Kerr stuff on this blog soon.

It's great seeing these again - my Dad was the editor - Alan Fennell ,
and my sister and I modelled some of the clothes that were used for prizes - Still have a complete collection of these and TV21 magazines

Thanks for commenting, Diana. It's nice to hear from you. I never met your dad but TV21 was such an enjoyable part of my childhood (and that of thousands of others of course). It's interesting to hear you appeared in the Lady Penelope comic. I knew that some of the City Magazines staff were used for photographs sometimes in annuals etc but didn't know Alan got his children to model as well. That's great!