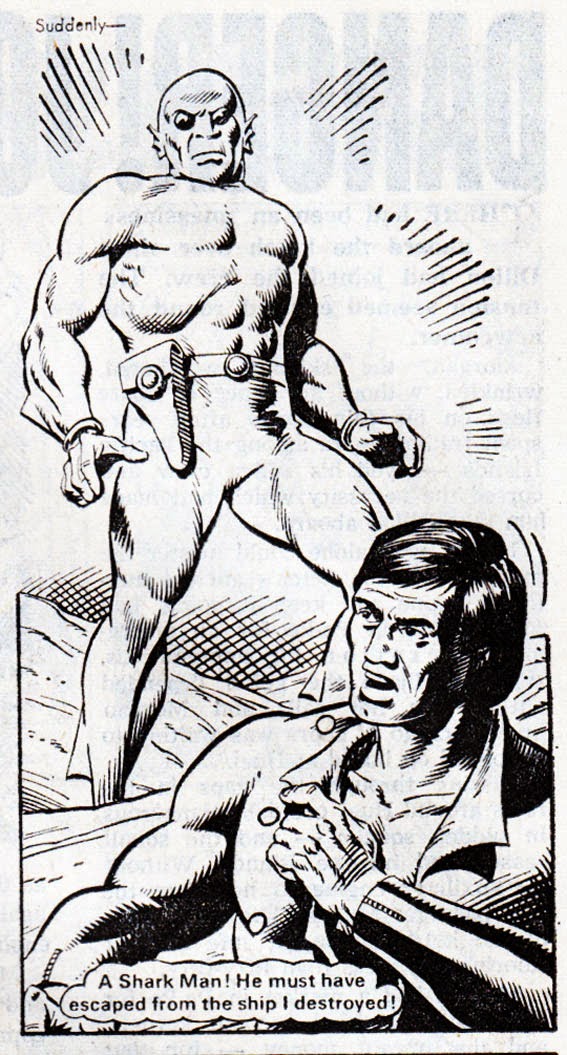 With the issue dated April 24th 1976, D.C. Thomson's adventure weekly anthology The Wizard began a new 12 part serial, Year of the Shark Men. What I hope will be of interest to readers of this blog is that it was illustrated by Dave Gibbons in the early part of his career.

The script, presumably by a staff writer at DC Thomson, is pretty standard boy's adventure material; sinister undersea race threatens mankind with extinction so humans have to fight them to save the world. The main attraction of the strip is Dave's artwork. Even back then we can see that Dave's artistic abilities were flawless and he had a dynamic and clear sequential technique with a strong inking style. I'd say it was certainly the best looking strip in the comic that year.

Here are the first three chapters. Click the pages to see them larger... 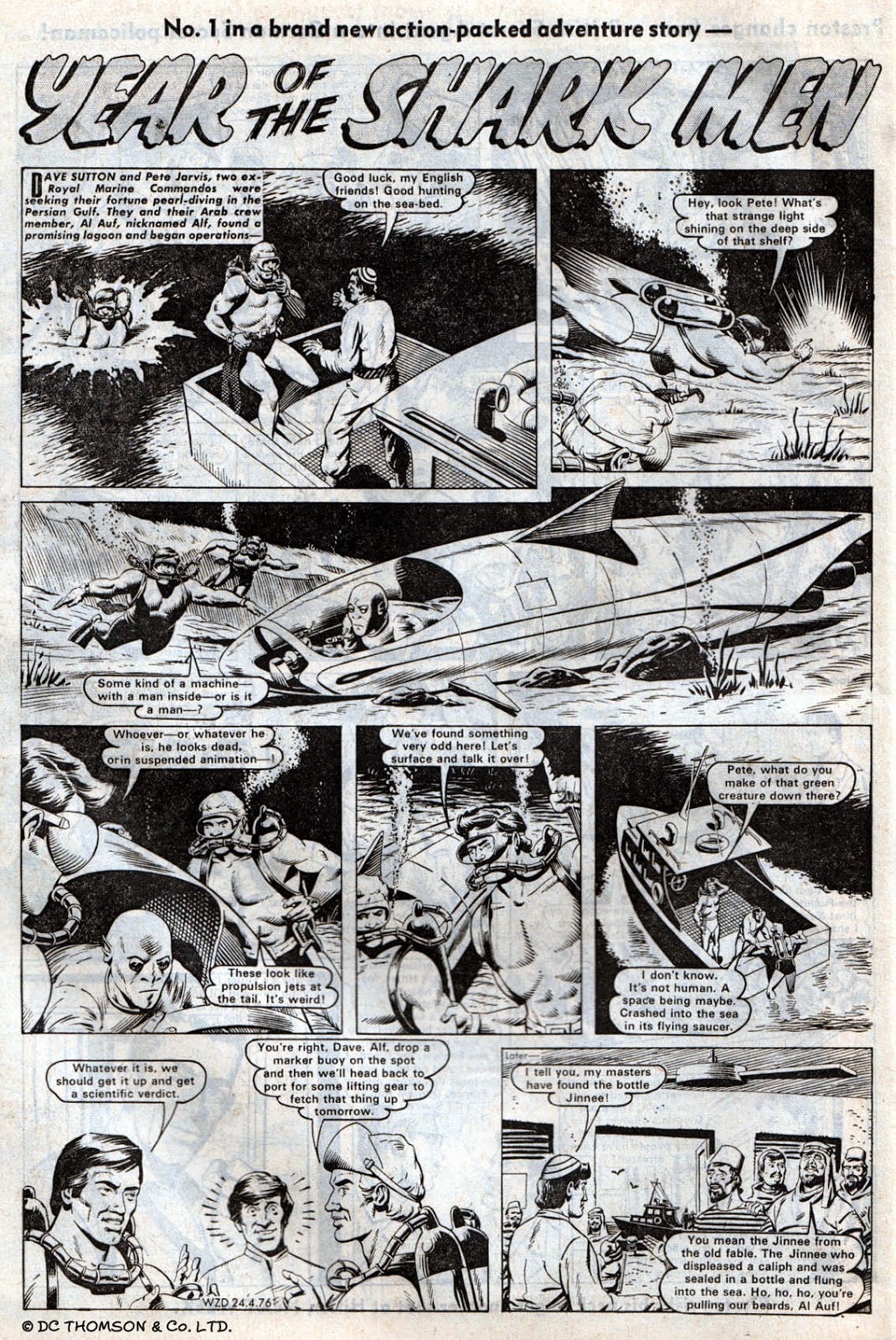 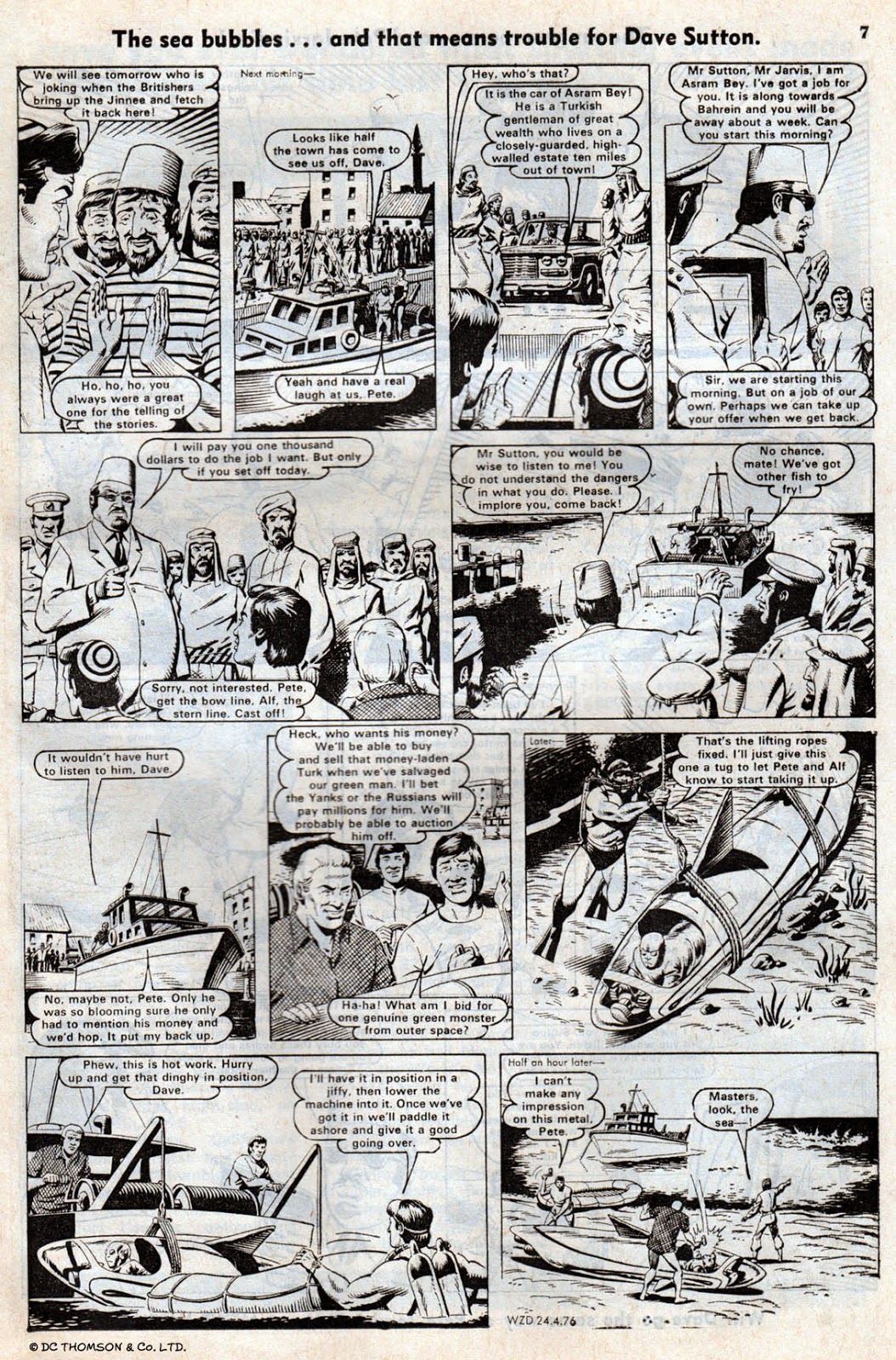 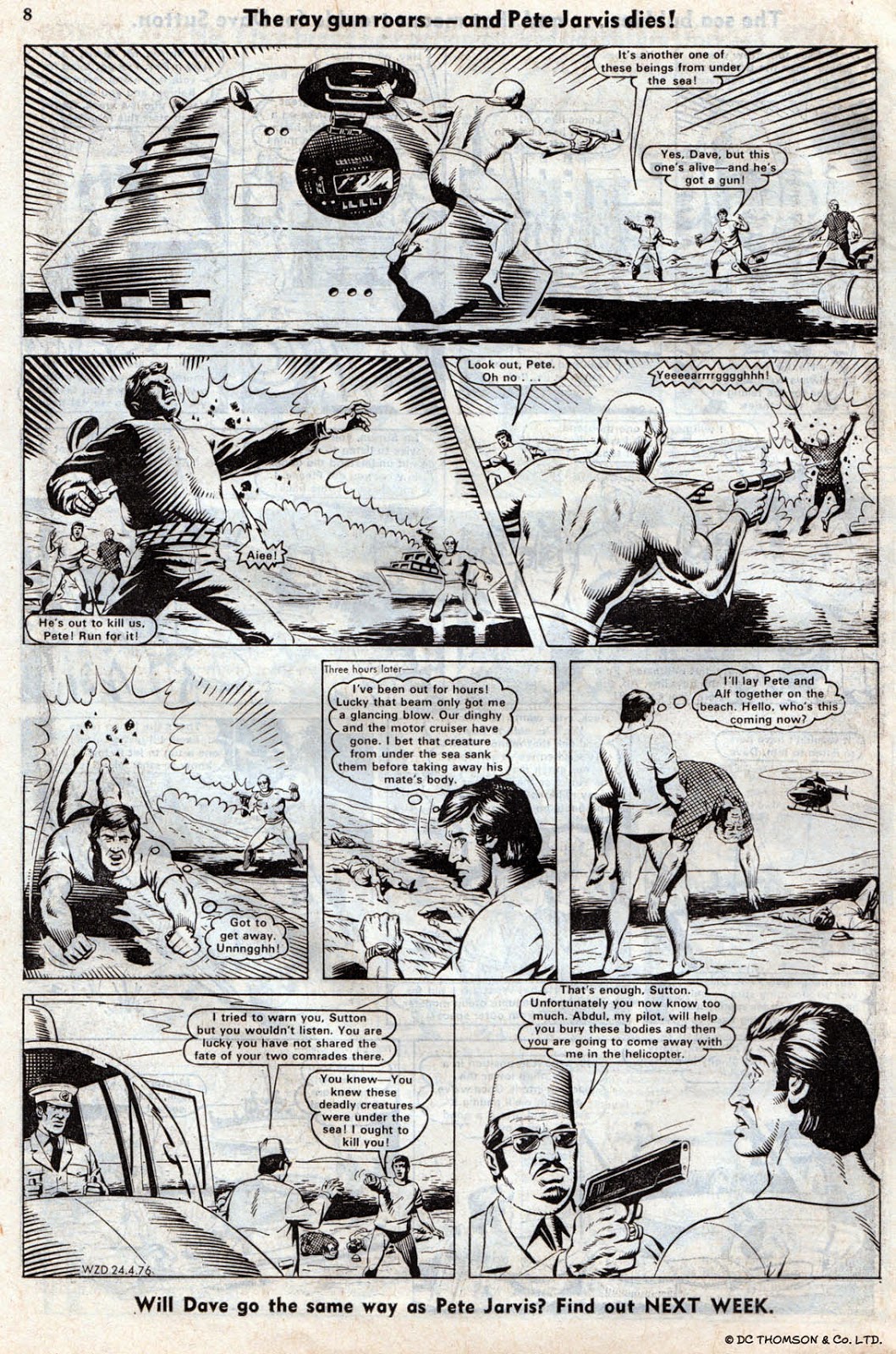 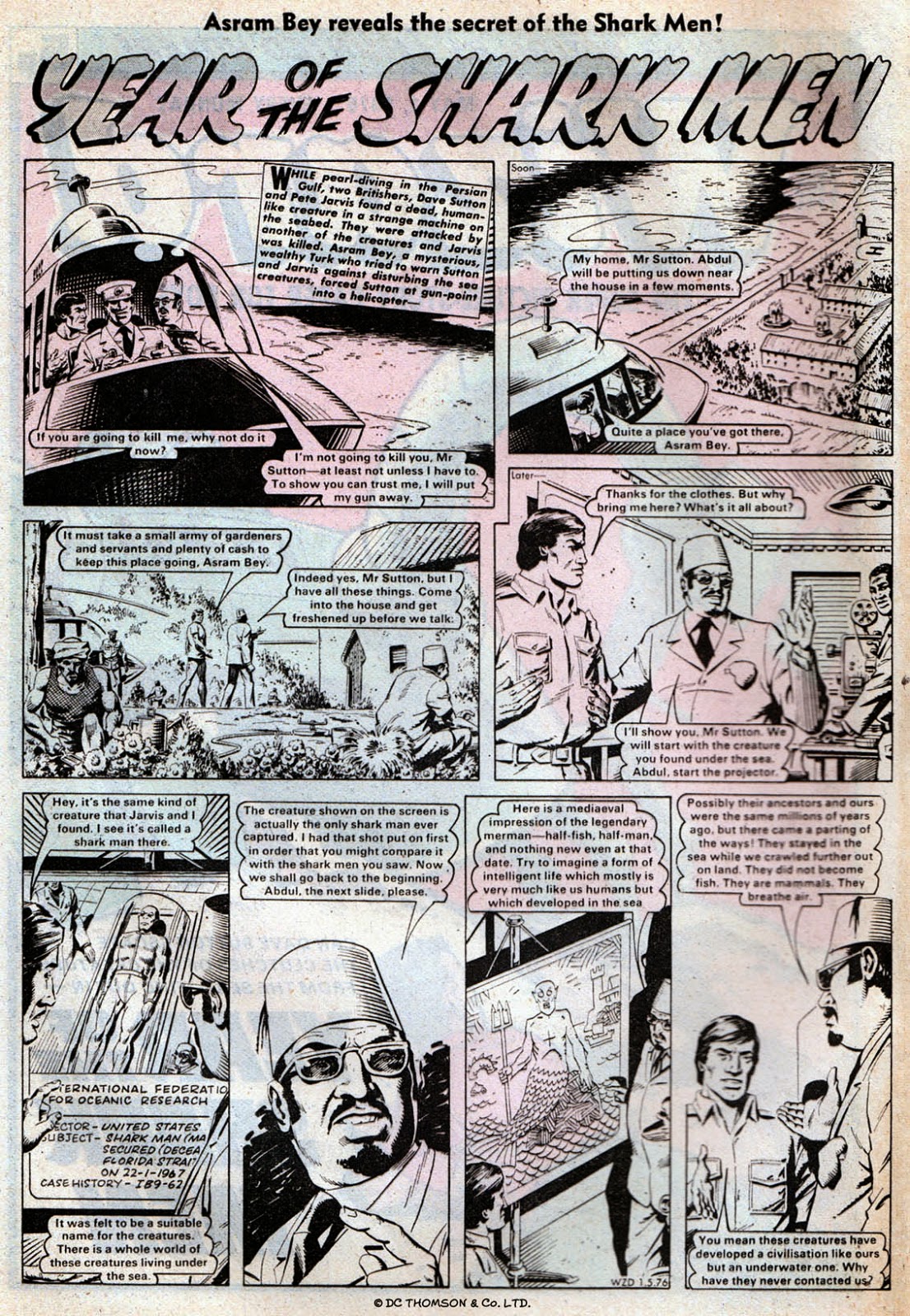 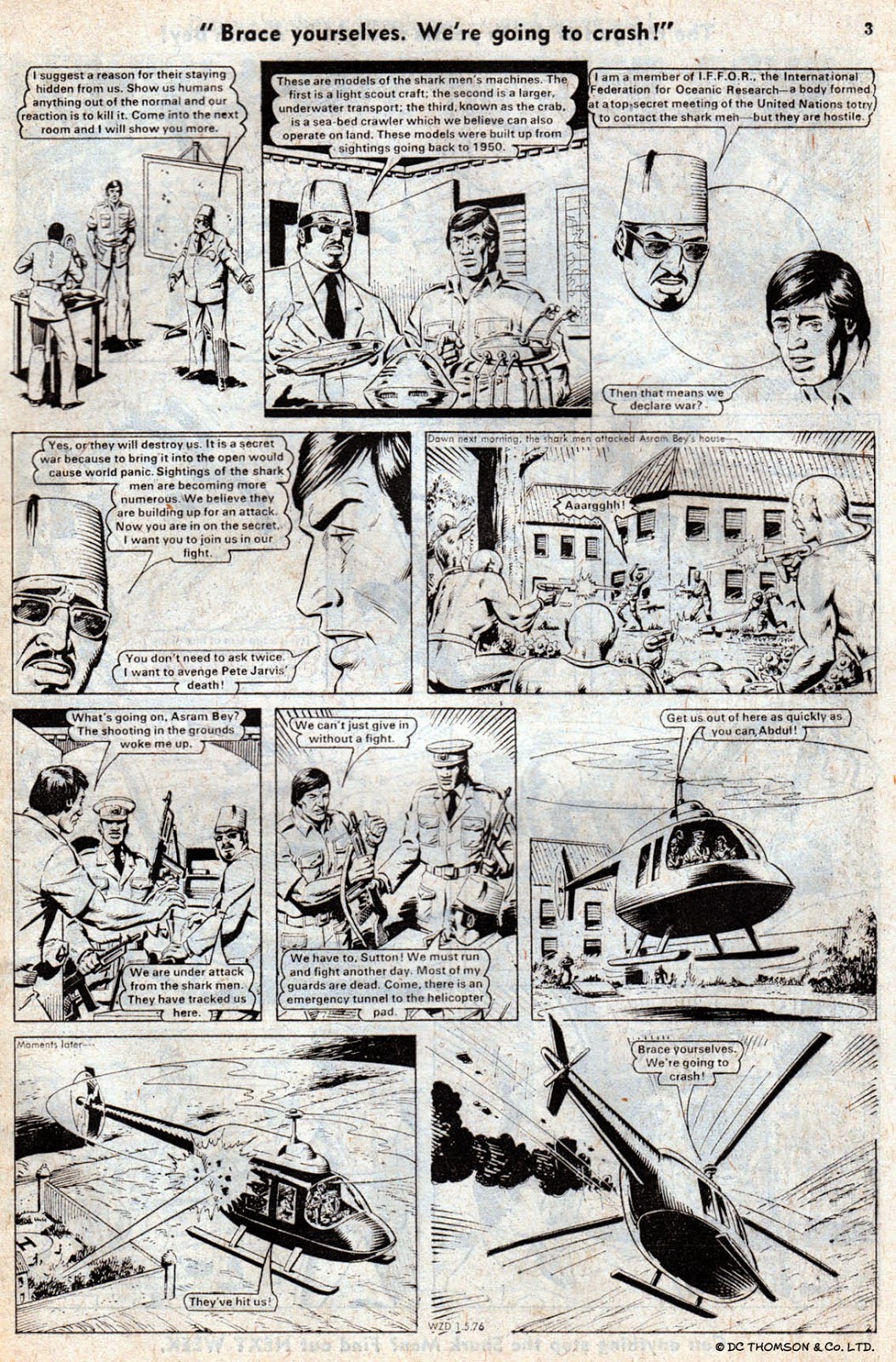 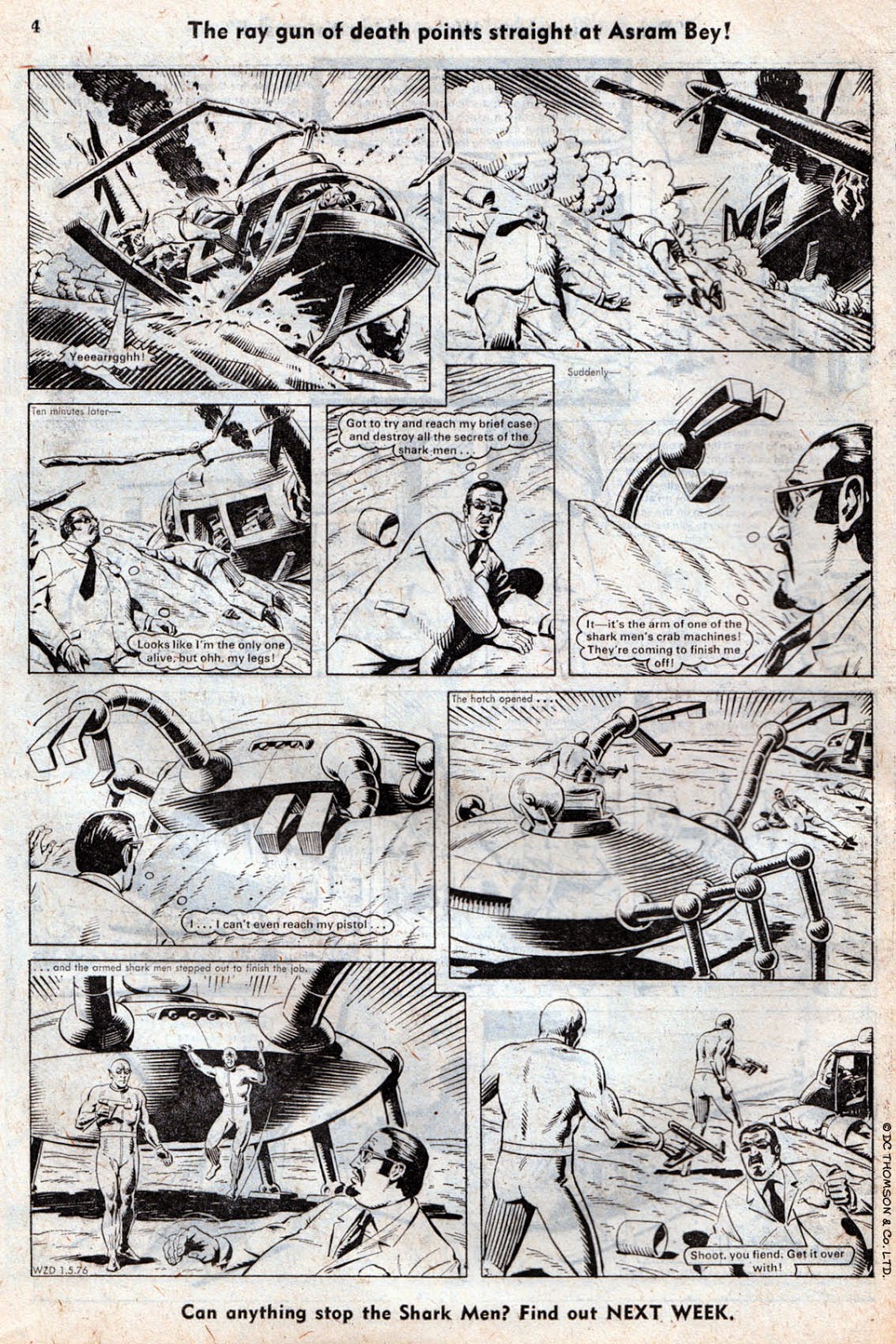 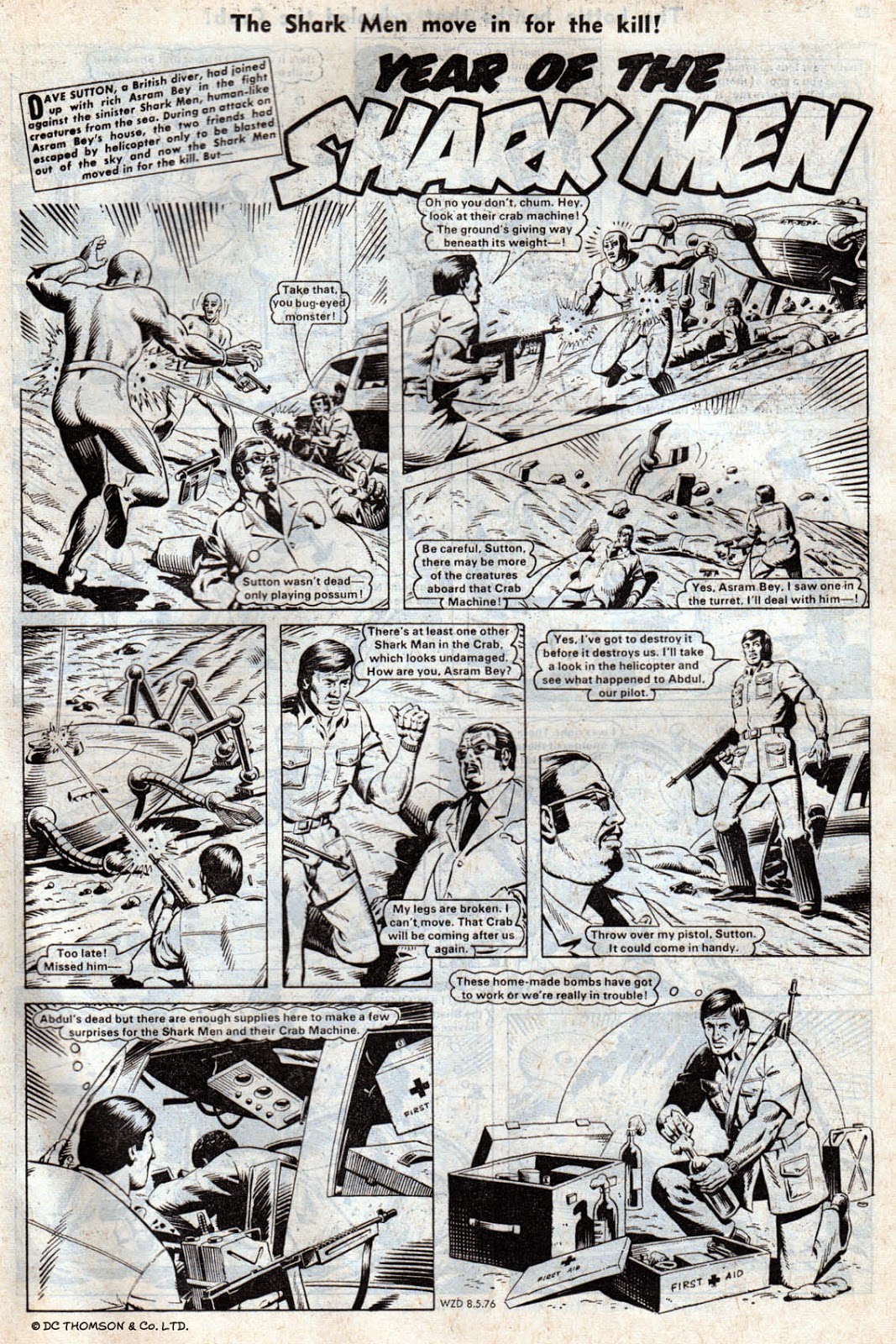 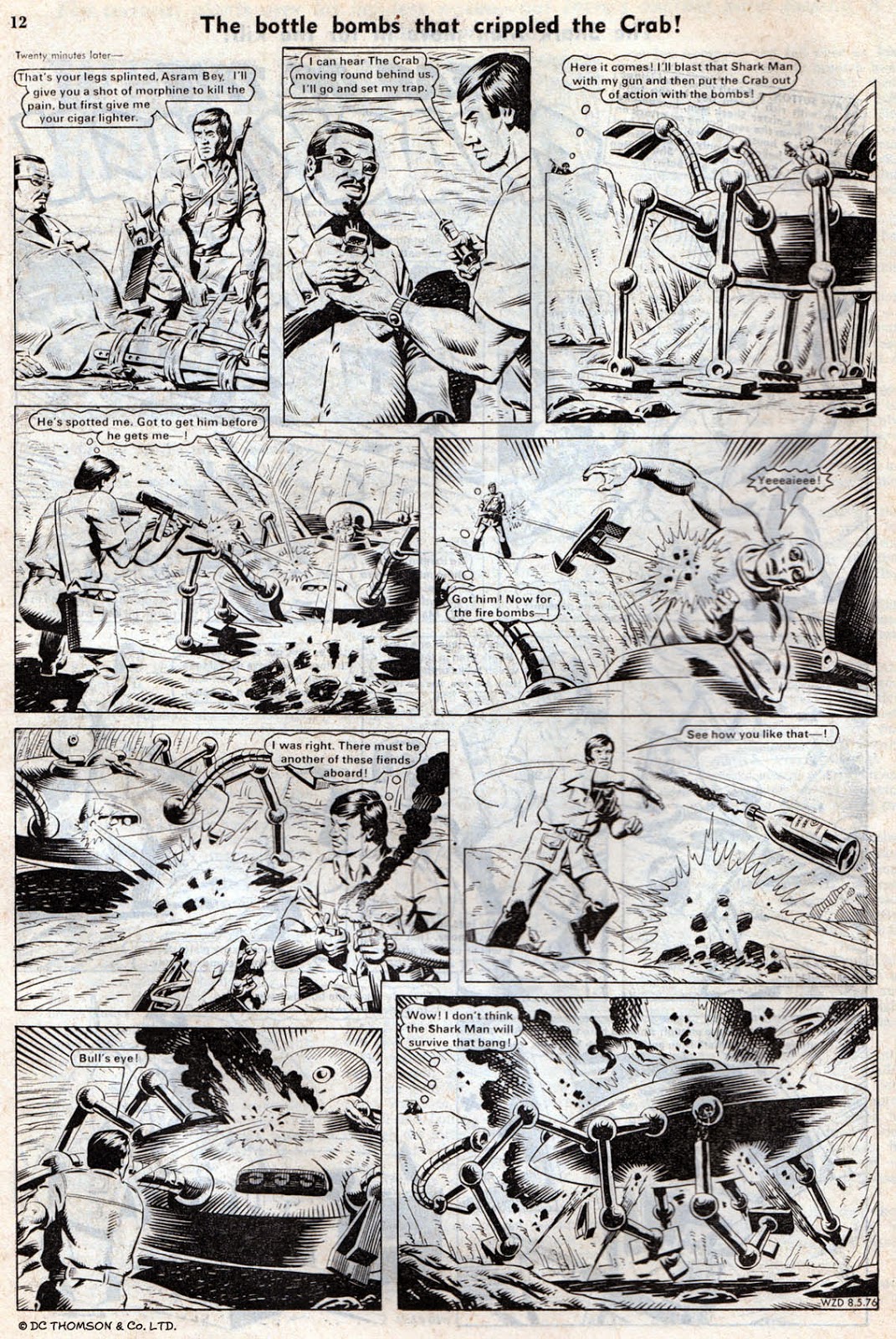 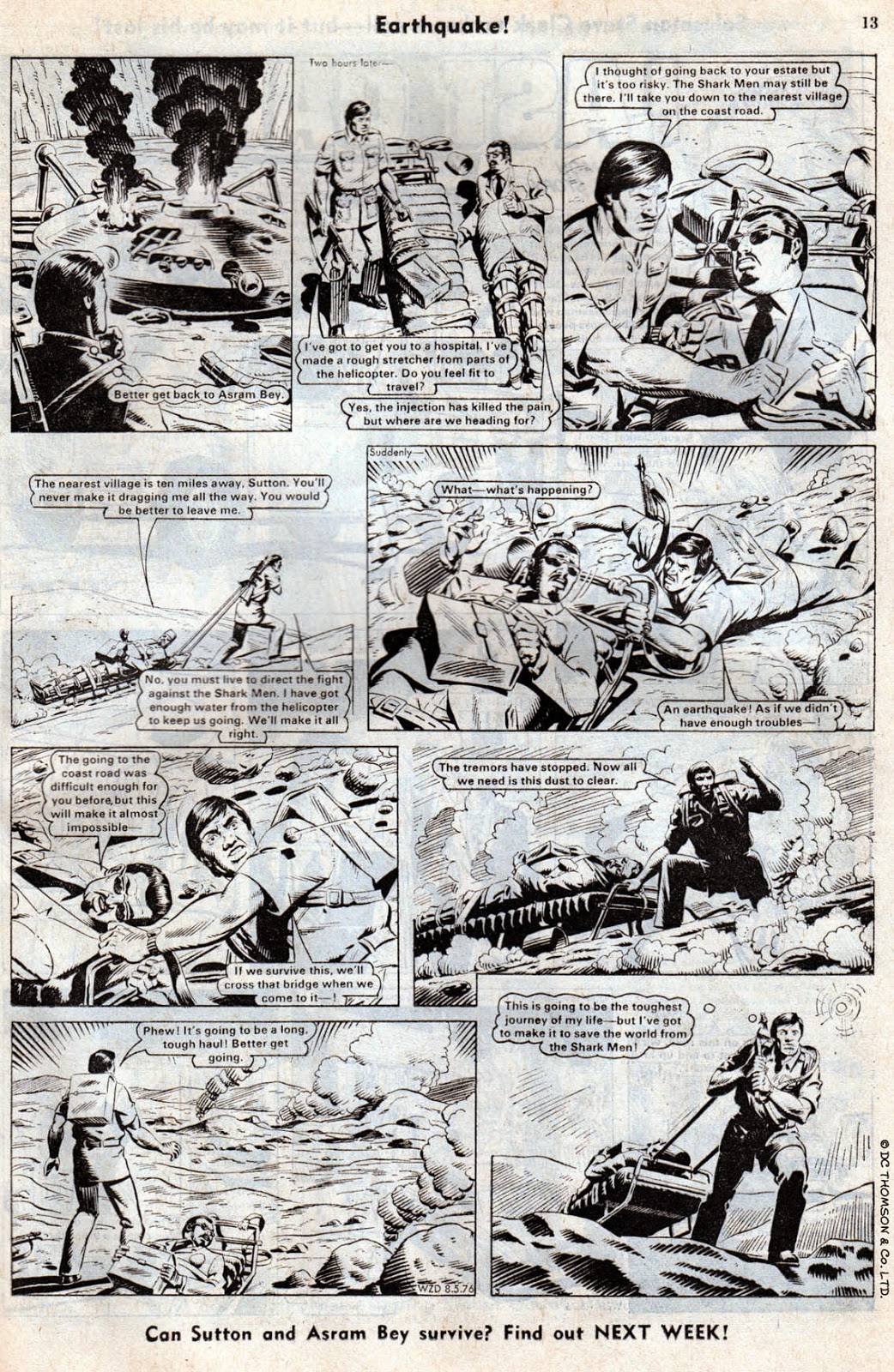 As I said above, the series ran for 12 weeks in total. Curiously, with the final two chapters, the inking style seems a little bit different. I wasn't even sure if those parts were by Dave but there's enough about it to convince me it was. Here's the final episode from the issue dated July 10th 1976... 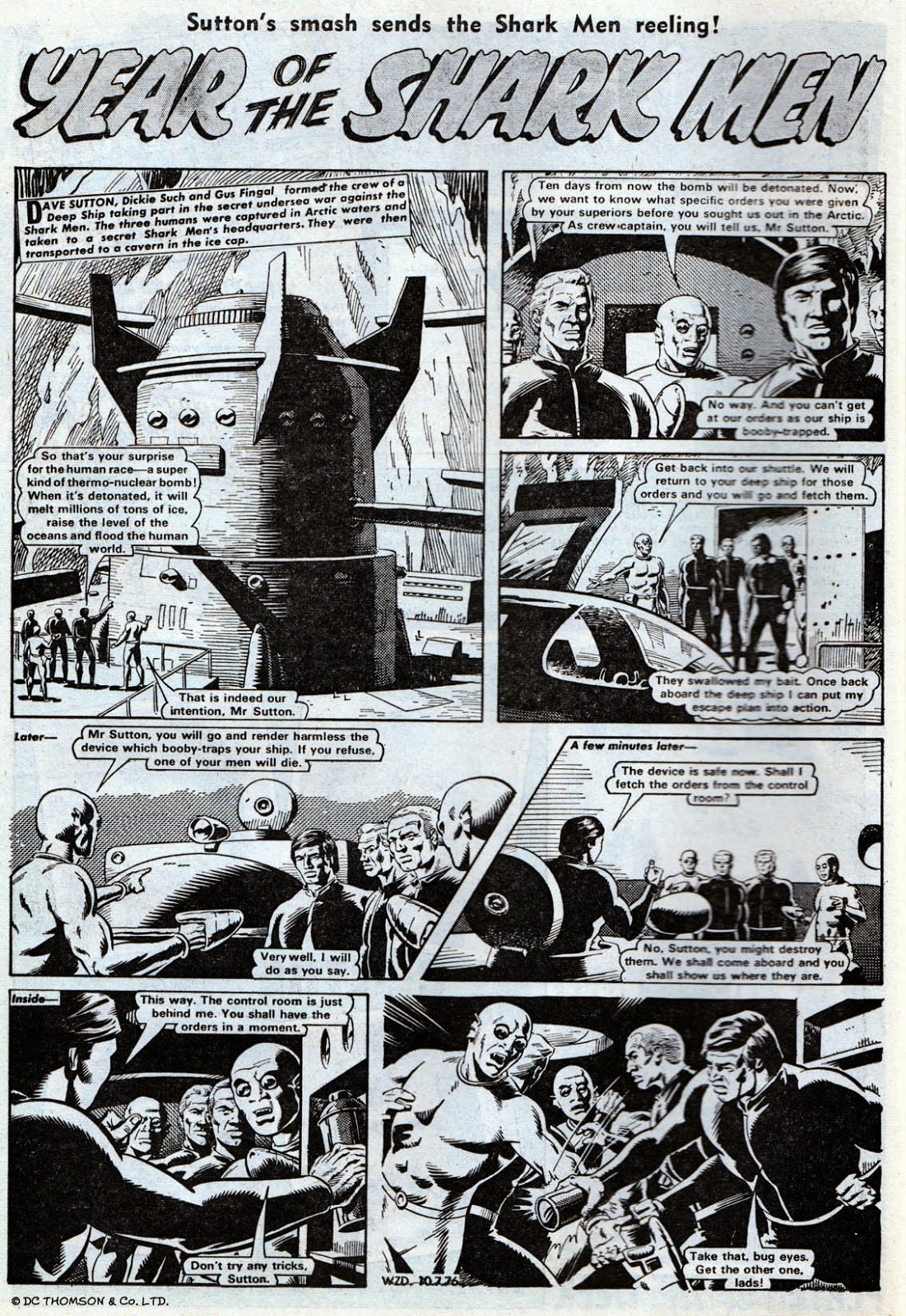 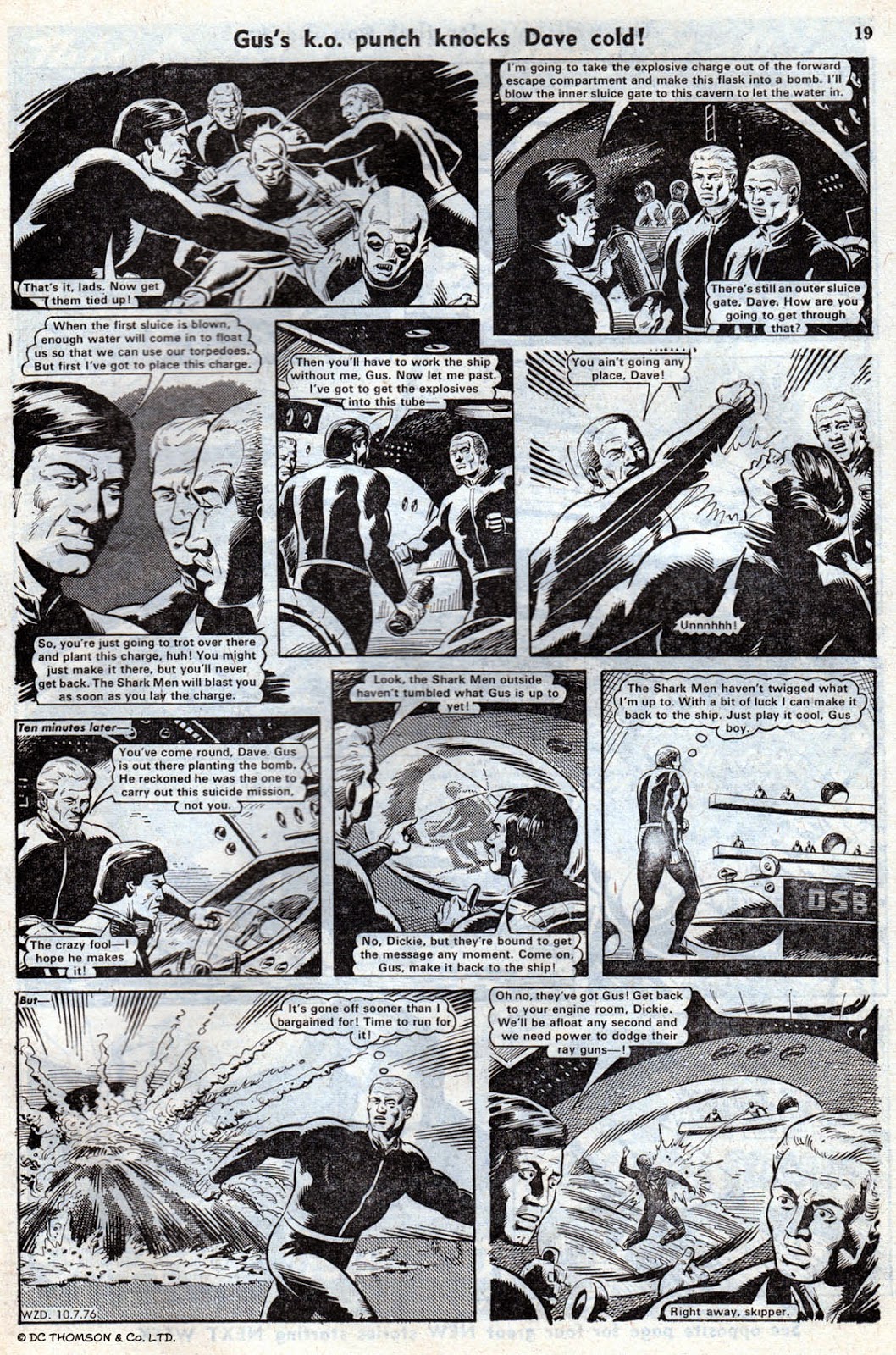 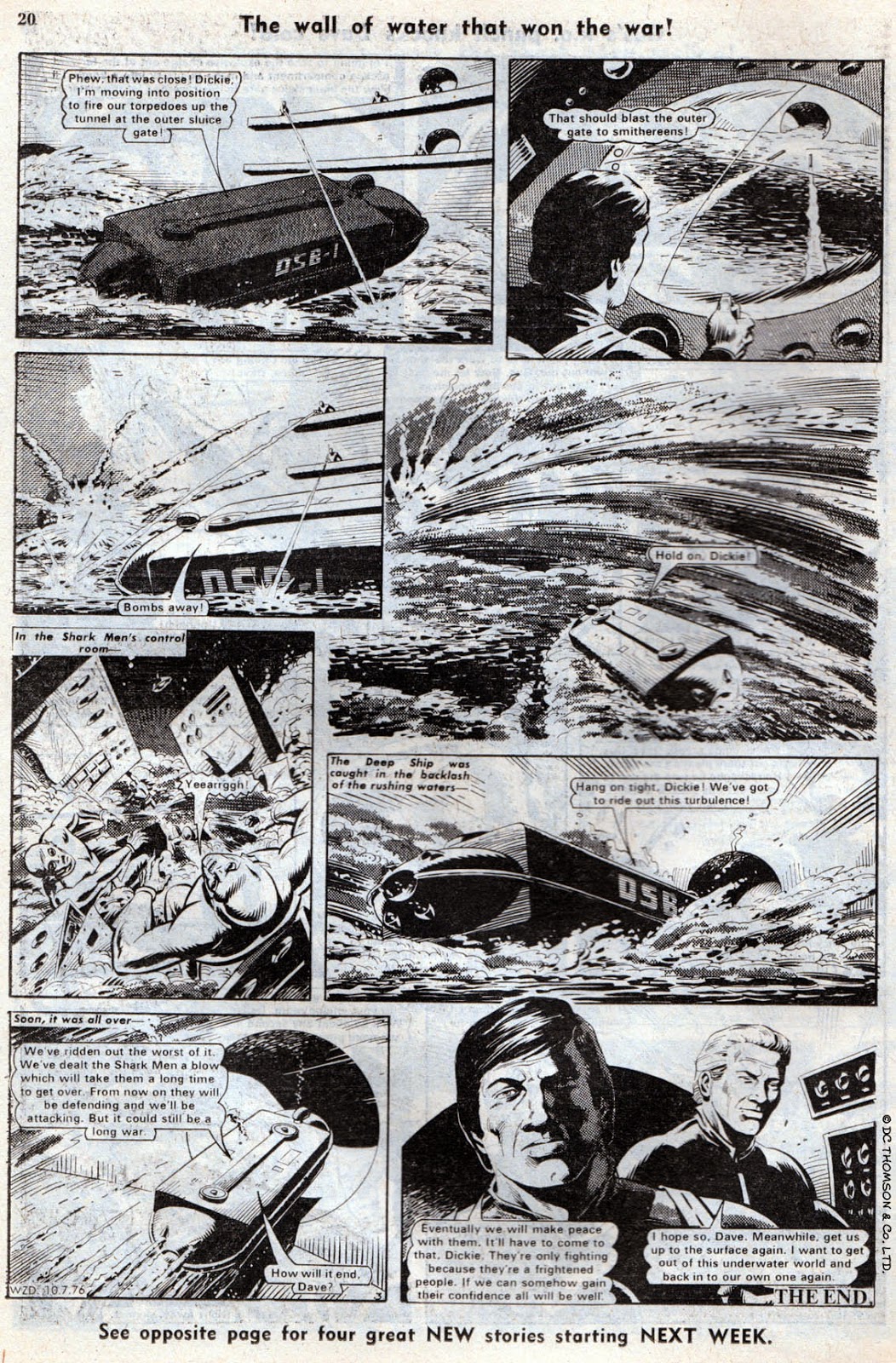 A few months later of course Dave Gibbons would be illustrating Harlem Heroes for the newly launched 2000AD over at IPC, and his career would really start taking off. Today he's deservedly one of the most successful and well known creators in the history of comics, famous as the co-creator of Watchmen, and has become the first comics laureate. Didn't he do well!

Year of the Shark Men was cover featured on four issues of The Wizard during the strip's run but none of them were drawn by Dave. I'm showing the covers here anyway as I'm sure they'll be of interest. The May 22nd cover looks like Ian Kennedy's work to me, and I'm guessing the other three are by Jeff Bevan. (I may be mistaken. Ah if only comics had featured credits back then!) 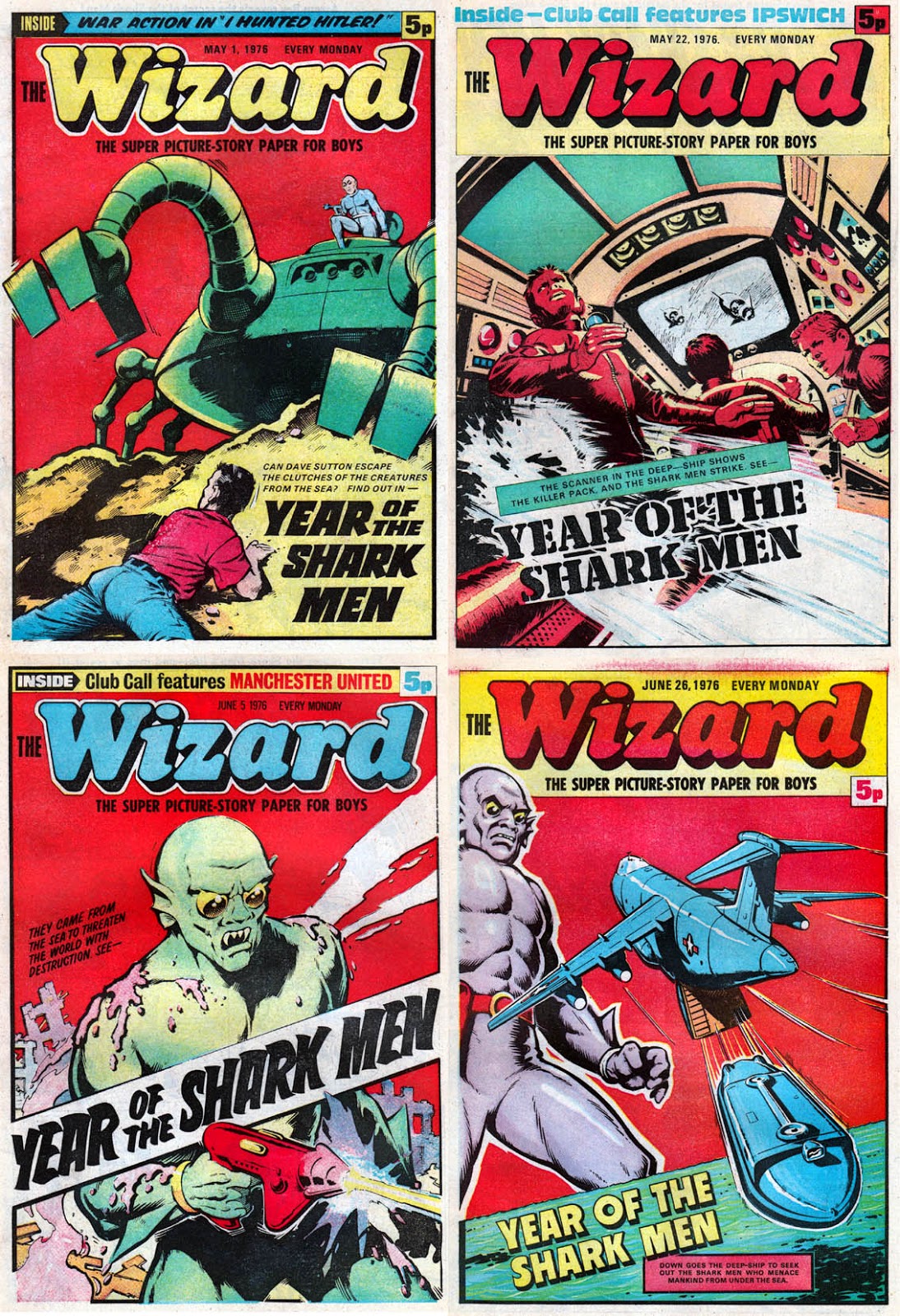 Email ThisBlogThis!Share to TwitterShare to FacebookShare to Pinterest
Labels: Dave Gibbons, The Wizard, Year of the Shark Men

I believe Dave shared a studio with Brian Bolland for a while Lew and they often helped each other out - so that might explain the change in the final episodes.

Thanks. I knew Dave shared a studio with Mick McMahon in the early 1980s but didn't know he'd shared with Brian earlier.

Hi Lew,
Correct about the covers 1 Kennedy and 3 Bevan. I've listed
all the work Dave Gibbons did for Wizard on comics uk should anyone be interested.

Thanks Ray. I'll check that out.

Thanks, Lew. Have been a great fan of Dave Gibbons since his early days with 2000AD. I loved his Dan Dare. I am really tempted to buy those issues so that I can the story.

Same here, Sid. It was on 2000AD when I first saw Dave's strip work, although I'd seen a fanzine illustration he'd done a few years earlier. A fantastic artist I'm proud to know.

SID, I recently read that 2000AD is going to release a collection of all Dan Dare strips that were published in the magazine, so you don 't need to hunt down the old (and very expensive) 2000AD issues...

I presumed Sid was talking about hunting down The Wizard issues (which are very cheap) but I could be mistaken.

Now this is a discovery as I had always thought Dave Gibbons' career had started in 2000AD with Rogue Trooper. His style is already very recognizable. Thank you for sharing.

I have a few of these issues and I find them both fascinating and inspiring. I was not buying UK comics when these were on sale - I picked up my issues via e-bay !

Same here, Tony. In 1976 the only British comics I was buying were Action and the Marvel UK weeklies. I'd stopped buying the others a year earlier when I left school.

"Year of the Shark Men" was reprinted in Greece, by Stelios Anemodouras in "Blek" mag, some years later. Excellent series, magnificent artwork!!!!!!!!!!!!!!!