Something that should be celebrated by all UK comic fans is that we now live in a time when comic creators are often interviewed in the mainstream media. This week comic writer Mark Millar was interviewed on the BBC's HARDtalk programme about his comics and movies and you can watch it on the BBC iPlayer here:


Most of you will know Mark as the co-creator of comics such as The Ultimates, Kick-Ass, and Kingsman: The Secret Service amongst others. He was also the editor of the sadly short-lived comics anthology CLiNT where several of his strips appeared. 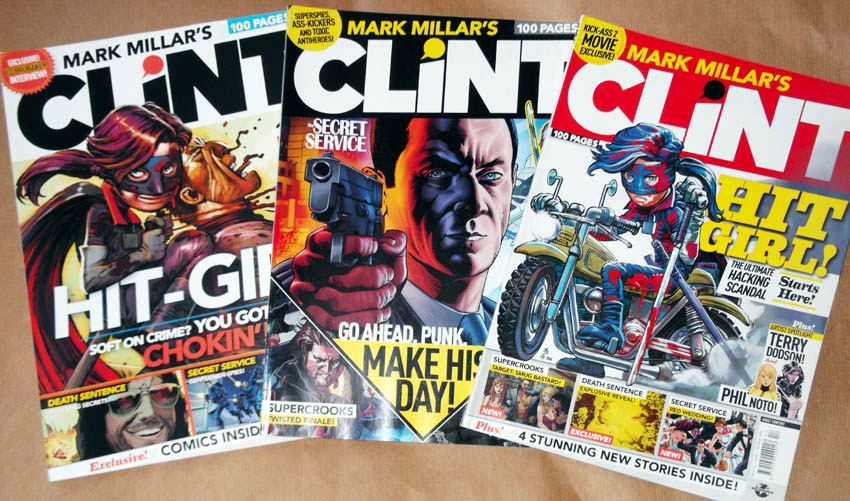 The interviewer is Zeinab Badawi and as you might expect, the subject of violence in comics is addressed. Mark tackles the questions well and I share his opinion that comics do not make people violent. I was also as puzzled as Mark as to why anyone would claim his Hit-Girl character was 'sexualized' in her appearance. (I think anyone who sees that in the character has other issues going on. Hit-Girl is more like a foul-mouthed, ultra-violent Minnie the Minx.) Anyway, have a watch of the programme for yourselves. It's a good interview.
http://www.bbc.co.uk/iplayer/episode/b05qgk4c/hardtalk-mark-millar-comic-book-author
Posted by Lew Stringer at 10:37

I completely agree that comics don't make people violent but I'm afraid I find the violence unpleasant nevertheless. I did buy a couple of issues of 'Clint' but the violence was way over the top in my opinion. I don't believe in censorship and I wouldn't tell other people what they can or can't read but the OTT violence is just not for me.

I know what you mean Colin. I don't like scenes of gore, and avoid any horror movies of that ilk. (Give me the 1930s horror movies any day.)

Violence in comics I can cope with to a certain extent, depending on its execution. (No pun intended.) But certain scenes of gore I find upsetting now, after the fall that led to my mum's death. (Finding her with a head injury lying in a pool of blood.) I'm not saying that for sympathy by the way, just to explain why I personally find scenes like that disturbing now. But if readers don't mind such scenes in comics then good for them.

I didn't know about this edition of HARDtalk, but have now watched it ... like so many "journalists" these days, Zeinab Badawi appears to come to the interview with her mind made up then tries to get Millar to validate her worldview. I'm very sceptical of the "studies" that demonstrate comic violence leads to real world violence. Indeed, Bawadi herself uses the term "aggression" rather than "violence" and we should be very careful not to confuse the two. It's possible that these studies indicate that violence in the media leads to heightened aggression in real life, but rational people are able to prevent their aggression erupting into actual violence.

We had the same tabloid arguments raised during the 1980s around the "video nasty" phenomenon ... the arguments were spurious then and, frankly, have no place in a "serious" journalism segment like HARDtalk.

I think Colin has the right idea ... if you don't like it, don't read/watch it ... but don't seek to prevent others from reading/watching just because it's not your cup of tea. That path leads to book-burning.

I completely agree, Alan. Certain parts of the news media have always been swift to suggest fiction leads to fact in the case of penny dreadfuls, comics, and video 'nasties'. It always seems like lazy sensationalism to me, to avoid the deeper issues. I don't know if you saw it but several years ago I did a blog post on the UK anti-horror frenzy of the 1950s, and in my research I found some really alarmist news stories from the Daily Mirror....
http://lewstringer.blogspot.co.uk/2010/03/1954-year-britain-got-horrors-over.html