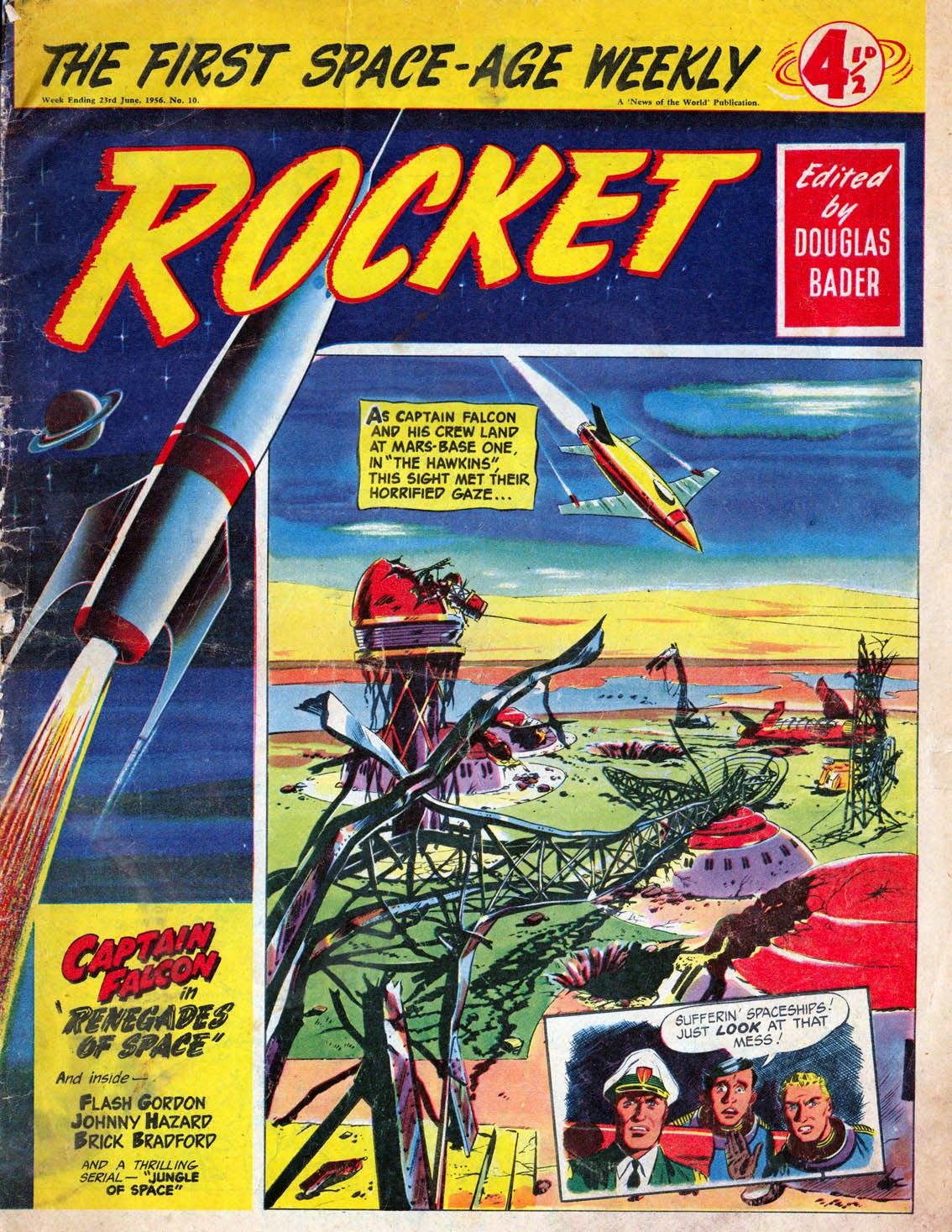 In 1956 News of the World publications launched Rocket, a new 16 page tabloid weekly as a companion to their TV Comic and Express Weekly titles. Dubbed 'The First Space-Age Weekly' its contents were mostly science-fiction and fact. It proudly proclaimed it was 'Edited by Douglas Bader', and perhaps the famous airman had some input but he wasn't the actual day to day editor. From its format it was obviously intended to be a rival to Hulton's Eagle, but Rocket spluttered and crashed after just 32 weeks.

What went wrong? Rocket certainly looked eye-catching enough with its dynamic logo, as can be seen from the cover to No.10 above. The contents were of a good quality, but perhaps Britain just wasn't ready for a comic solely based around science-fiction in 1956.

More likely the readers simply saw it for what it was; an inferior knock-off of Eagle. Why buy second-best? The cover strip was Captain Falcon, a Dan Dare type which although expertly drawn by Basil Blackaller wasn't quite in the same league as the pages produced by Frank Hampson's studio. 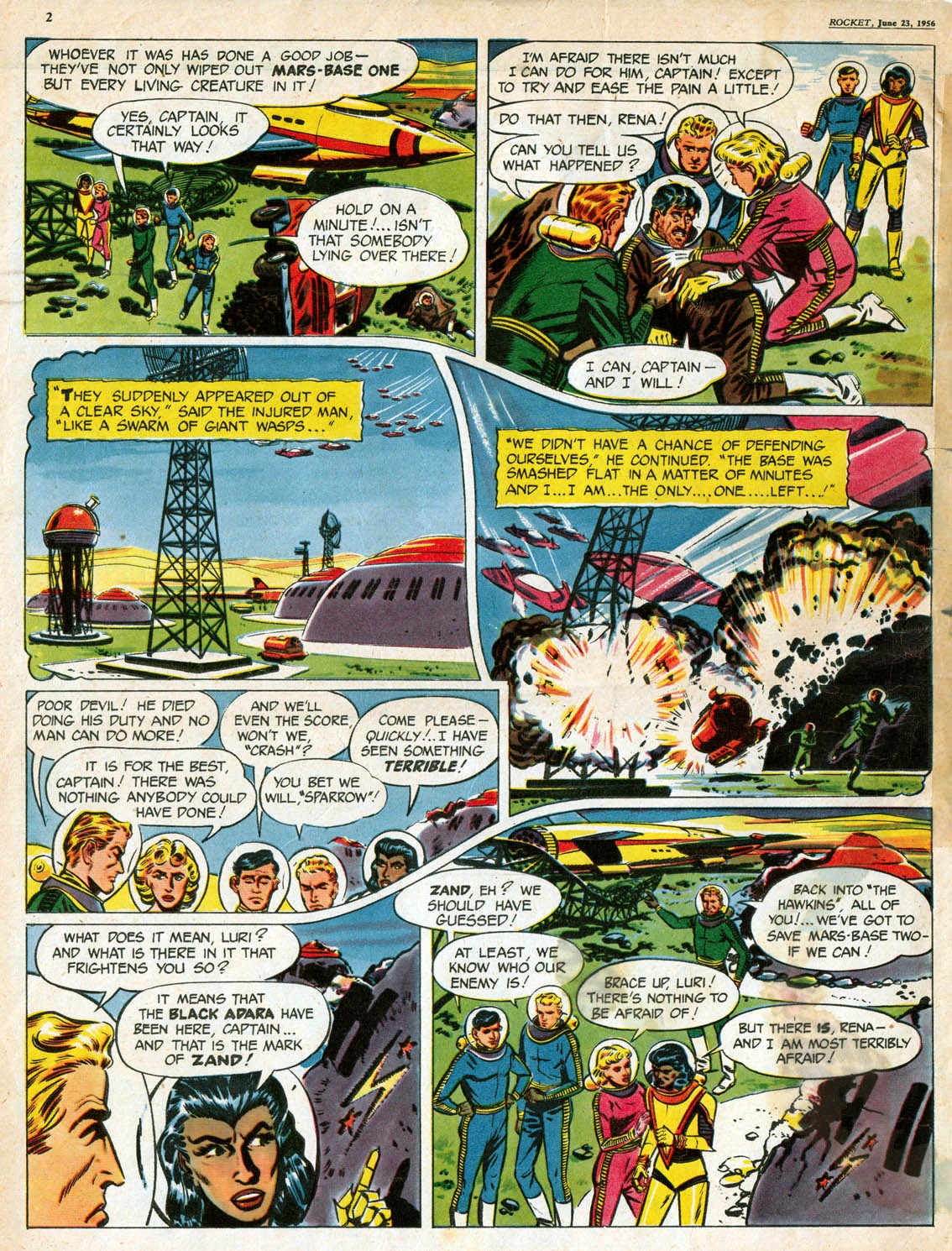 Rocket's budget was evidently lower than Eagle's too. Despite its slick printing and half of its pages in full colour, Rocket contained quite a few reprints from overseas. I'm not sure if Escape from Earth was one of them but I don't recognize the artwork and it certainly reads like an awkward translation... 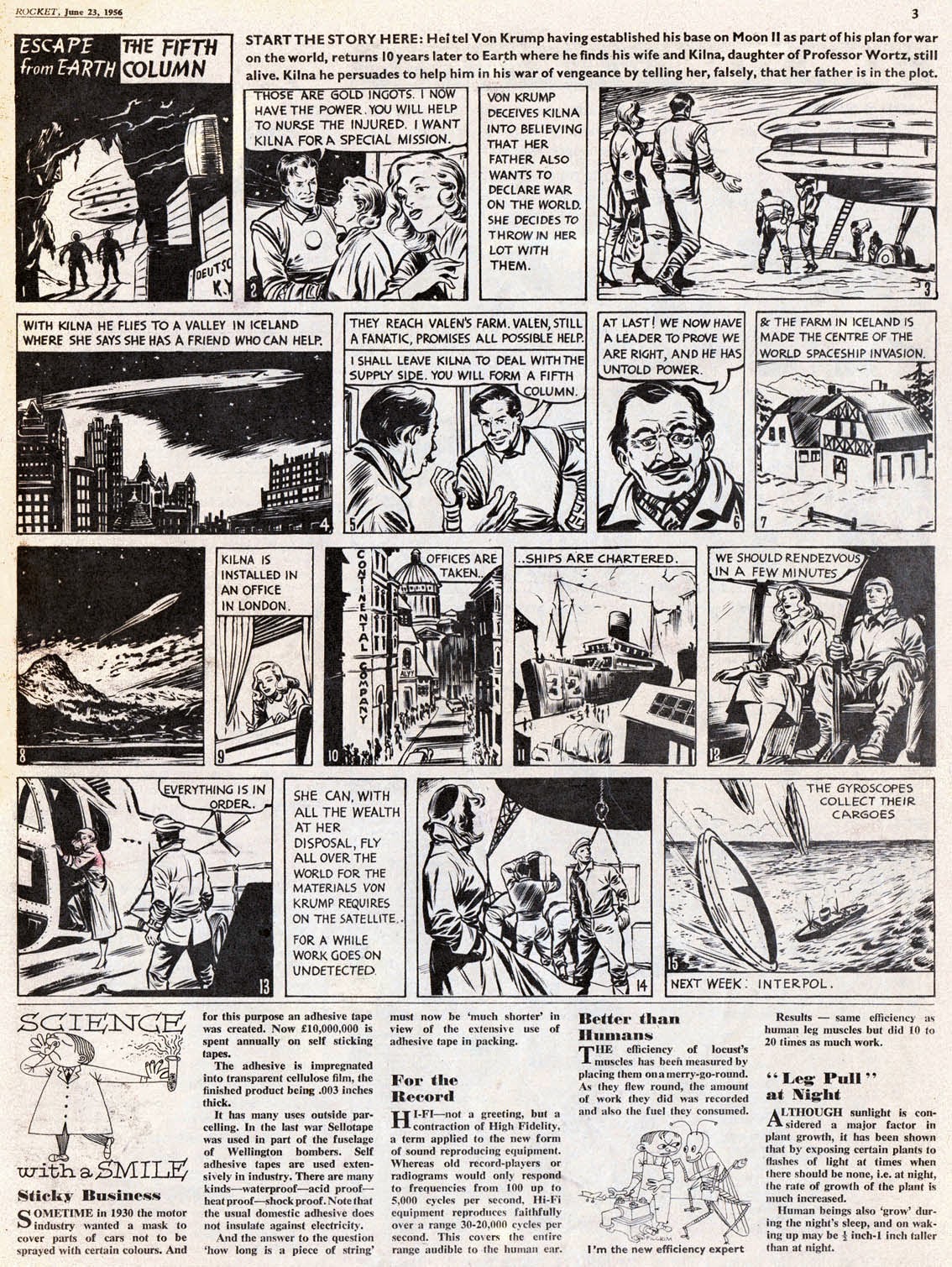 On page four, John Storm was a reprint of the Dutch comic strip Piloot Storm, with nice solid artwork by Henk Sprenger. (You can read more about the strip at the well researched International Hero site here: http://www.internationalhero.co.uk/p/pilootstorm.htm) 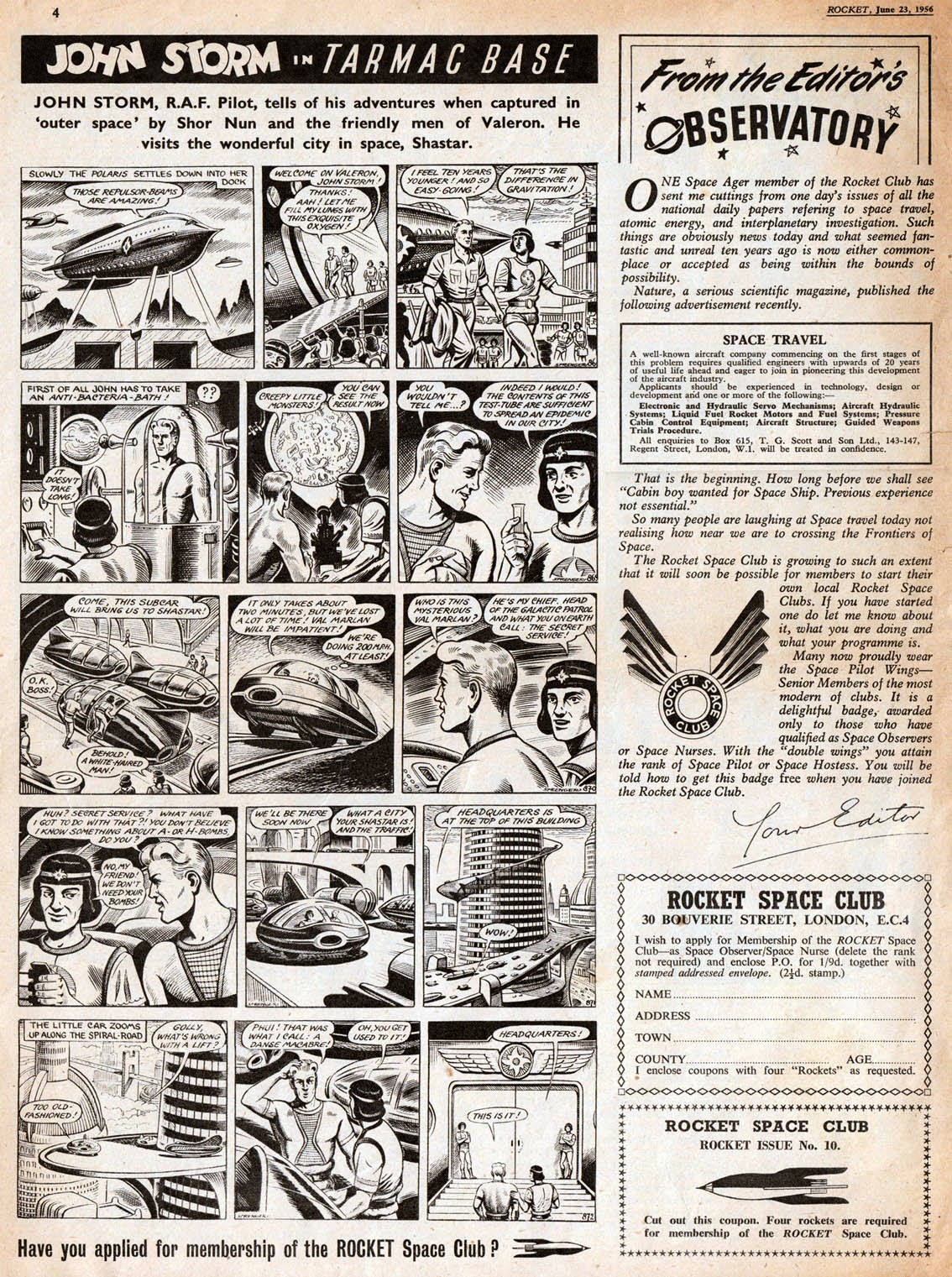 Across the centre pages of Rocket were two more reprints, this time from American Sunday newspapers. Flash Gordon by Mac Raboy, and Johnny Hazard by the often underrated Frank Robbins. Another US reprint, Brick Bradford appeared elsewhere in the comic. 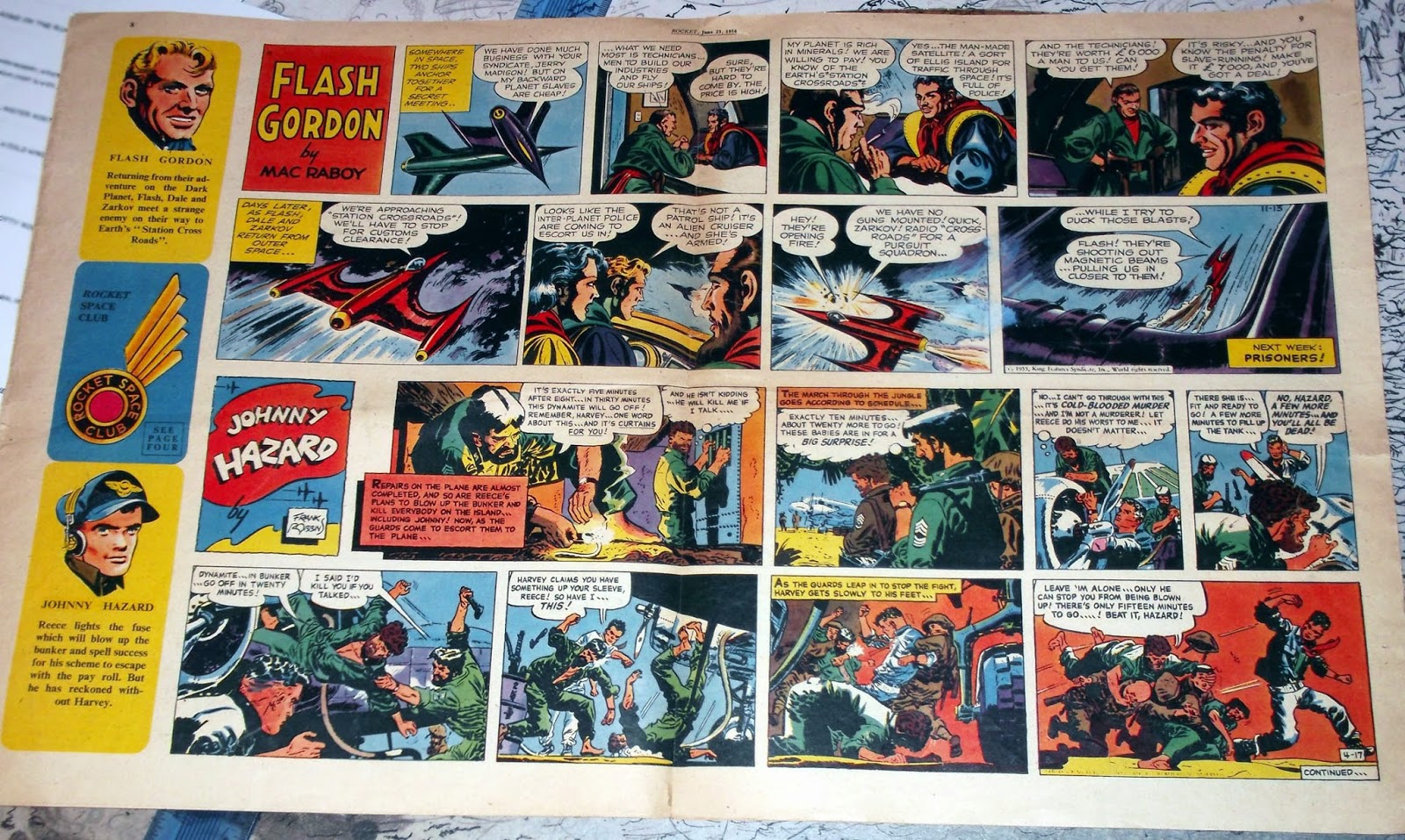 The only humour strip in the comic was the half-page Space for Laughter. (Perhaps Rocket might have been more successful of they'd found more space for humour.) Again, I don't recognize the artwork but the upside-down signature in the final panel is 'Kim'. 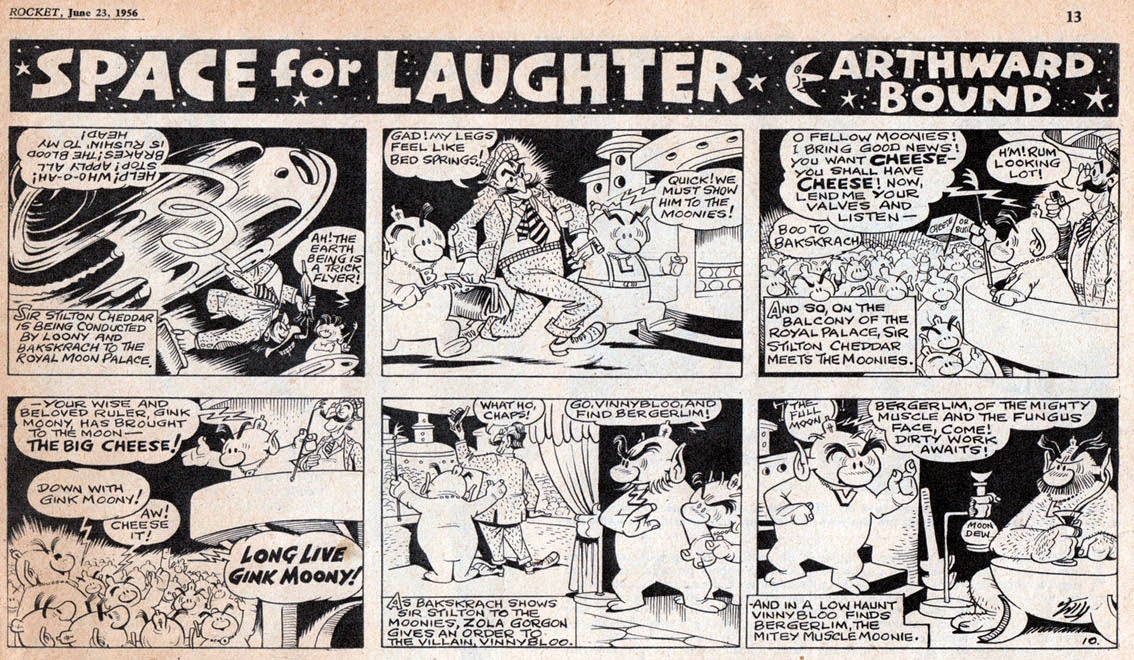 Rocket contained a few text stories and features. Here's one predicting Farming on the Moon! Ah, how optimistic Britain was 60 years ago... 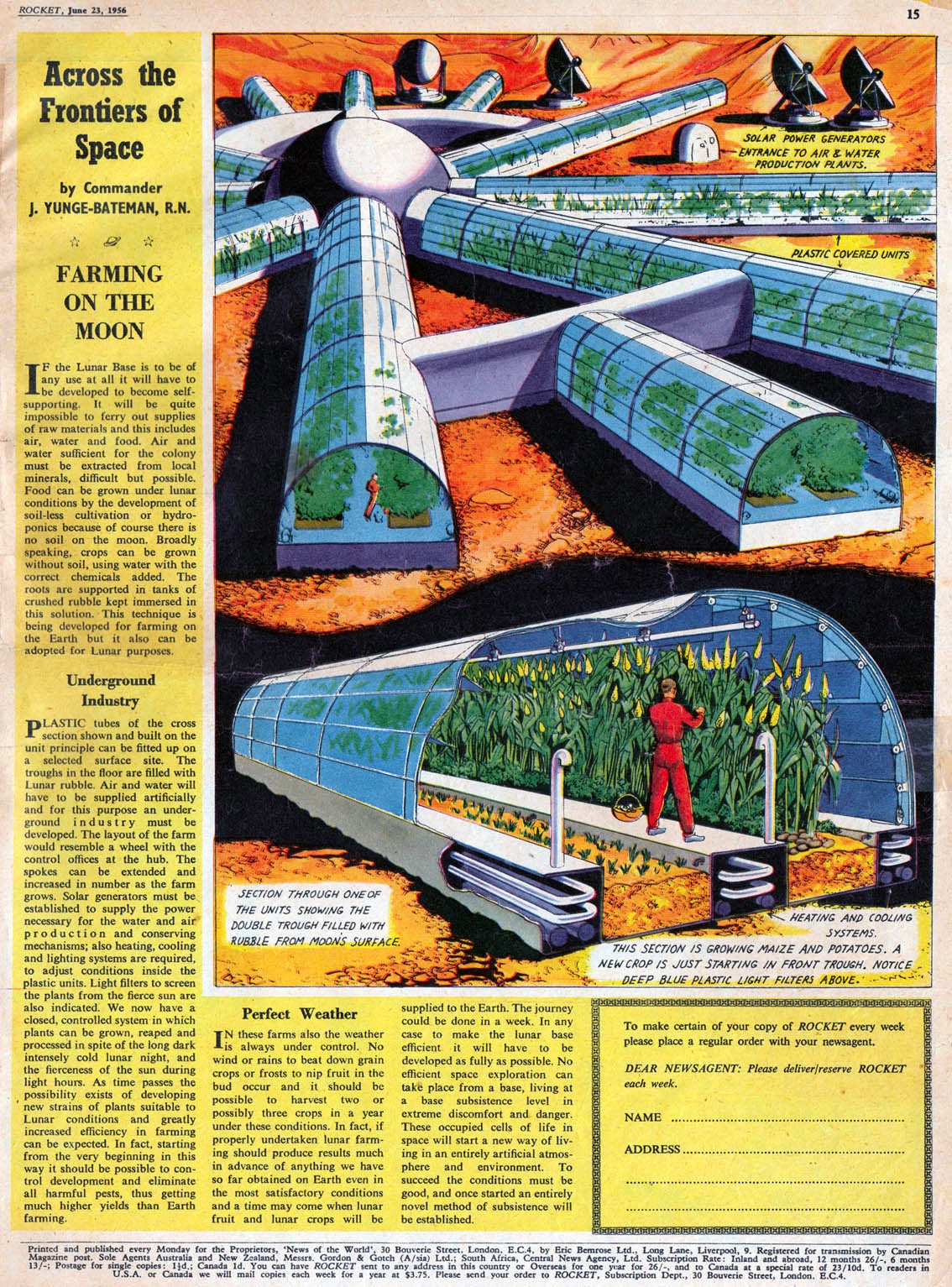 On the back cover was an excellently illustrated strip. The Seabed Citadel was apparently written and drawn by Ley Kenyon the famous diver and artist. (You can read more about him at this excellent blog:
http://robertmoubert.blogspot.co.uk/2014/08/the-art-of-ley-kenyon.html) 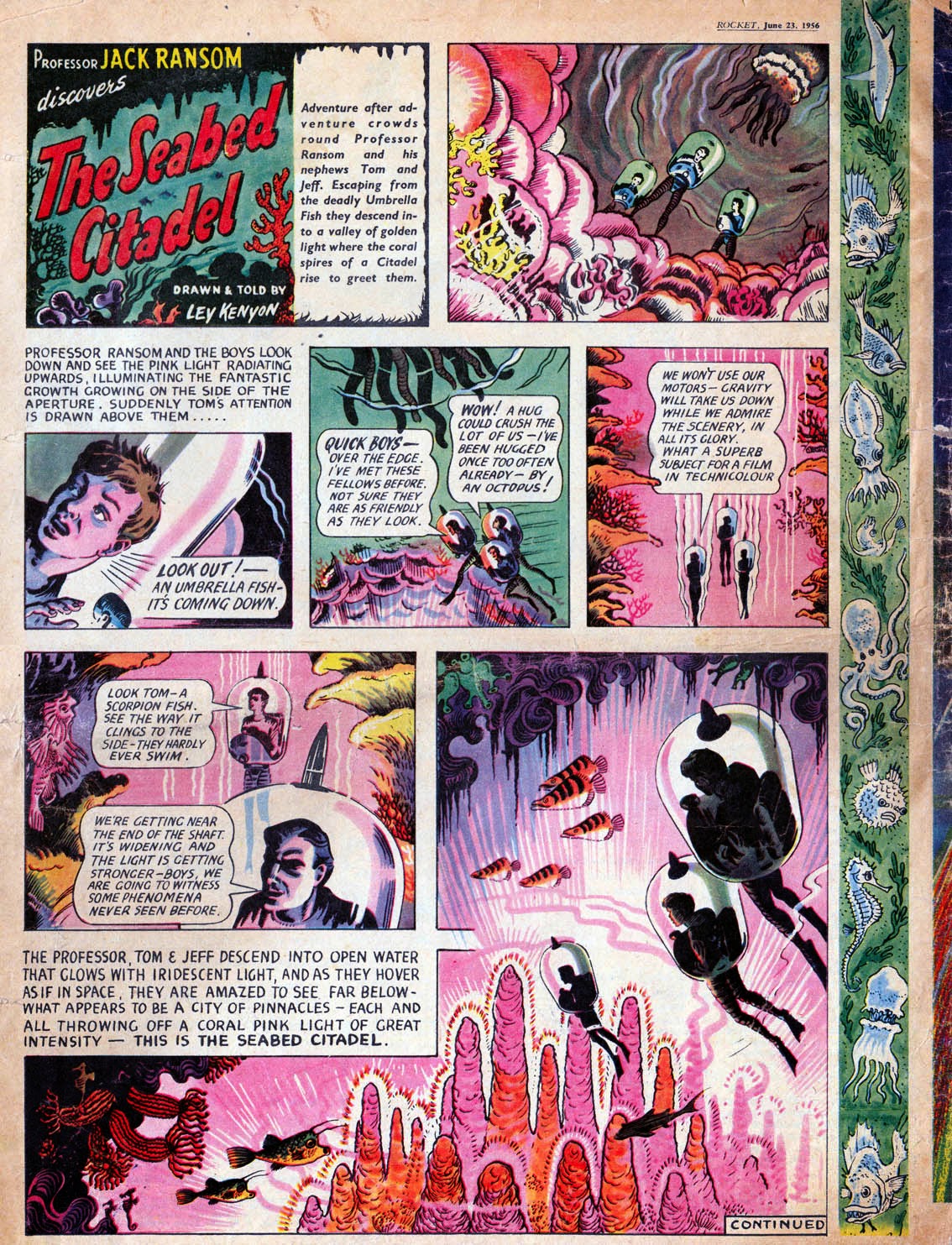 After just 32 weeks, Rocket was cancelled, merging into Express Weekly. Several years later Express (now titled TV Express) merged into TV Comic. Yet that wasn't the end of Rocket! If you have copies of Polystyle's 1971 spin-off from TV Comic, Countdown, take a look at the indicia. From issue 7 onwards (3rd April 1971) the official name of the comic suddenly became Countdown and Rocket even though Rocket wasn't named on the cover.

Perhaps Polystyle just wanted to hang onto that name to prevent rivals from using it? Or perhaps, as Steve Holland ventures in his book Countdown to TV Action, that they wanted to hold onto it in case they ever relaunched the title? They certainly held on tight. Even when Countdown changed its title to TV Action in 1972 the indicia still included Rocket...

Rocket was an interesting addition to comics of the 1950s, even though it wasn't as spectacular as might have been hoped.
Posted by Lew Stringer at 00:37

That's an excellent feature on a long-forgotten comic. I've read about it but i don't remember it from childhood...the reason, of course is its very short life .\it looked pretty good though.Let's face it...any of us would love to be able to produce artwork to such a high standard .The colour work was lovely too .What's this about Frank Robbins? both him and Macrayboy were brilliant . Robbins use of blacks is lovely and his lively impressionistic brushwork is full of pizzazz.I remember some of his work in the Marvel line later on too..Maybe he didn't neatly fit a required style ....just can't remember offhand which stories he worked on.

The artwork was great but when I said it was an inferior copy of Eagle I meant in terms of overall content and design.

I've always liked Frank Robbins' work but his Marvel strips used to come in for some bashing from people. Unfairly so I thought, because he'd obviously been told to follow the Marvel style which didn't suit him and it made some of his characters look awkwardly posed. Also, he was being inked by Vince Colletta on some strips which didn't help. Robbins drew The Invaders, the Human Fly and some issues of Captain America, amongst others for Marvel.

Most people preferred Kaluta's version of The Shadow but I always liked Robbins' version best. He did some nice work on Plop! comic around that time (1974) too.

Do you know what Lew...sometimes i think we are all spoiled for choice with some of the great artwork styles. A lot of people don't appreciate how hard some of this stuff is to do.i loved Kirby and Ditko for example and i suppose we assumed that was the "marvel style"...but really these two were very unique...two very individual styles. Kirby was copied to distraction ...even barry Smith started as clone..but he spread his wings eventually. My greatest revelation was seeing the first issues of Metal Hurlant and realising there could be so much more .

Lew was Rocket the same size as the Eagle?

This answers a puzzle to me as to where the "....And Rocket" came from in Countdown!
Always interesting to learn of a comic I didn't know about.
Now, off to check those links!

Add me to the Frank Robbins fan club - both on The Shadow and The Invaders.

Lew you asked for requests recently. Can you just stick to comics we know about please? Comics before my time don't interest me.

Three points, Anon.
1: How could I possibly know which comics you know about?
2: My purpose in doing this blog is not just to rekindle nostalgic memories but to inform readers of the whole history of British comics. That includes comics before our time.
3: If there are posts that don't interest you, don't read them. You can't act as a spokesperson for everyone.

I bought every copy of Rocket and was sad when it folded. I wish I'd kept them. Didn't it have a text story about a space-age academy called St Rockets or something? Basically a school story in the Billy Bunter tradition.

Yes, that's right Fred. It had illustrations by Eric Parker.

I too had every issue of 'The Rocket' back in the 1950s. Loved it as I was heavily into science-fiction rather than the more popular cowboys n' indians of the day. Wish I still had those old issues. Have been trying to find a copy or two but it seems to be a very rare publication. Someone should try to collect all 32 issues and reprint them as a commercialy available book. Nice to see this article on 'The Rocket.' Very well researched.

Thanks. I would imagine it'd be difficult and expensive to sort out the rights to reprint all that stuff so a collection is unlikely.

I'm not sure that Rocket was unsuccessful as such, but it might not have been successful enough. It was launched leading in to that period where the family who published the News of the World decided they no longer wanted to be involved with comic titles. Printer Eric Bemrose was proactive in keeping Express Weekly and TV Comic alive (and possibly another nursery leaning TV title which later merged with TV Comic). For a spell, Bemrose was publisher. Rocket didn't survive this shuffle and the merger with Express was name only. If different carts were pulling different horses, Rocket might have lasted longer. Some of the folks working there say the end was abrupt.