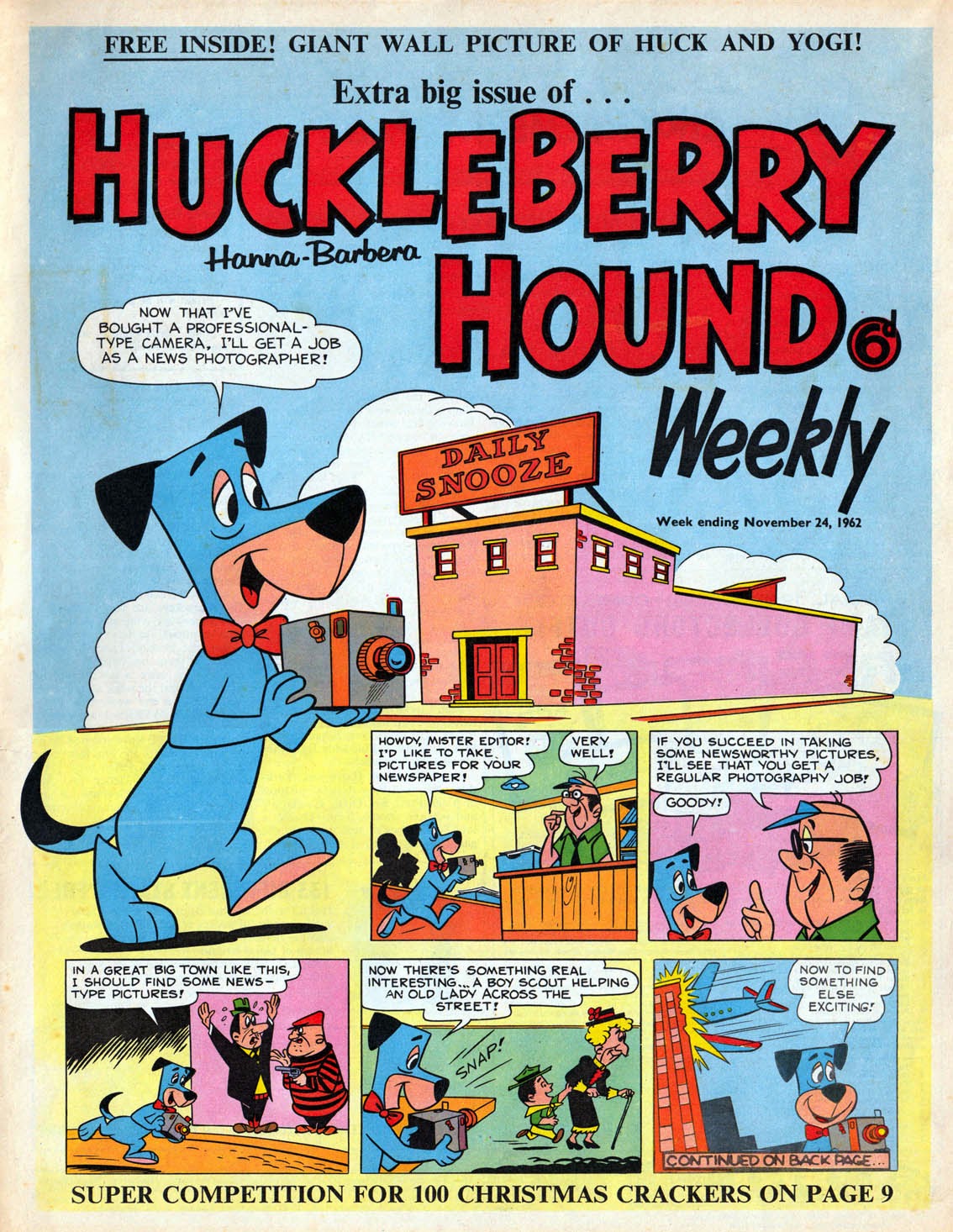 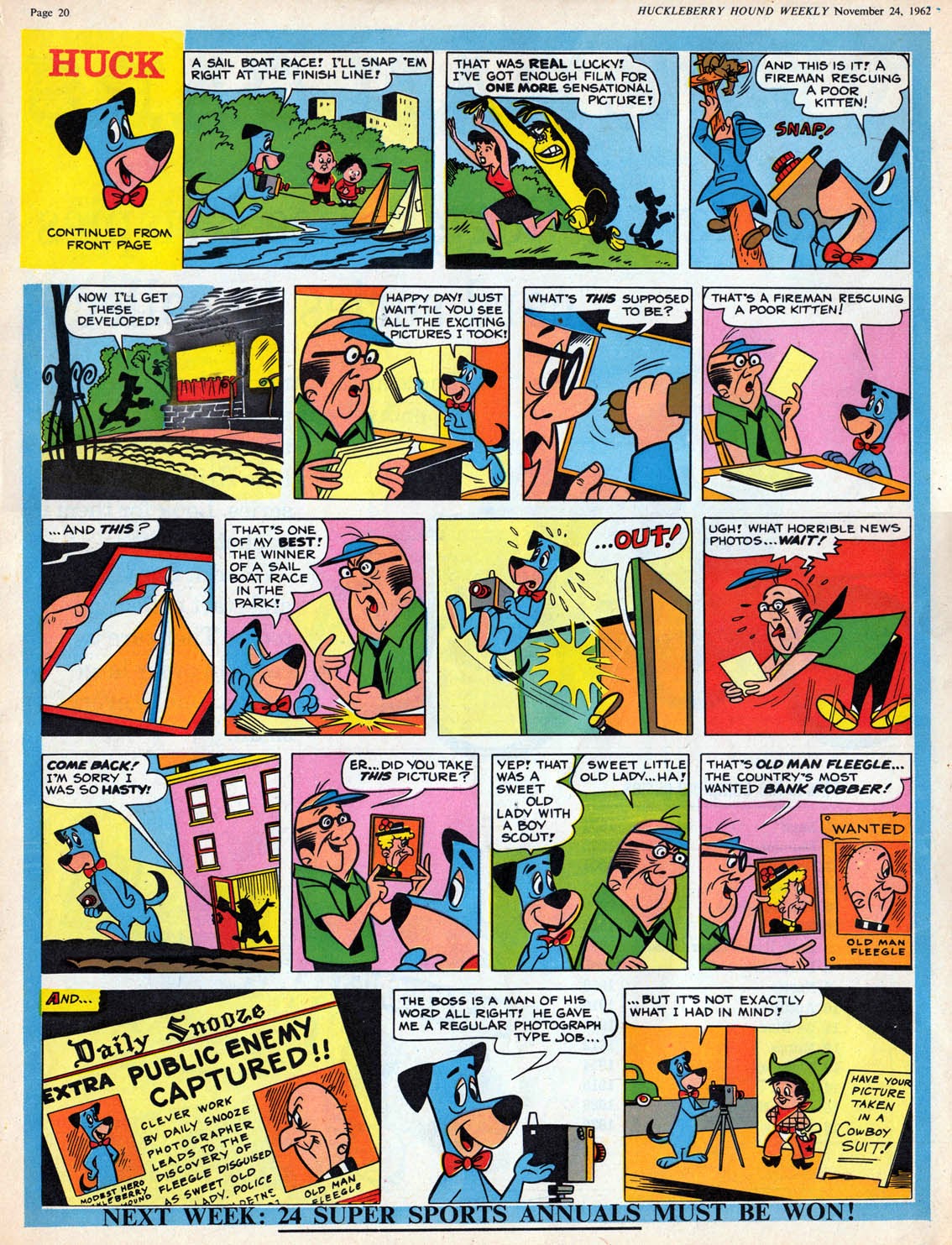 Capitalising on the very popular TV cartoons produced by Hanna-Barbera, Huckleberry Hound Weekly ran from 1961 to 1967. Published by City Magazines of London, the 16 page tabloid was printed photogravure in a style and format that City would also use for TV21.

Huck himself starred in his own strip on the covers (see above) and the contents featured various other Hanna-Barbera characters of the time such as Augie Doggy... 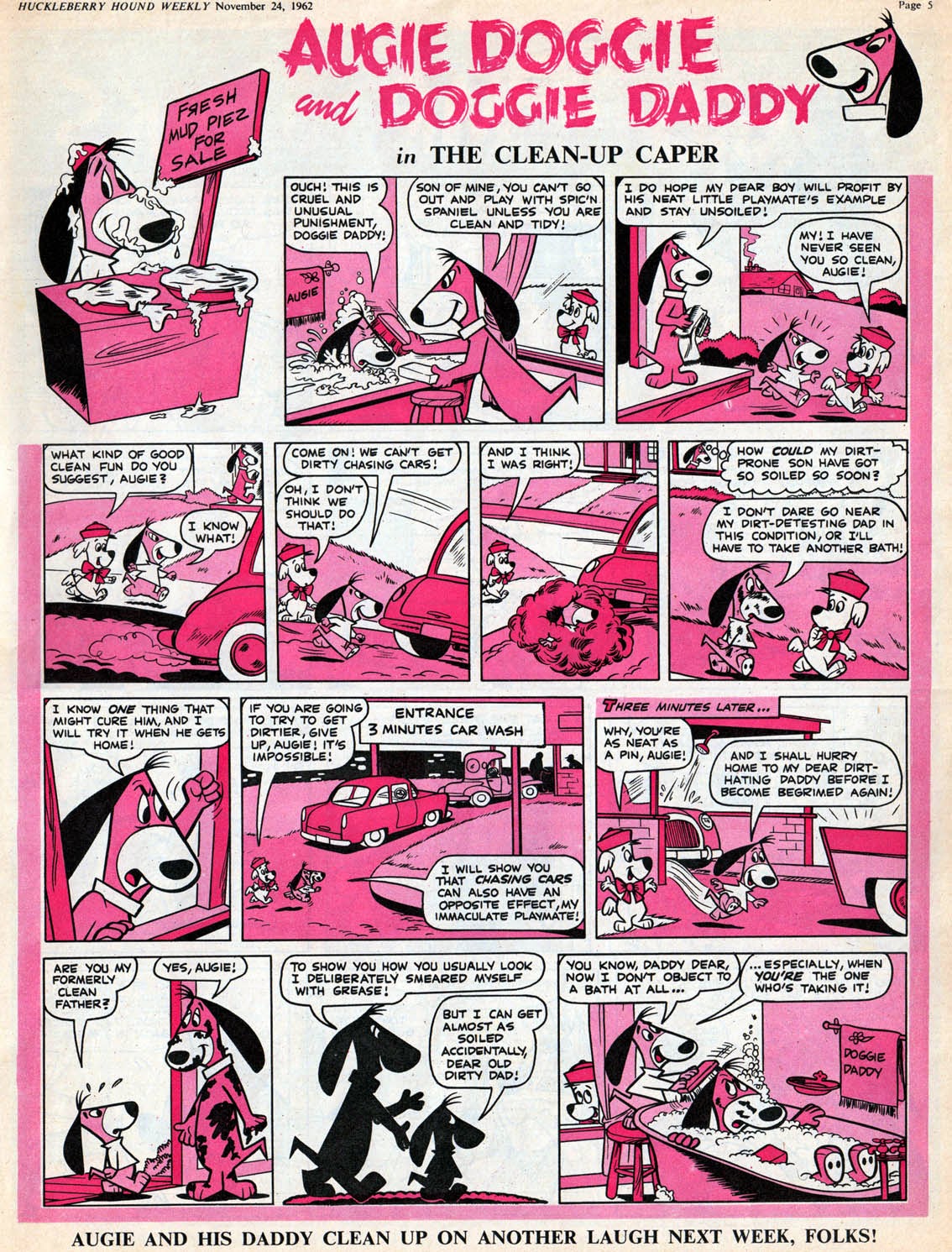 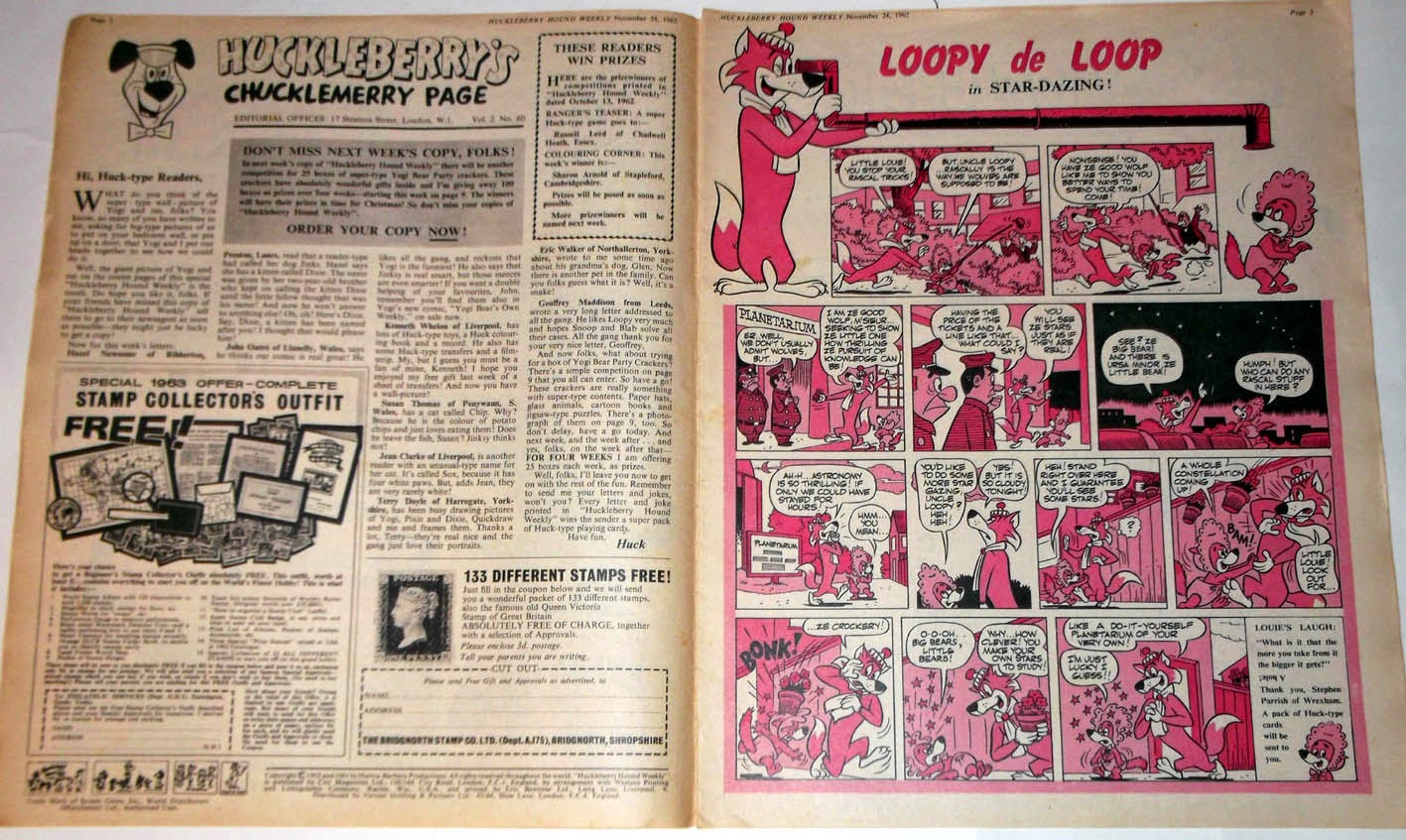 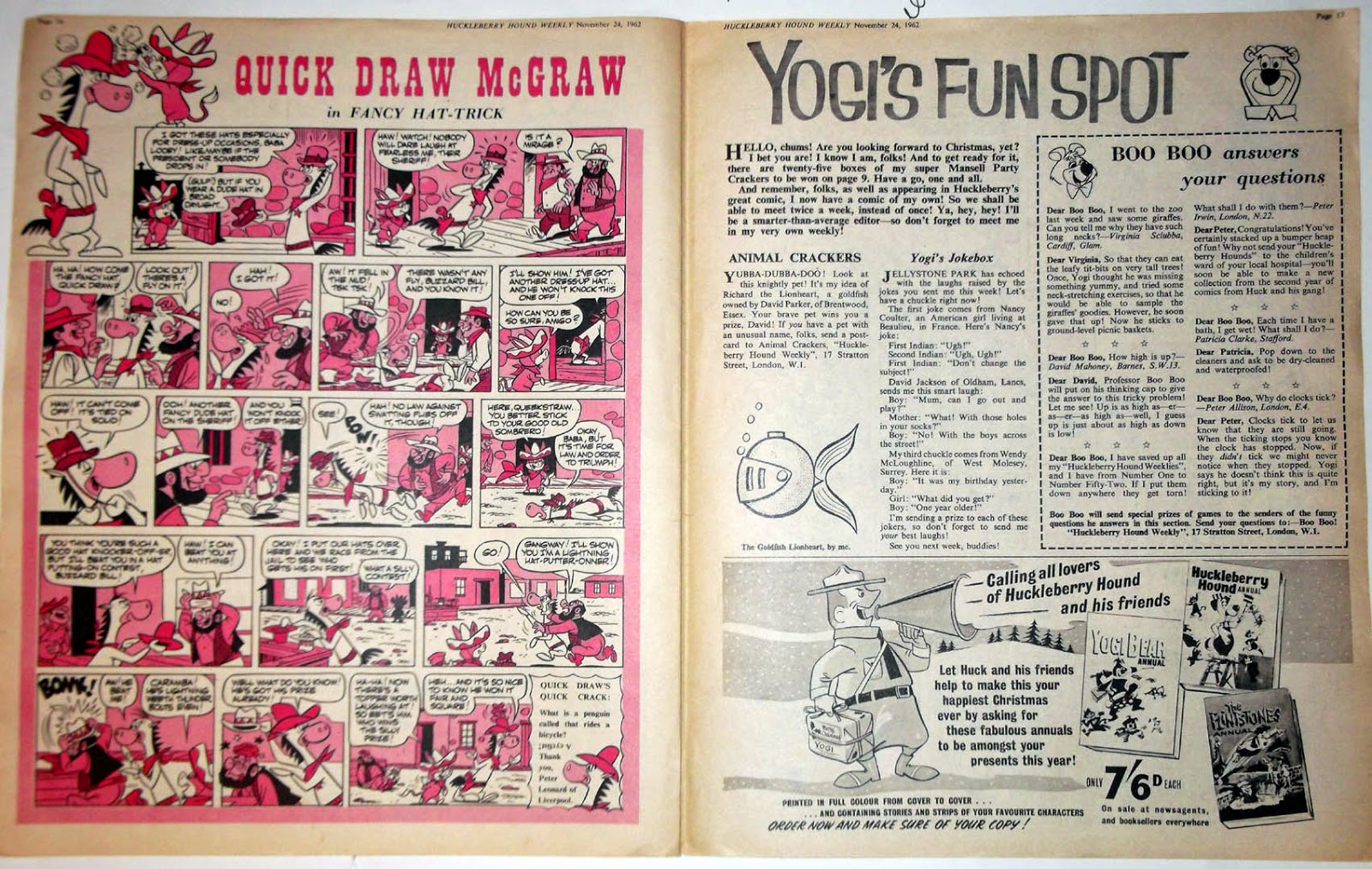 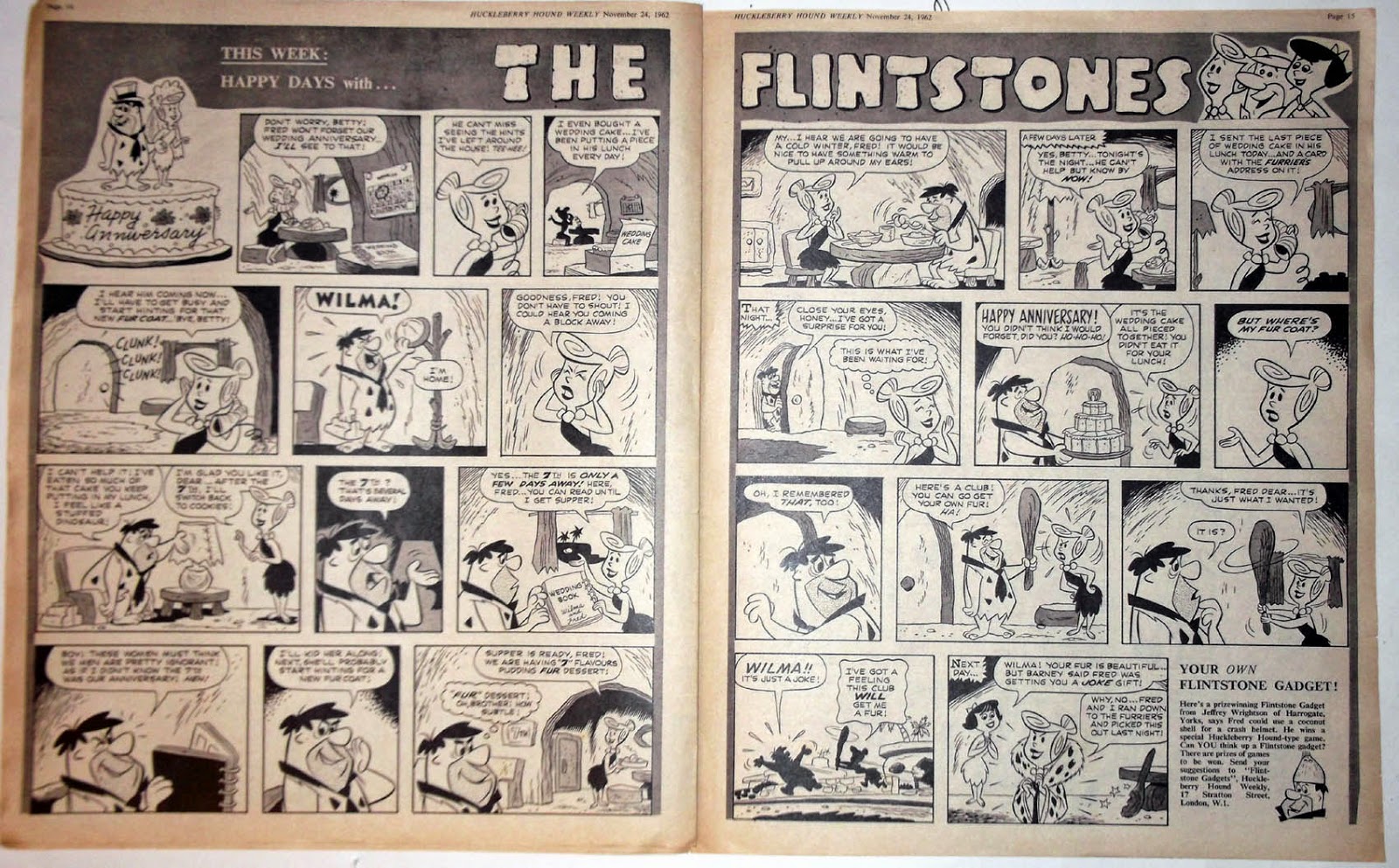 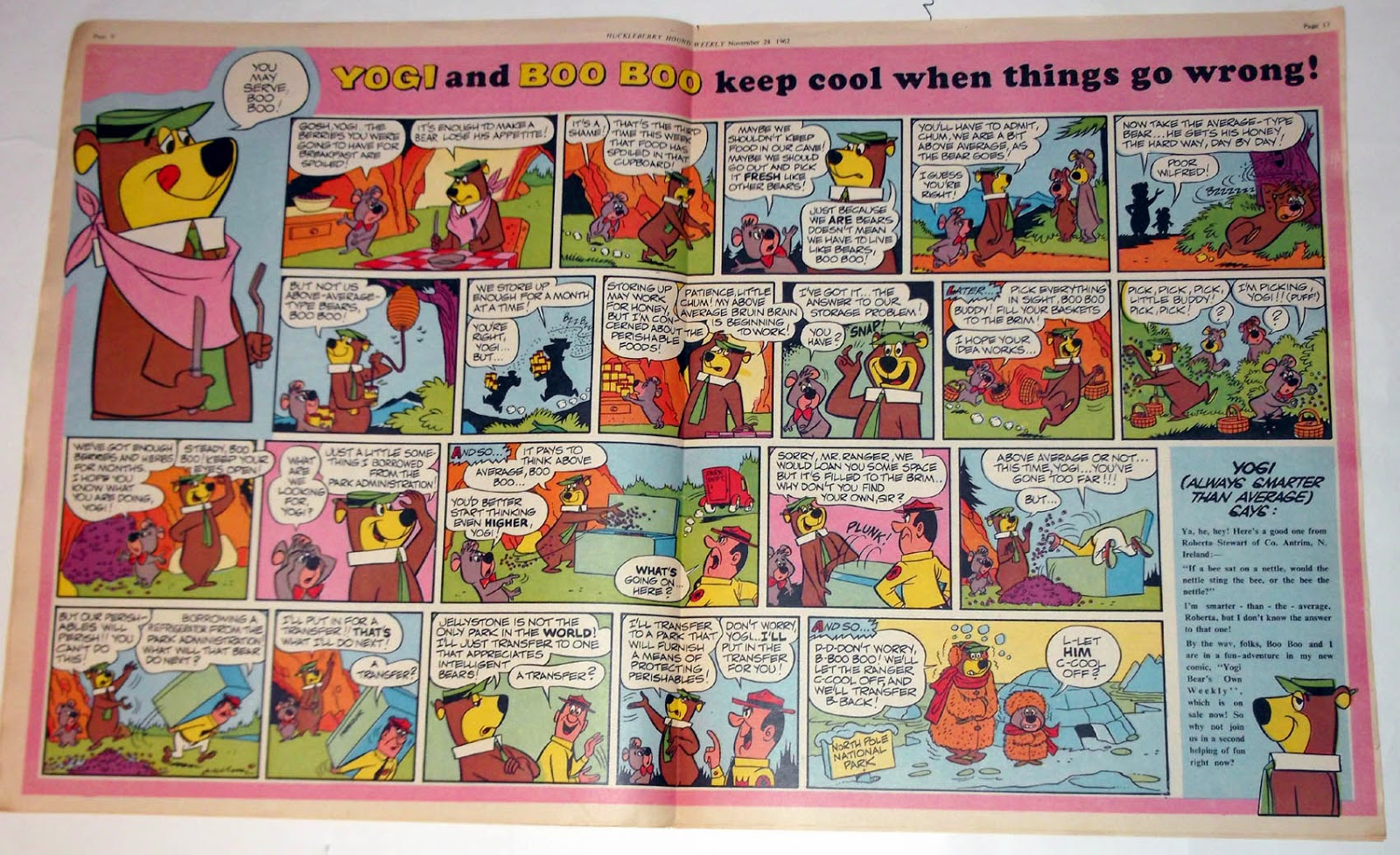 The strips seem mostly to be edited reprints from the American comics published by Gold Key, although I suspect some were brand new ones originated in the UK.

Yogi Bear also had his own comic (actually called Yogi Bear's Own) which ran from 1962 to 1964 and then merged into Huckleberry Hound Weekly.

I suspect the fortunes of Huck's comic were not so good by the mid-sixties as by 1966 it had shrunk to traditional comic size and put its price up by a penny. Here's the covers to the issue dated April 23rd 1966. This is definitely a home grown strip, complete with British bobby in the final panel. I don't know who the artist is but it's somewhat rough around the edges and short on background detail... 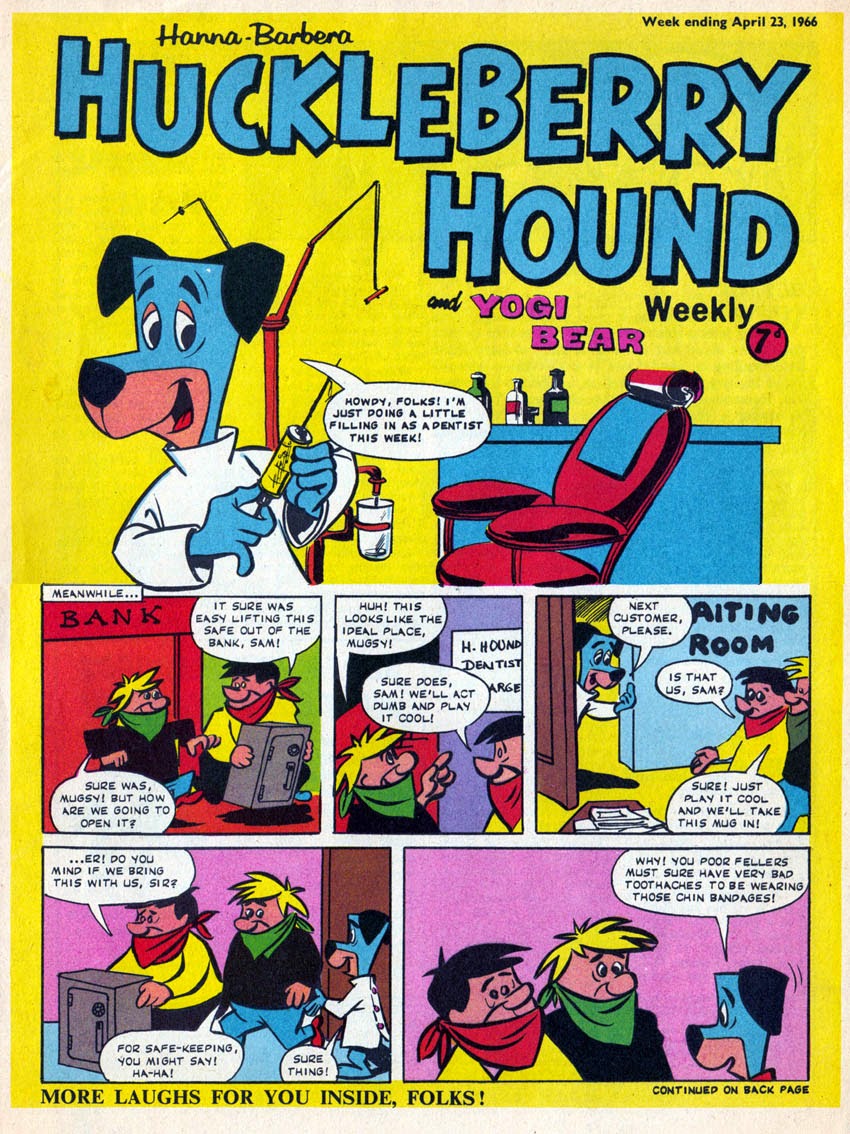 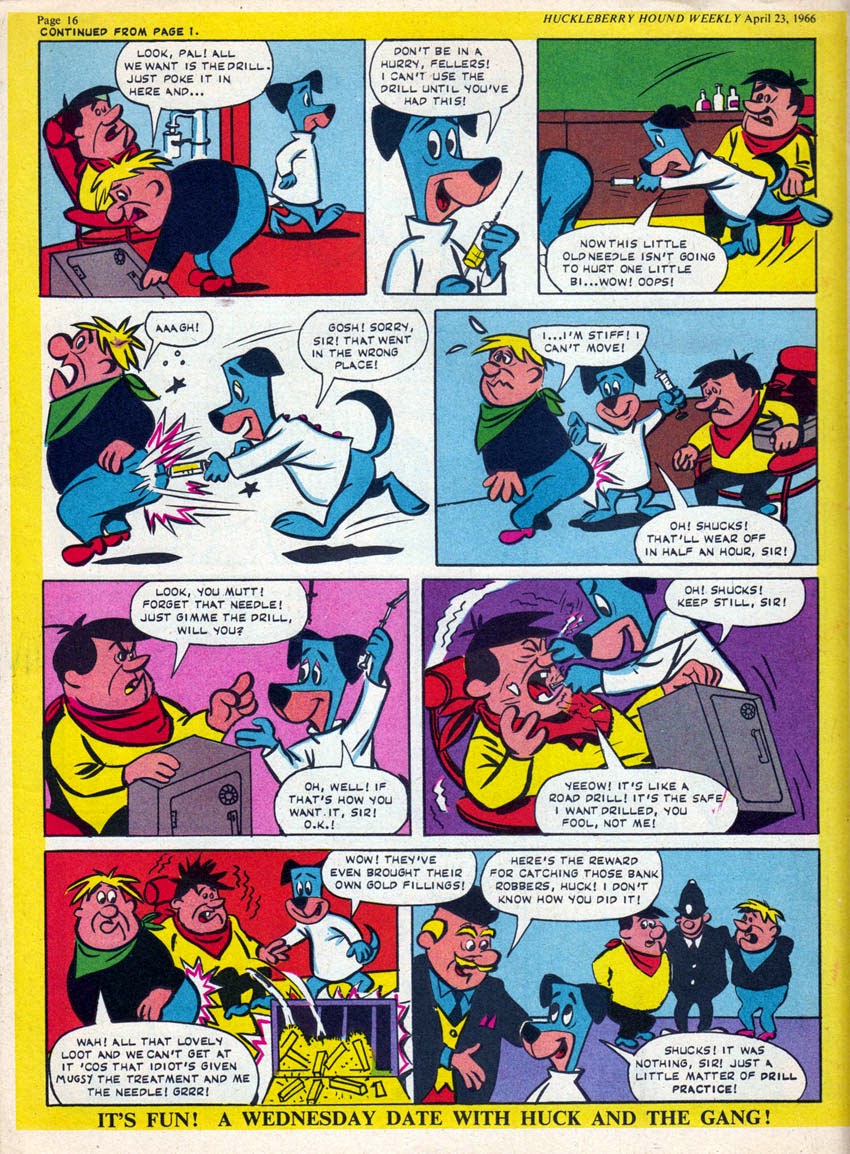 The strips inside were of a similar reduced quality during this period... 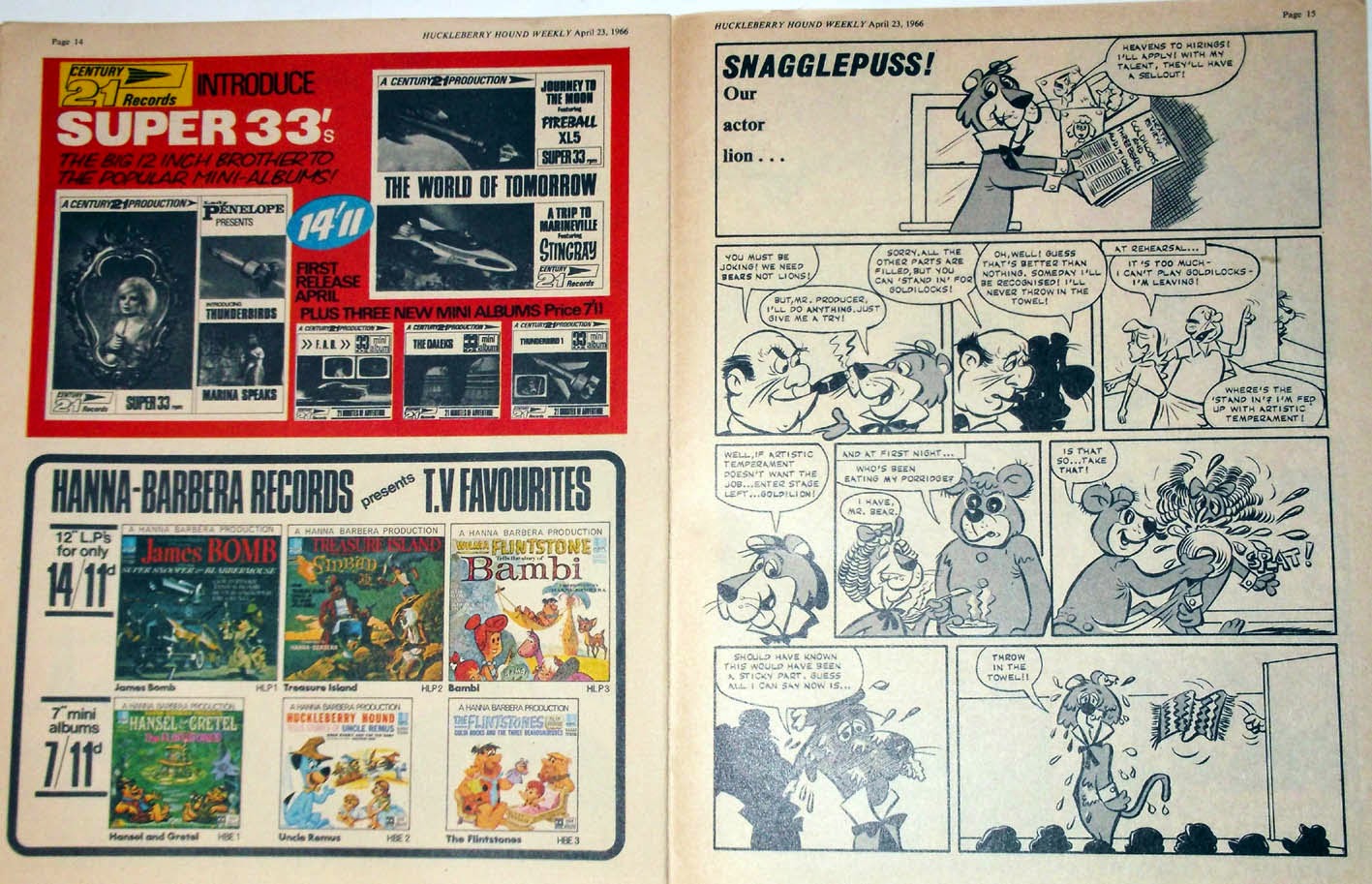 By 1967 City were no longer publishing Huckleberry Hound Weekly and it had been taken over by Robert Hayward and Sons of Manchester. The comic returned to tabloid size but was no longer glossy. With Huck no longer as popular as he was, the covers now featured a jumble of character shots and copy in a bid to attract new readers. A huge 'TV' icon was added above the logo to grab the attention of the telly-obsessed generation. Any long standing fan of Huck would be disappointed by now though as some issues didn't actually feature a Huckleberry Hound story! 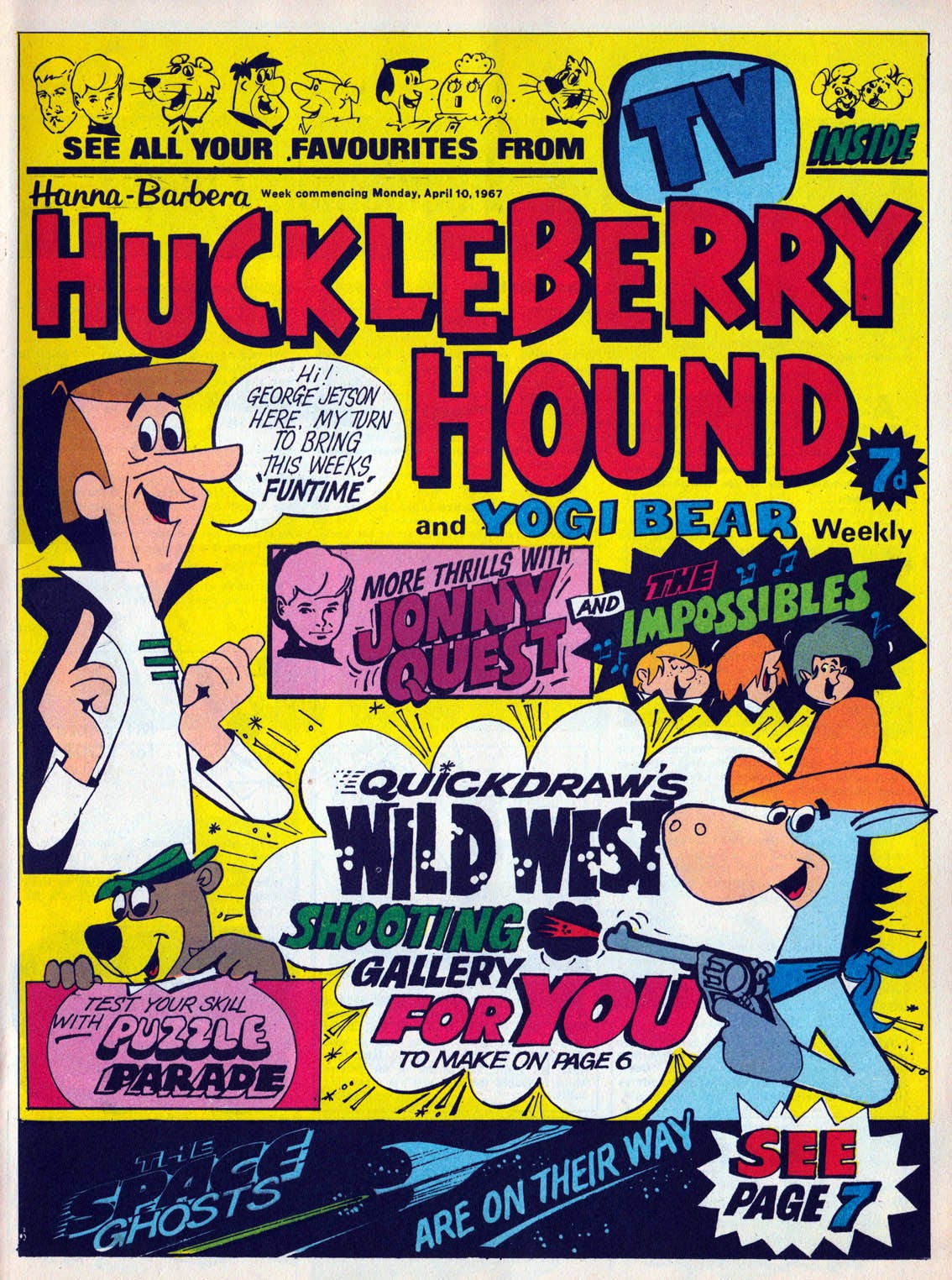 Adding some adventure to the lineup, Jonny Quest had been included. I presume these were reformatted from American comics... 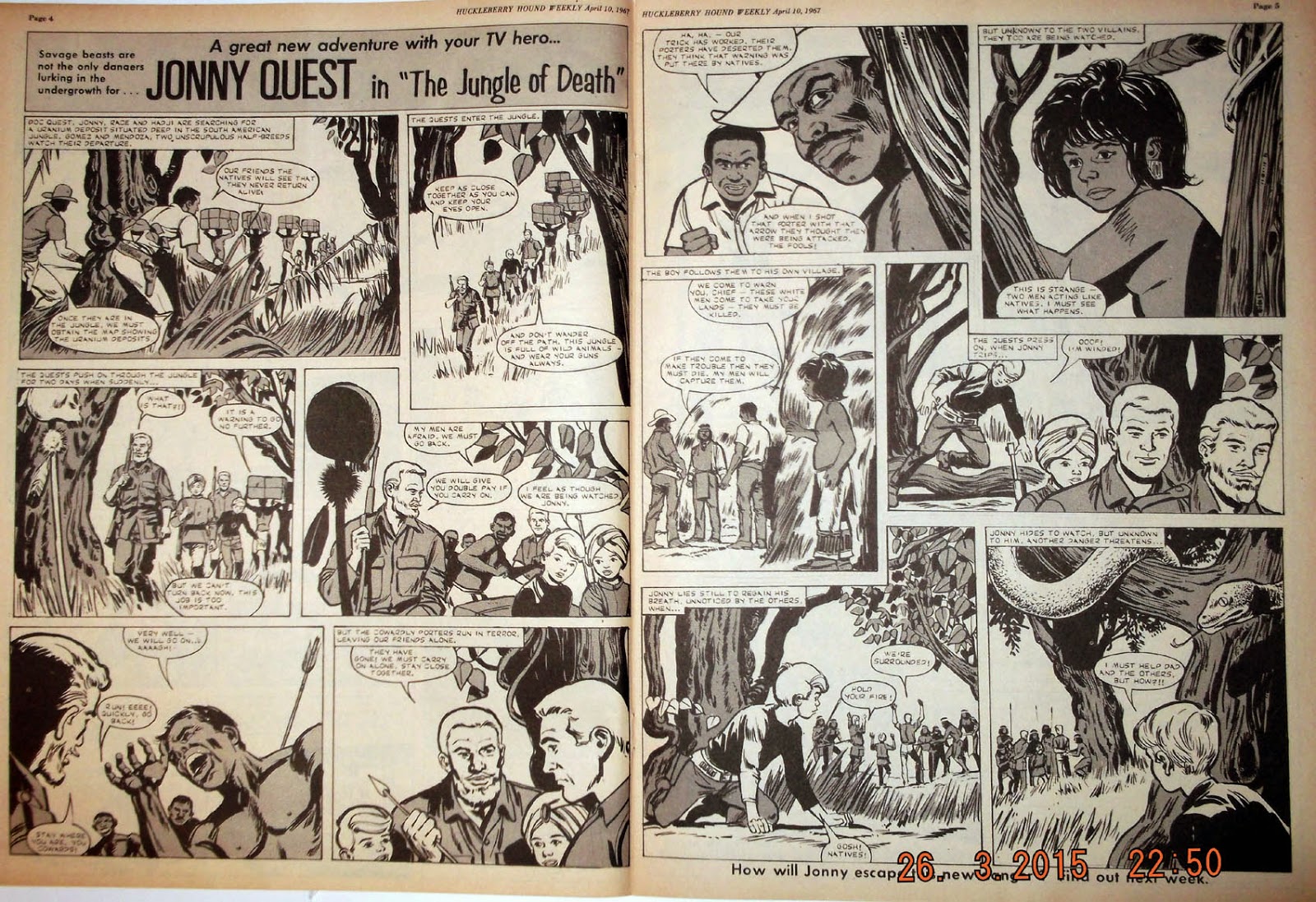 Stars from new cartoon shows arrived, such as The Impossibles. (Although if I remember correctly, The Impossibles wasn't on TV in every region at the time.) 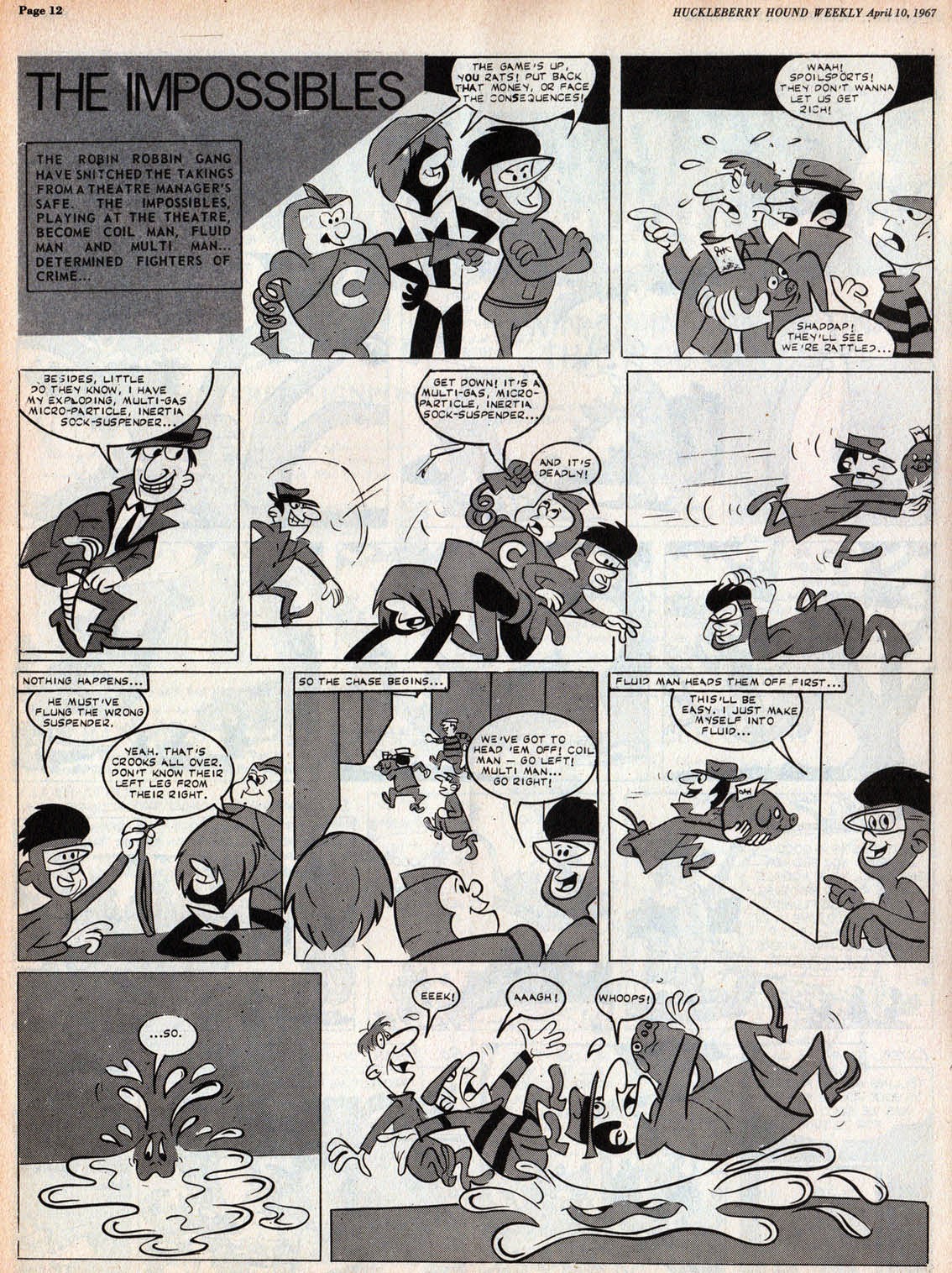 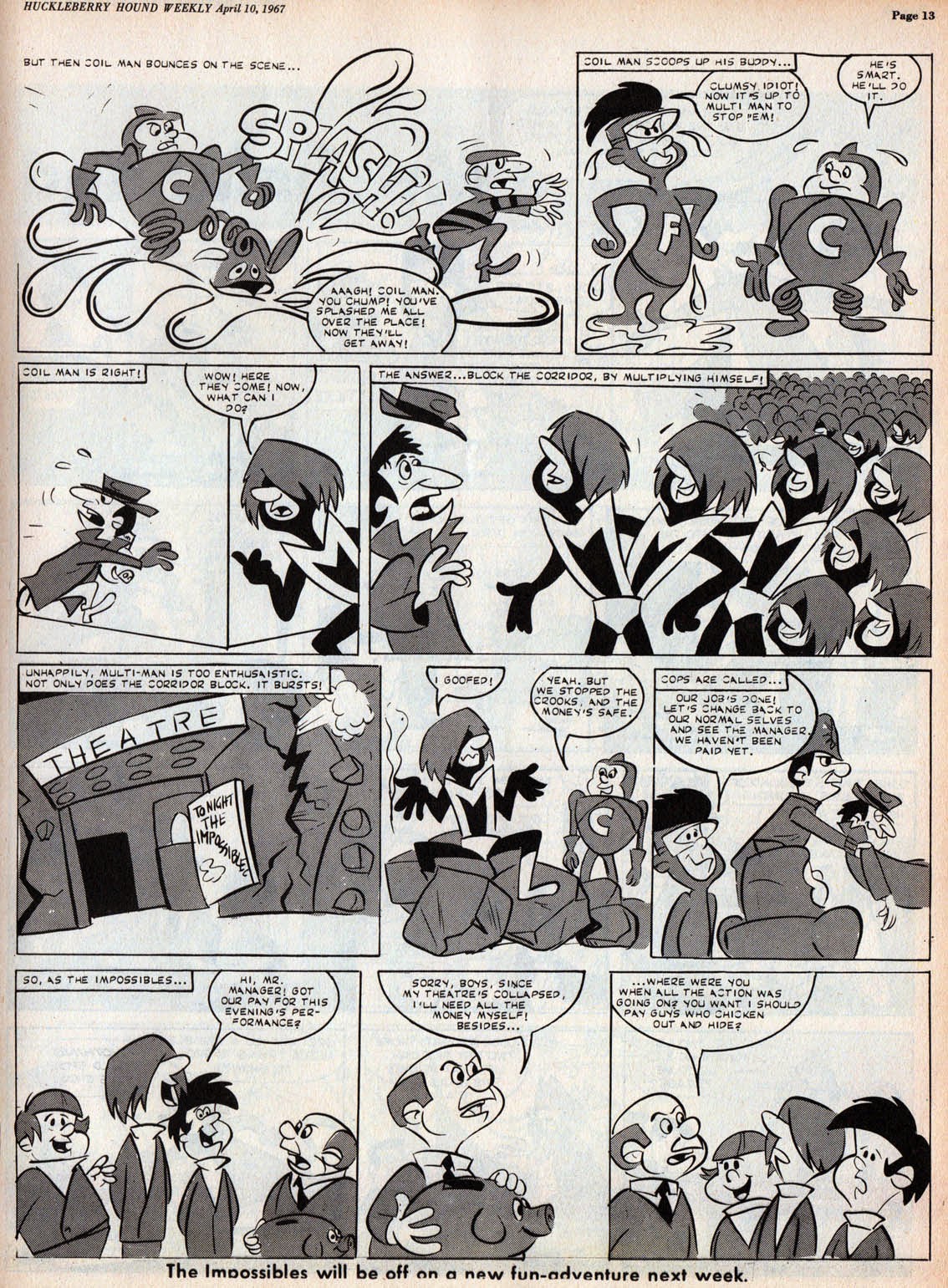 With the issue dated April 17th 1967, Space Ghost made his debut. Based on the Hanna-Barbera cartoon of course but I suspect the publisher was also trying to get the attention of the growing readership of superhero comics. (Fantastic and Terrific had launched around this time too.) 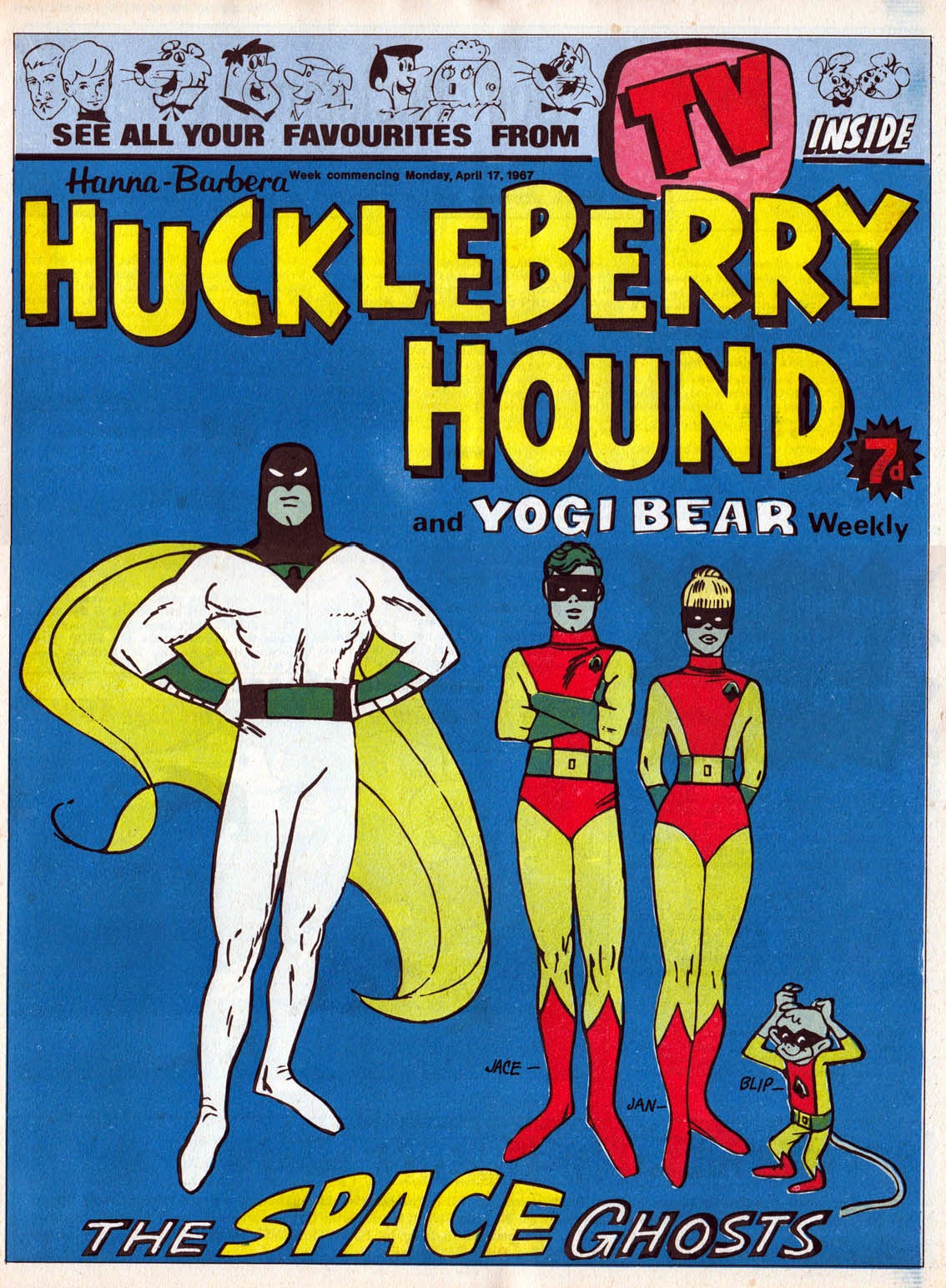 The Space Ghost strip bumped Yogi Bear from the centre pages. Notice anything odd about the strip? Yep, they made a hash of the colour, giving the scaly aliens pink skin and our heroes green skin! It looks like the printer transposed the red and blue overlays, but the mistake was repeated the following week so it seems deliberate. 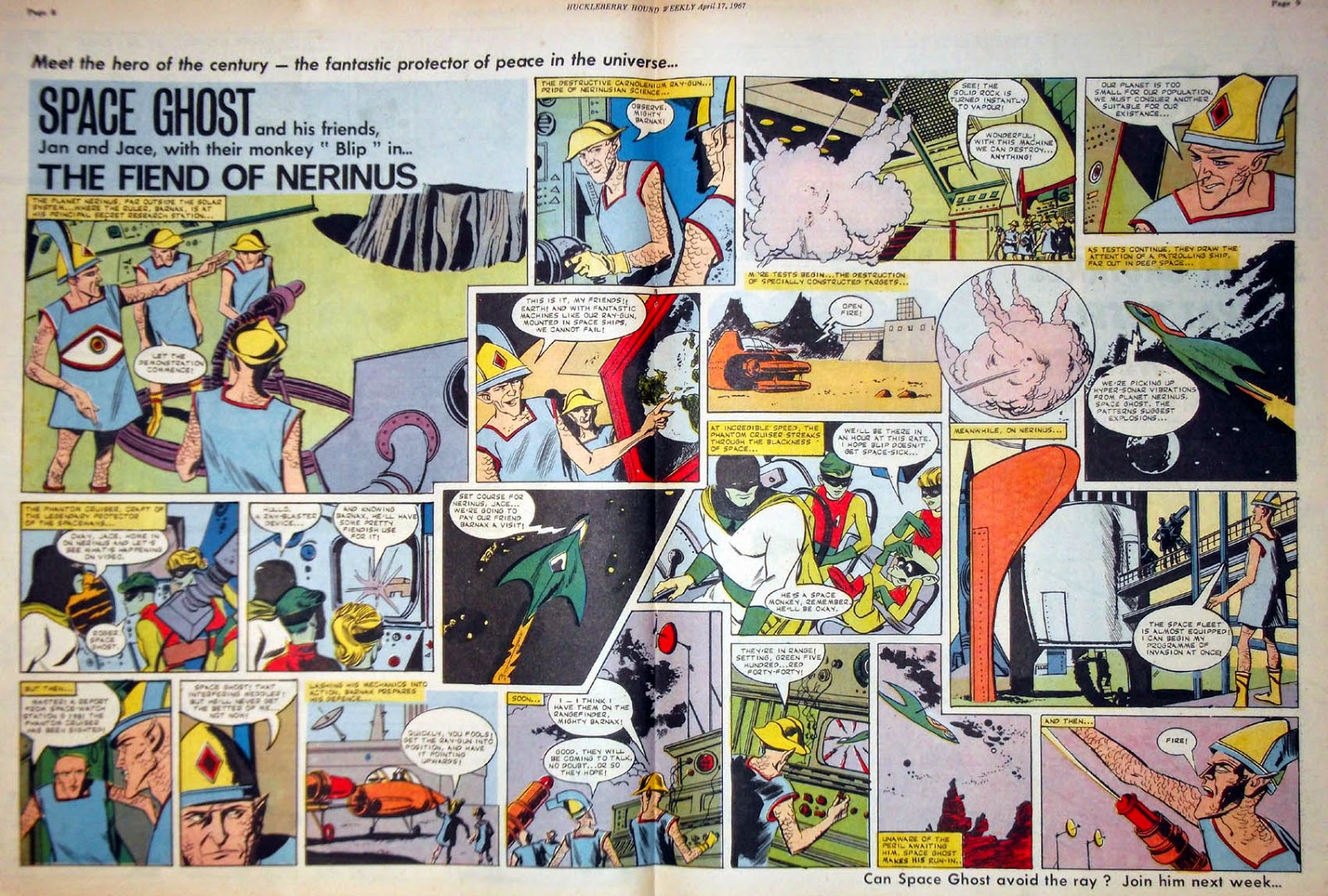 At least they remembered to include a Huckleberry Hound strip that week, but sadly by now it was reprinting old covers. Several other pages seem to be reprints from a few years earlier too. 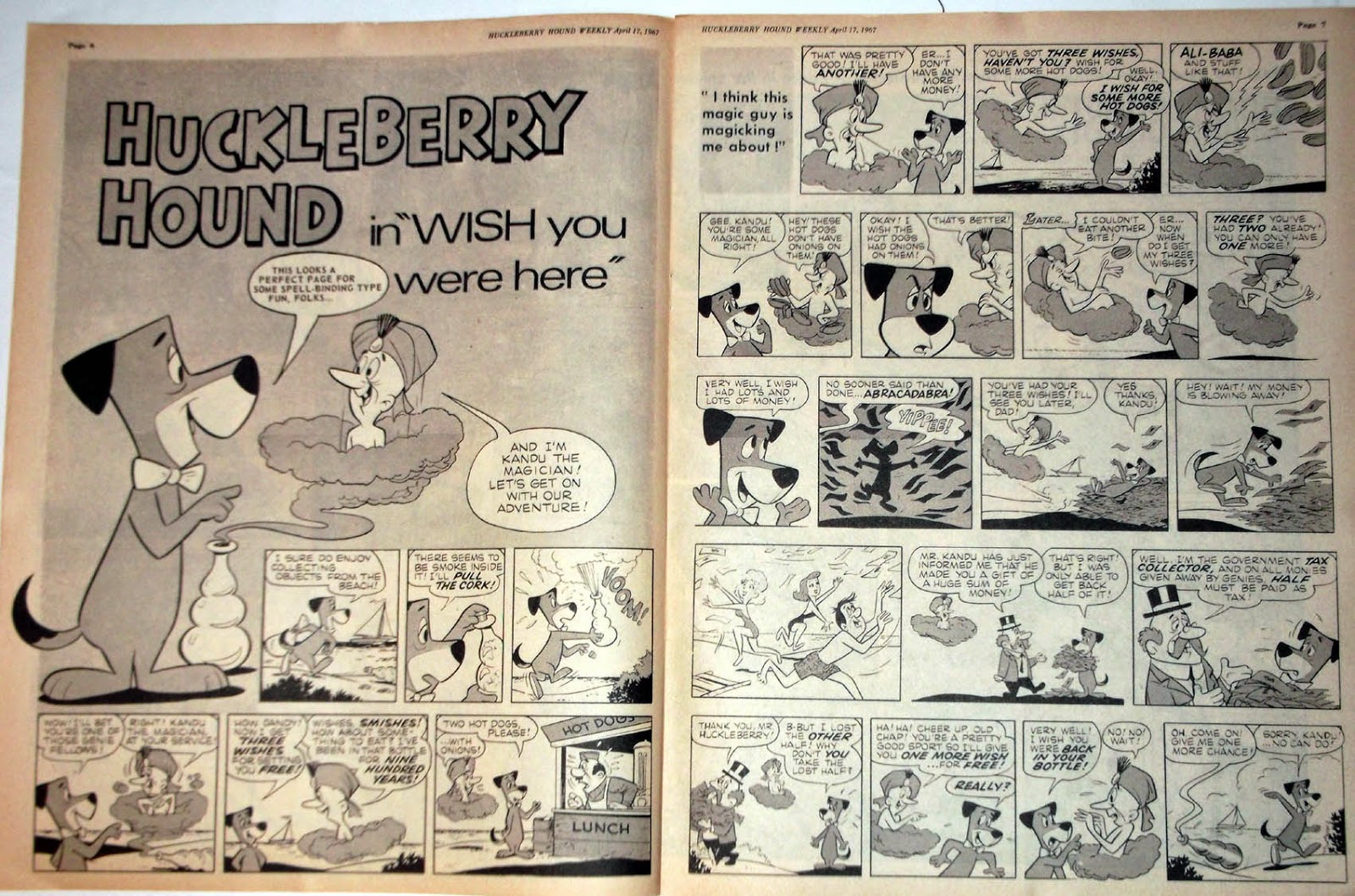 It won't surprise you to hear that the comic folded a few months later, which was a shame. Huckleberry Hound Weekly started out as a very nicely produced comic but after a few years the quality dropped considerably. Still, it managed to reach 308 issues in total which wasn't a bad run by any means.
Posted by Lew Stringer at 00:34

THANKS, THANKS for this comprehensive history of the second comic I had a regular order for, ( the first being Harold Hare's own paper ) and for remembering to do this post and keeping your word, Lew.
You've told me far more than I remember, butfor anyone else interested, Mr. Jinx/Pixe & Dixie and Snooper & Blabber were also regulars in those early days.
For me, this love of HB led to me also buying the Dell comic books and I also added their TV westerns. I later ditched them all for DC and when I also discovered Marvel via Smash, well the rest, as they say....
But, in a way, Huck - I owe it all to you!
Cheers, Lew, nice one!

You're welcome John. I don't have many copies of the comic but enough to do a basic article.

Perhaps I should have included images of the Pixie and Dixie strip too but there were already a lot of images on this post so I chose not to.

I didn't follow the Dell and Gold Key humour comics as a kid but I had a couple of UK annuals that reprinted them. Recently I bought a cheap stack of a Gold Key humour titles and was very impressed by them.

The last 2 issues look excellent, lovely design/layouts - I have only a vague memory of this comic and the cartoon show so it was really nice to see it here and some of the contents ( all looks great stuff) I used to love the Dell/Gold Key humour comics as a kid some lovely art inside them as you say Lew, by some (to me at least) unknown artists -

John: Harold Hare was the first comic I remember getting and enjoying so he was probably (along with Noddy) responsible for my love of comics.

I never bought any Gold Key humour titles, but I did have Zorro, The Green Hornet and Boris Karloff. The one Gold Key I wish I'd spotted was Beneath the POTA.
( think I'll have a peek on EBay. I did find a full set(5) of the 2001/2 UK Titan POTA's there for only a fiver! )

I know some Flintstones strips that were meant to be English created and.. have some weird things (the normal of sticking a lot of English terms In a US setting, Pebbles, who is a toddler at most, acting like a 10 year old...) and that style looks very much the same as the one shown there but again, possible for being Gold Key.. but I think they might be the UK ones

Ripley's Believe It Or Not and Star Trek were the only Gold Key comics I bought on a semi-regular basis. I had the UK reprint of Tarzan fairly often though.

As for Harold Hare, I never saw a copy as a child. I didn't really bother with 'nursery comics' (as they were called then). I had one issue of Yogi Bear's Own, and a couple of Huckleberry Hounds (not the ones shown here, which I bought a few years ago) and a handful of Bimbo, TV Toyland and Candy comics. That's about it. I always preferred The Dandy etc.

Hiya Paul, that is a coincidence, especially as the very first books I ever remember getting were some little square Noddy books!
My Mother had first bought me Playhours and Jack & Jill's and, as my favourite strips were Tiger Tim & the Bruin Boys and Topsy-Turvy Harold Hare, when he got his own comic she tried me with it and that was the one I chose every week. Do you remember Toad of Toad Hall, Moonie and Torchy the Battery Boy?
If you search HH in Peter Gray's blog search box, somewhere in there you'll find a post about him.
Catch you later, mate.

I remember Huckleberry Hound, Pixie & Dixie and Quickdraw McGraw as they were all cartoons on TV....but Harold Hare and Snooper & Blabber ??

There's info if you Google it, Colin. Snooper and Blabber were Hanna-Barbera characters on the Quick Draw McGraw show but Harold Hare was an originated comics character.

Hiya Col, yeah, Harold Hare wasn't a Hanna-Barbera character, but a strip in Jack&Jill nursery comic, who proved so popular they gave him his own paper. Because it featured Gerry Anderson's Torchy, you can also see examples of it on Shaqui's" Technodelic" website.
Catch you later,too, mate.