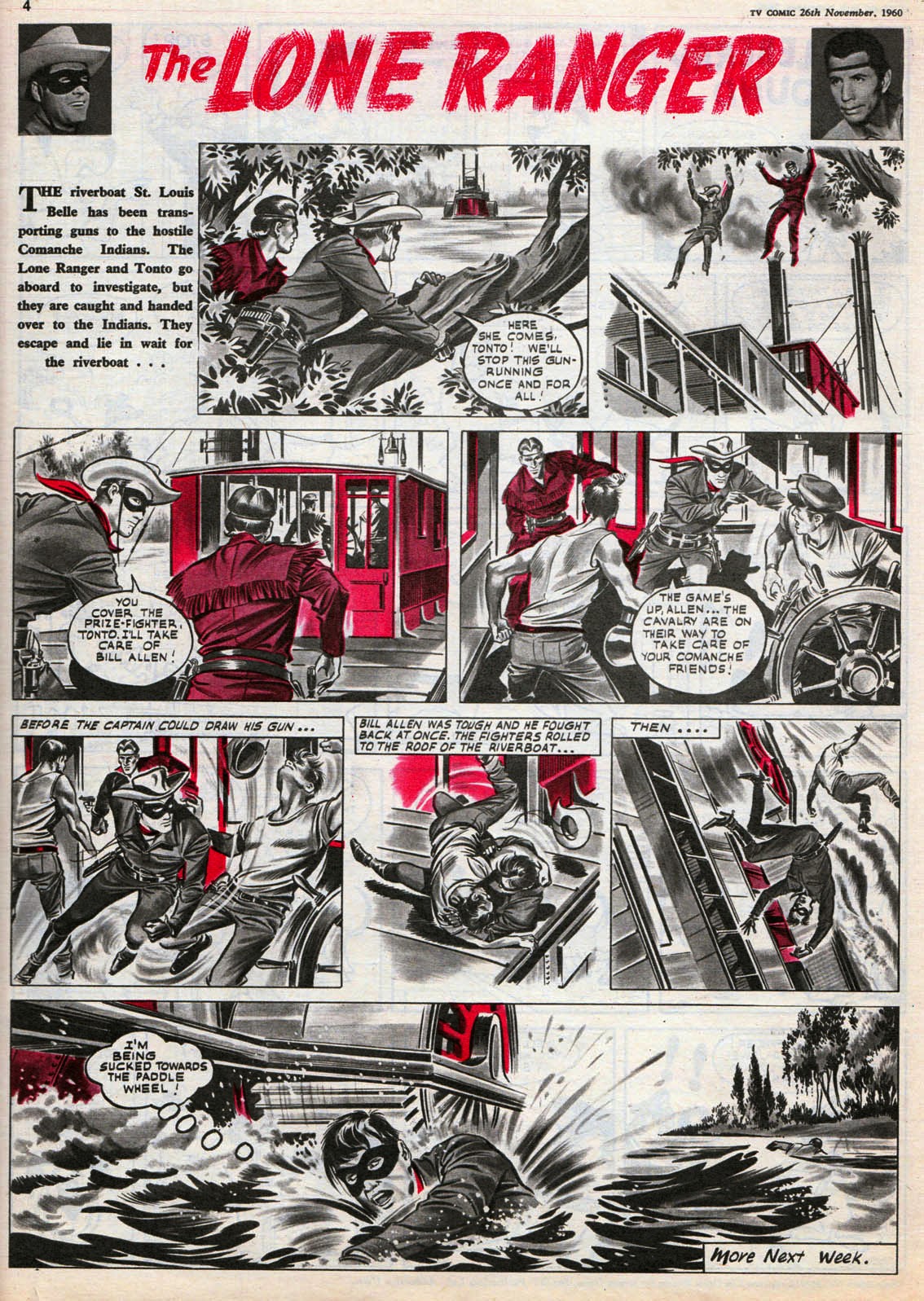 Before his long run illustrating Fireball XL5 and Zero X (plus a few Captain Scarlet stories) for TV21, Mike Noble was a regular artist in TV Comic from 1960 to 1965. Westerns were still very popular at the time and Mike illustrated The Lone Ranger in 1960/61. (Mike had also previously drawn the strip for Express Weekly in 1958 to 1960.) The above example is from TV Comic No.467, dated 26th November 1960.

After The Lone Ranger, Mike was commissioned to draw a similar strip, The Range Rider from 1961 to 1964. This example is from TV Comic No.579 (19th January 1963). It looks as though Mike was experimenting with a different inking technique on this one, with bolder outlines on the characters... 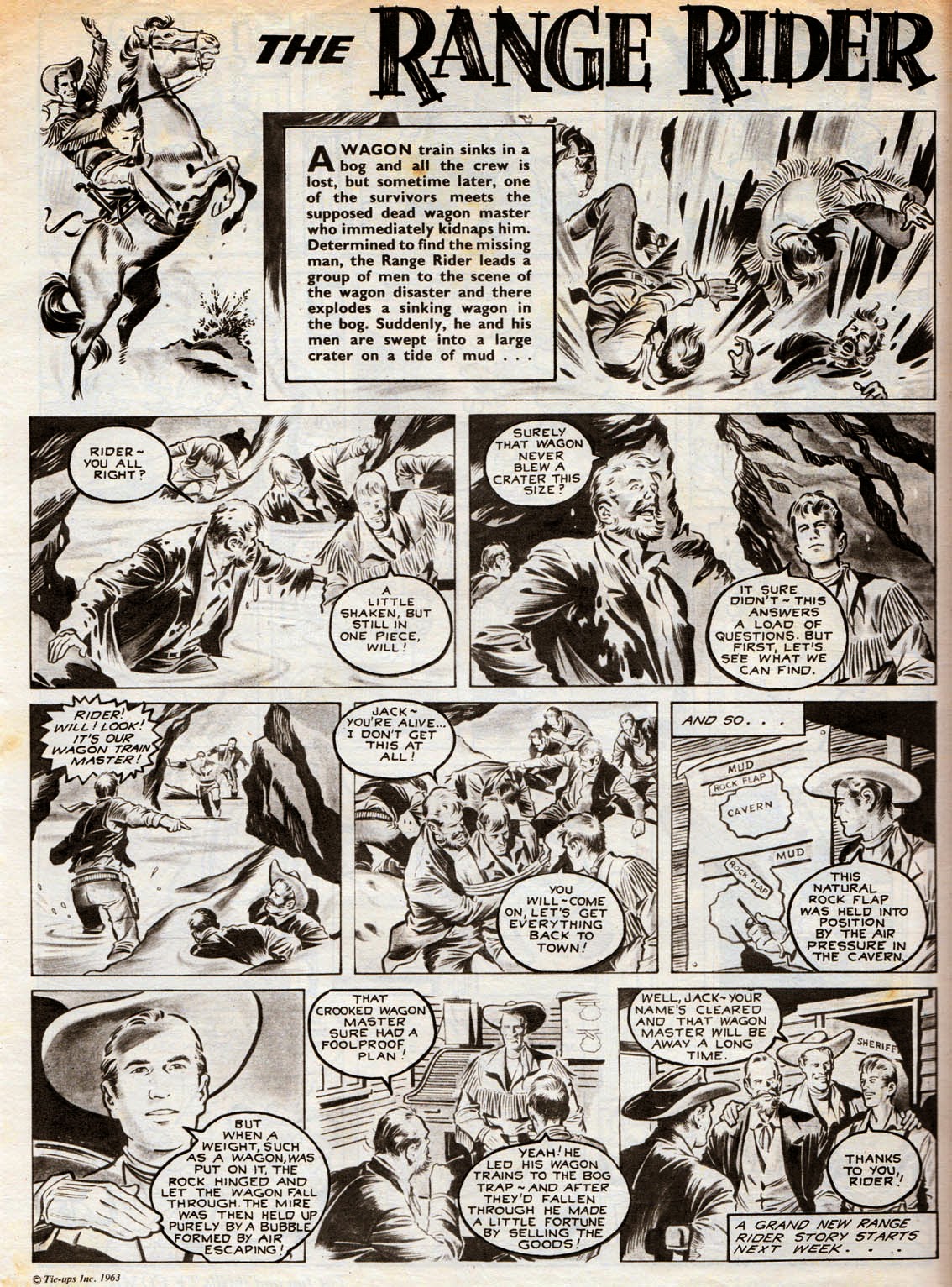 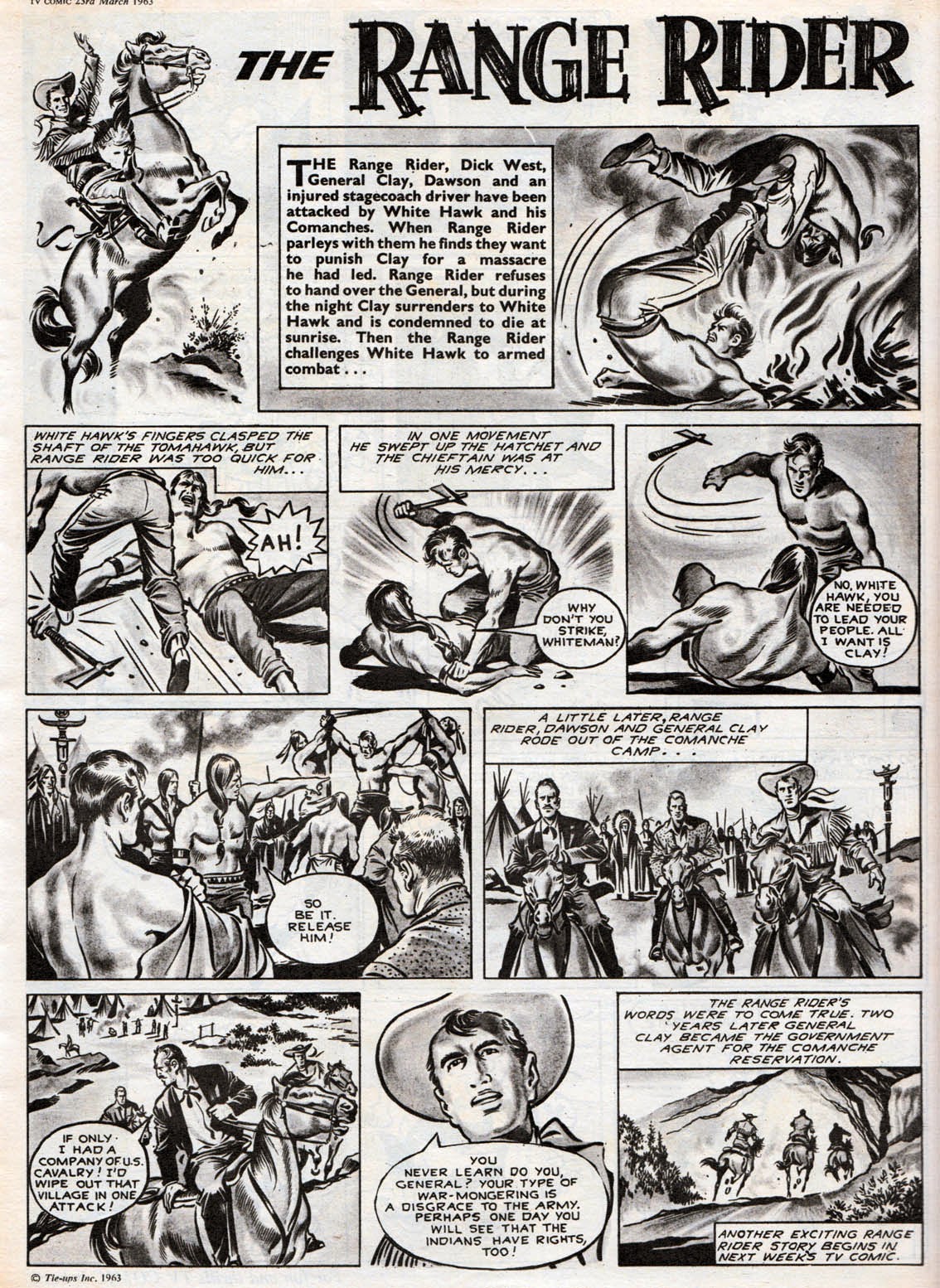 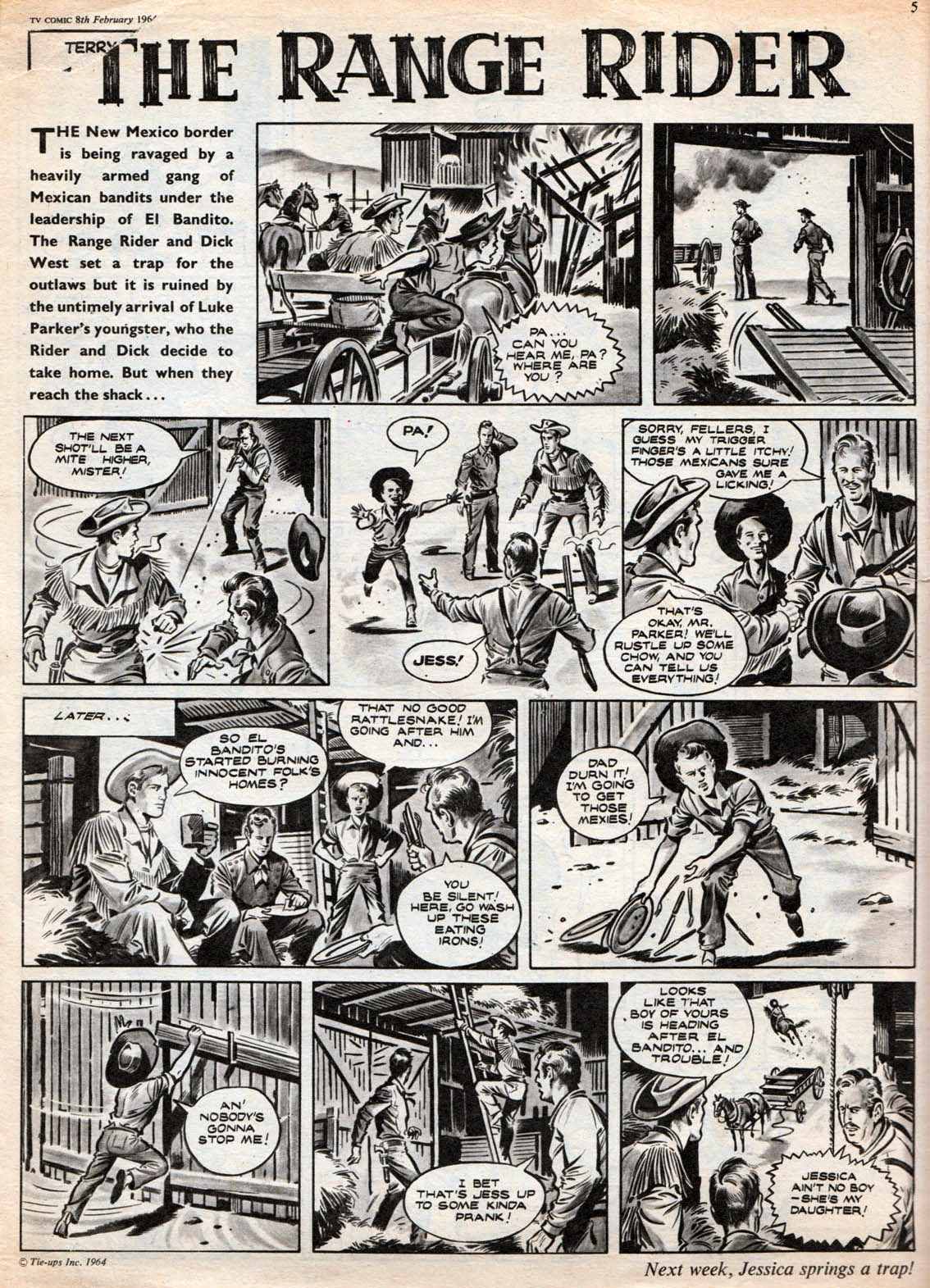 Personally I prefer his TV21 strips, full of explosive action, marvelously coloured, but it's interesting to see that Mike's early work also had his identifiable dynamism and excellent figure work. Definitely one of the greats, and, as always, my favourite UK adventure strip artist. 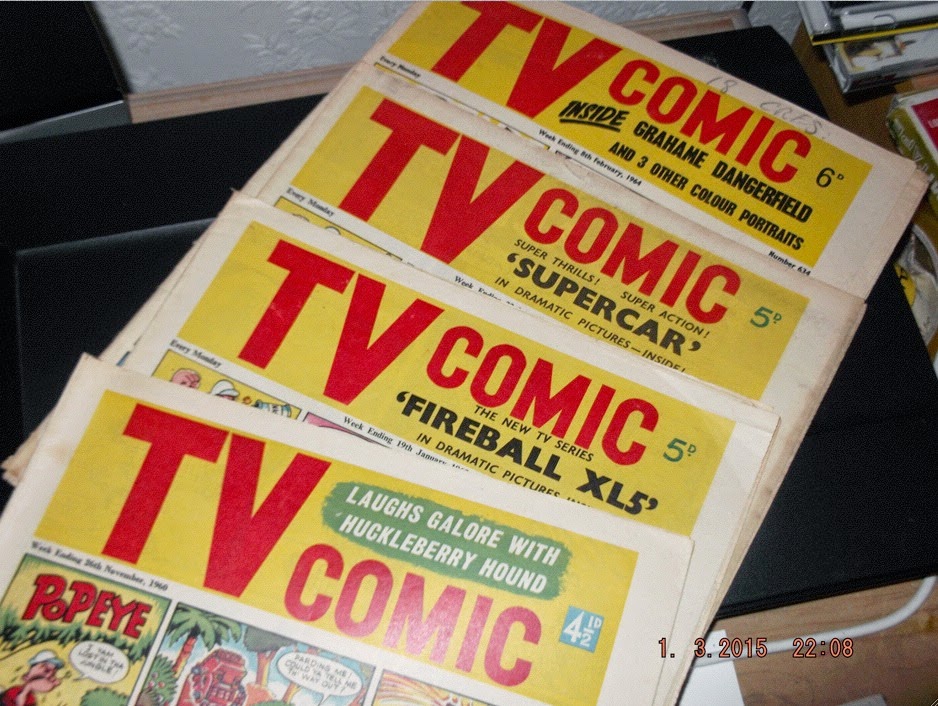 Very interesting to see those, and I agree with your comments. Reminds me of something he said to me about those spot colours - they were applied as those colours on the artwork - I always assumed they were applied afterwards or in black on an overlay. So if they were green, he applied a green wash over the halftone artwork.

Really? What an unusual technique. Or perhaps that's how other comics did it then too. I don't think the spot colour really added any benefits to the strip but it's interesting to hear it was done that way. Thanks for commenting, Lee.

Interesting to see how he developed so quickly. By 1964 he was very near his TV21 style. But 55 years ago he was pretty good! I, on the other hand, had a lot to learn! I remember TV Comic from 1964, I confused it with WHAM! once or twice (both white paper and photogravure) but the Telegoons in TV Comic always made it worth reading!

TV Comic was never a first choice for me but still well worth buying of course. It was 1969 before I had it regularly.

Thanks Lew. Like you, I'm a huge fan of his work but I've never seen anything he did outwith TV21 and Look-In.

He did a bit for IPC around 1970 too. I've shown some on earlier blog posts but perhaps I should post a few more examples.

Ahh, TV Comic - the comic for transvestites everywhere...
It was, actually, the first comic I did get regularly, when they ran those gorgeous colour Dr Who strips on the cover. Btw, Dick Millington's widow has been in touch with the CM about maybe donating some artwork. It'd be nice to get some Mighty Moth.

That'd be excellent. I'll try and drop by the museum one of these days!

I am trying to locate a comic which i hd when i was 8 or 9.- probably the first
comic i owned - it had a lone Ranger strip (i remember the river boat story
as illustrated above ). So it must have been a TV COMIC issue from oct or nov 1960. It may have had a Huckleberry hound page and the end cover had a sci fiction story in color about a spaceship crash landing in a strange world. I cant recollect the cover or the comic's name but in all probability it must hv been a TV Comic issue.

I hv succeeded in collecting some dell, dc, eagle and other comics from the early 60s but TV Comic has eluded me. I would love to see a pic of the last page of the sci fi story because it is etched in my memory along with the lone ranger illustration by Mr Mike Noble.
Joga

It doesn't ring any bells with me, Joga, but hopefully someone else reading this might be able to help.