2000AD - still brilliant after all these years 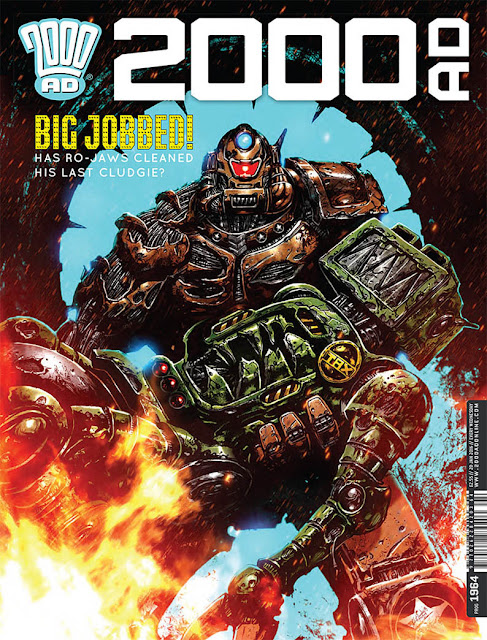 Here's Clint Langley's dramatic cover for 2000AD Prog 1964, on sale Wednesday 20th January. There's a rose-tinted myth amongst some comic collectors that the artwork in today's comics is inferior compared to comics of years ago. This is of course easily disproved, and 2000AD is one of the comics that disproves it. There's an incredibly high standard of artwork in the comic week in, week out. This very issue features fantastic work by Mark Sexton, Richard Elson, John Burns, Carlos Ezquerra, and the aforementioned Clint Langley. All of it easily on a par with the great comic artists of the past. Indeed, it even features work by two of those greats, with John Burns and Carlos Ezquerra still firing on all cylinders. And let's not forget the script writers of this issue too of course; Michael Carroll, Dan Abnett, Pat Mills, Kek-W, and John Wagner.

Don't just take my word for it. Have a look at the preview pages over at the Forbidden Planet International Blog:
http://www.forbiddenplanet.co.uk/blog/2016/the-weekly-2000ad-preview-prog-1964/

2000AD isn't the only place you'll find top contemporary comics work of course. There's some excellent stuff out there and I'll continue to promote more on my blog soon. Whether in newsagents, bookshops, comic shops, or online, British comics are still brilliant! Don't listen to the misery merchants. Check out the comics scene for yourselves!
Posted by Lew Stringer at 22:42

Try and find 2000 Ad in a newsagents nowadays. They don't stock it any more so unless you're lucky enough to live in a city where there's a comic shop you simply cannot get it!

I'm sorry David, but you're mistaken. There are at least five newsagents in my town that stock 2000AD on a regular basis. That may not be the case in every newsagent but it is definitely available. If your local shops don't sock it, ask them to order it for you.

I have yet to see a newsagent that DOESN'T stock it! In Belfast we've very little in the way of newsagents but 2000AD is there in them all, as it is in supermarkets too. Plus it can be ordered online, so people are always able to get it.

You can subscribe and get it delivered to your door (cheaper as well), get it ordered by your newsagent (what I do as it supports local services) or get it delivered digitally. My newsagent now stocks it too, because I have ordered it.

Personally I think the art is way more varied now and some of it is just brilliant. Being varied there is some that won't be popular, but it's an anthology and that's how it should be.

The writing is vastly improved over old issues, the only negative I would say is that it sometimes is all "dark". Personally I look forward to the Megazine more than the prog now, but it really depends on the story mix.

I can only really speak about Marvel but I'd agree there's plenty of excellent art in today's comics. My only gripe is that there are a lot of rather dull covers but there are some absolutely stunning ones too - and that's a great 2000AD cover also.

I have recently got back into 2000ad (the new Bad Company tempted me!) but the only place I can find it is WHSmith. I am thinking of subscribing but how are the progs actually packaged? I remember subing years ago and my posty just to just fold it over to fit through the letterbox.

Sam - The subscription Progs used to come in a plain white envelope but are now sent out in a plastic bag along with a white sheet of paper that also serves as an address sheet. The Megazine and its bagged reprint are mailed in a similar style.

Yeah, it looks like incredibly flimsy packaging but in the ten years I've been subscribing I've never really had a problem with the condition. Two issues got a bit damp during the 2007 floods (I live in York where it does get a bit wet from time to time) but that was extreme weather - and these days the plastic bag would have probably protected them against that.

Postmen enthusiastically trussing up your mail with rubber bands can be an occasional problem - but nothing that a couple of hours under a stack of Marvel Masterworks wont flatten out.

Due to work commitments I'm an irregular reader who catches up every few months - so I'd tend to miss issues if I was picking up from the newsagent or LCS. By subscribing I know I've got an uninterrupted run waiting when I finally get the time to sit down with Tharg and the rest of the gang. I'm a big supporter of digital comics for similar reasons - but in the case of 2000AD I've resisted the urge to go virtual.