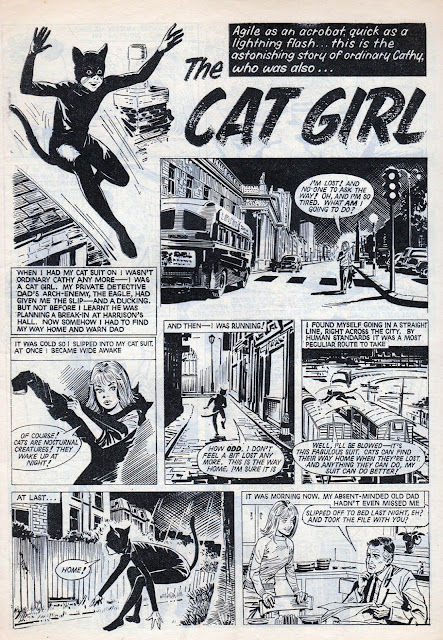 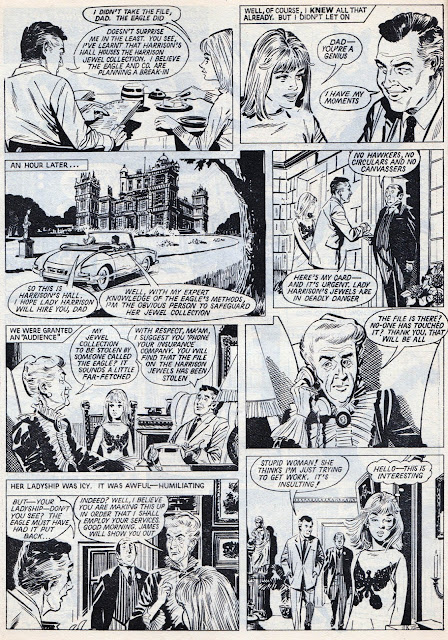 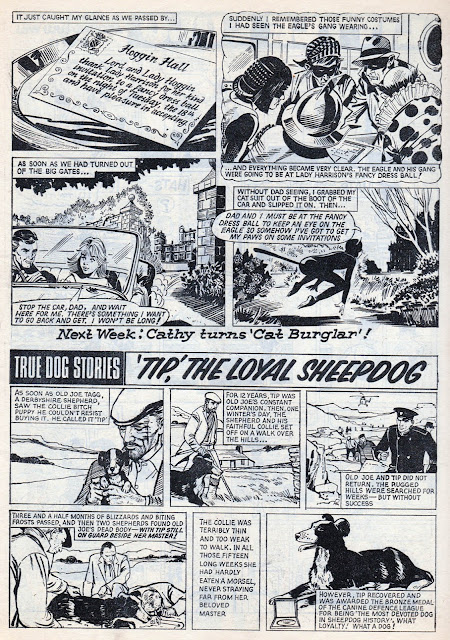 Five years before Billy Farmer became The Leopard from Lime Street in Buster, "ordinary Cathy" fought crime as The Cat Girl in IPC's new girls' weekly Sally. The strip debuted in the first issue in 1969, and the example shown here is from Sally No.4, dated 5th July 1969.

Unlike Billy Farmer who was scratched by a radioactive leopard, Cathy's powers were derived from a non-violent source; a magical costume. When wearing the cat costume, Cathy became "agile as an acrobat, quick as a lightning flash".

Does anyone know who the writer and artist were of The Cat Girl? Let me know in the comments below if so. In the meantime, I hope you all enjoy this look back at a forgotten British superhero! 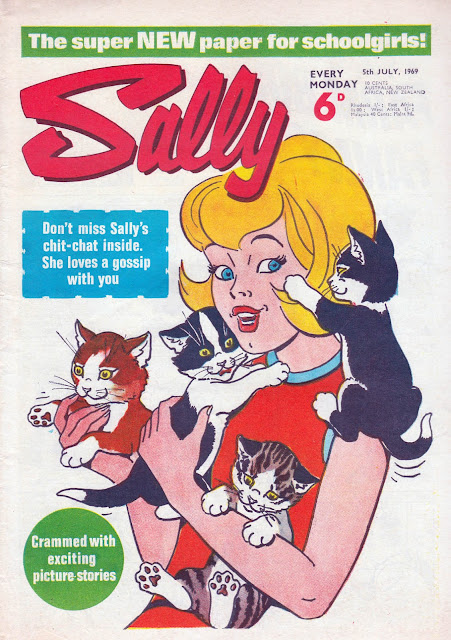 Email ThisBlogThis!Share to TwitterShare to FacebookShare to Pinterest
Labels: Sally

I remember something about this... but can't remember what that is.. i'll see if I can find anything..

Ah, got it..
Cat girl, appeared in Sally, and later Tammy. Also reprinted in Spainish and Dutch, Artist/creator seams to be Giorgio Giorgetti who did a number of adventure strips for IPC around the time. He was known for putting his name in some panels of a strip he did so i'm looking to confirm if he did in this one..

I'm pretty sure Cat Girl was drawn throughout her run by Giorgio Giorgetti Lew.

Can't help with the writer but the Cat Girl artist was Giorgio Giorgetti.

Giorgio Giorgetti it must be then. Thanks everyone!

Also,... I *think* Sally was the very first new IPC comic, after the company had absorbed Odhams and Fleetway. Unless we count the revamped Smash! as a new comic.

Since Catgirl first appeared in 1969, the rights likely belong to Time Warner - unfortunately as it would make a great "companion" volume to 'The Leopard from Lime Street'.
I wonder if the later reprint in Tammy might give Rebellion some claim on it?

Thanks for posting this gem Lew - you've probably just raised the back issue price of Sally now though!

Looks like a series I shall be searching out...who are the rights holders now? Anybody know?

The rights to IPC comics from 1969 seem complicated. Rebellion own Whizzer and Chips (launched October 1969) but apparently Time Inc. own Sally (launched June 1969). Or do they? Who knows for sure?

It would have made things a LOT easier back when Egmont and IPC divided the rights if they'd chosen January 1969 as the start date, not 1970.

Time's subsidiary DC Comics will probably never use the British material, so it would solve the problem completely if they sold their half of the IPC archive to Rebellion as well.

As for Whizzer and Chips, wasn't it still running when the split happened? I assume that'd be when the IPC comics division was sold to Robert Maxwell, so 1987 (Maxwell sold it on to Egmont in 1991). That's the reason it's on the Rebellion side of the divide, whereas June isn't.

The story of "Tip the Loyal Sheepdog" is confirmed by a risky bootleg copy online of "A Visitor Guide to Bradfield and District" as happening in 1953-54. But in the situation you'd rather have "Samsung the Useful Mobile Phone". Even the one that goes on fire; think about it.

I asked the 2000ad Twitter account a while back and they seem to be under the impression that Sally is amongst the stuff they own, so that's nice.

The whole 1969 hinterland is all very weird. I did vaguely wonder if the original intent was for the split simply to be when the consolidated IPC Magazines took over from Odhams, Fleetway, et al, as otherwise the cut off seems pretty arbitrary. Some post-relaunch Smash characters made named appearances in Albion though, even if that was the initial idea, it doesn't seem to have turned out that way.

Smash is owned by Time Inc. unfortunately. Yes, the division of spoils as it were should really have been early 1969 to make things easier. Seems to me they just chose 1970 because it was the start of a new decade, without thinking it through.

That said, though, rights are a controversial topic in UK comics. Do Time Inc really hold the rights to comics from the late 19th / early 20th Century for example? Or even the Odhams material? Were contracts signed by creators? If so, where are they?

I am Riccardo Giorgetti..... the son of the artist GIORGIO GIORGETTI (1920-1982) who was the creator/artist of Catgirl. I was left some of his original Catgirl work..given to me by the then CEO of IPC following his death.

My dad was Italian, but moved to England in 1950. He had his art studio at his home here in Margate, Kent.

Hopefully the above info helps...
My email address is riccardogiorgetti454@btinternet.com if anyone would like further info!

Thanks for getting in touch, Riccardo! That's very interesting. I'm glad to hear that you have some of your father's artwork for Cat Girl. So many of those old IPC pages were destroyed or sold off, so it's good to know those Cat Girl pages are with someone who deserves them.