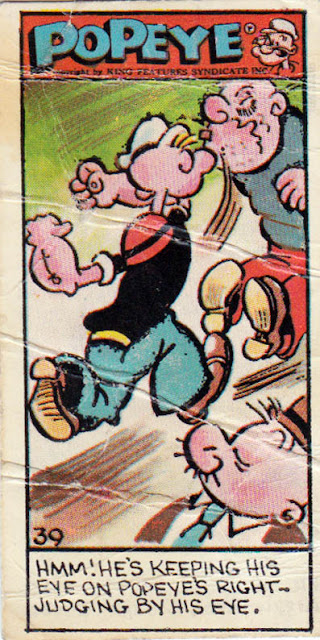 Just for a change of topic, let's look at something different, but kind of related to comics. "Sweet Cigarettes" were a very popular treat when I was a kid and there were numerous brands associated with them. Today you'd know them better as "Candy Sticks" but back in the 1960s they had a dob of red colouring on one end to give the illusion of a lit cigarette.

They became "Candy Sticks" later because it was deemed inappropriate for little kids to mimic smokers. Although they never inspired me to start smoking, they did encourage a sweet tooth! 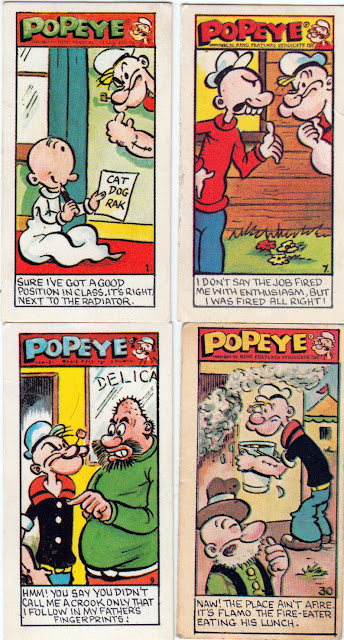 There were loads of characters who had their own Sweet Cigarette packets; Doctor Who, Thunderbirds, Huckleberry Hound, and many more. Each packet had a free full colour card inside, encouraging kids to collect the set of 50 or thereabouts. This was, as you may know, a junior version of the cards given with packs of real cigarettes in the early to mid-20th Century.

The examples I'm showing here today are from the Popeye sets produced by Primrose Confectionary of Slough. I think there were four sets in all, but I only have the few shown here. (I doubt anyone ate their way through over 200 packs to get every card!) They originated from the early 1960s but they must have been reprinted as I had these in the late '60s. 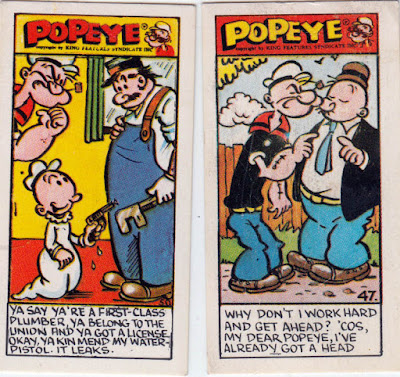 As for their relevance to comics, I believe that some Popeye cards (if not all) were drawn by Denis Gifford. That certainly looks like his lettering, and he could mimic the style well enough to do a convincing Popeye. If anyone knows for sure, please let me know. 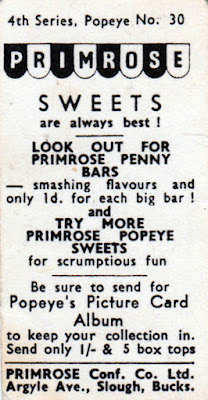 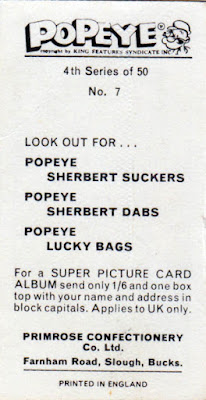 Sweet cigarettes never encouraged me to smoke either - by the same logic wine gums should have been banned to stop us all boozing :)

I also liked the chocolate "Smoker's Set" that I had most Christmases; chocolate box of matches, a pipe, a lighter, and a few chocolate cigarettes (wrapped in cigarette paper), on a cardboard ashtray.

Smoking was such an accepted thing back then. Loads of characters on TV smoked too (some even on game shows!). My dad was a heavy smoker but it didn't incite me to smoke (apart from a couple of cigars I had one Christmas when I was 18 and out with my mates). The fact that smoking was a factor in my dead's early death might have had something to do with it too, but even then I doubt I'd have started. Who wants to stink of cigarettes?

You might be right about Gifford ! Since long ago I wondered who might be the artist of those cards, for a while I thought it was Zaboly because it's the only product where the characters he created were sometimes used, but a friend who knows much about Popeye told me it wasn't him. Now I feel dumb to have not seen that the address behind the cards was based in UK ! And there's certainly something of Gifford in the art style, some of the cards include animals that look like his stuff, the lettering and inking are very much Gifford as well ! Hats off to you Lew, you solved a mystery it seems

Thank you, Roberto, although I can't take credit because I'd read somewhere years ago that it was Denis' work. (Can't remember where.)

Yes, Peter, the transfers / tattoos aren't as good unfortunately. The old style cards seem to have died out. Even things like Star Wars and football tend to have stickers now, not cards with info on the back. A shame.

Hi Lew. I've just by chance come across a large hardback book in the Cartoon Museum library called 'Popeye', edited by Mike Higgs and published by Hawk Books in 1995. It includes an essay from Denis Gifford about Popeye's appearance in comic books in the US and the UK. He talks about L Miller and Sons beginning to reprint the King Features daily strips in 1959 as monthly comic books, put together by Mick Anglo "whose main job was to provide the covers. For many of these he used artwork by the author of this chapter, originally drawn for several sets of fifty cartoon cards which were issued with the Primrose Company's Popeye sweet cigarettes a few years earlier! Still as most of my Popeye poses were lifted from the original American strips, I don't suppose there would be much point in taking the matter to Court!"

That seems to confirm the matter nicely. One set of fifty cards is reproduced - not including any of the ones you show here. It's a great book, including lots of lovely Segar strips as well as other artists such as Bud Sagandorf and Bobby London.

Thanks, Richard! I thought I'd seen info somewhere about Denis drawing those cards. I have that book but didn't think of looking there. Thanks again! I'll update my post.