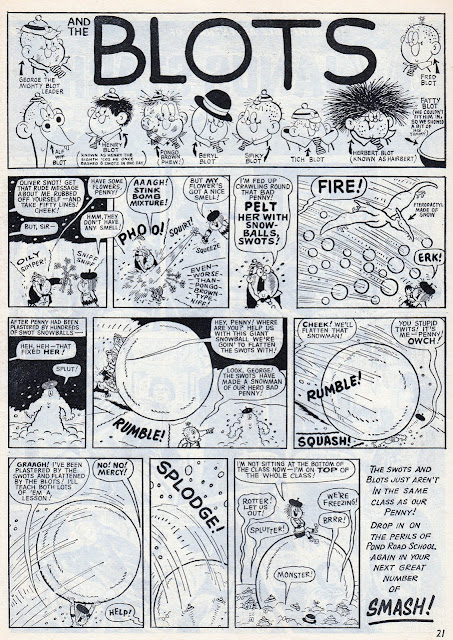 Some people think that Leo Baxendale drew The Swots and the Blots from the very beginning in Smash!, but that's not so. The series that ran in the comic from the first issue in 1966 to the last Odhams issue in early 1969 were mainly drawn by Ron Spencer and Mike Lacey, two artists imitating Leo's style. (Nigel Parkinson reminded me that Leo did draw one episode before then. See the footnote in this post.) Leo took over the strip when Smash! was revamped by IPC in March 1969. In doing so, he completely re-energised the strip, making the characters more distinctive. It had always been an enjoyable strip but Leo made it even funnier!

Here's a handful of examples of Leo's Swots and Blots from Smash! in 1969. 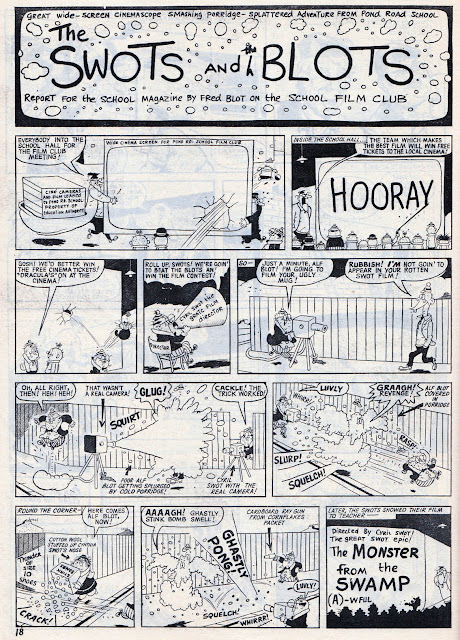 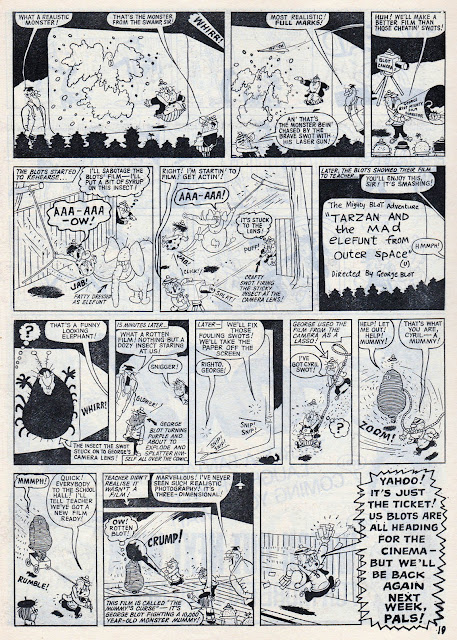 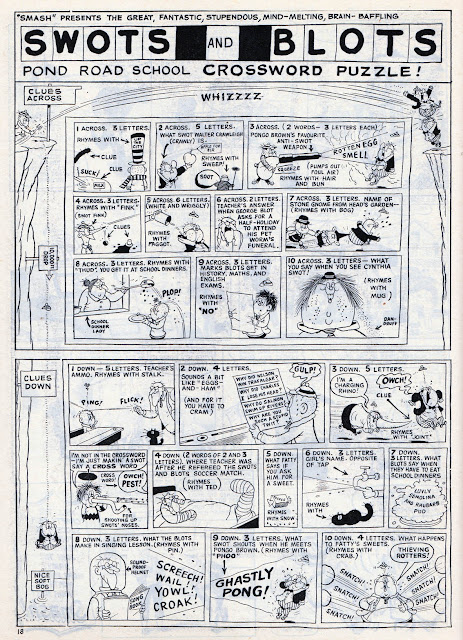 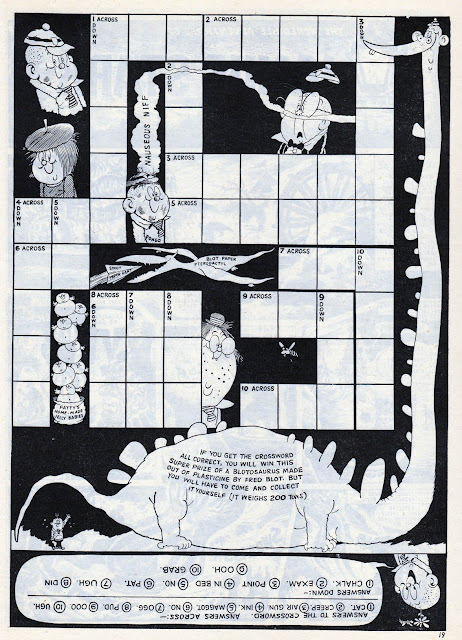 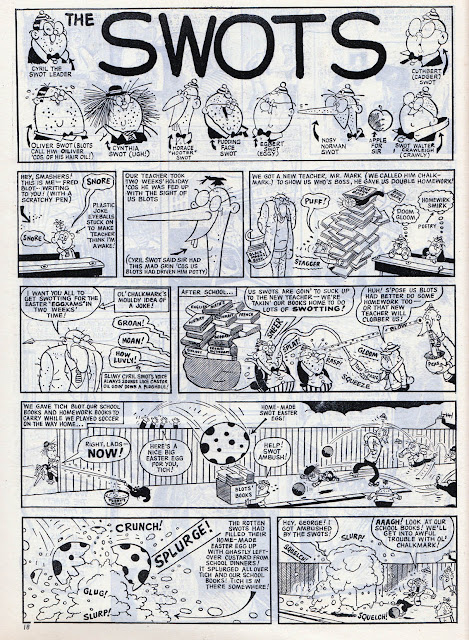 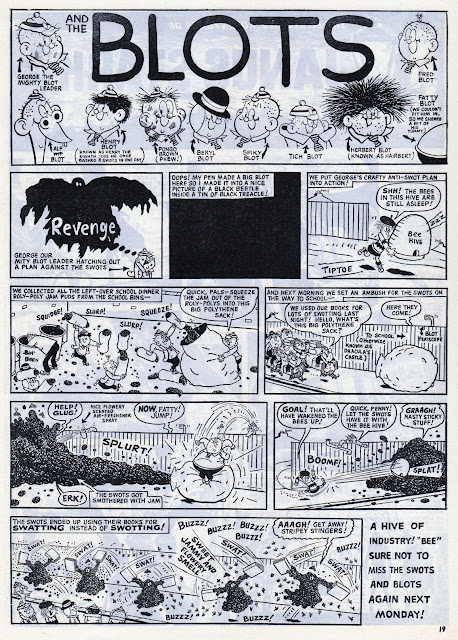 Leo wrote and drew the majority of The Swots and the Blots strips in the IPC Smash! (although some were fill-ins by Les Barton and Terry Bave) and it proved popular enough to transfer to Valiant and Smash! in 1971 when the two comics merged. Even today, it's still one of the funniest strips to have appeared in a British comic!

UPDATE: As Nigel Parkinson reminded me, Leo did do one Swots and Blots before the comic was revamped. Here it is, from Smash! No.159, dated 15th Feb 1969... 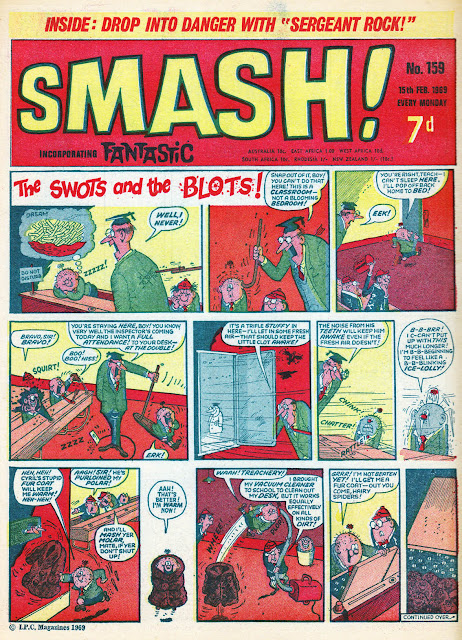 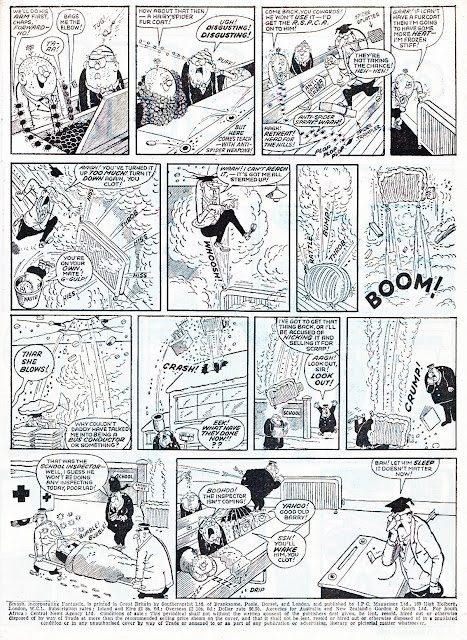 Interestingly enough, Leo did draw ONE Swots and Blots before his 'IPC Smash!' run began, a few weeks earlier, which might have passed unnoticed in 1969 except when I went into the school yard saying "Isn't it great! Baxendale is back!" to the nonplussed stares of my classmates!

You're right, Nigel. I'd forgotten about that one. I'll add it to my post later.

I only knew one other schoolmate who read Smash! (or the other Power Comics, thinking about it). The Brotherhood of Power was very select.

Still one of my favourite humour strips of all time along with Ken Reid’s “Frankie Stein” - Just a pity this isn't part of the Rebellion back catalogue, what a great collection that would be.

Great to see these Lew, as this is the first timeI have seen 2 of these strips :)

I'll show a few more at some point, Paul.

A Swots and Blots collection was being planned by an indie publisher a few years ago but negotiations couldn't be resolved so it never happened. Maybe one day.

I've always been a big fan of Leo's. Thanks for sharing this.

Just bought the leo baxendale book a very funny business. Although it's a great book I was slightly disappointed that there were no strips from wham or smash included.

I don't have my copy to hand at present but isn't there a Ken Reid Frankie Stein page in there from Wham?

Quite right but I was really referring to leo baxendale strips

When the comic changed in March 69 I was so sad `The Cloak` was one of the dropped stories (Though I was just discovering `Sparky` comics "I. Spy" then) I stuck with the comic and quite enjoyed it. Then came "Great News Pals" which utterly floored me-as I knew it meant the comic was going down the plughole! Merged with the (To me) awful `Valiant` I stuck it for a few V& S issues- but the sight of `Captain Hurricane` was too much. Smash- another underrated comic in my opinion.