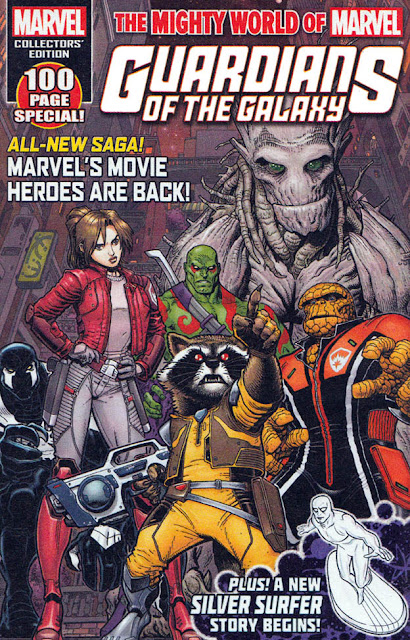 Next month, Panini's Marvel Collectors' Editions receive a bit of a facelift with a new trade dress. The distinctive red corner boxes will be replaced with a black one, but the Marvel logo will be more noticeable.

More drastic will be the change to the masthead of The Mighty World of Marvel, with the Guardians of the Galaxy logo being prominent for the return of the strip to the comic. This makes sense, as there's a new Guardians movie coming to cinemas soon so it's important to catch the eye of new readers. (I've often thought that Marvel Legends could do likewise, making Thor, Iron Man and Captain America's names part of the masthead.)

Sadly, it looks like the issue number, date, and price won't be part of the new corner box so presumably they'll be near the bar code instead. A bit inconvenient for buyers glancing quickly for such info.

The Mighty World of Marvel No.7 featuring Guardians of the Galaxy goes on sale 6th April, and also includes The Silver Surfer and Doctor Strange.

Until then, grab a copy of MWOM NO.6, featuring Doctor Strange and the conclusions of the current story arcs for Black Widow and Ms.Marvel. On sale now!
http://www.paninicomics.co.uk/ 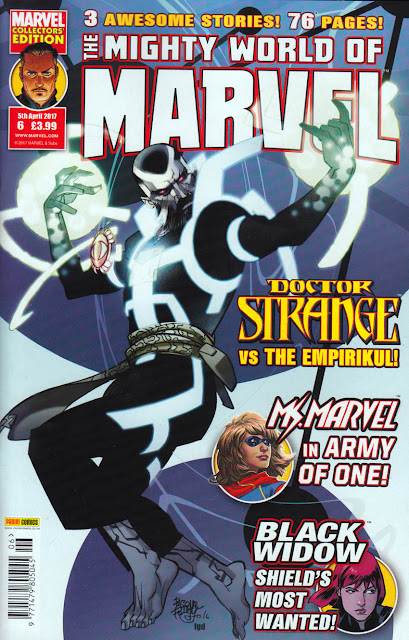 Reminds me of when Marvel Heroes Reborn visually relaunched some 15 years ago. It had previously had a "ketchup blob" - as it had been termed in the letters page with the logos of Hulk, The FF and Iron Man all taking equal billing. However this changed when MHR dumped The Hulk (who was never too popular in the titles letters page) and replaced it with the Avengers. This coincided with Panini implementing the current Marvel Collector's Edition logo we've had ever since (bar the Marvel Now years), give or take a couple of tweaks - and also the ditching of UK drawn covers sadly.

The rambling point I'm trying to get to is that the MHR logo was reduced slightly and whoever was the cover star that month got their logo prominently on the cover, the rest in normal type face. Maybe I'm reading too much into things but perhaps the reason why they never properly tried this with new MWOM is that MHR got cancelled four issues after the new relaunch, being replaced with Avengers United a few months later.

Sorry pressed enter too soon, damn phone! I was saying MWOM had the logos quite prominent on the launch as a collectors edition but always Daredevil and hulk. Will be interesting to see if Marvel Legends takes the same prompt as you suggest Lew. I think it might.

Some say it confuses retailers and readers as to what the comic is called if they reduce the logo like that but I would hope they'd have more intelligence than that. After all, it never hurt Tales to Astonish, Tales of Suspense, Amazing Adventures and many other US comics that used this method. Time will tell, but I hope it works.

It's like the MWOM masthead in the '70s which had the Hulk's name featured much more prominently (and all the comics that MWOM merged with). That didn't confuse anybody - we all knew the comic was called Mighty World Of Marvel.

It's not permanent, Lew. It's just while the Guardians are in the comic. The old logo will be back in the summer.

Any chance you could reveal how you know that please, Anon?

That anon is obviously lying. The Guardians will be there for at least a full story arc, which looking at the Marvel Wikia would be the first five issues... the earliest they'd be replaced is September - i.e. autumn.

Well, anon is talking about the logo, not the content, James, so personally I'd hold fire before calling anyone a liar.

I really liked the current run, and so it's disappointing to see it shaken up so much, but that's the way of anthologies. I enjoyed the diversity in the comic (two out of three strips having women as leads!), but we're now heading back to standard blokefest, it seems.

Odd also that people are so down on the Doctor Strange art, judging by the letters. I thought it was great.

Both Black Widow and Ms.Marvel will be back apparently. Panini's MWOM likes to shake up the content every now and then, which gives readers a chance to see highlights from other series.