More about Marney the Fox... The news that was announced the other day (see here) that Rebellion are to publish one book every month reprinting classic comic strips has been warmly welcomed by UK comic fans. However, although everyone is eager to see it, Marney the Fox appears to be the one that's an unknown strip to some.

Just to cover the basics; Marney the Fox appeared in Buster weekly from the issue dated 22nd June 1974 to 11th September 1976. This fictional story of a wandering fox cub was written by Scott Goodall and illustrated by John Stokes. The artwork was absolutely superb and many consider it to be amongst Stokes' best work. (The artist himself regards it as some of his best too.)

One thing that made Marney the Fox exceptional is that, unlike most other Buster adventure strips, it played up the emotional content. In that respect it was written more like a story for the girls' comics, as opposed to something like Von Hoffman's Invasion (also in Buster) that was very action orientated. It's an interesting technique to build up the emotional aspects because it enables the reader to sympathise with the character and become more involved in the story. With the technique Goodall used, the readers were privy to Marney's inner thoughts, again a style much used in girls' comics. 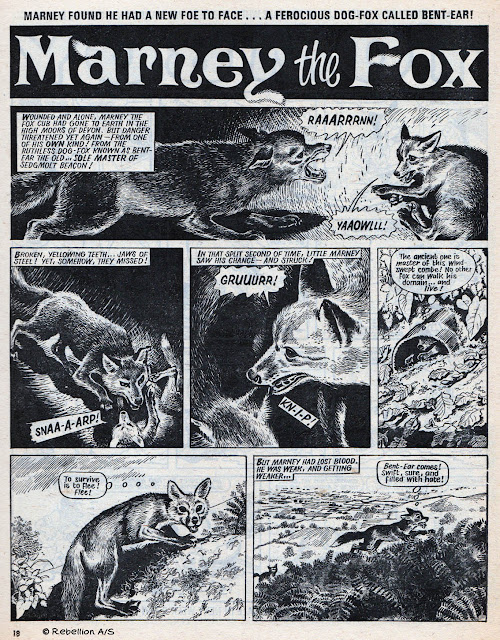 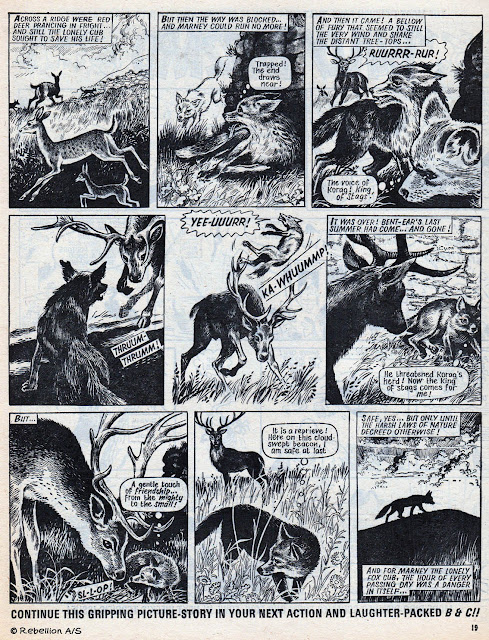 Marney the Fox must have achieved a good response from Buster's readers for it to run for two years. I'm very pleased that it's being collected in book form at last.

Looking through the issue of Buster and Cor!! that I scanned these pages from got me wondering what other strips might be suitable for reprinting. We already know that Ken Reid's Faceache is coming in December of course, but what for further in the future? (By the way, the Faceache in this particular issue wasn't by Ken Reid but was written by Dez Skinn and drawn by Keith Robson.) 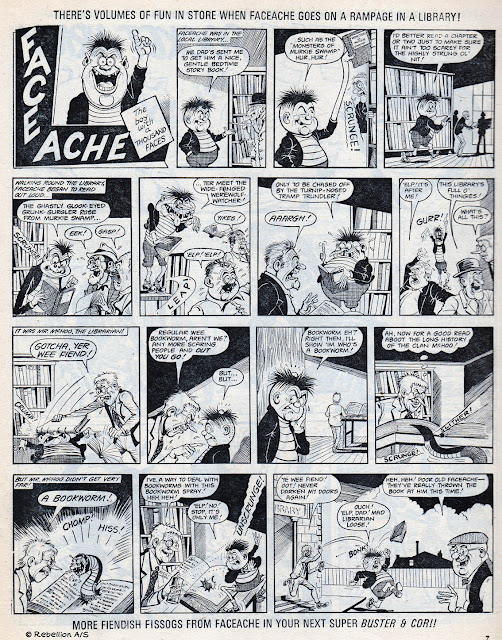 Leo Baxendale's Snooper was a funny strip, but I'm not sure if it's strong enough to carry a book on its own. It'd be good to see it as part of an anthology though... 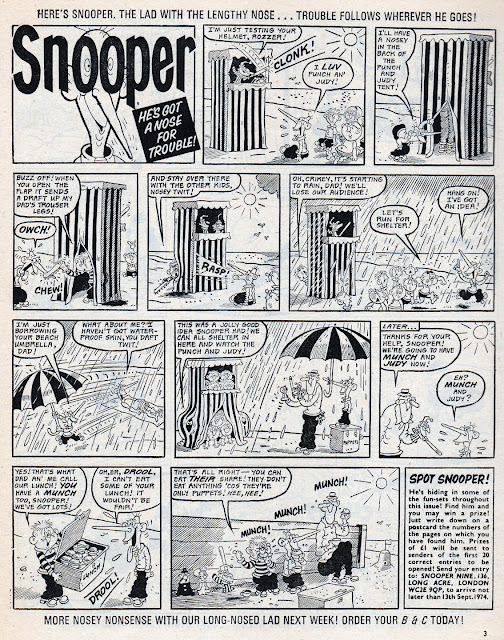 Clever Dick, also by Baxendale originally, might work as a stand alone book I think. It had a long run (1970 to 1982) so a selection of the best strips would be good. 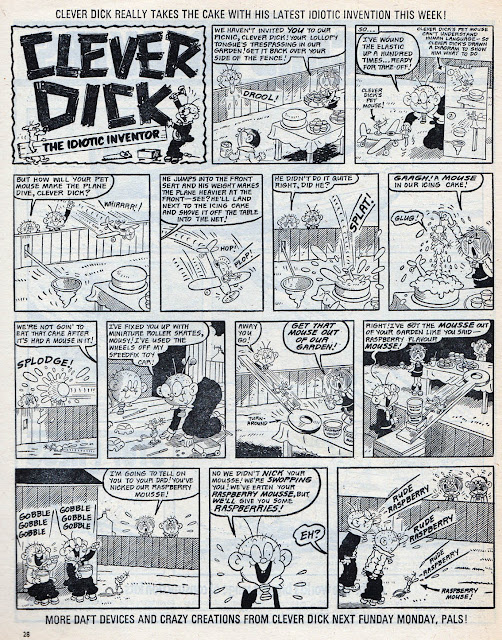 I quite like Sammy Brewster's Secret Ski-Board Squad, mainly for the artwork by Joe Colquhoun. This ran for three years (1973 to 76) so there's more than enough to fill a book. Kids on motorised skateboards might appeal to today's readers perhaps? I dunno. Objectively, I think there are a lot more strips that are likely to be reprinted before this one, but Joe Colquhoun's art is always worth revisiting. 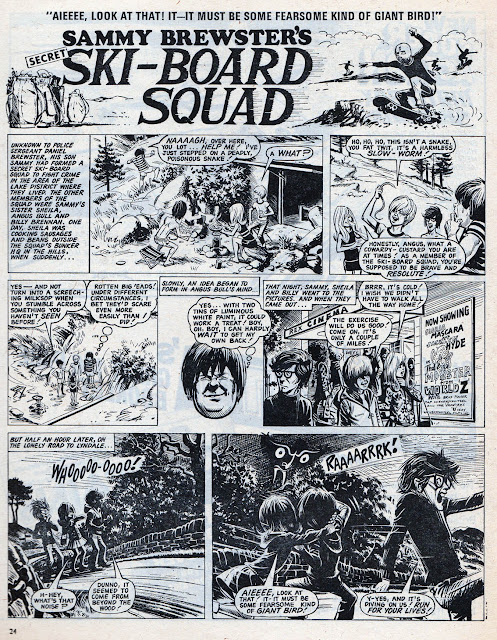 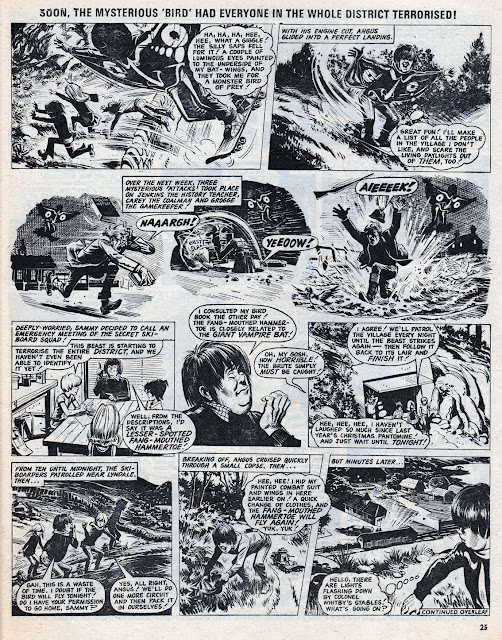 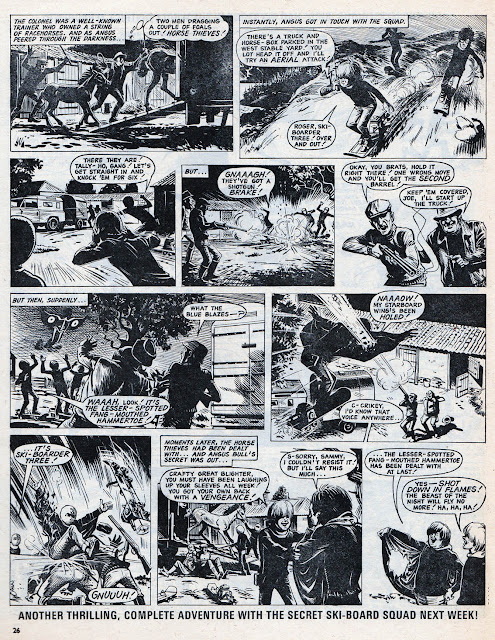 That's just speculation of course. Focusing back on this year, we have plenty to look forward to from the first launches in Rebellion's Treasury of British Comics line. One-Eyed Jack! The Leopard of Lime Street! The Dracula Files! Marney the Fox! Misty Book 2! Faceache! All well worth supporting!
Posted by Lew Stringer at 08:00

I facebooked rebellion the idea of Whoopee!! Movie Masterpiece

It was just short of a year and some nice film spoofs by Frank McDiarmid. With all the characters of Cheeky joining in the fun.

Of course Cliff Hanger or Mastermind by Jack Edward Oliver would also be great..

Yes, there's a lot to choose from. Rebellion will be looking at strips that have commercial appeal as well as being good strips. I'm sure Jack Oliver's strips would still appeal to kids today but it's not always easy to gauge these things. It'll be interesting to see developments.

Bumpkin billionnares would be the best present for my dad

Dave did a fill-in on the strip, but according to Steve Holland's Buster Index he only did one issue.

Thanks Lew, I don't suppose you know which one? Thanks

I'm afraid not, Will. The book doesn't specify and I never saw that issue of Buster.

Have to say, Marney wouldn't have been my first choice from Buster's impressive 40-year output (I'm being generous & including the largely joyless '90s, of course); all that "animal speak" got on my nerves! Galaxus would've been preferable, but I'll Marney another bash; when I call up Buster at the British Library I tend to make a beeline for Pete's Pocket Army and Faceache from this era. Speaking of the latter, I'd no idea it was coming out in December - just goes to show I haven't got my finger on the pulse of all things comicy! Best news I've heard in a long time.

As mentioned before, Rebellion only have the rights to strips that began after 1970, so it's unlikely they could reprint Galaxus.

Presumably Rebellion also own the beautiful, full-colour Marney series from the 1980s. I wonder if they even know it exists?

Good point, Phil. I'll mention it to them.

Marney the Fox appears to think with mixed lower-case lettering. Rare for all sorts of reasons. (Such as finding a professional artist who can do it??? :-)

A lot later, the American Marvel Comics set up an alternative "Ultimate Universe" where
the characters talk with mixed case. And a while later than that, they had those characters jumping between universes and retaining their speech style. That particular setting is gone, but I think currently they use mixed case in titles for younger readers, that tend to be - without particular explanation - the likewise alternate versions seen in television cartoons.

Any professional letterer should be able to do lower case lettering just as well as upper case. Even easier these days now most use computer fonts.

I think the reason that Marvel started using lower case might be the same reason The Dandy did it for a while; the claim was that children found it easier to read than everything being in upper case. I was never really convinced by that and was glad to see the practice dropped after a while. After all; several generations of kids had no problem with upper case so I don't see why today's generation would struggle with it.

I quite like it being used for Marney's thoughts. Somehow it seems to make him seem more vulnerable and sympathetic, so it's a good psychological aspect that enhances the strip.

The funny thing is that e-mails and posts on internet sites which use upper-case lettering generally make it seem as though the writer is shouting hysterically - yet for some reason the same style of lettering in comics has always looked perfectly natural to me. Maybe it has something to do with what we learned to accept as normal when we were growing up?

Possibly, also it could be the style of comic hand lettering which looks more accessible and "warmer" than hard text in print?

A belated further thought - a comics story that entirely depends on realistic portrayal of animals is quite unusual too. It's an area where many artists fall short (no offence intended to "Pup Parade") - after all, you study human anatomy for ages in order to draw that. Wildlife comes a long way second. You have live paid models, posable effigies... er.