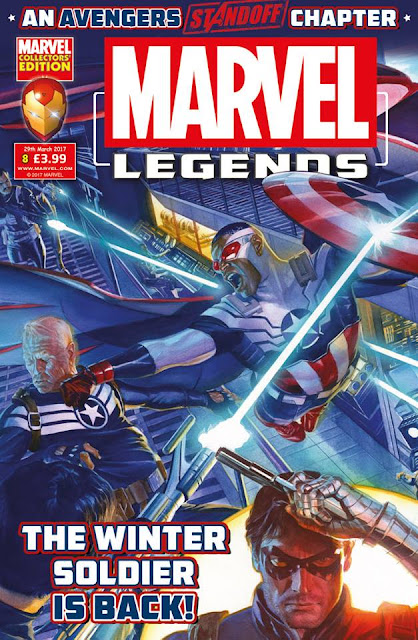 On sale now from Panini UK... 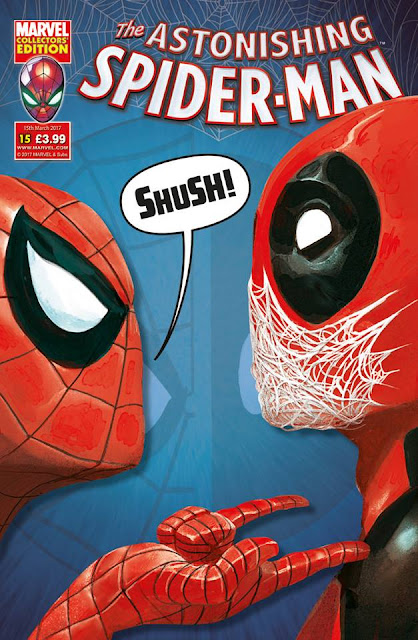 Astonishing Spider-Man Vol.6 #15. On sale 2nd March 2017.
76 pages of Astounding Action-Packed Arachnid-Adventure! Only £3.99!
Power Play continues! Regent has defeated Spider-Man, Iron Man AND the Avengers! Can anyone stop him?!!
Also: Deadpool goes to Hollywood and he’s bringing his pal Spidey with him!
Plus: The Back Cat has put a price on Ultimate Spider-Man’s head, and Hammerhead is gonna collect!
By Dan Slott, Giuseppe Camuncoli, Brain Michael Bendis, Sara Pichelli, Joe Kelly and Ed McGuinness.

The Spidey/Deadpool team-up hasn't impressed me. I think it's more interesting when there's a contrast of characters. Spidey and Deadpool are similar in many respects. I just don't feel it's for me.

Really enjoying the CEs, though, particularly Marvel Legends. I'm wondering whether Panini will continue with Tony Stark Iron Man reprints or go with either Riri Williams or Doctor Doom (I don't envy the job of the editor of Marvel Legends).

It's certainly a problem, deciding on which Iron Man comic to reprint. It'll be the one that is most important to continuity I guess, but as I only read it in Marvel Legebds I'm not sure which one that is. Next issue, the Sam Wilson Cap stories will be replaced by the Steve Rogers series as that will be very important across the whole line in the months to come.

I don't follow Astonishing Spider-Man as I buy the US edition, so I haven't read the Spidey/Deadpool stories. (I don't like the Deadpool comics anyway, although I did enjoy the movie.)

In an ideal world, I'd let MWOM cover the Iron Man/Thor/Cap strips that Marvel Legends can't fit in - but in this 'ideal world', there'd still be no room for everything.

I can buy the TPBs, of course. I'm intrigued by Doom as Iron Man.

No format will ever be perfect. I remember THE COMPLETE SPIDER-MAN and THE EXPLOITS OF SPIDER-MAN, A4-sized and with at least 100 pages (if I recall correctly). Even that format couldn't fit everything in. ;-)

Yeah, it'd be good if they had rotating story arcs for the extra Cap and Iron Man stories in MWOM, but that doesn't look likely. A new comic would be ideal, to accommodate the strips they can't fit in the others but that's even more unlikely I think.

Reprinting Marvel strips in UK comics has been causing headaches for editors since the 1960s because of the continuity between stories. At least the Panini reprints have all caught up with each other now, which makes things a little easier.

I can imagine the headaches. I wouldn't want to be either Scott Gray or Brady Webb, particularly during big crossover events.

It's no major problem as I'll get the TPBs for Infamous Iron Man and the like.

Even the old A4, 10-page format (for, say, THE EXPLOITS OF SPIDER-MAN) caused headaches. I remember a letter in that comic asking why WEB OF SPIDER-MAN issues weren't being reprinted.

In a nutshell, I'm just greedy. I'd love to see regular SPIDER-MAN 2099 here, but where on earth would Mr Webb find the space to reprint it? ;-)

I'm sure they'll choose the right ones to reprint. They haven't let us down yet. As you said, they also publish TPBs so readers can catch up with those.

I always think realistically, all Panini titles could do with being fortnightly, to get through more of the US content, but I guess if sales held up enough to allow this, they'd have done it by now. They'd probably still have to add a couple of extra titles on top and we'd still not be getting the full picture!

Increasing frequency or adding new titles has been suggested in the letters pages a few times but the editors have explained that sales on the existing comics don't warrant it. Some readers can't afford them all as it is, so adding more would be counter-productive and could weaken sakes across the line.

I don't buy Essential X-Men, but I buy every other Panini CE. Like anyone, I have fewer pennies in the pot for entertainment purposes! I can just about afford six CEs - and there are times I wish Astonishing Spider-Man was monthly so as to ease the strain on my wallet - but I could not afford another Panini CE.

I guess I'm a tad greedy for more reprints, though. I never used to be that greedy. When LEM/Fleetway were doing Superman and Batman reprints in the 80s/90s, I knew they weren't reprinting every US title. I knew, for instance, that the LEM/Fleetway Batman title was usually only reprinting Batman and Detective Comics. I didn't have a yearning for, or expect them to reprint, Shadow of the Bat, Legends of the Dark Knight, etc.

I'm happy with the job both Scott Gray and Brady Webb do. I'll buy the Riri Williams Iron Man and Infamous Iron Man arcs when the TPBs are released. I can just about afford that, but I couldn't afford another CE or a higher frequency of Marvel Legends.

They're shuffling the decks. Incredible Hulks is cancelled, Deadpool Unleashed to launch in it's place.
https://www.paninisubscriptions.co.uk/store/products,deadpool-unleashed_1035.htm
https://www.facebook.com/MarvelCollectorsEditions/posts/1627125047299496

Thanks for the info, James. I knew Deadpool Unleashed was coming but I didn't know Hulks was being cancelled. A sad day when a Hulk comic can't sell enough copies to survive but then it wasn't featuring the 'real' Hulk (apart from a few pages of '60s reprint) so perhaps not too surprising.

Sad about Hulks, although A-Force and Contest of Champions haven't grabbed me.

It's subjective, but there always seems to be Hulk reprint comics at a time when the character's universe isn't compelling (I know that's my view). I wanted and asked for a Hulk reprint back in the mid-90s when Marvel UK had Spidey and X-Men titles on the shelves. My idea at the time, which I put in a letter, was for a Hulk comic featuring 3 stories: a then-modern tale, a classic tale and a team-up tale.

I do support Panini, but it was only really Totally Awesome Hulk that I was enjoying.

As for Deadpool, I am a little apprehensive because even the best characters are in danger of overexposure. He's in the Astonishing Spider-Man CE currently so with his own title, that means he'll be in three CEs for the foreseeable future. Risking overexposure?

Personally, I'd drop him from Wolverine & Deadpool - and give his slot to a rotating cast of characters: Bishop, Cable, Gambit, etc.

I would imagine that the Spider-Man / Deadpool team ups will relocate to Deadpool Unleashed soon, but that's just my speculation. It does seem like overexposure having him in three comics but we'll see how it pans out.

I like Al Ewing's writing so I enjoyed Contest of Champions but Incredible Hulks was kind of searching for Hulk-related content. I think we can expect to see the Bruce Banner Hulk return later this year in the USA so hopefully those stories will appear in one of the Panini comics next year.

I must admit, am looking forward to getting Deadpool Unleashed. I am a regular reader of The Incredible Hulks but was disappointed that the Doc Green storyline just seemed to stop just as I was really getting into it.

I do agree with other people on the Net that Deadpool Unleashed should host the main Deadpool storylines. Making Wolverine & Deadpool his secondary title where he could be pulled if Panini wanted to refresh that title's line-up (e.g. making it Wolverine & Old Man Logan?).

I very much doubt any comics rated 'Parental Advisory' like Old Man Logan will appear in the regular Panini comics as they have to consider reactions from parents and retailers.

If they ever did reprint those, it'd be in a 'mature readers' title (perhaps with Punisher and Jessica Jones) and either displayed on the top shelf or bagged like Judge Dredd Megazine. But there's no indication of that happening I'm afraid.