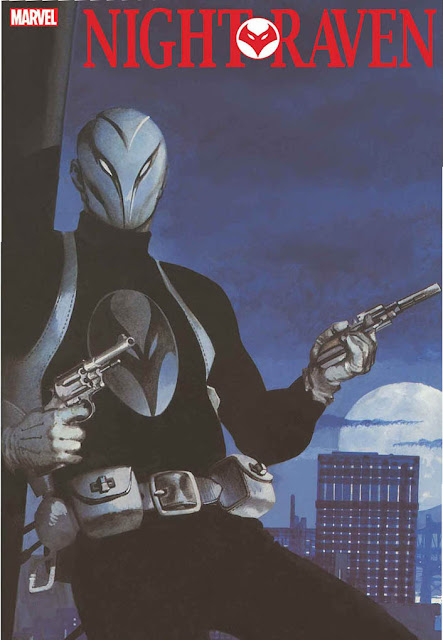 Before V for Vendetta, artist David Lloyd was illustrating another masked vigilante; Night-Raven. The short, three-page episodes ran in Marvel UK's Hulk Comic and attracted a lot of interest. Next week, those stories (and appearances in other comics) are to be collected in a bumper trade paperback published by Marvel Comics. Here's the PR...

Who is Night Raven? Find out in this complete collection of classic tales from the Marvel UK archives! Join the mysterious masked vigilante in his pulp-era war on crime as this lone man of justice stealthily stalks his villainous prey on the streets of New York City - and brands criminals with the mark of the deadly Night Raven! Follow this dark avenger into battle with mob bosses, murderers and miscreants like the Taxman, the Assassin, Dragonfire and more - in rarely seen stories by some of Marvel UK's finest talents, including David Lloyd (V for Vendetta)! Where brooding darkness spreads its evil wings, the Night Raven stings!Parental Advisory

Hang on... Parental Advisory?!? For stories that originally appeared in a children's weekly in 1979? How times change. Night-Raven was created by Dez Skinn and Richard Burton and originally written by Steve Parkhouse and drawn by David Lloyd (although John Bolton replaced David later). The character was very much in the vein of the old pulp heroes such as The Shadow. (The strips were even set in the 1930s.) He later returned in a series of text stories written by Alan McKenzie, Alan Moore, and Jamie Delano, and illustrated by Alan Davis. 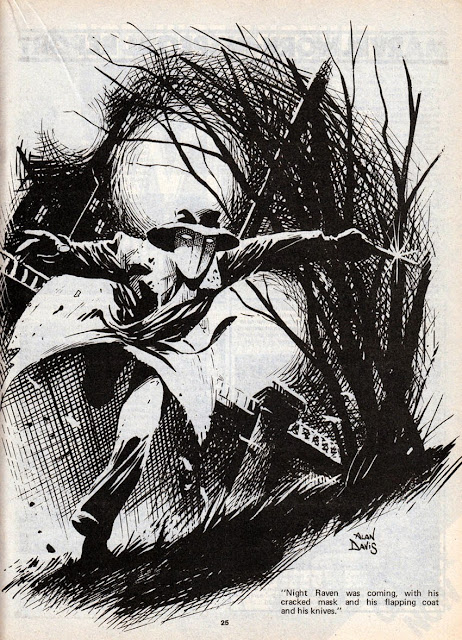 A slim trade paperback of reprints appeared in 1990, published by Marvel UK, but it's expected that the new collection will run to 280 pages and collect all of his appearances from over the years.

Night-Raven will be on sale in comic speciality shops on Wednesday 22nd March in the USA and UK.
Posted by Lew Stringer at 22:28