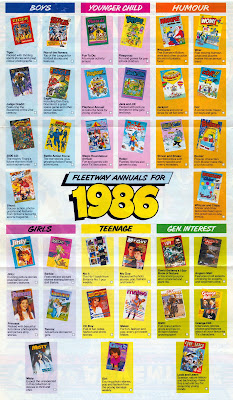 Here's a flyer that was issued in comics in 1985 to advertise the 1986 range of IPC annuals. Recognize any that you had 25 years ago?

What a sad state of affairs that there are so few comic annuals published today, mostly replaced by merchandise-connected titles. However, the writing was on the wall 25 years ago with tv and merchandise related books such as Barbie, Grange Hill, and BMX beginning to make their presence felt and an already-dwindling number of comic annuals on the list. Even many of the books that were published that year (eg: Cor!!, Jackpot, Jinty,etc) no longer had their weekly comics. The sun was beginning to set on IPC's once mighty comics empire. For example, compare this list to the one for 1973 when IPC's comic titles dominated the market:
http://lewstringer.blogspot.com/2008/11/fleetway-annuals-for-1973.html

On a personal note, the Jackpot Annual 1986 featured my first artwork for IPC; drawing a four page Scooper story.

I've still got the Buster Book 1986 somewhere (and about a dozen more of that title). This is a snapshot of a bygone era; such a pity we'll never see its like again (judging by the standards of modern day annuals, at least).

You can see it at my blog..
http://petergraycartoonsandcomics.blogspot.com/2009/07/lew-stringer-drawing-for-whoopee-and.html

I agree what happened!!
Also the variety on offer is very impressive on that picture of 1986..todays annual have very little content some are just reprints from the mag/comic..basic puzzles..and loads of photos and little text..very uninspiring

Truth be told, the writing was on the wall even back in 1972, if you look carefully. Although it is definitely interesting to note that there were "adult" annuals actually being advertised back then (there are still some now - "Warship" for example, which my father-in-law reads) the 70's were not merchandise-free.

There is a 'Sindy' annual in that advert. Isn't she the UK's answer to Barbie? There is also the television-derived 'TV21' (is that not one of the annuals that depicted the TARDIS launching like a rocket, or am I too late in that regard?).

Merchandise-driven products were clearly already taking root in the 70's. The 80's took it too far (and the less said about everything since then, the better) but if it had been handled better, it wouldn't have destroyed comics they way it did.

On a complete tangent, has anyone else noticed that although those sports annuals are marketed as "for boys and girls", all six show nothing but men on their covers?

Wouldn't have thought I owned any of those as I was with comic-hating Liz ( she loved me for my record collection ) at the time they were published. However. I can see the 2000AD annual on the shelf opposite as I type so I obviously rebelled at some point. Just wish I'd picked up Judge Dredd and Misty at the same time.

The 2000AD highlights are colour outings for Ace Trucking and Johnny Alpha by their definitive artists Bellardinelli and Ezquerra, plus Dredd clamping down on caffeine and a reprint of Shako from the early progs of 2000AD.

Strange seeing those annuals from half a lifetime ago. Girlfriends may come and go, but a psycho polar bear is for life.

Yes, fair points Zoe. What I meant was that originated comic annuals were becoming thin on the ground but the merchandise-based ones were still stable.

There had always been comics based on licensed characters of course, even going back to the Thirties with Mickey Mouse Weekly or the 1920s with Film Fun, but by the 1980s non-licensed comics were dying out.

Hang on.. your first IPC artwork was in that Jackpot annual? I'm pretty sure i got that one some place.. I'll have to hunt it out sometime