Another teaser trailer has been released for the new Thunderbirds Are Go series. There's a blink-and-you'll-miss-it scene showing all six Thunderbirds team members. Yes, that's right. Six of them, including new female character Kayo, a more active character than the mostly decorative Tintin from the original series. I've posted a screen grab of the six characters above.

Considering that Kayo is wearing a uniform and appears to be holding a helmet I think it's safe to assume she will be piloting a craft of her own. Stay tuned!

You can watch the trailer at this link:
http://www.gerryanderson.co.uk/new-thunderbirds-go-trailer-released/ 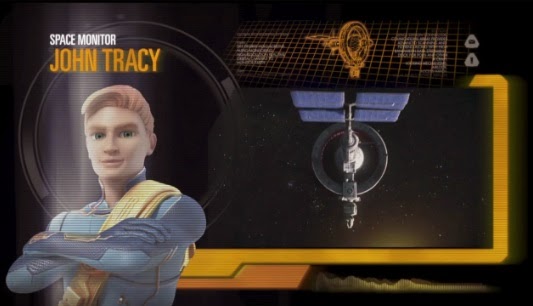 As for DC Thomson's official Thunderbirds Are Go magazine, it's still early days and no info has been released yet but I'll post news as soon as I get the go ahead.
Posted by Lew Stringer at 14:22

Email ThisBlogThis!Share to TwitterShare to FacebookShare to Pinterest
Labels: Thunderbirds

Here we go again - the obligatory female character shoehorned in. They did the same in 'The Hobbit' films with that female elf - but those three films were so shamelessly dragged out that they'd have included just about anything to make them last longer I admit.

Don't you think it's a good thing for Thunderbirds to have another strong female character? All I remember of Tintin was that she made the tea sometimes.

I've just been told that Kayo is the team's security chief.

I think it's a great thing in this day and age. The original was from another time, but these days it'd feel a bit out of place not to have a female Tracey pilot. Hawaii Five-0 and Battlestar Galactica both very successfully updated their character roster by actually changing characters to female. Makes it more modern obviously but also more interesting.

That's right. After all, Gerry Anderson had female pilots in Captain Scarlet so it's following that tradition I guess. It's also nice for girls watching it to have an action heroine to relate to who's an equal with the boys. Hopefully Lady Penelope will also still be an interesting character.

Why don't they just use TinTin?

I understand it's because the Herge character is better known in the UK now than it was in 1965. Also, I suppose when they release toy figures they prefer not to have it confused with him. There's possibly some concern about litigation too.

Is anyone surprised at this revelation of a "strong" female character? This new character sounds very much like Ziva David from the NCIS tv show. I predict that Kyrano will be white, so his half-brother the Hood, the villain from the old puppet show will be white too, it would be so politically incorrect to have a an asian servant and an asian villain! Also Jeff Tracy will be now be black! Or perhaps Lady Penelope will assume the authority role, ripping off the female M from the recent James Bond Franchise.

Why are some people so annoyed by a female character being an equal to the Tracy boys? I don't get it.

As for the other characters, you're assuming they're all going to be in it...

Thanks for publishing my message and your comment. Actually, I don't object to a "strong" female character. I am currently enjoying those old British Avengers shows on TV on week-nights from the '60s and that Emma Peel really kicked some ass! Plus she was very intelligent too! Now that is one of the greatest characters from tv. But now the fashion is let's change characters: so the new Ghostbusters will be all-female, Thor is a girl and maybe the next James Bond will be a black guy! So if this "Kayo" character is more than just a martial artist and a weapons specialist, it would be interesting. But what I seem to remember about those old Thunderbirds shows is that they were not so violent, it was focusing on the technology and the drama of the rescue. Now if the new show concentrates on what made Thunderbirds so special not only in the '60s but also in the 80's it will be a winner with the modern cgi effects. But if it focuses too much on action and say in-fighting and arguing between the brothers, how will it be so different from anything else we see today?

That's right. All the tension in the old series came from the rescues, or chasing the Hood, not fighting. I suspect the new series will be the same but with CGI characters we can probably expect more physical action than was possible with the puppets. I understand there are no guns in the new series though so if there is violence it will probably be hand to hand combat.

I can understand the idea of shaking things up a bit in terms of gender or race. I'm not following the Thor story but if it results in a good story arc, why not? The status quo can get boring sometimes. The current Captain America is black, and it throws the series in a new and interesting direction.

I'm sure the new Thunderbirds will have its bad points but personally I don't think a female member will be one of them. Yes, another character will have his ethnicity changed, but I don't think it'll affect the story. It may be seen as 'political correctness' but we live in a multi-cultural society. Having a show where all the good guys are white and the non-whites are either ineffectual (Kyrano, Tin Tin) or evil (The Hood) doesn't sit so well today. So yeah, bring on variety. The only thing that concerns me is: will the stories be any good?

Like you Lew I'm looking forward to seeing it and think the changes are great. If nothing is updated then what would be the point? The aforementioned series in my comment above show this perfectly I think. If people just want exactly the same as before then they can go and buy them. This is for a modern audience, and we must remember we're not the target, it's the kids, just like we were in either the 60s or 90s.

Agreed, Phil. A children's TV show has to reflect the world of the kids it's aimed at to an extent. Times have changed in 50 years. I don't think it's 'PC' to show more balance in genders and race. Personally I'm looking forward to seeing what craft Kayo flies. I know it's not one of the five familiar Thunderbirds. I suspect her vehicle/plane will become the most collectible toy too, being a new one.

I guess that is what it is really all about - toys, the toys market and the exploitation of other media. After all those were the prime reasons Disney bought Marvel.

It was always that way, Anon. There were numerous toys, colouring books, etc based on Gerry Anderson shows in the 1960s too. It's still a TV series first and foremost though, with a lot of energy and creativity invested in it.

Here's an interesting fact.
the woman is NOT a new character.
Kayo IS Tin-tin. (i am not makign it up, do the research and you'll be surprised)

Kayo IS tin-tin
i'm not joking i only just found out
so she's not a shoehorned character..if anything a re-worked character...just as well considering tin-tin didn't exactly do much in the original series