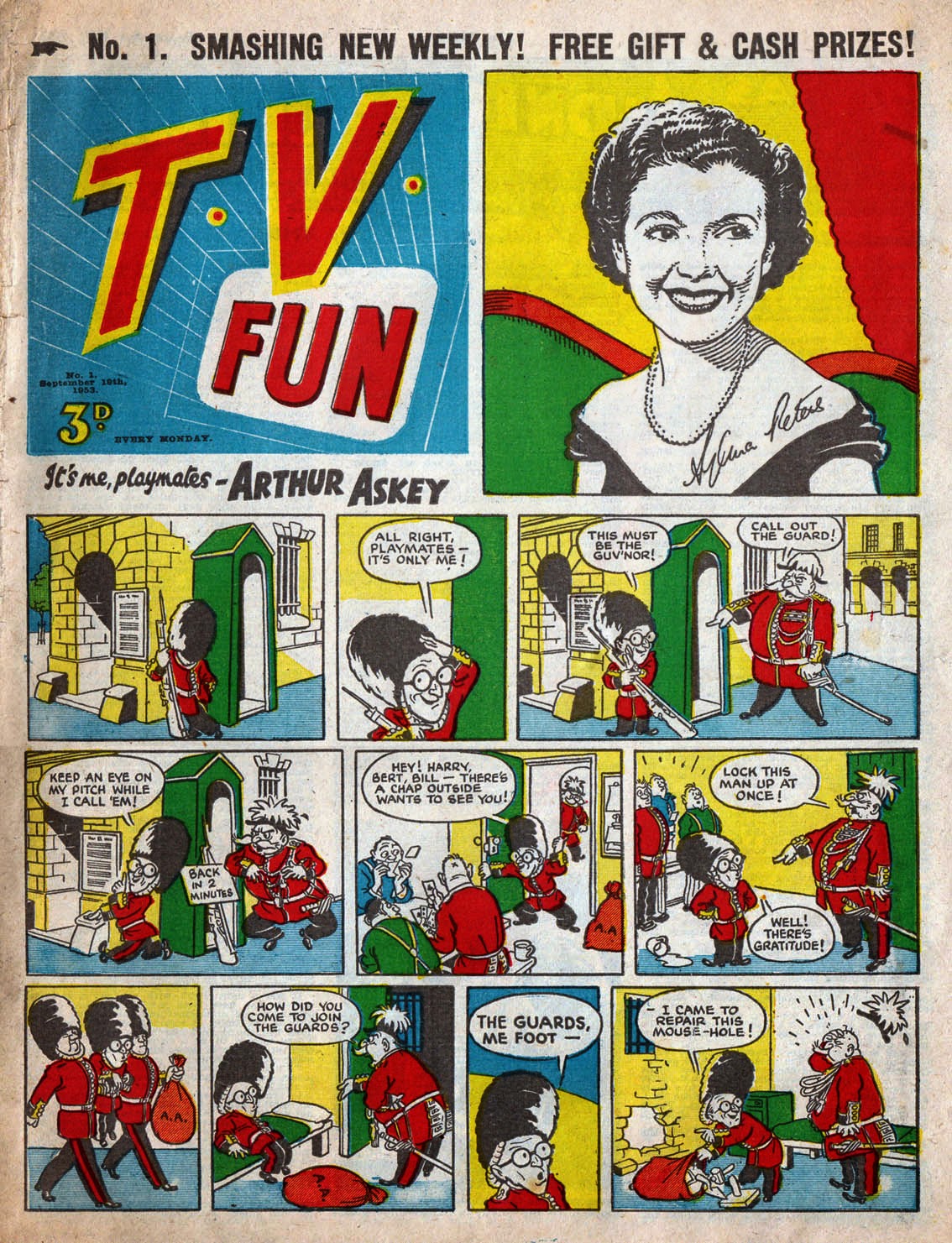 The year 1953 was a turning point for The Amalgamated Press. In one fell swoop they axed their three longest running comics. Comic Cuts, Illustrated Chips, and Wonder (formerly The Funny Wonder) were all cancelled in the same week, and replaced the following week with a brand new comic, TV Fun.

Clearly A.P. were determined to appear up-to-date by jettisoning their oldest comics in favour of one that reflected the new television age. Comic Cuts and Chips had run for over 60 years. Would TV Fun prove to be a worthy successor? Sadly not. It survived for just six years, changing its title to TV Fan for its last few months and merging into the romance comic Valentine in 1960.

Truth be told though, TV Fun wasn't a bad comic by any means. It was perhaps just not as modern-looking as A.P. would have hoped, despite its full colour covers (which the extinguished comics had lacked). To its credit it did feature work by some of the top artists in British comics, so let's look at a few pages from issue one.

On the cover (above), the Arthur Askey strip had sort of made the jump from A.P.'s Radio Fun to herald this new venture. The artwork is by Arthur Martin.

Turning the page, the first thing the reader would be confronted with was a two page text story As Midnight Chimes. Prose stories like these were still a common feature of comics of the 1950s.

Panel shows have always been a staple part of the TV schedules (because they're relatively cheap to do) and TV Fun reflected that with Put Your Question. I thought this was the work of Cyril Price but I'm reliably informed by comic historian Ray Moore that it's by Alex Akerbladh, and the last series he drew for A.P. 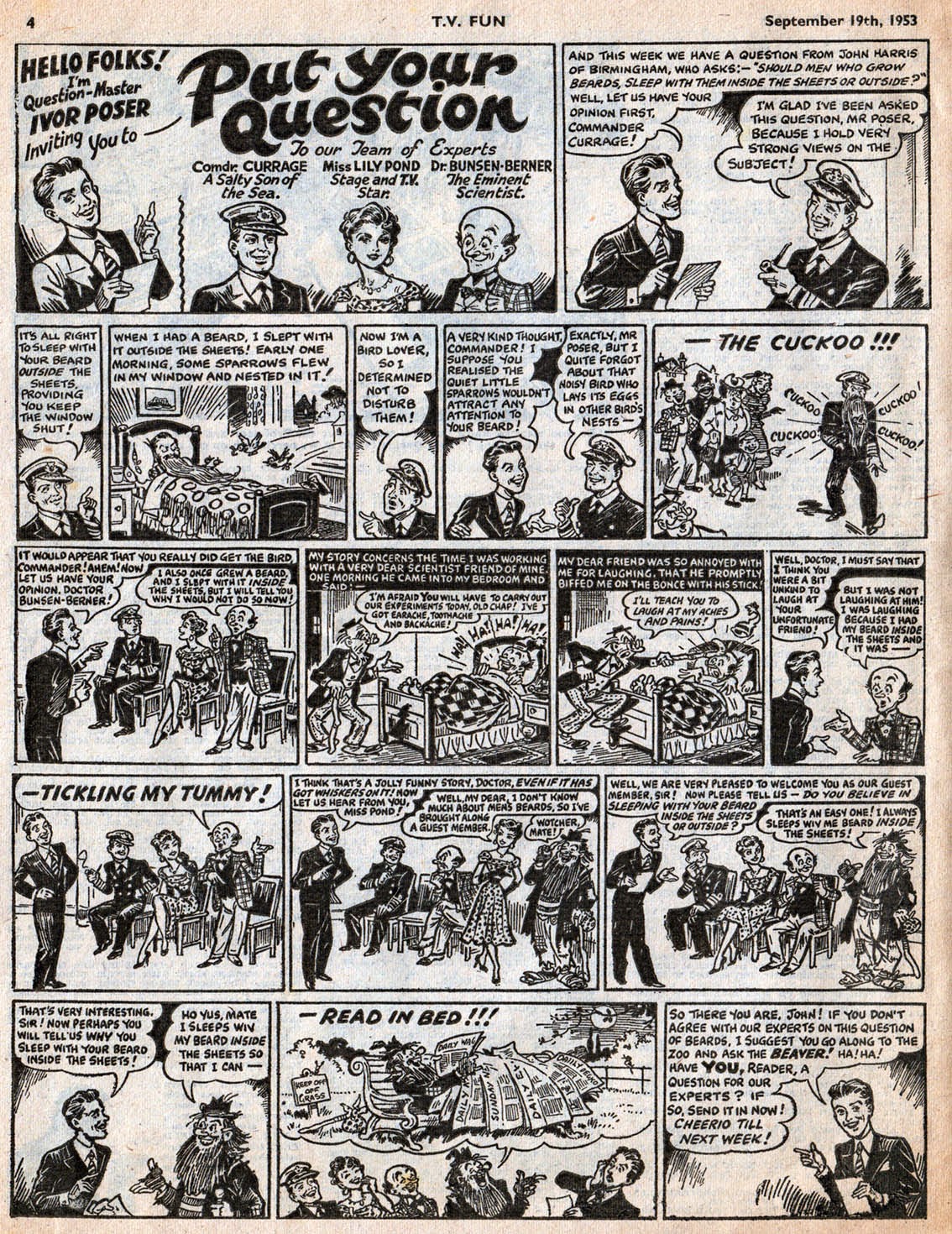 TV Fun contained a good balance of humour strips, prose stories, and adventure strips. One of the latter being Call In The Yard... 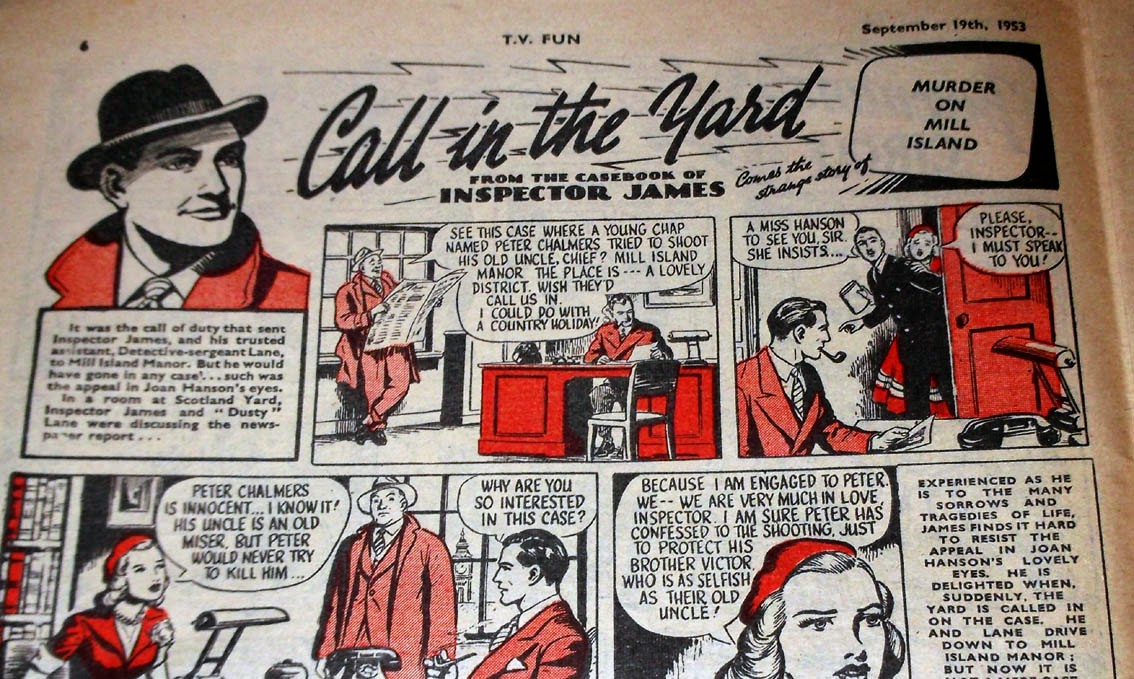 No less than five prose stories appeared in the comic. One of them was a complete story featuring super-spy Valda... 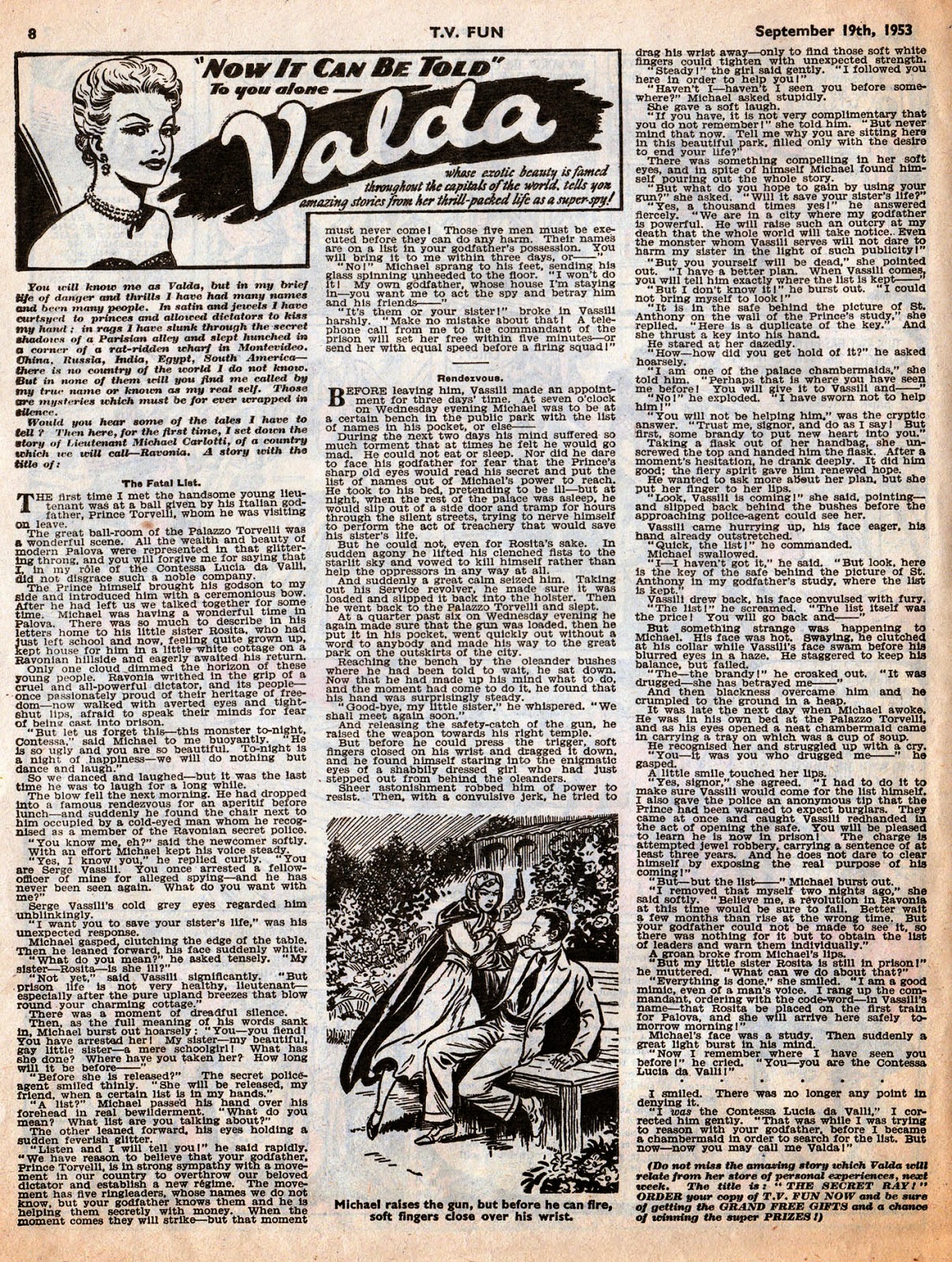 An adventure strip was awarded the full colour centre pages, with chapter one of The House With Red Shutters illustrated by George Heath... 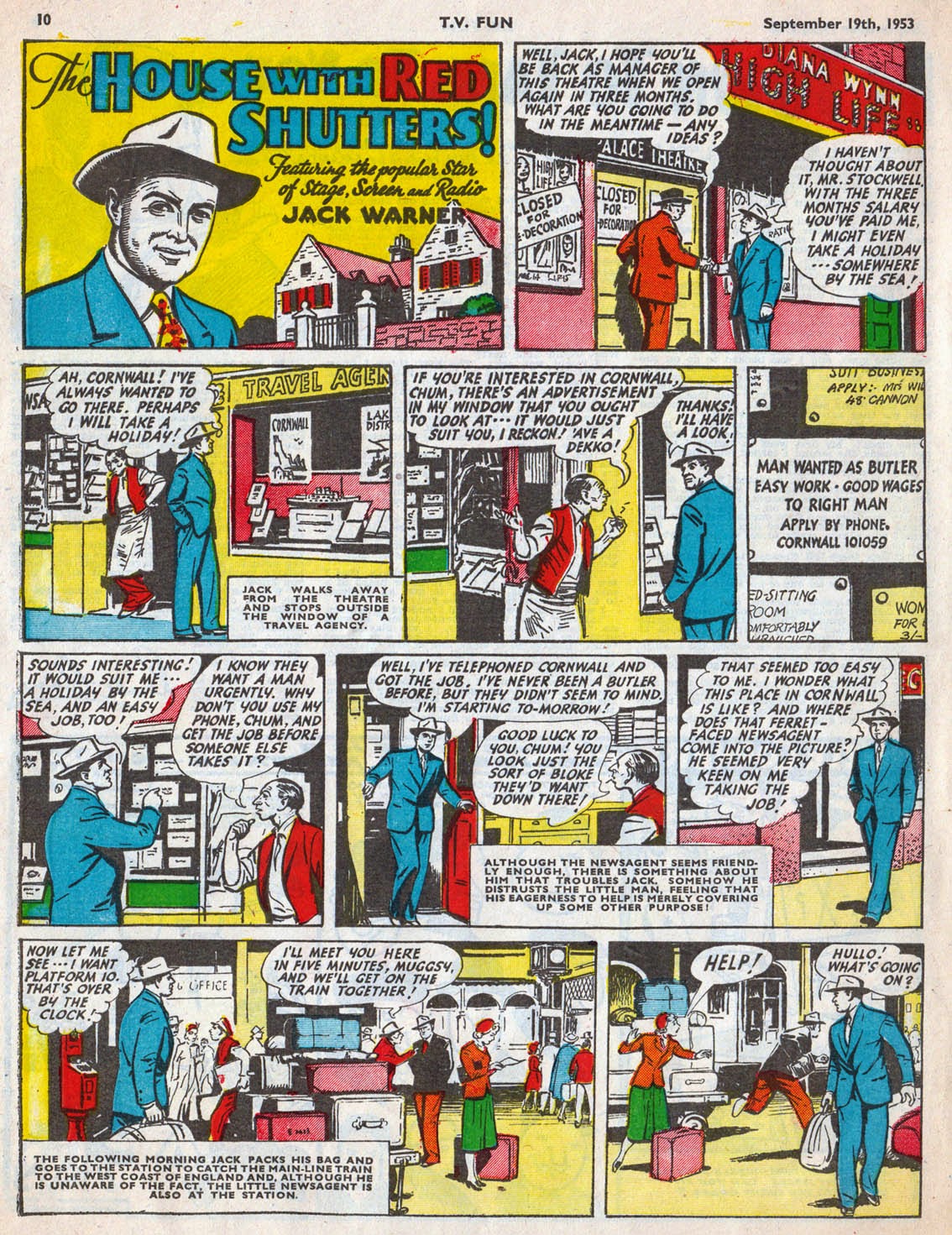 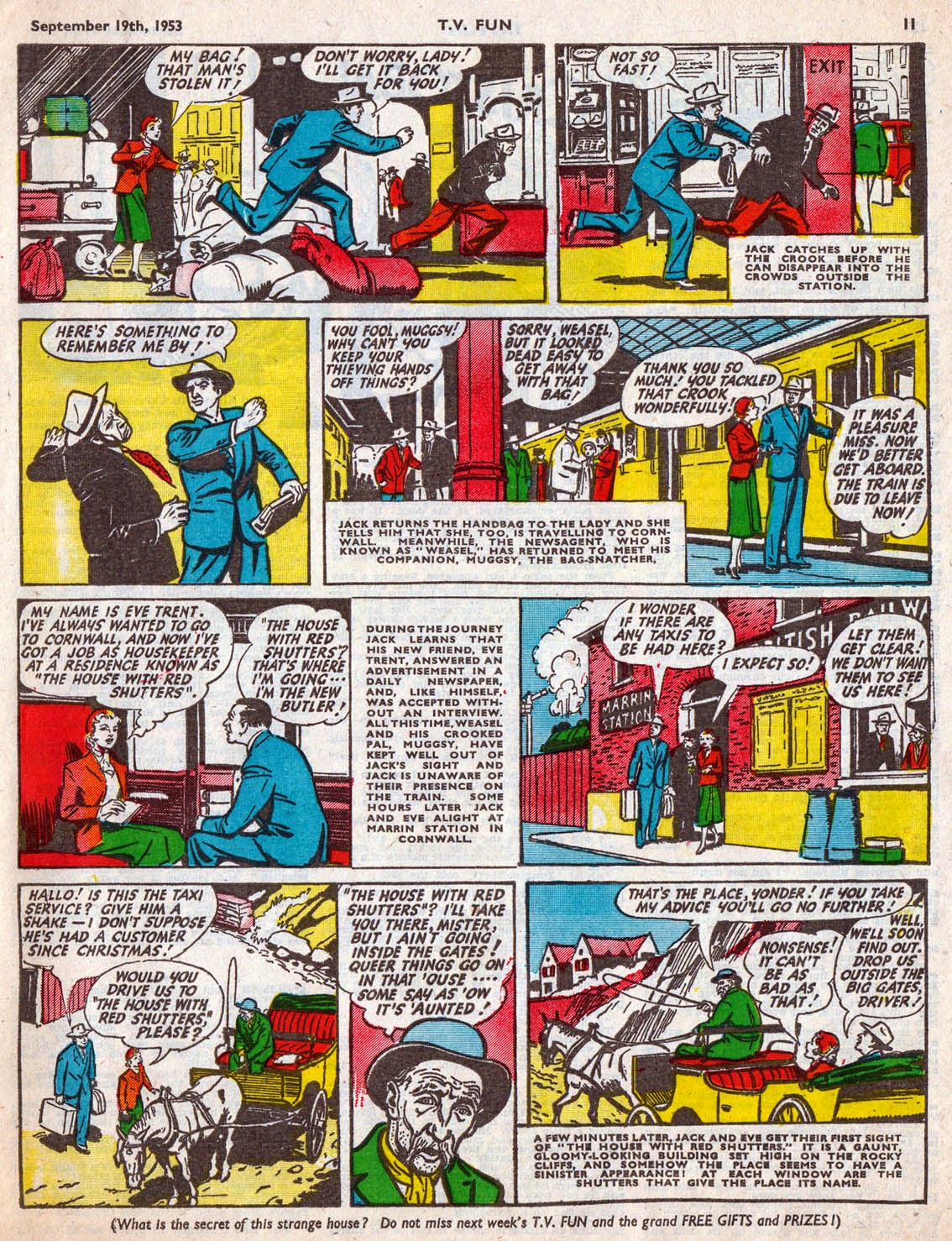 The excellent Roy Wilson had a place in the new comic too, with two strips on page 14: Who's Who in Our Zoo, and Hoofer the Tee Vee Gee Gee. Neither of which were actually TV characters but TV Fun seemed to be aiming for the essence of a TV show in some of its strips, rather than filling it with adaptations. 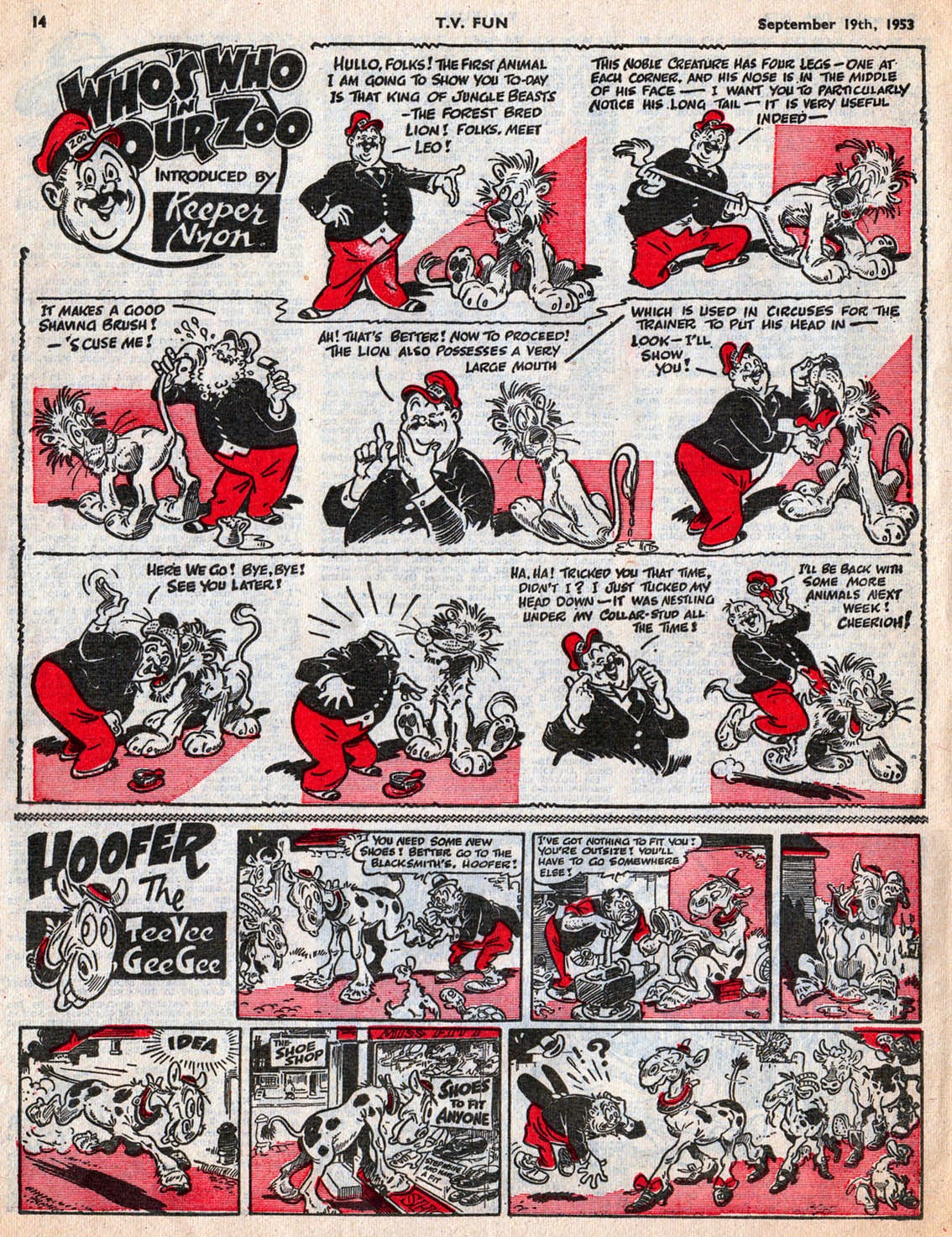 However, a TV celebrity did appear on the facing page in the form of Jimmy Edwards. Artwork by Reg Parlett, packing a lot into the page... 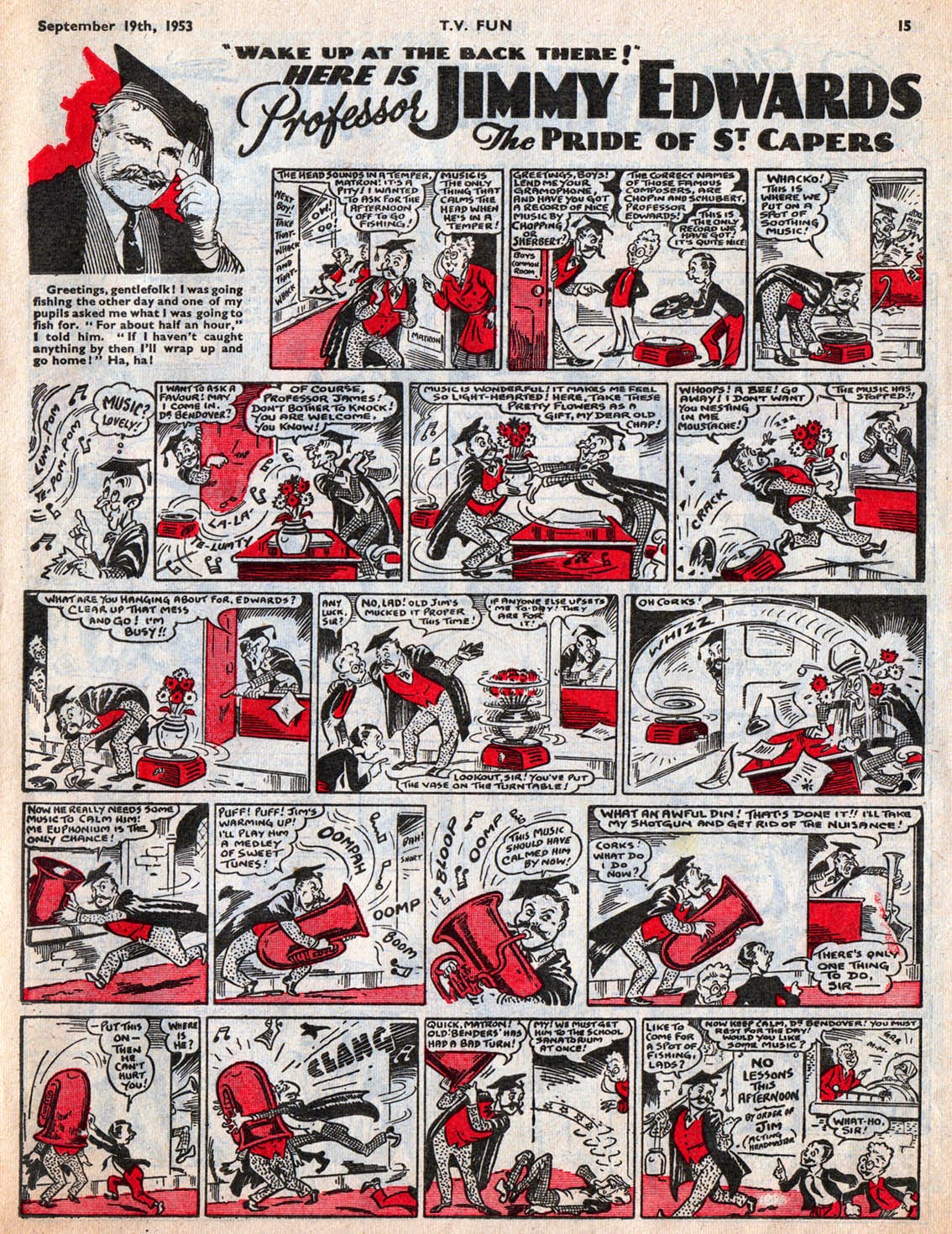 Despite this being a new comic and the company's big new launch, the editorial didn't appear until the inside back page, tucked away at the bottom. There the editor welcomed the readers, told them of things to come, and recounted his week. Which is all well and good until he cracks a racist joke.

On the back page, a full colour strip starring Diana Decker 'The Cutie Queen of the TV Screen'. Judging from the times Ms.Decker flashes her legs in this and subsequent strips I think it's fair to say that A.P. were aiming TV Fun at an older reader than Thomson's Dandy and Beano. It looks to me that Bertie Brown was the artist of this page, and well chosen too for his ability to draw the female figure. 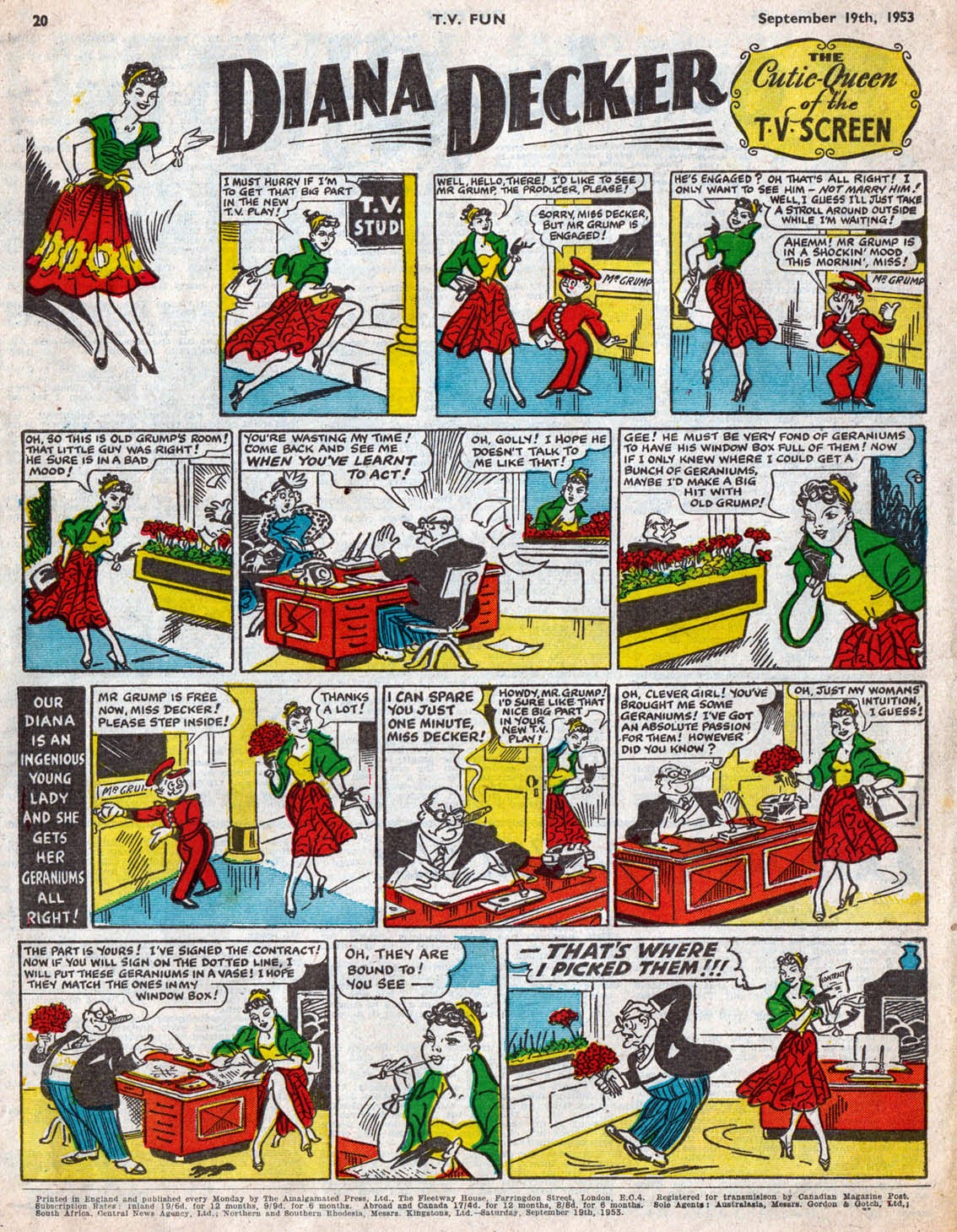 Surprisingly (to me at any rate) I won this first issue on eBay last week for just £9.99. Either not many people noticed it or interest in pre-1960s British comics is waning fast. Of course, many collectors buy for nostalgia, and anyone who had this comic as a child would be in their late sixties by now and most likely to be cutting back on their collection rather than building it up. I hope showing a few pages from it here have been of interest to readers of this blog anyway.

As always, click on each page to see it at a larger and more legible size.
Posted by Lew Stringer at 00:14

An odd collection of stories. As you say it may have been aimed at older readers, and the inclusion of Text and 'funnies' continues right into the eighties in DCT titles, but there seem something a little stiff or overly serious about the main stories, it does not look very appealing but I know I am looking at it with modern eyes.
You are certainly right about Roy Wilson, I am only familiar with him through you blog, but a great artist!

Sorry for the double reply, but as I look at that Roy Wilson piece, did that Leo the Lion continue on in another comic (Lion?), it very familiar!

No problem with double replies. I've done it myself here often enough. :)

The lion in that strip was just an incidental character for that one week but many artists were influenced by Wilson so that style would seem familiar if anyone else drew lions I suppose.

The thing about TV Fun was that for a fifties comic it looked very 1940s! When you imagine that this was trying to compete with Eagle, Beano, TV Comic and numerous British editions of American comics... well, it looked very old fashioned from the outset.

That said, the quality of artwork was very high.

Strangely upset by the comment about reaching an where you're 'most likely to be cutting back on a collection rather than building it up' . But it’s true, in a few years I shall have to think about disposing of my collection so as not to lumber my kids with it! Plus which, as your experience with TV Fun shows, once the nostalgia demographic starts to thin out, the value will reduce correspondingly. I can foresee a day when all those issues of TV21 currently going for a goodly amount on eBay will plummet in value. Though that doesn’t seem to apply in the US back-issue market (or is that just for key characters?)

I'm sorry if it upset you (or anyone else) Mike. I'm pushing 56 myself so I just saw it as a practical comment. After a mad flourish a while back I've now drastically cut back on buying comics, apart from a few I like or if I need them for reference.

Sad thing is, we can't keep buying them forever, even though some days it might only seem five minutes since we read our first comics. That's why I welcome things like those big revamps that DC and Marvel do. We get to see how the sagas end in our lifetimes. Yay! Anything that comes after those revamps is strictly for the new kids on the block.

Ha ha...that's all right, Lew, I'm over it. I'm just about exactly the same age as you and, like you, hardly buy anything these days. I've still got a 'ton' of old US comics in the loft, though, that I keep promising myself will go on eBay 'as soon as I can get round to it'!

If I recall correctly, Jimmy Edwards still had a comic strip in the 60's ... was it in the Buster?

Interesting that some of the later installments were reprints ...

Buster (and other Fleetway comics) reprinted a lot of stuff over the years. The last few years of Buster were *all* reprint!