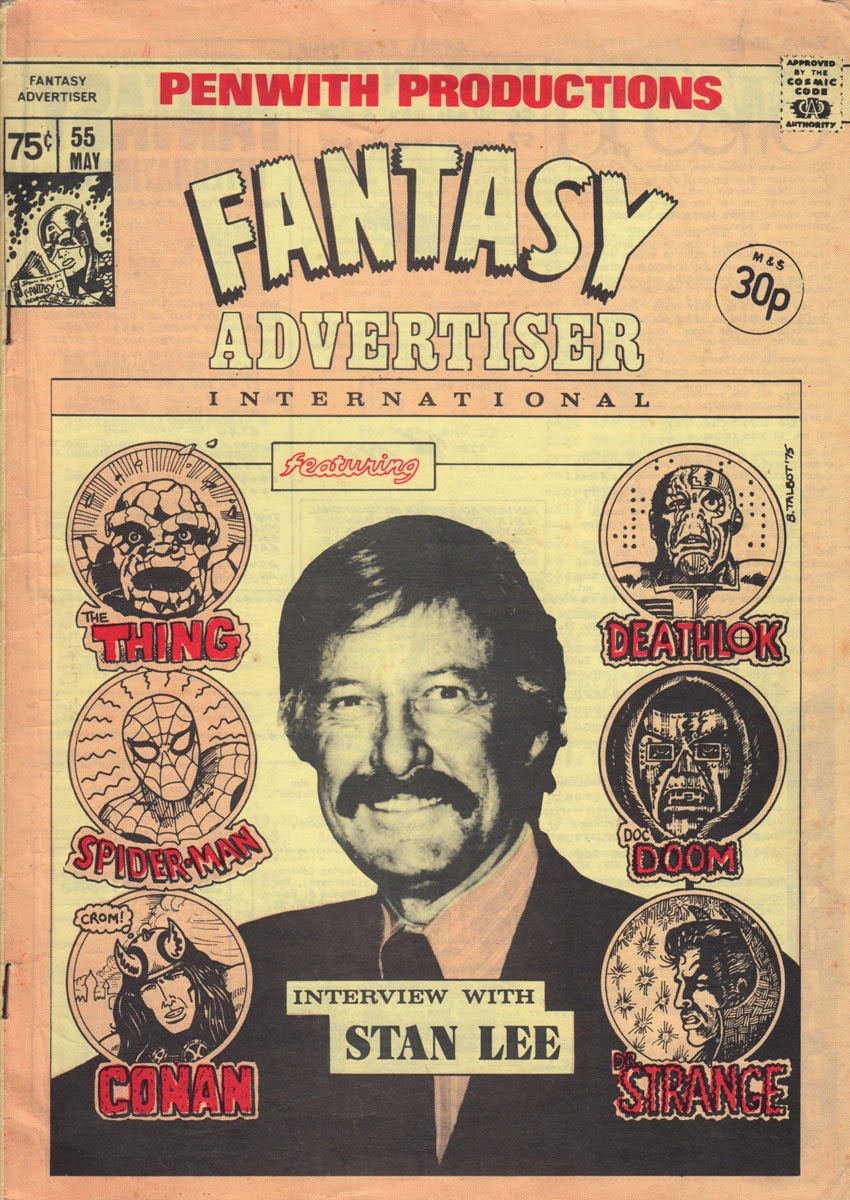 Comics fanzines are pretty much a thing of the past now, replaced by websites and blogs like this. That's fine for news, comment, and articles, but you can't beat a good fanzine cover. And the 1970s and early 1980s had some crackers. Many of us started out in fanzines and some pros were still happy to contribute the occasional cover when asked. Above is the cover to Fantasy Advertiser International No.55, April 1975. The images surrounding Stan Lee's grinning mug shot are by Bryan Talbot in his early days.

Let's take a look at several more. Today, Graham Bleathman is renowned for his fantastic cutaway paintings of Gerry Anderson vehicles and suchlike, but back in 1978 he was making his debut with his self-published fanzine Magazine of Tomorrow. Graham's art improved rapidly in subsequent issues... 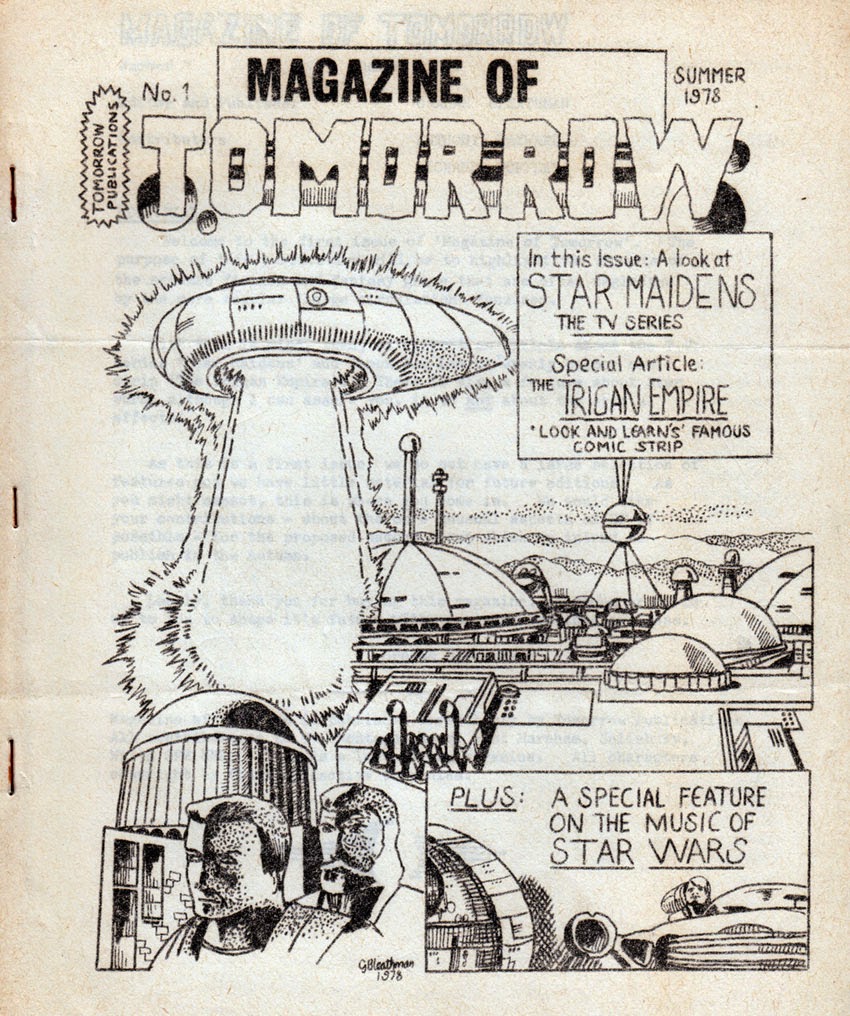 Comic Media News was edited by Richard Burton who'd later go on to be an editor at IPC/Fleetway/Egmont on comics from Tiger and 2000AD to Sonic the Comic. This cover to issue 29 (Jan-Feb 1977) is by Brian Bolland... 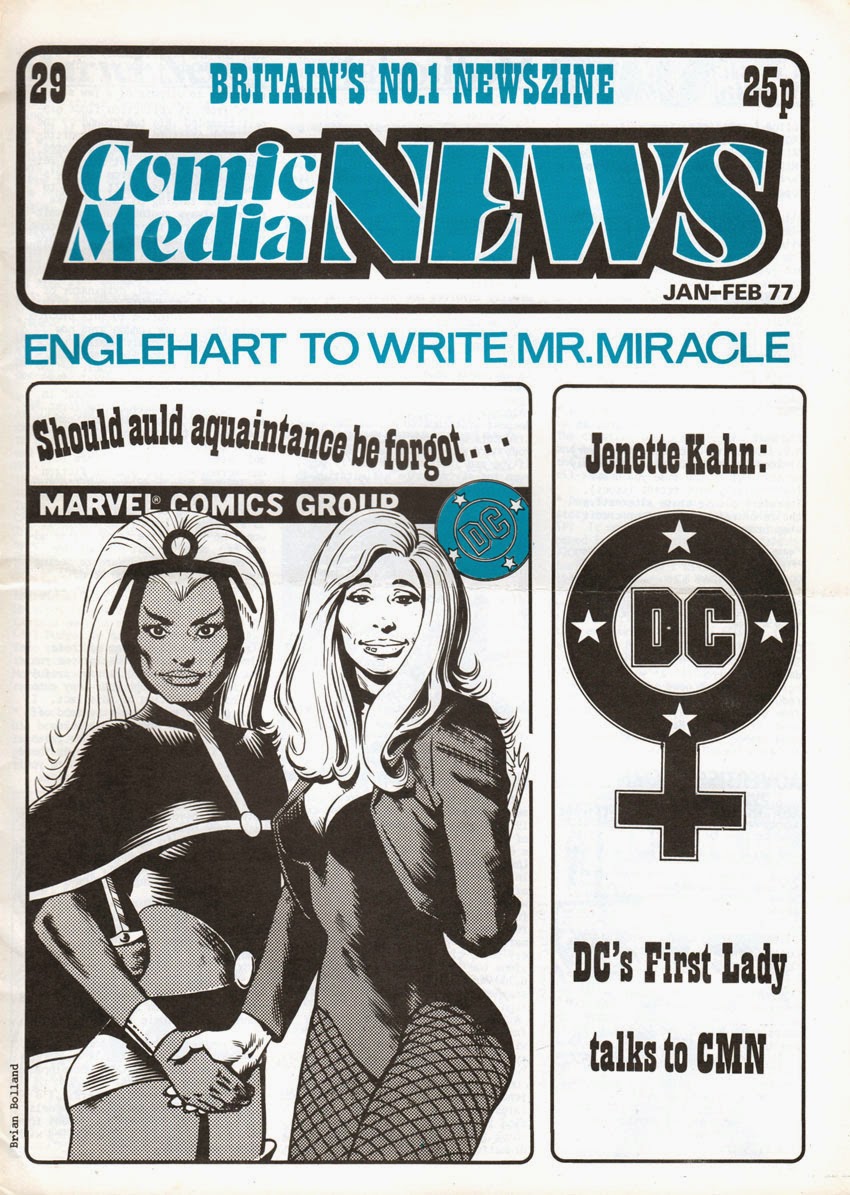 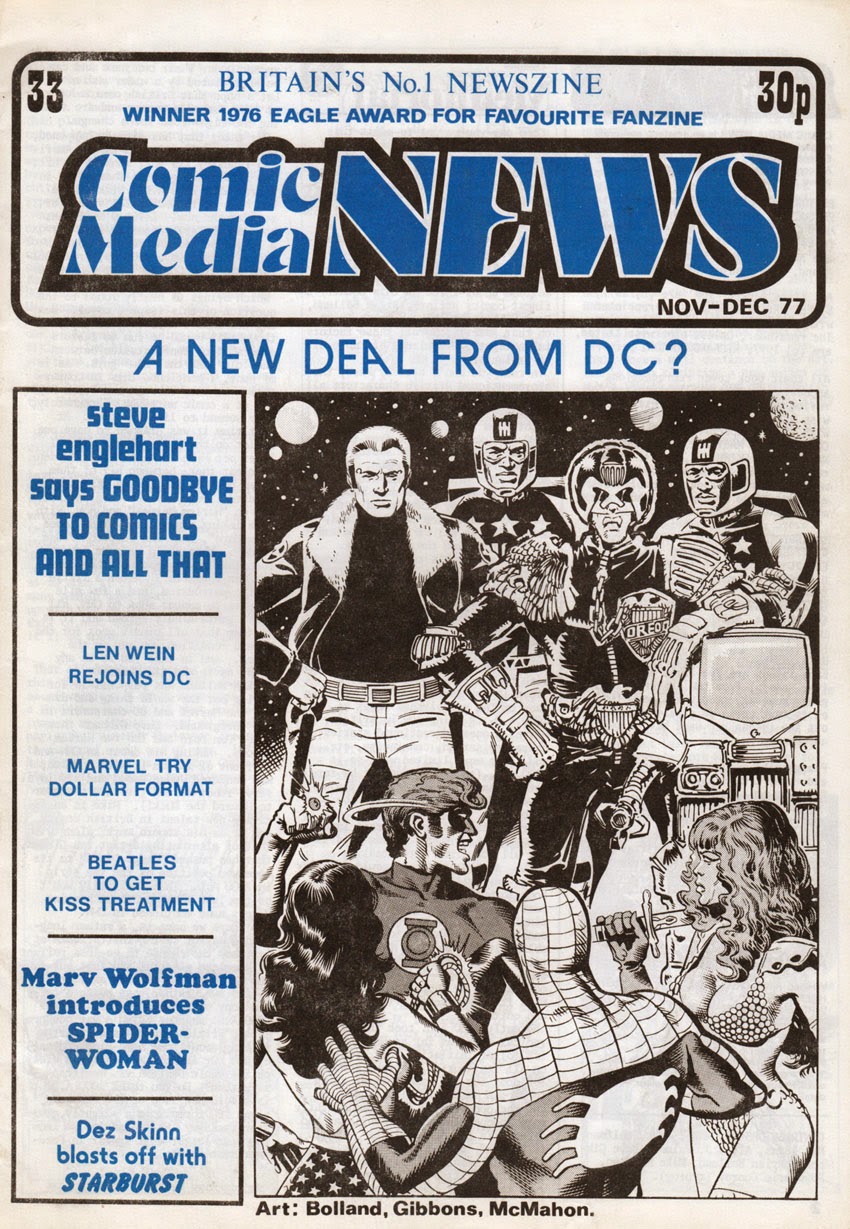 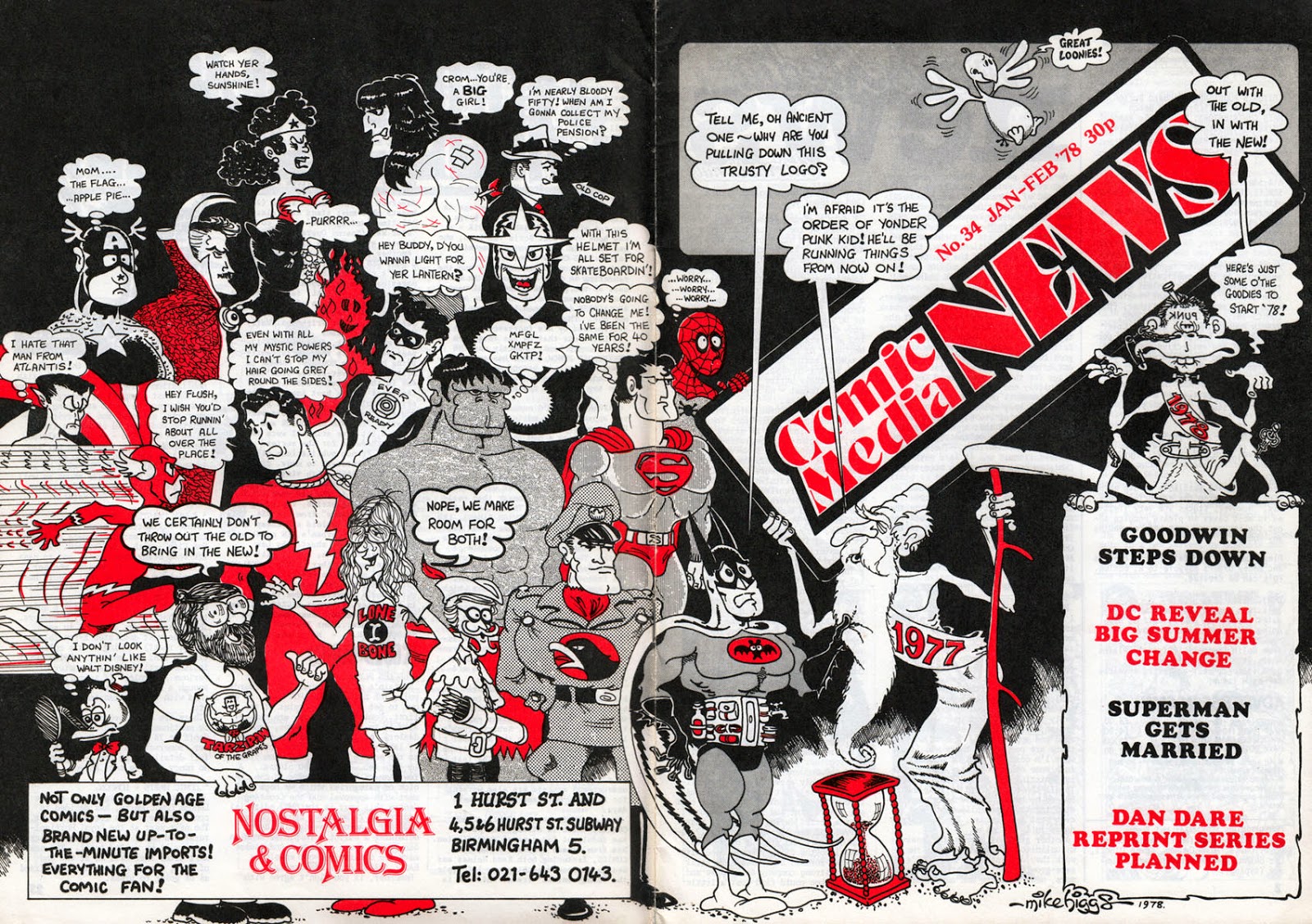 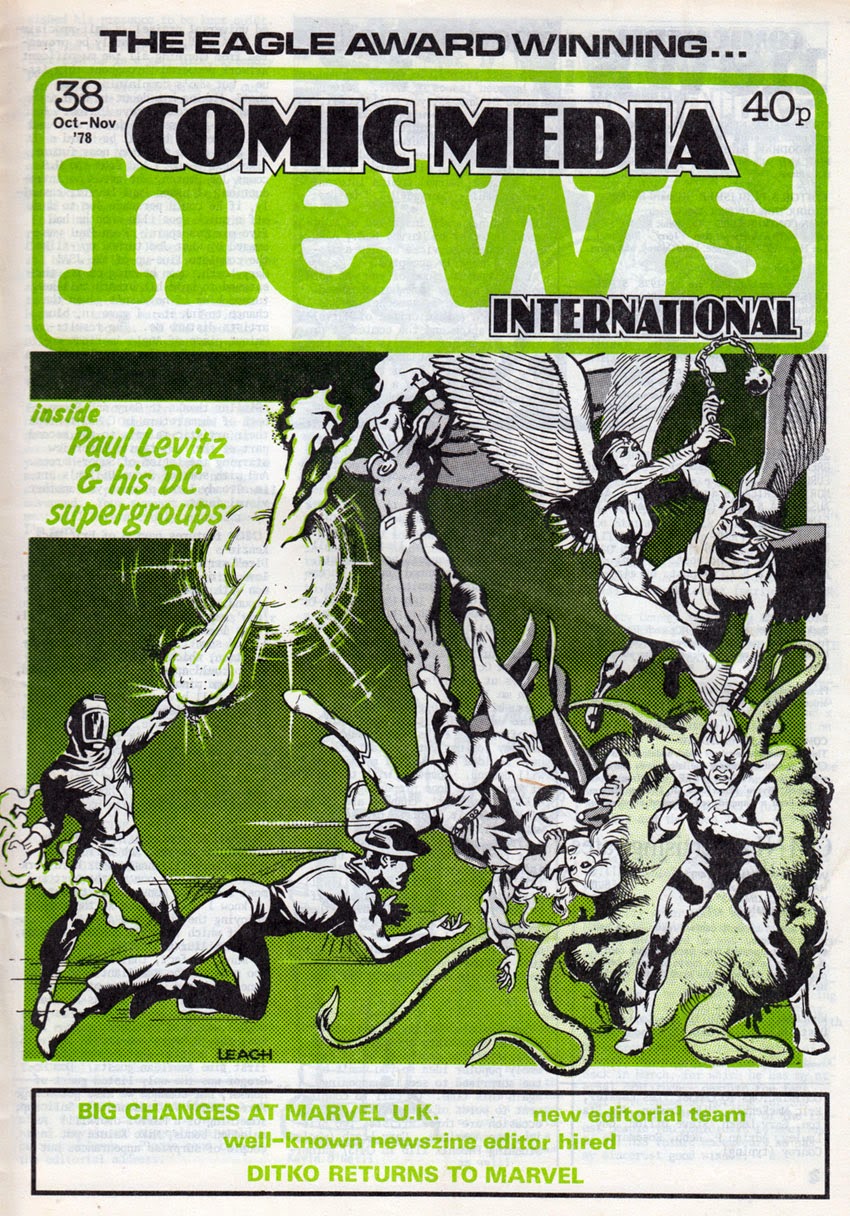 BEM (formerly Bemusing Magazine) was published my Martin Lock who later set up Harrier Comics. This cover to No.22 (January 1979) is by the ever-brilliant Hunt Emerson... 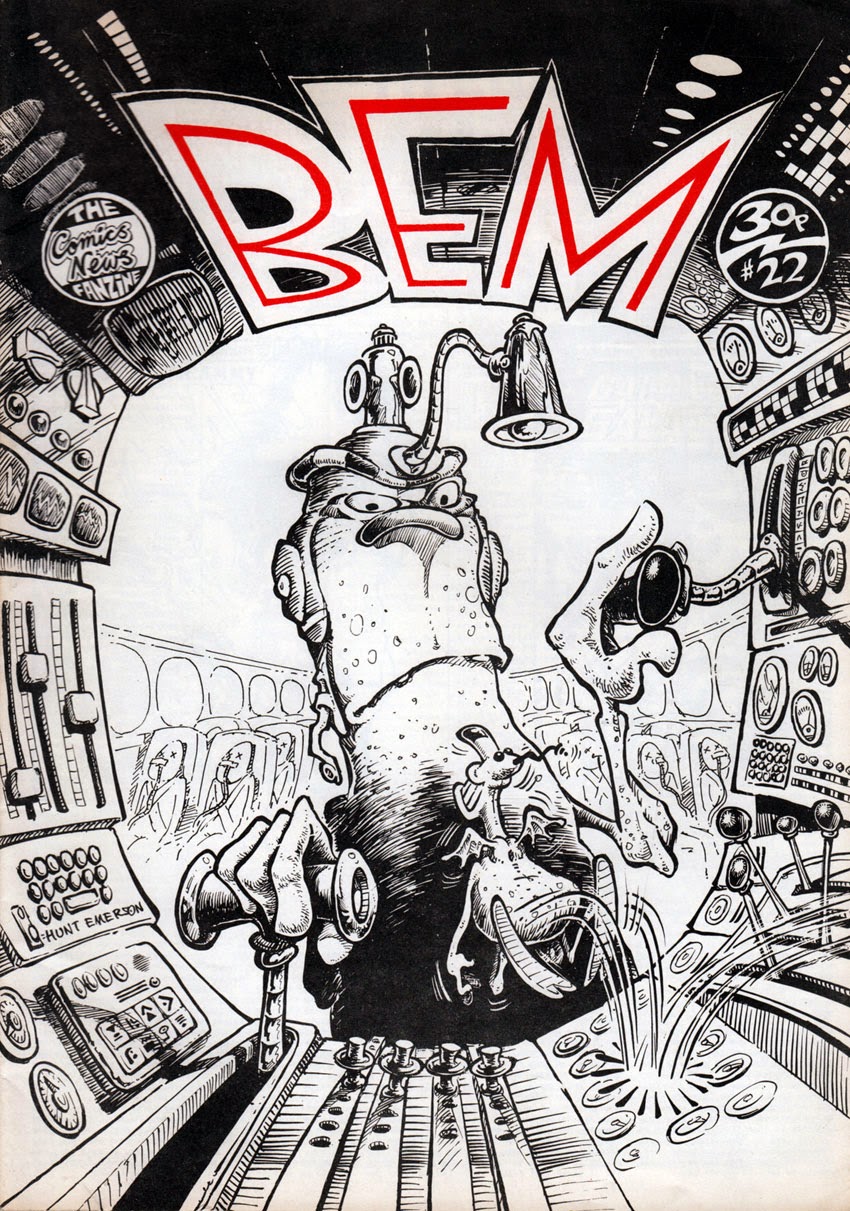 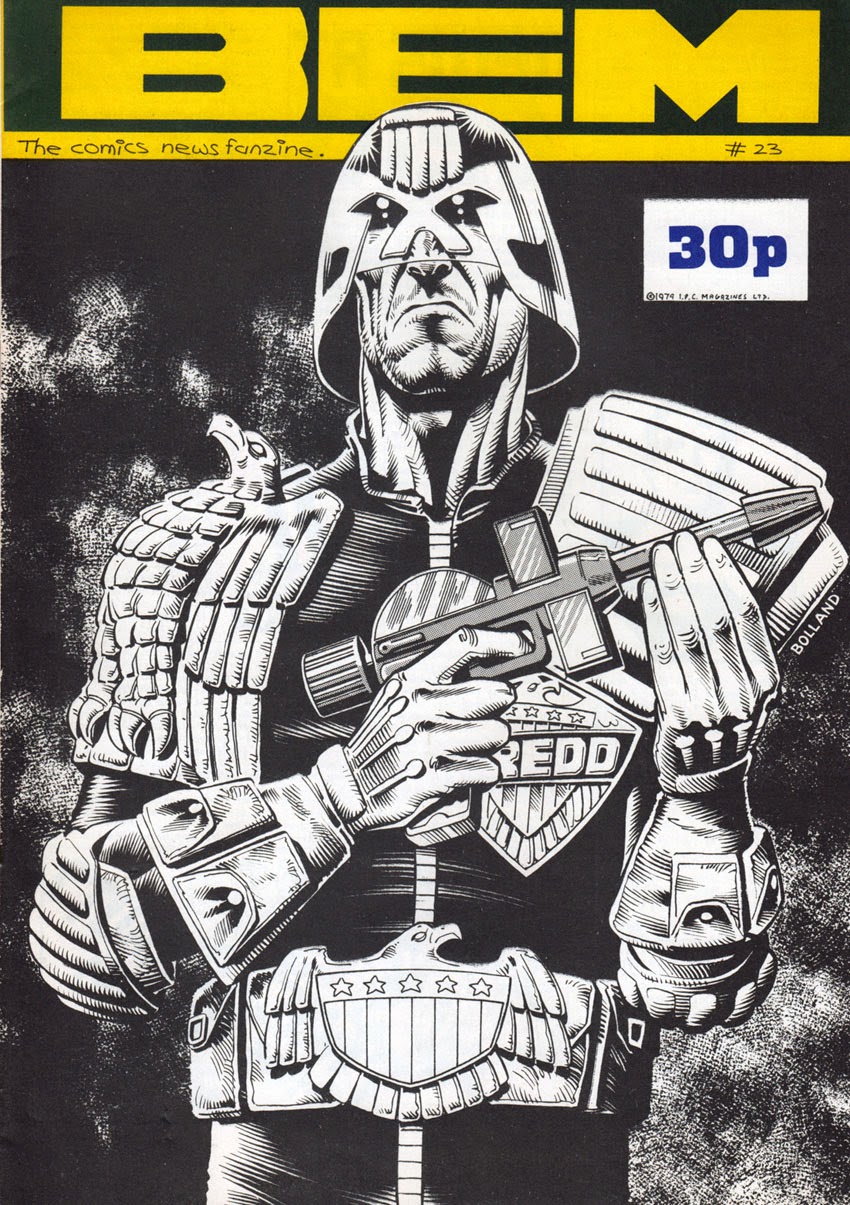 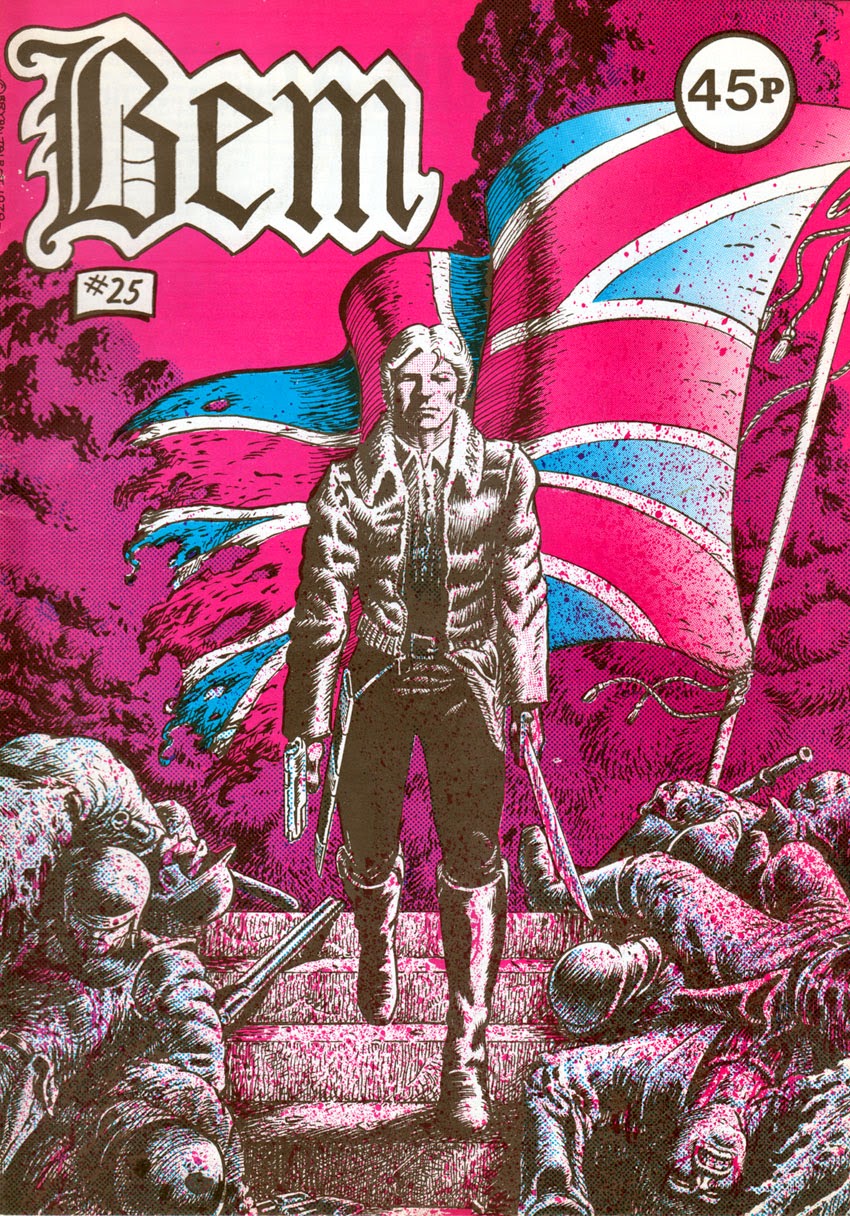 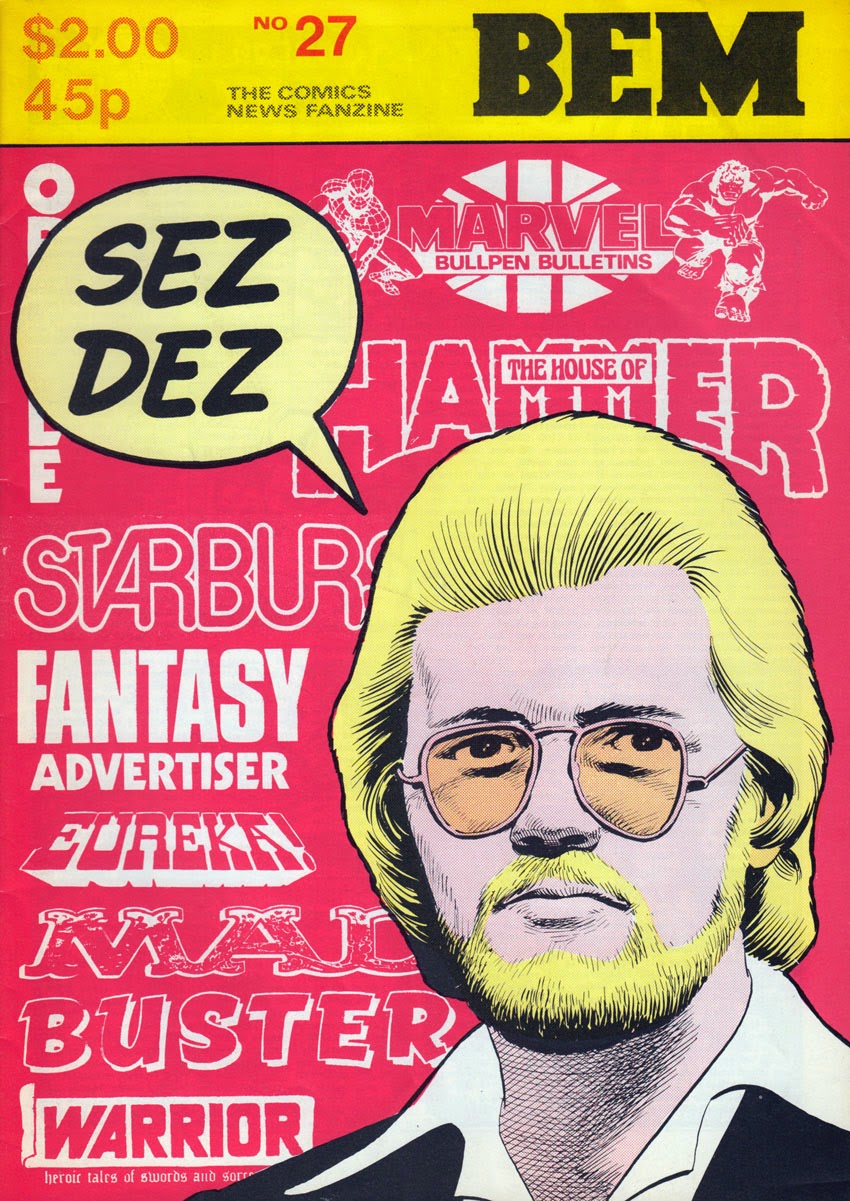 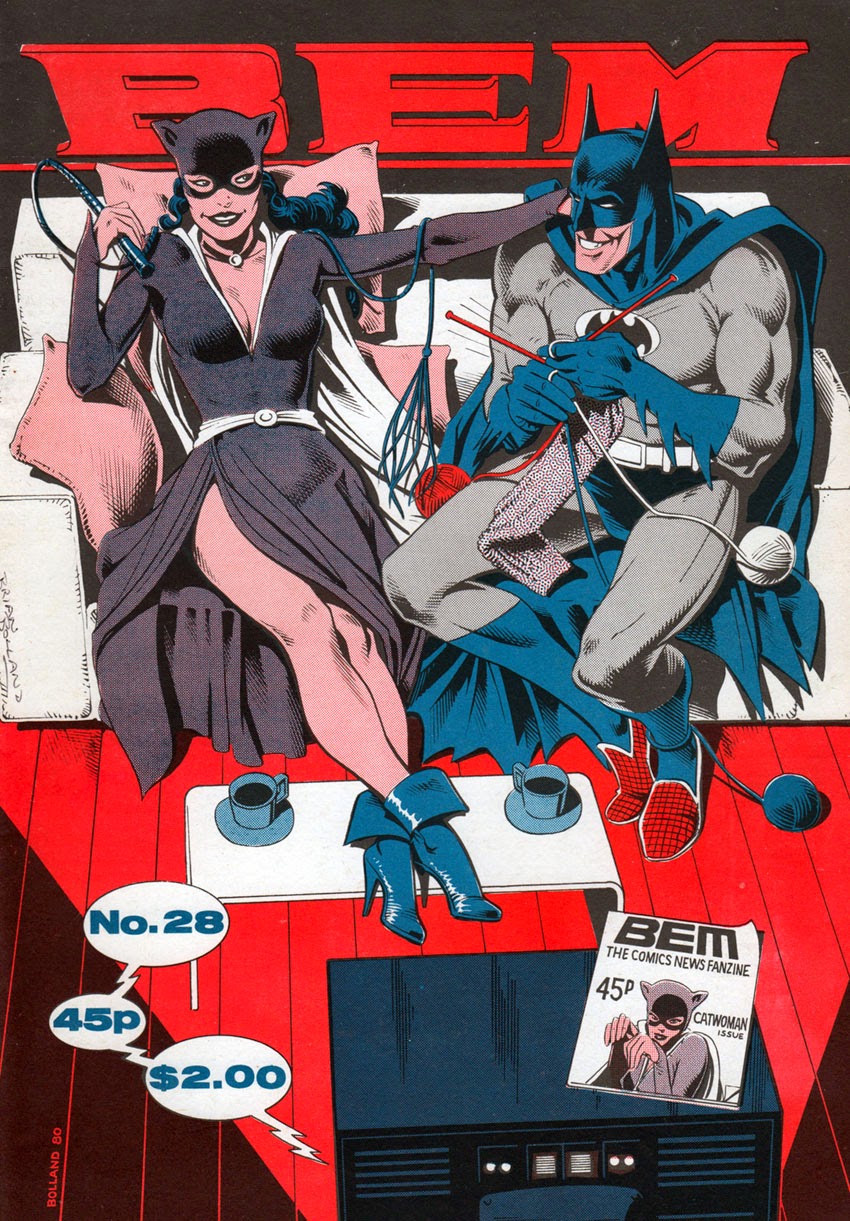 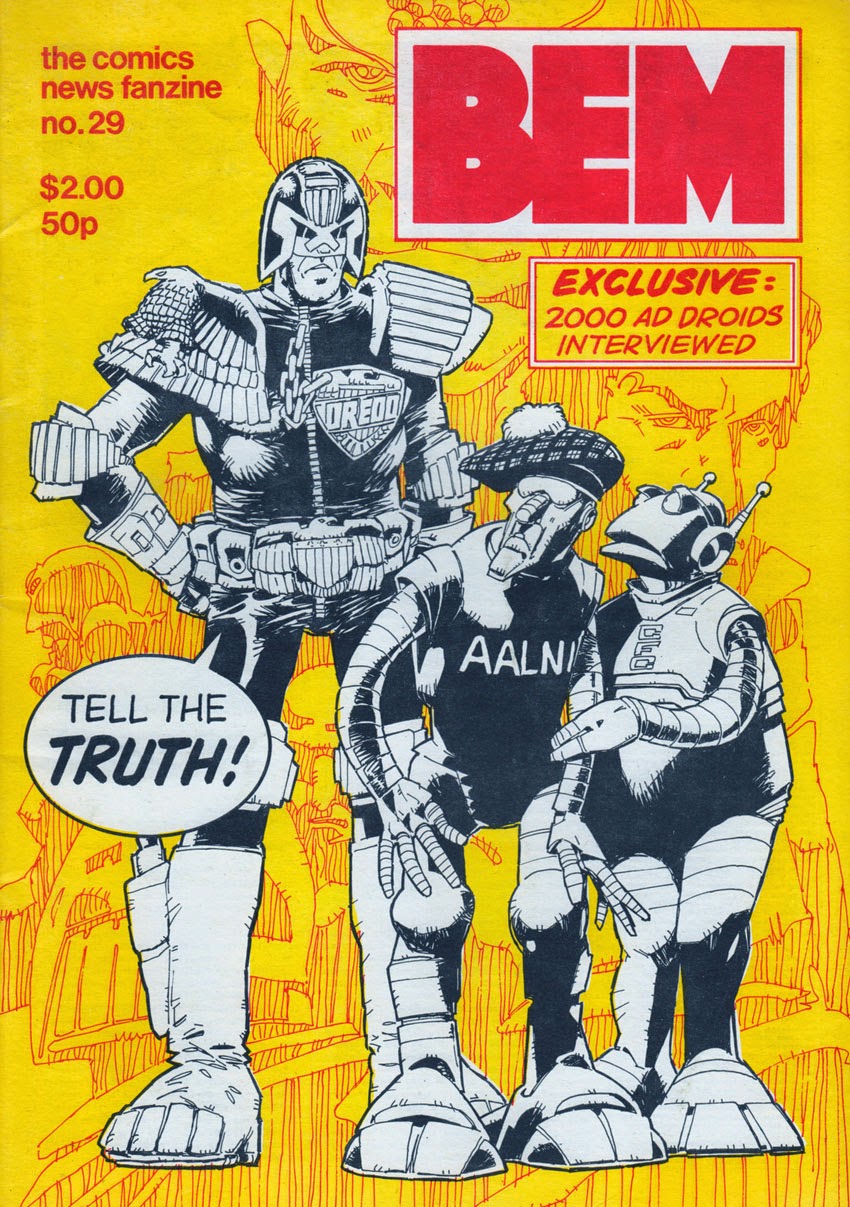 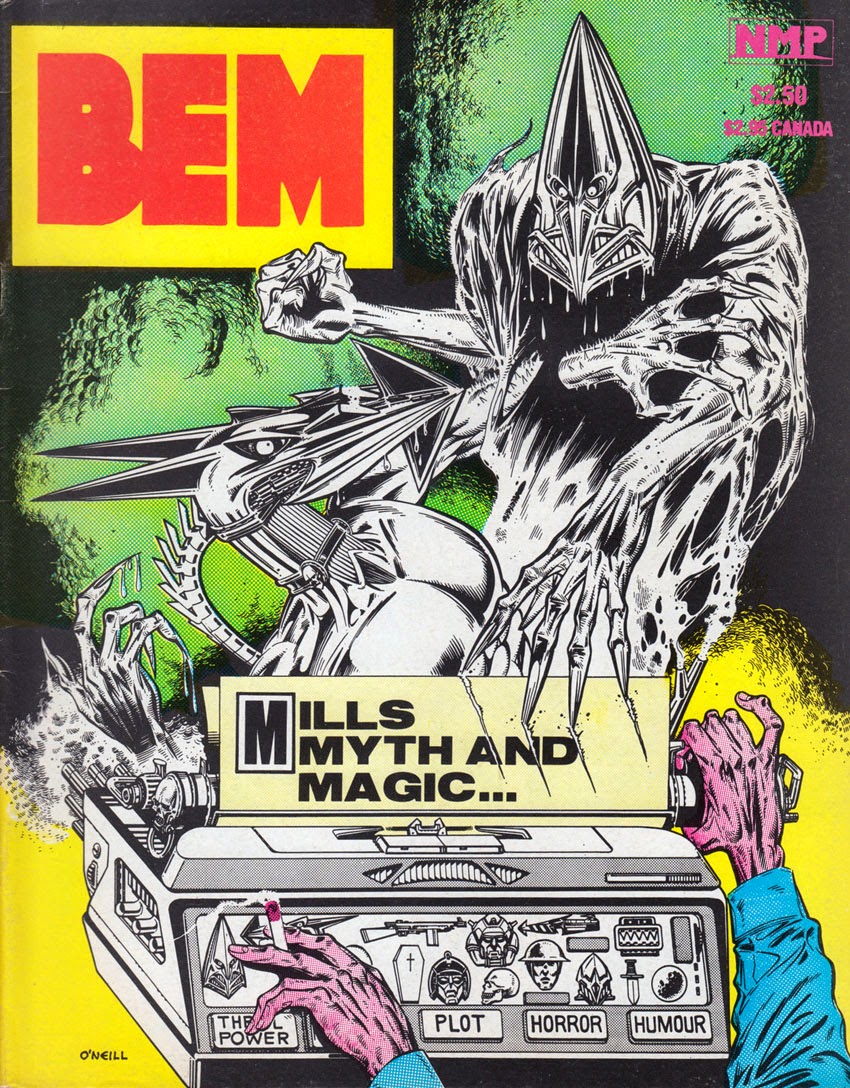 Masters of Infinity was a smart fanzine published my Mike Taylor. The cover to No.7 (1980) was by Mick McMahon... 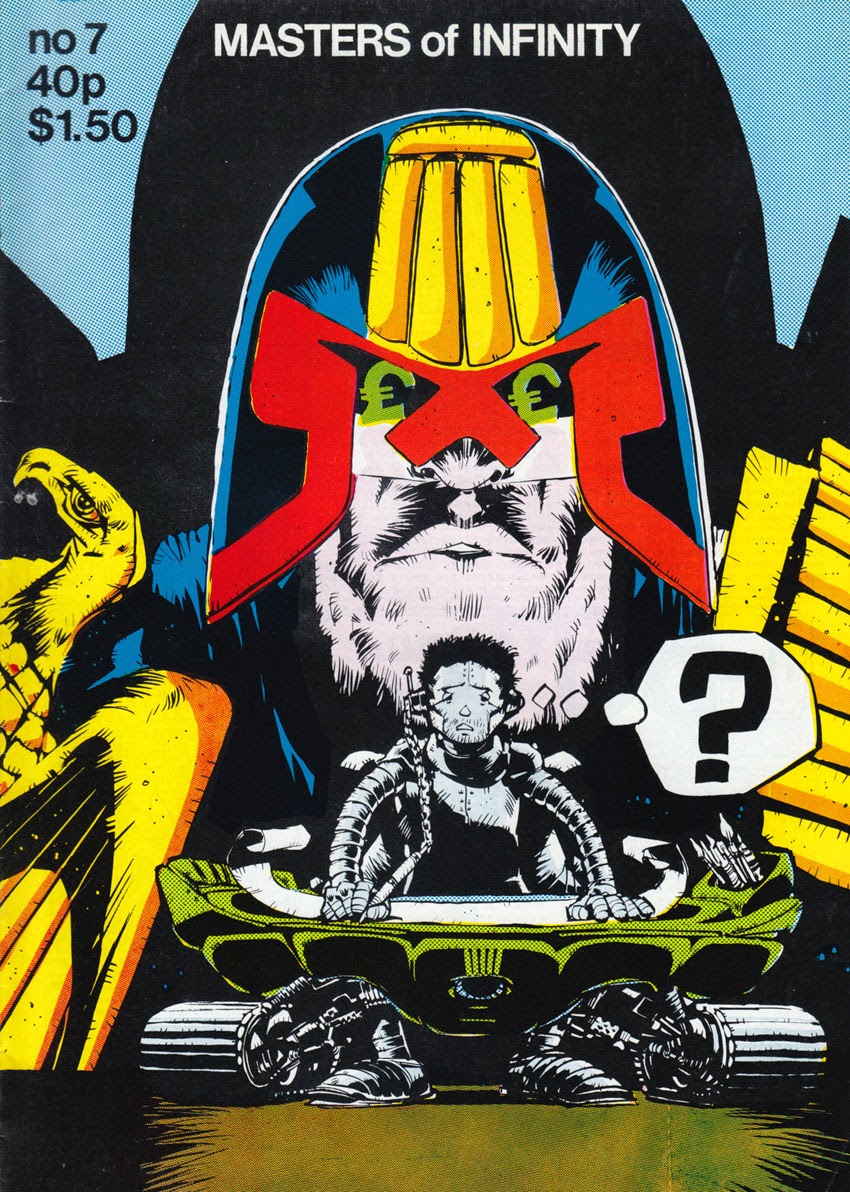 Workin Klass Super Hero was an A4 stripzine published by Jolly Martian Productions. This is issue 1 from 1979. Its cover (and some content) was by Glenn Fabry... 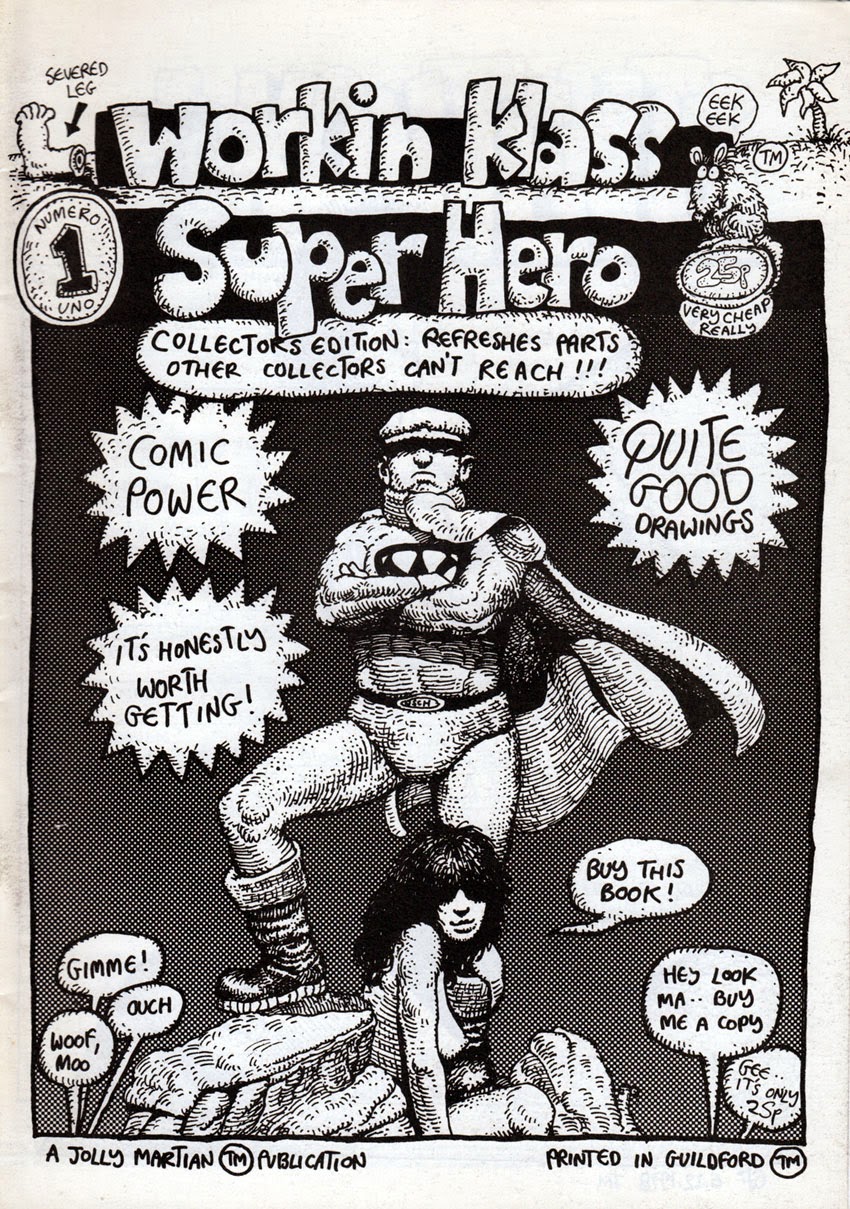 Fusion was an A5 fanzine edited by Hugh Campbell. The cover to No.6 (June 1985) was drawn by Grant Morrison, better known today for his writing of course... 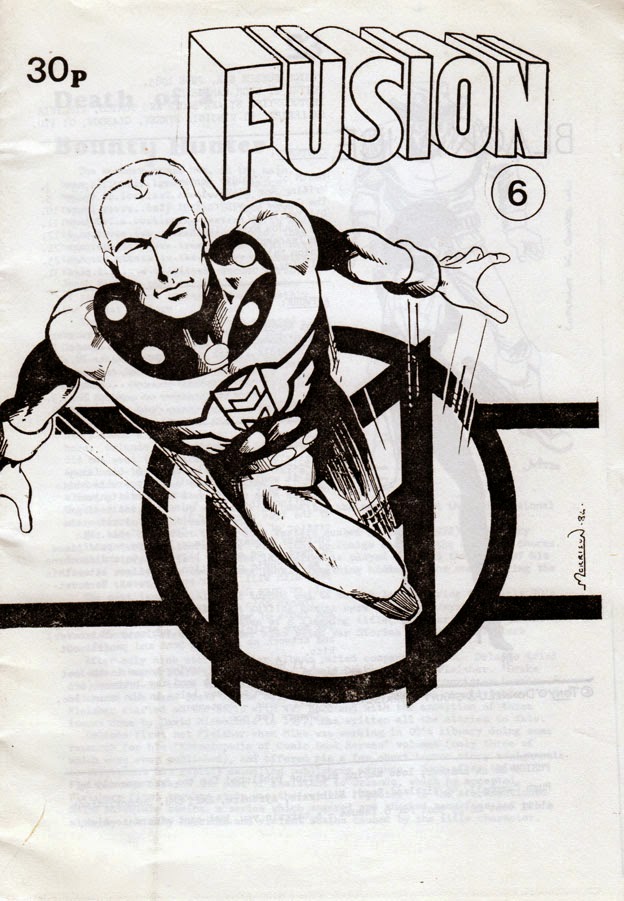 Last but not least, we'll end as we began with a Bryan Talbot cover. This one for Short Fuse No.2 (1985) published by Graham Cousins, Paul Duncan and John Jackson. 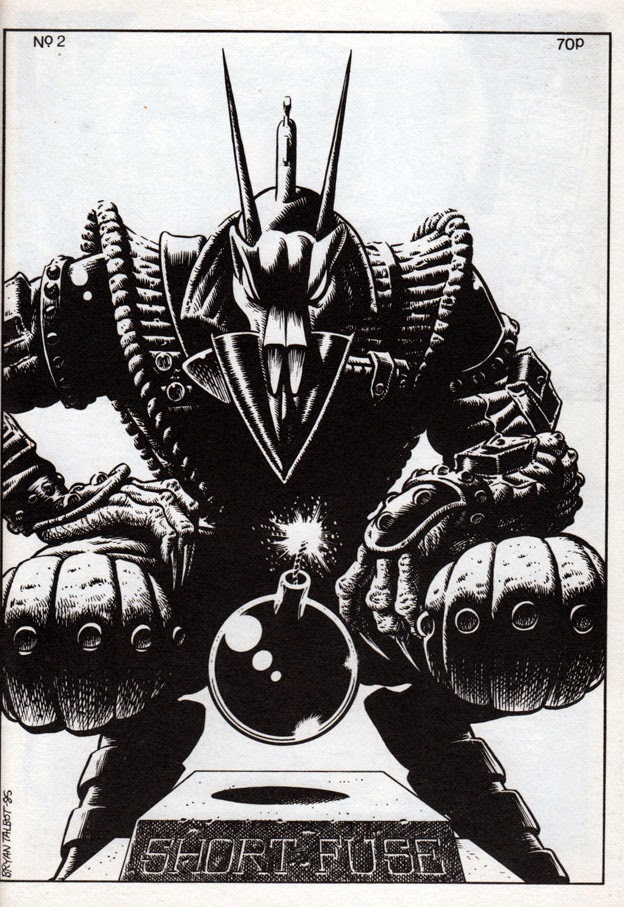 I hope these covers have been of interest. I'll post more info about these old fanzines at a later date if enough of you are interested. For example, over on my other blog I've posted the first article I had published from 1979. You can see it here:
http://lewstringercomics.blogspot.co.uk/2015/02/the-folly-of-youth-my-first-fanzine.html

Blimey! blog is taking a break for a few days now, unless important news comes along, as I have a lot of work on this week. Please keep posting your comments though as I'll still be taking a few minutes to reply to those.
Posted by Lew Stringer at 01:14

Great to see these old fanzines revived. i've still got most of them knocking about , especially the ones i contributed artwork or letter to.It's hard to believe how long ago all of that was....

Yes, sometimes it still seems recent but other times it really does feel like another era. Happy days.

Beautiful gallery, Lew. I'm seeing these for the first time, as the only comic 'zines I bought were ( incomplete ) listings of comic titles. Still enjoyed them though.
Well, "enjoy" your break, Lew,
And paddy, - brilliant post by you on the 'zines, too!

Fanzines were good for community spirit, John. I still see quite a few people I first met in those days. Much as I like social media I wish the paper 'zines were still around. I suppose the closest thing surviving are American professional mags like Alter Ego and Back Issue. On the other hand, stripzines (or small press comics as they're now called) have really increased in number in recent times.

It was seeing a teeny monochrome photo of fanzine covers in "World of Horror" that got me buying Comic Media News and Fantasy Advertiser, so enjoyed seeing this full colour review. As far as paper zines go, do you know Cygnus Alpha has been revived? http://cygnusalpha.co.uk/files/cax14_final.pdf

I didn't know, although I have to confess I never bought Doctor Who fanzines. Thanks for the link.

Thanks for digging these out Lew. A few I have never seen before, the Hunt Emerson one is the standout. Grant can draw a bit too, even if he is channelling Alan Davis. Id love to see more if and when you have the time!

This post has had nearly 300 views but only a handful of comments but hopefully people would like to see more. I'll dig out some more bits and bobs soon.

Why do so few people comment on blogs ? It's a mystery.

Good question Colin. I think it's partly because subscribers read the posts as an email so there's no way of commenting unless they go to the blog. That might also explain why some ask me to 'make the images bigger' (if they're only seeing posts on their phones) and why I often remind readers to click on the images to enlarge them.

I know at least a couple of people thought I still had 'anonymous' settings disabled and as they don't have Google, Word, etc accounts they thought they couldn't post comments.

But generally I think people are just happy to read blogs without commenting, just as they read magazines without sending in comments.

I read quiet a few on my phone, so I'm not going to leave a comment squinting at the teeny buttons! Blogs need a 'like' button, even just to show appreciation of the effort of the author.

Firstly, Lew, count me in for more posts on 'zines!
Secondly, that point you made about subscribers only viewing the posts in their emails, - well I subscribe to a few which I can't follow on blogger and whenever I open any of those mails, it only takes one tiny click or tap (if you're on the mobile) to be taken instantly to the post.
What I would say though, is it took me about a year or two of reading your blog, before I realised the simplicity of getting in touch, otherwise I would have had loads to say.As an old-timers, the internet was all new to me. So perhaps many readers haven't quite sussed it out yet?
Hey, I used to try and subscribe to your blog by various ways and nothing ever happened!
:-D

I wonder why the subscription to the blog didn't work John? Thanks for letting me know.

Brilliant to see these again. Reading your (and Dez Skinn's), Blog entries on fanzines recently, has resulted in a mad chase to repurchase 'zines I loved (and lost) years ago.
Ebay is loving me at the moment, my pocket slightly less.

I still have a fair few but I got rid of a lot several years ago as they were just taking up too much space. Good luck hunting them down!

Great blog Mr Stringer. The Fabry cover is the earliest example of his work I've seen- at the age of 18 he was obviously influenced by Robert Crumb.

Thanks, David. Yes, I think it was his first published work.

Because I don't own the copyright to publish the whole magazine online.

but this magazine still copyright??

Yes, copyright lasts until 70 years after the death of the creator... and the publisher/editor is still alive and well so you have a long wait. Look out for the issue on eBay and buy it like I did.

sad I poor man! I live in ARGENTINA and now that magazine(or others items) so expensive!!!thank you anyway!! ;(