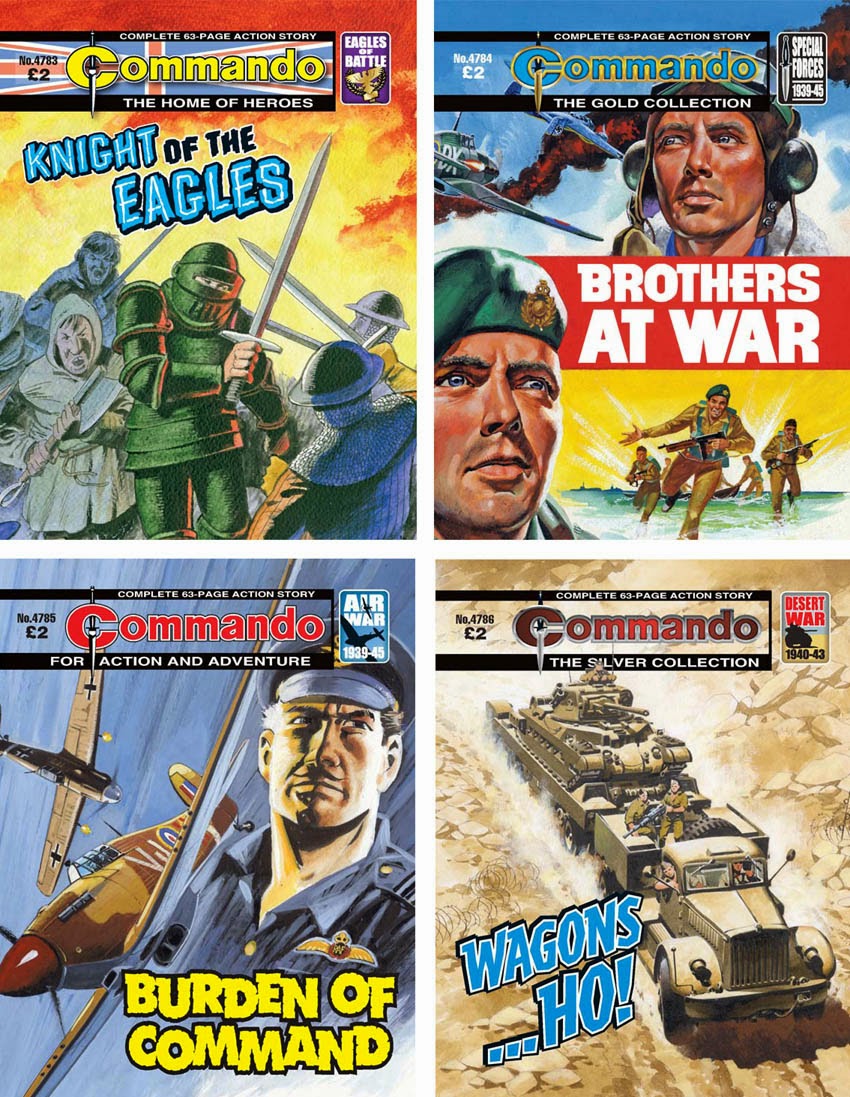 My thanks to DC Thomson for the info and images of the forthcoming Commando comics that will be out this week. Here we go...
Commando 4783-4786 – On Sale 12th February 2015

Commando No 4783 – Knight Of The Eagles
England, 1405 AD. Peasants in Somerset wanted rid of the Allinghams, their feudal overlords. The Allinghams’ men were as brutal and cruel as their masters. Taxes were high and collected without mercy.
Salvation seemed to come in the shape of Mortimer Allingham — the cunning son of the clan who has been disowned by his father. He planned to turn one of the locals, John Carrick, into the “Green Knight” — a figure from local myth — and lead a rebellion. Many of the locals, though, wondered if any of them would survive the explosive consequences of his scheme.

With only a few notable exceptions — step forward the Convict Commandos — recurring characters have been rare on the pages of Commando over the last 50-odd years. However we were of the opinion that you, our readers, might like a series which carried the story over more than one issue. With the pen of Ferg Handley recruited to do the writing, we decided that a historical saga spanning many generations would hit the spot.
So, here is the fifth episode of the series following the inter-linked fates of several families from the South West of these isles. By the late 1300s, the days of the Roman invasion are far behind them and the peasants are now revolting.
I hope you enjoy this story and the journey to come.

Commando No 4784 – Brothers At War
Meet Clive Rushden, brilliant Hurricane pilot.
Meet Mark Rushden, young Commando officer.
They were brothers, but put them in the same room and they’d be at each other’s throats.
What a pair to choose for one of the most daring missions ever conceived — and behind enemy lines.

Ken Barr’s cover sets the scene for a battle royal between two very similar-looking characters (Richard Todd anyone?) because, while they look alike, there is no other similarity between the pair of main players. Brunt’s story sets them against each other in nature and arm of service then adds a little slice of action to separate them even further. The whole plot is very neatly played, focussing of fears and distrust to add more and more spice.
All it needed was a good artist to finish it…and Commando editor Chick Checkley found the very man in Gordon Livingstone. His strong black-and-white work perfectly mirrors the black and white opinions of the brothers.
Family ties were never so strained.

Commando No 4785 – Burden Of Command
The accepted wisdom is that to command a group of fighting men, a leader needs to inspire. Sometimes he needs to inspire confidence, sometimes loyalty…and sometimes fear. Flight Lieutenant Garry Fraser didn’t really agree with the accepted wisdom; he was one of the lads and in his mind that’s how things would stay when he was promoted.
Then his chance came and Garry had to deal with…
The Burden of Command

Commando No 4786 – Wagons…Ho!
There was only one thing that Sergeant Jack Brett and his Matilda tank crew hated as much as the Germans, and that was a certain tank transporter crew from the Royal Army Service Corps. When they weren’t fighting the one, they were fighting the other. And so, when all three met on the Egyptian desert, it meant trouble.
But the handful of British soldiers had a big, big problem — they had to stop the advance of a huge German column…with their single damaged Matilda and that one tank transporter!

This story encapsulates many of Commando’s core values. Foremost, there are a set of memorable characters most of whom clash, creating conflict and drama.
In addition, we have a rollicking desert war adventure, featuring an impressive array of military hardware — from trusty Matilda tanks to lumbering, American-made Diamond T transporters, heavy duty RASC lorries and trucks, not to mention zippy German armoured cars.
So…let’s get ready to rumble!