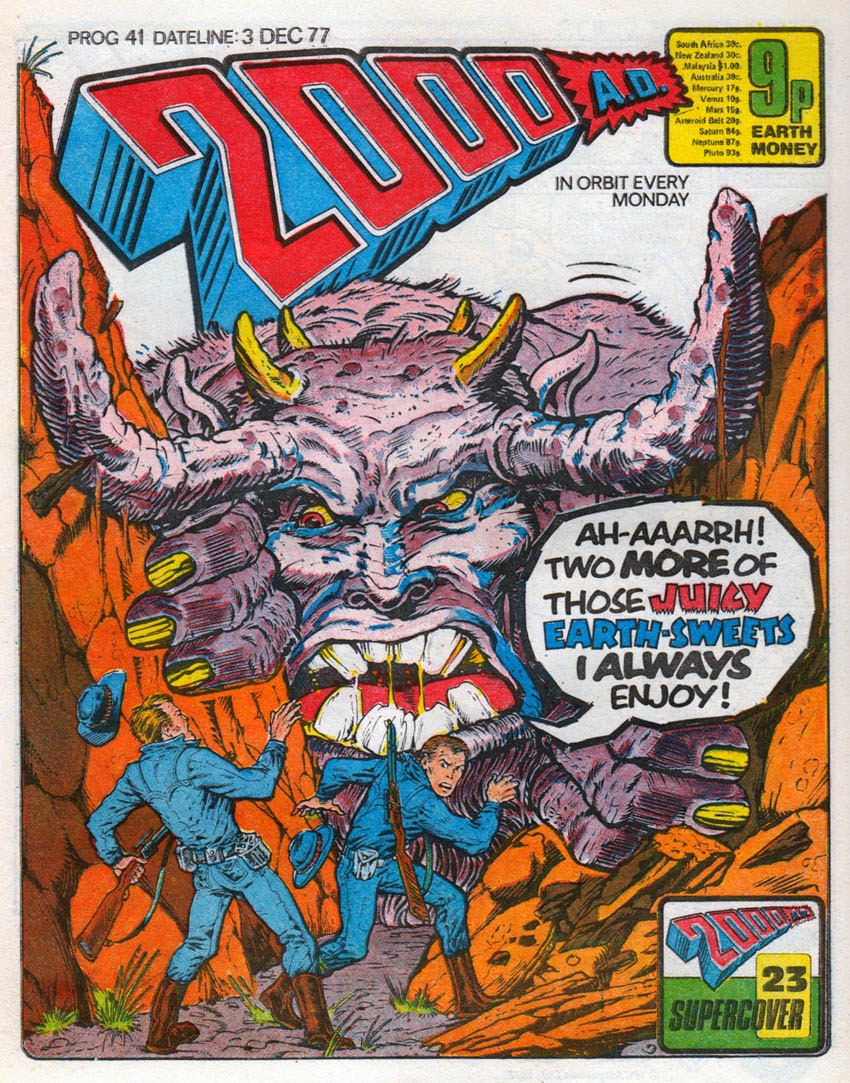 Very sad news. 2000AD have just reported the passing of artist Brett Ewins. A distinctive comic artist since his work first appeared in print in the 1970s, Brett's work was appreciated by fans and pros alike.

(Updated 18/2/2015): Brett Ewins was born in London on December 8th 1955. As a child he was enthralled by the work of Steve Ditko and Carmine Infantino which inspired his desire to create his own comics. In 1977 he teamed up with his longtime friend and fellow artist Brendan McCarthy to create the distinctive indie comic Sometime Stories. Sadly, after a fall out with the publisher, the second issue was never published but it led to both artists getting work for IPC on 2000AD.

Brett Ewins' modern style was perfect for 2000AD and he collaborated with McCarthy on several covers and strips in the comic's formative first year. He soon went solo too, with his first cover being the one for Prog 41 (shown above).

With McCarthy pencilling and Ewins inking, the pair contributed chapters to the Judge Dredd epic The Day the Law Died. However, Brett also pencilled and inked his own material at times, such as in Prog 113 to 115 when he illustrated the three part Dredd story The DNA Man. Here's part 3 of that story. Script by John Wagner, art by Brett Ewins, from 2000AD Prog 115 (2nd June 1979). Click to enlarge images... 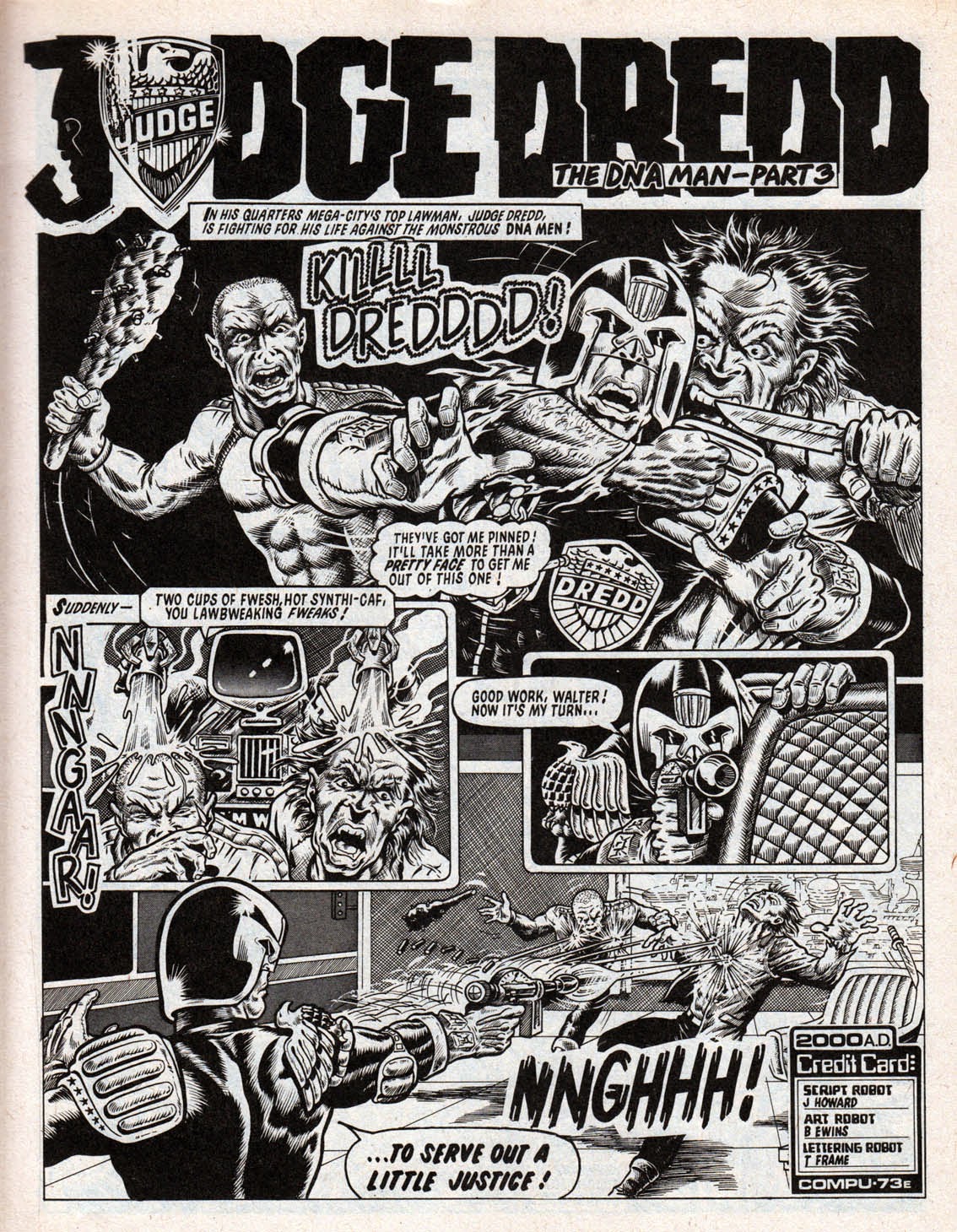 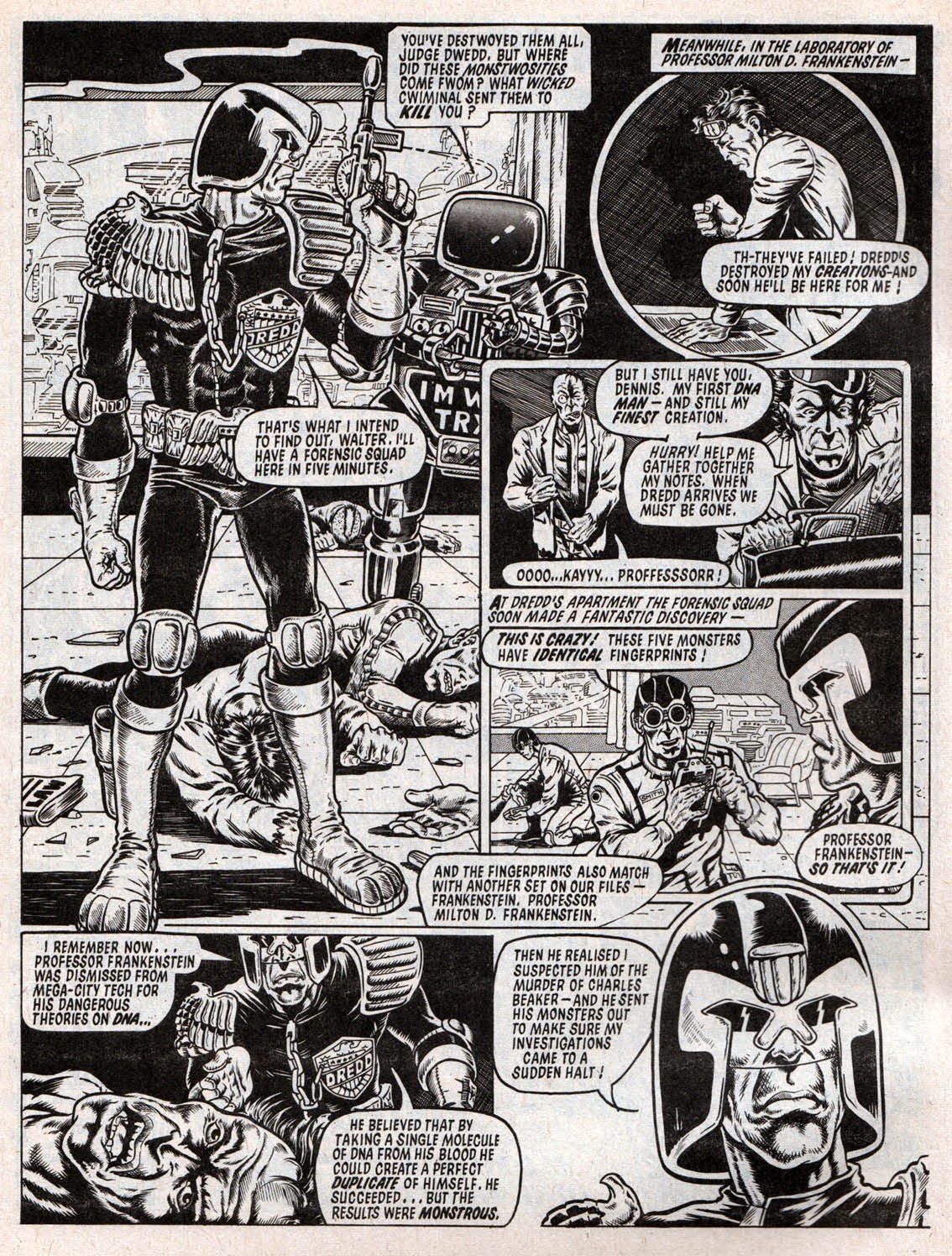 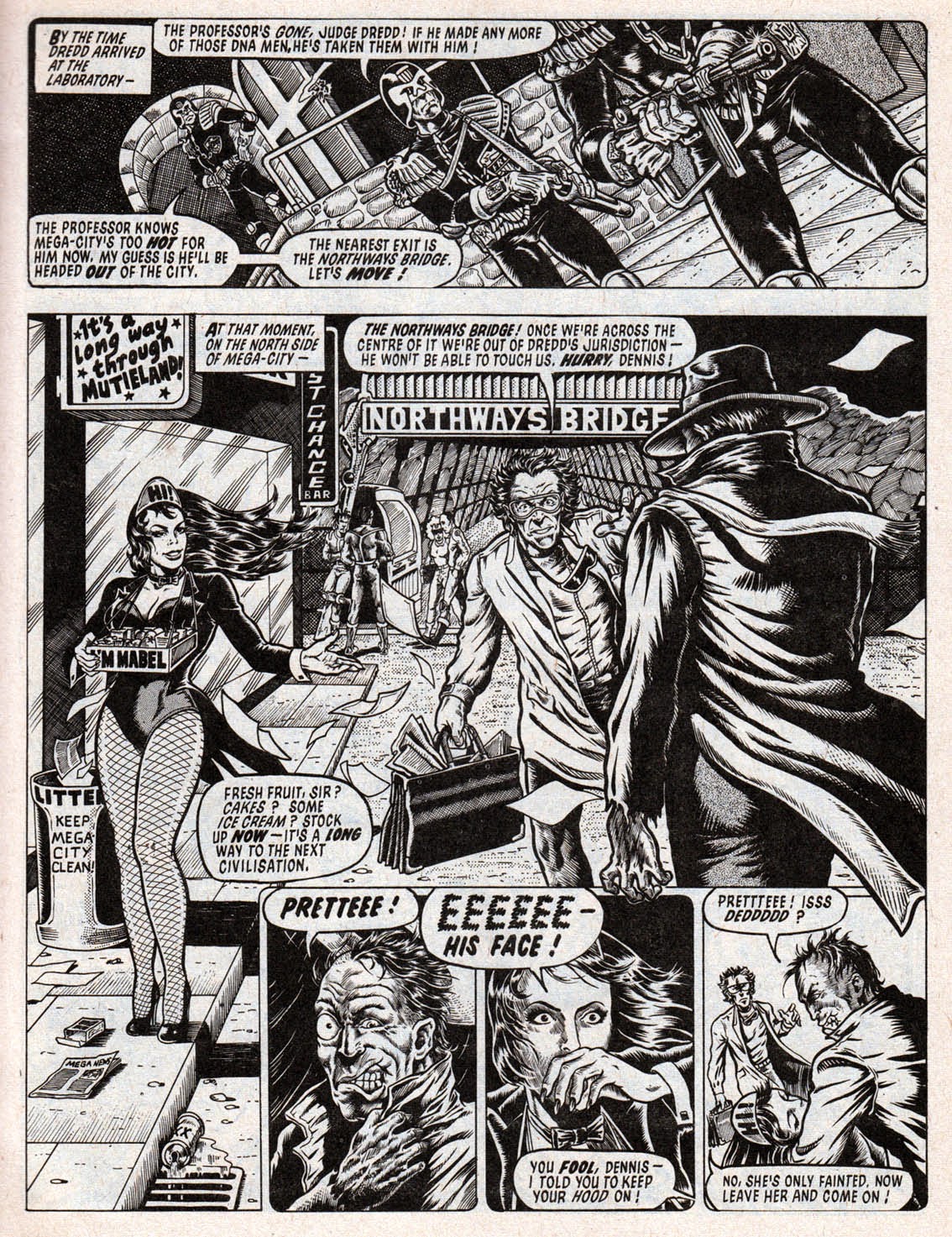 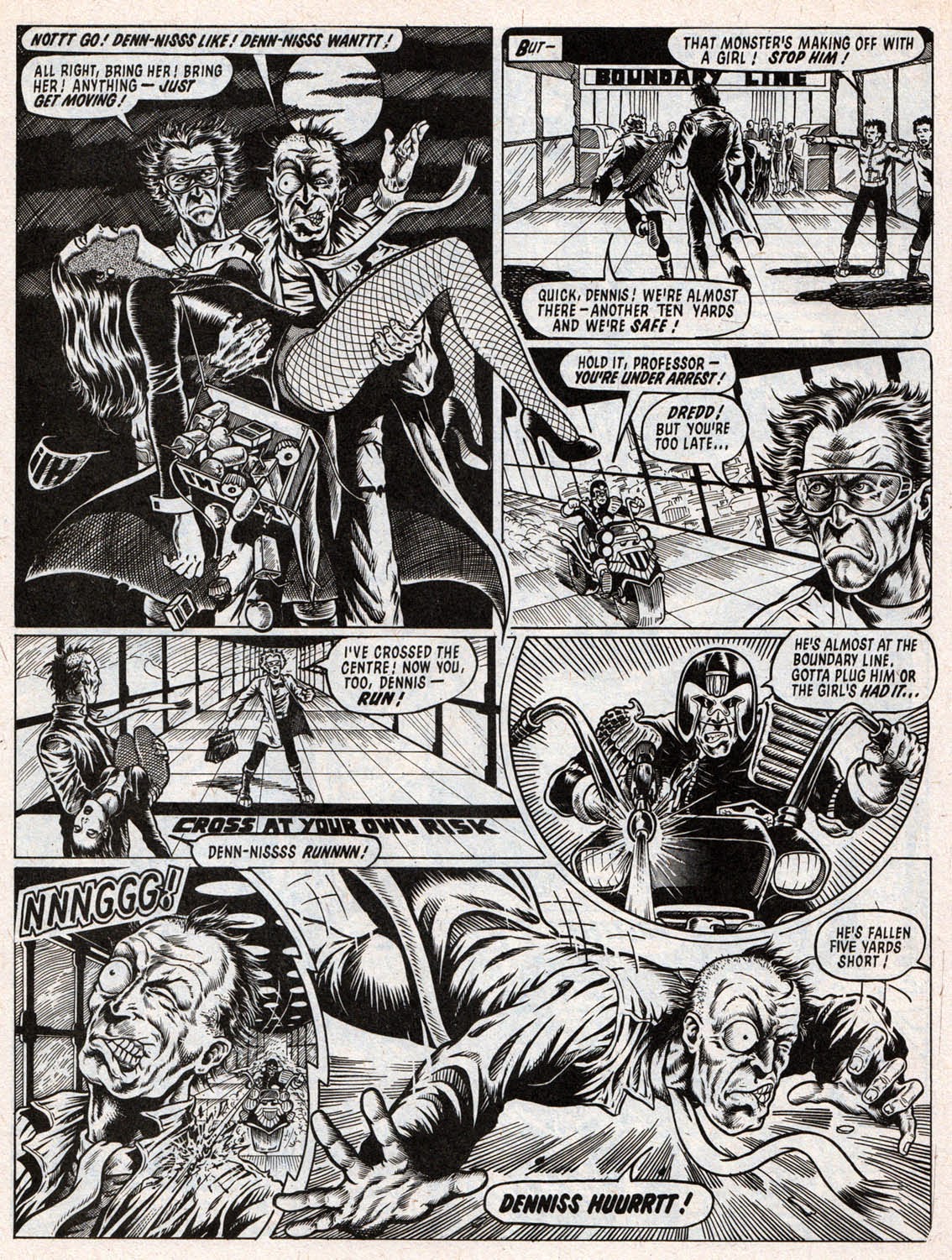 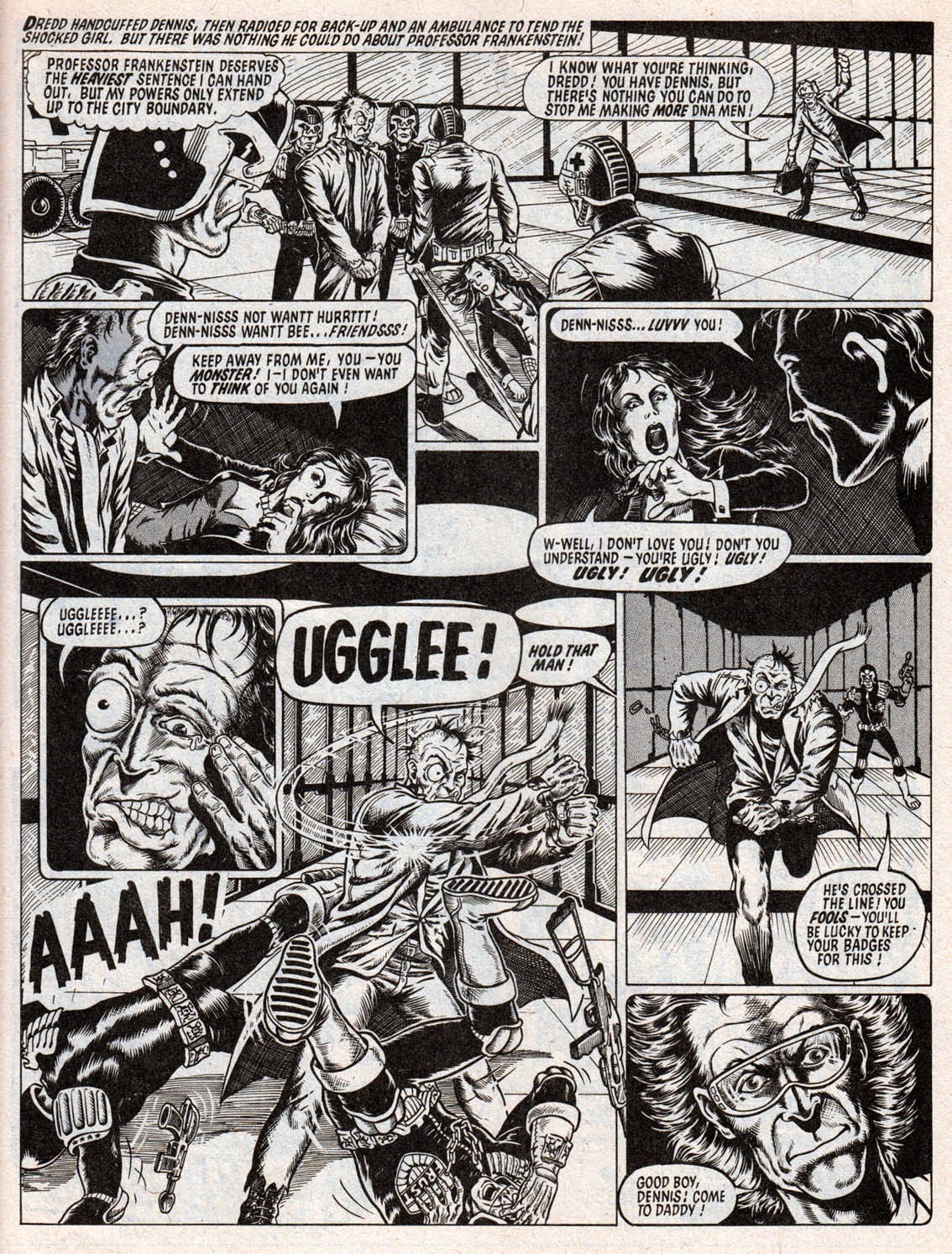 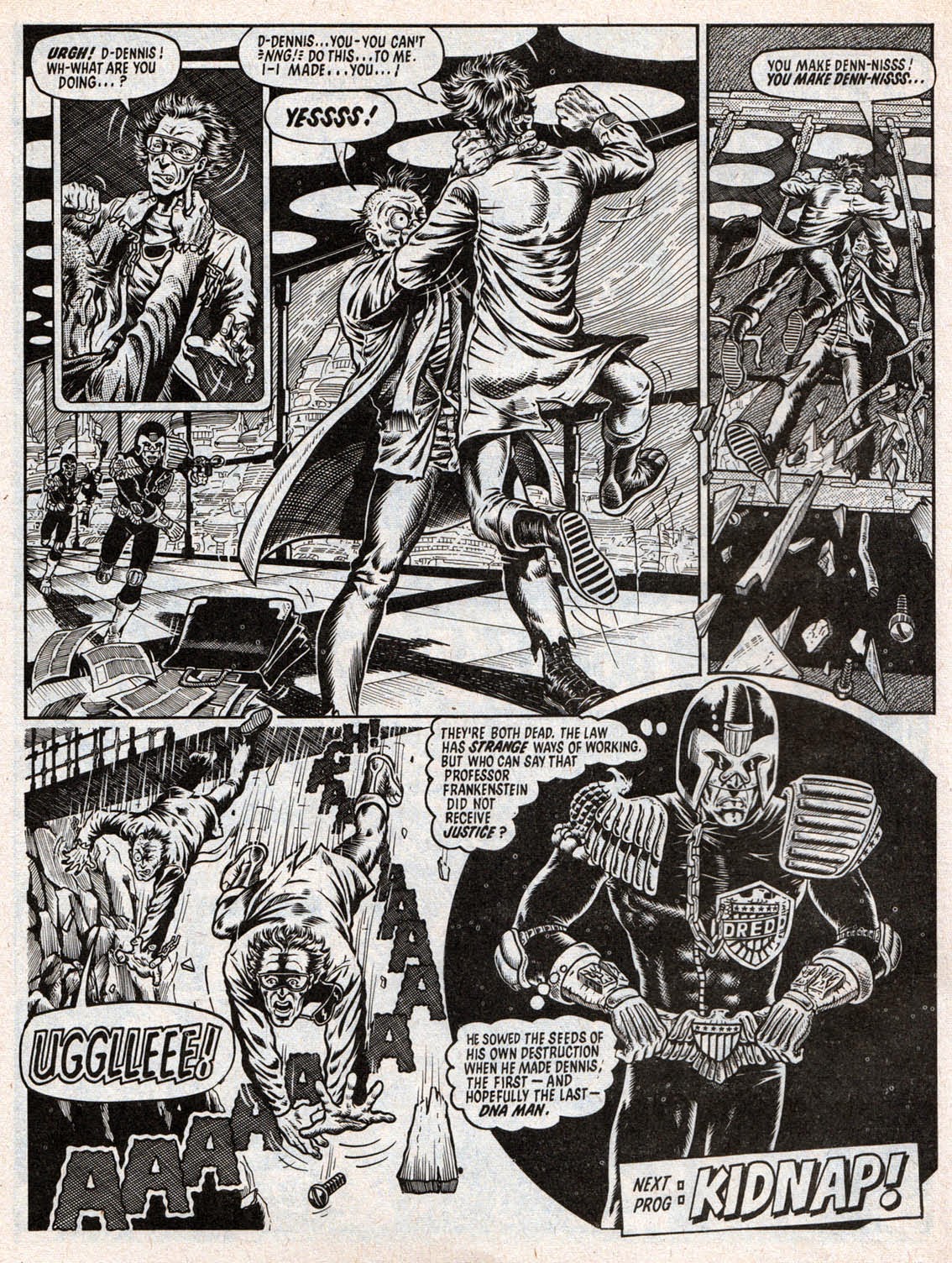 Over time, Brett's work continued to evolve, as evidenced on strips such as Johnny Nemo for Eclipse and Bad Company for 2000AD. The artist himself had his own ideas for comics, co-creating Deadline magazine with Steve Dillon in 1988, and discovering Jamie Hewlett and Philip Bond (whose Tank Girl strip became phenomenal success). 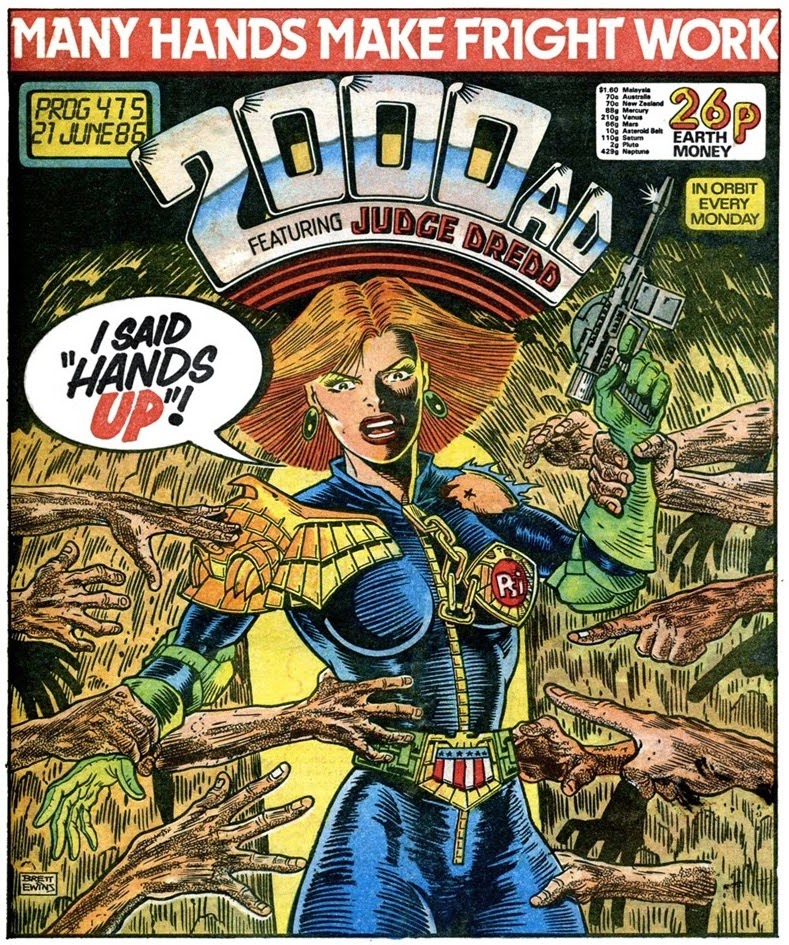 Sadly all of this work was not without consequences and in 1991 Brett suffered a nervous breakdown. Diagnosed as a manic depressive his illness would continue to affect his life and career. In 2011 the book The Art of Brett Ewins was published, which is essentially Brett's biography (in the form of an interview by Alan McKenzie) and in it the artist spoke of his plans for the future. Due to prescribed heavy medication he was only able to work for around two hours a day but he seemed optimistic if his words in the book were anything to go by. Unfortunately tragedy struck in 2012 when his illness led to a violent encounter with the police which resulted in him receiving hospitalization. In recent times he was hoping to rebuild his life but on 16th February 2015 Brett passed away after a short illness.

A short tribute such as this cannot really do justice to the life of such a talented and tragic figure. I didn't really know Brett. We'd met very briefly a couple of times in the 1980s at conventions but that's all. I always admired his distinctive talents though and a new Brett Ewins project was always worth a look. To die at 59 is no age, and one cannot help but wonder what great work he could have continued to do had he been blessed with a happier and longer life. 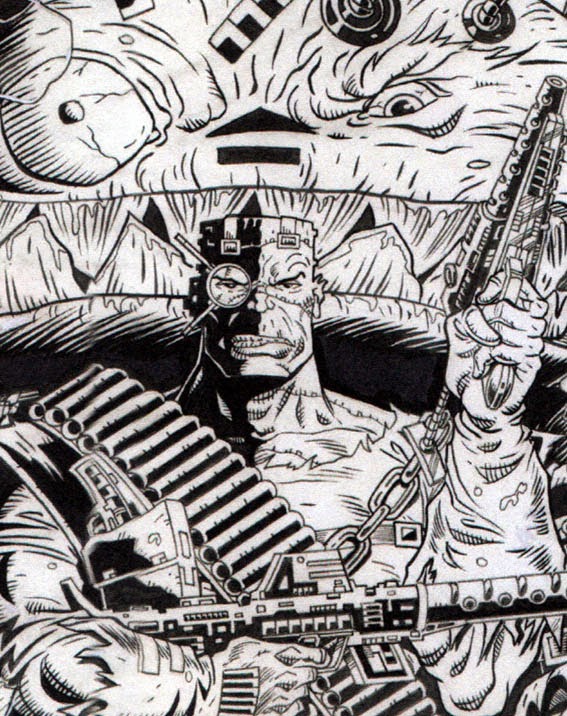 However, he leaves us with some classic comics material. If you don't already have it I thoroughly recommend The Art of Brett Ewins, which is Brett's personal journey through his life and career. It's well illustrated with examples of his artwork (some scanned from the original boards) and contains an index of all his work in the back. Available from Amazon:
http://www.amazon.co.uk/Art-Brett-Ewins/dp/095691490X/ref=sr_1_1?ie=UTF8&qid=1424300149&sr=8-1&keywords=art+of+brett+ewins 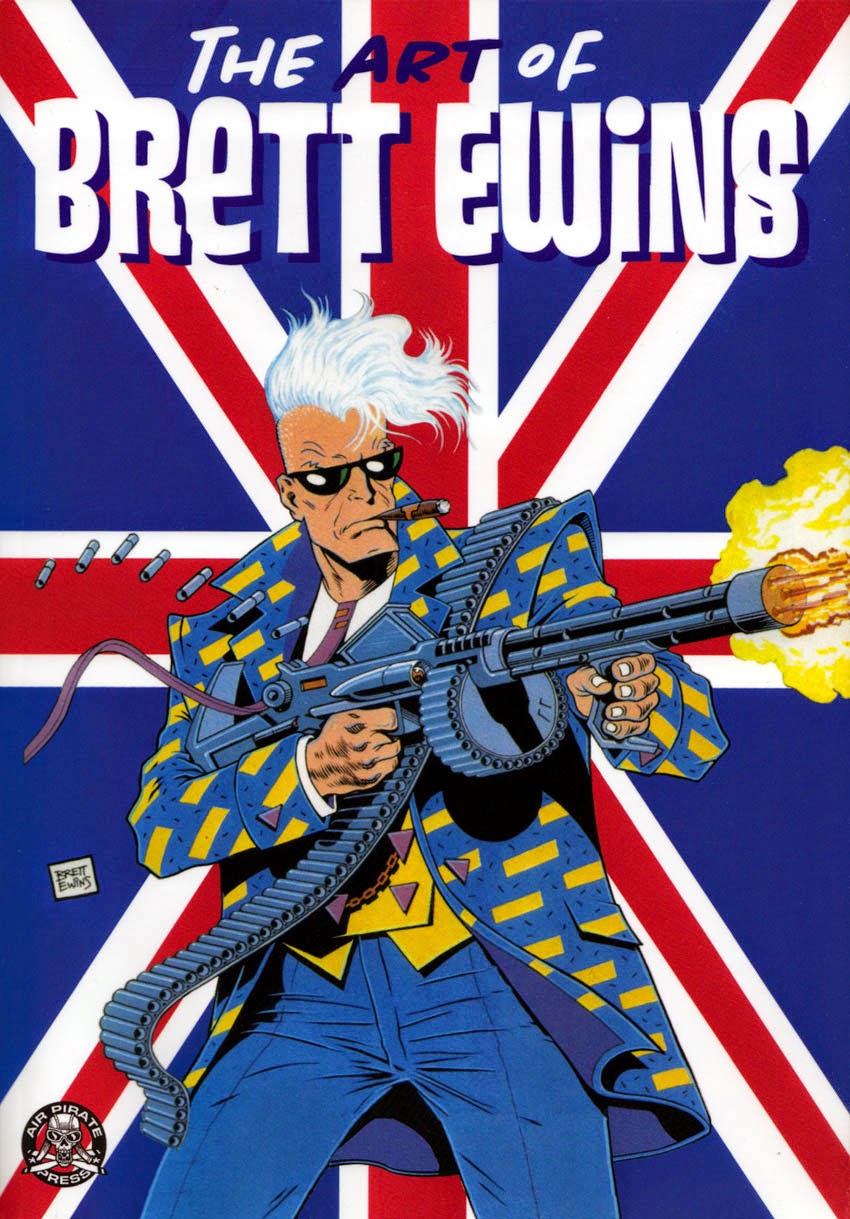 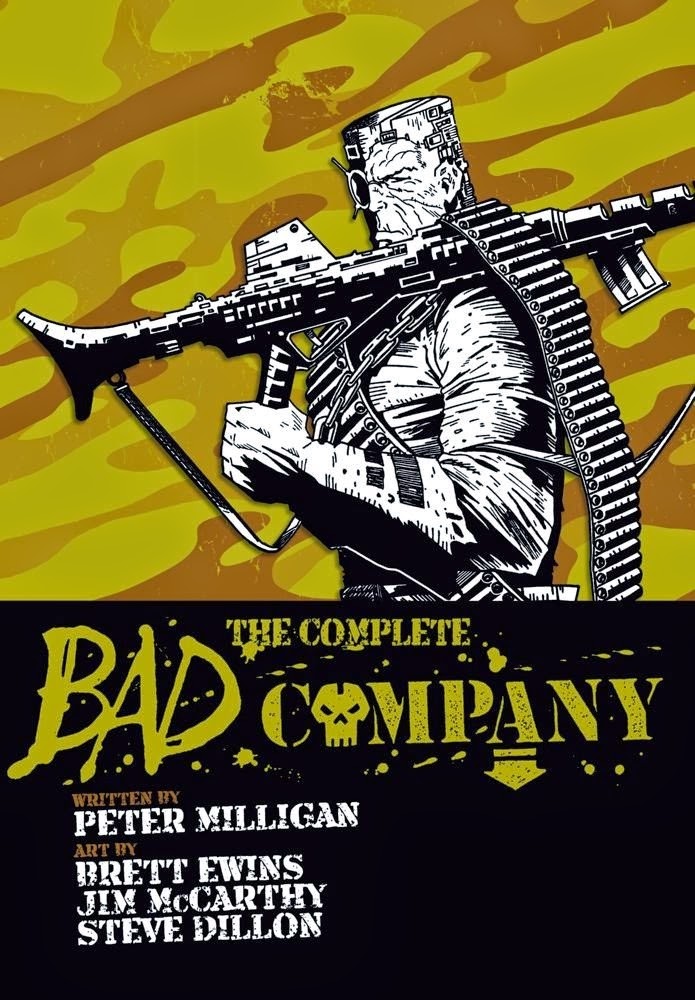 My sincere condolences to Brett's family and friends at this sad time.

(Image of Judge Anderson 2000AD cover taken from
http://alexronald68.blogspot.co.uk/ . Photograph of Brett is from The Art of Brett Ewins. Rest of the scans are from my own collection.)

I loved his work on Judge Anderson.

Very Sad indeed, He really came into his own when he started Dredd and Anderson. His Anderson I think is the definitive for me.
Bad Company and Skreemer are my favourites though. Skreemer is that odd thing, drawn with Steve Dillon, its sometimes hard to to tell who drew what, their very different styles gelled perfectly.

I knew he had experienced a lot of problems recently, but that was unexpected and very sad news indeed, he was a relatively young man as well. I loved his work especially "Bad Company" which I picked up recently and it still looks fresh and exciting. Condolences to Brett’s family and friends - a true UK comic book legend.

Yes, he'd just turned 59 in December so he died far too young. His style was perfect for 2000AD and Deadline too of course. I'll be updating this post sometime tomorrow with some classic examples of his work.

Sad news indeed , Lew.I'm only a couple of years older than him so it makes you focus .Life is really too short and flies by in a flash .Sad.

Oh no, what a shock! I didn't know he'd been ill. As everyone says, " the definitive Anderson ( I had that prog )
My condolences too to all the loved ones he leaves behind.
As you say, far too young.

I grew up with his 2000AD (and later, Deadline) work, and it was always vibrant, alive and unique.

Even as a kid I knew he was a phenomenal talent.

I hope he is free of his demons now.

Thank you for some fantastic memories, Brett. Your art will live on.

Nice tribute, Karlos. Thanks for posting.

Very sad news indeed as I well remember Mr Ewins early work in 2000AD but my favourite was always Bad Company. It was this strip that got me back into the comic after a long time away. I also loved his Johnny Nemo strip from Deadline (again with Pete Milligan) and I'm glad it has been reprinted in a new collection - sad times.

Thanks for commenting, Richard. I've just updated the post into a fuller tribute now, and giving Bad Company a plug.