The new Doctor Who Comic is here! 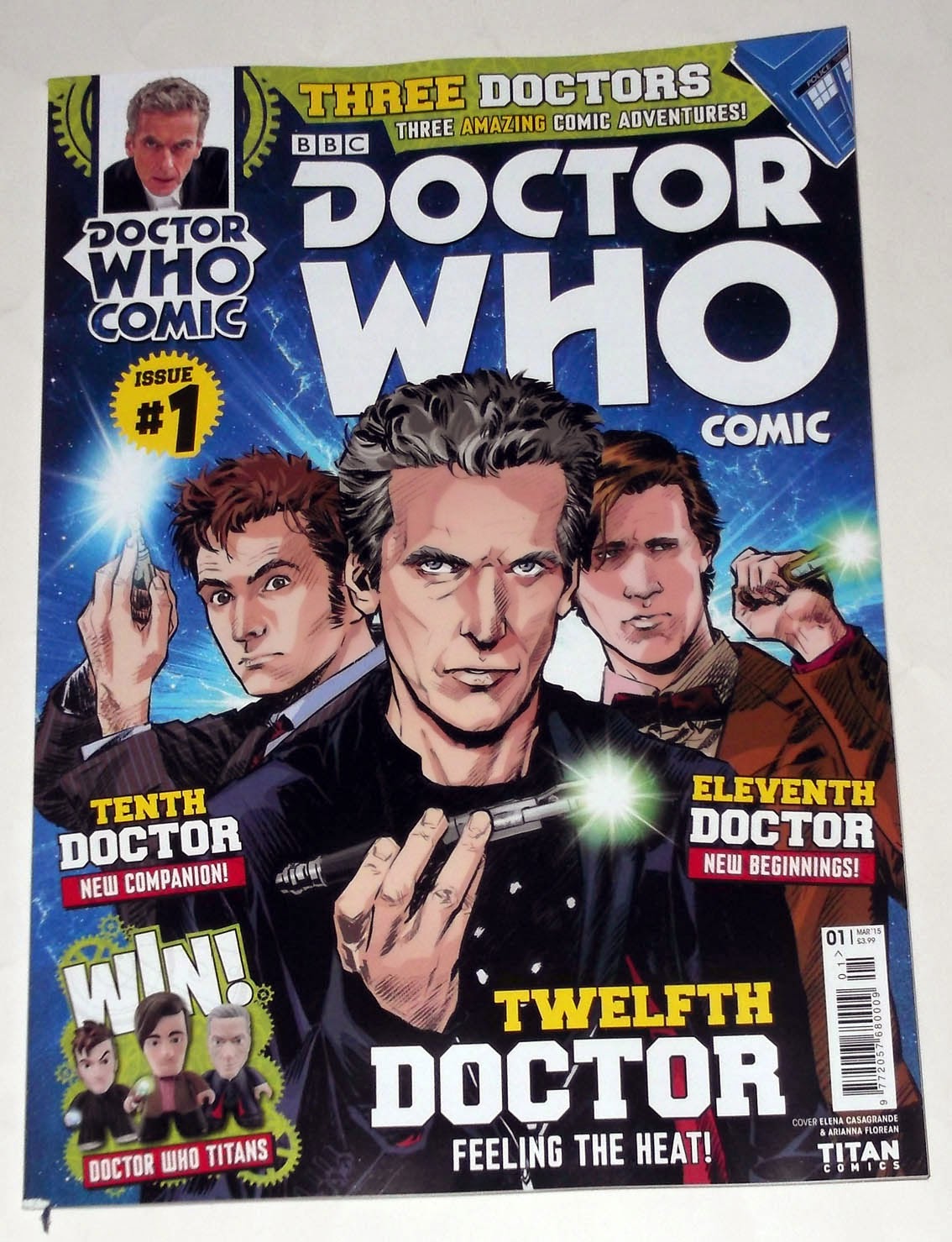 Today saw the launch of Titan's new Doctor Who Comic in UK newsagents (although so far I've only seen it in WH Smith). I was surprised to see that the format is A4, rather than the US format of the Titan and Panini comics. Also, Smiths are displaying it in the young children's comics section with The Beano, Dora the Explorer, Angry Birds Magazine etc rather than alongside Doctor Who Magazine, 2000AD, and the aforementioned other Titan and Panini comics. I can't help feeling its intended age group may pass it by as Doctor Who Comic is aimed at a more sophisticated reader than the juvenile titles it's sharing its shelves with but presumably Titan have good reasons for doing it. 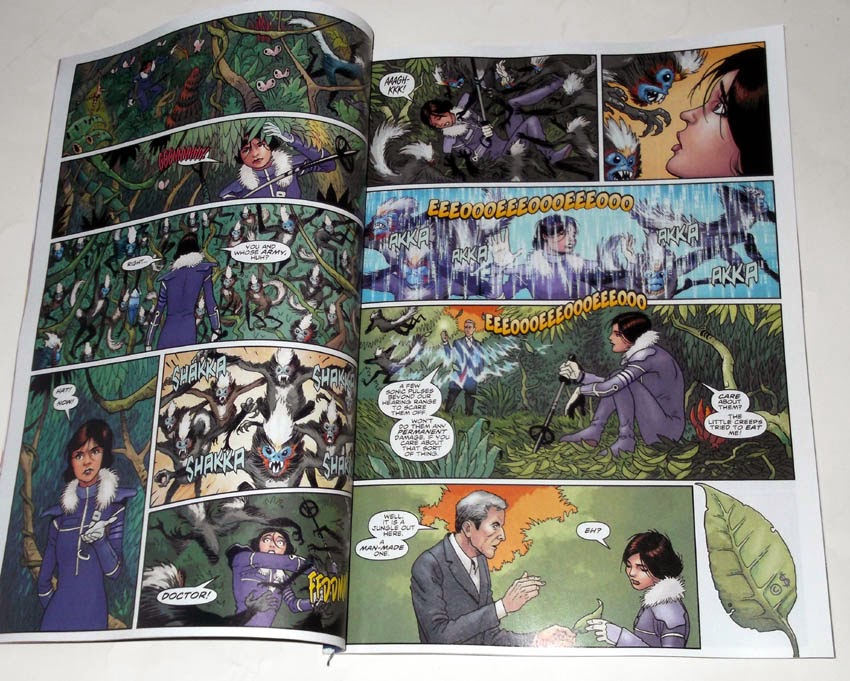 The comic itself is a squarebound 84 page publication with exactly the same paper quality that Titan's CLiNT comic had. The content repackages the first issues of the recent individual Doctor Who comics that are sold in specialist comic shops. So we get long episodes featuring the 12th Doctor by Robbie Morrison and Dave Taylor, the 11th Doctor by Al Ewing, Rob Williams and Simon Fraser, and the 10th Doctor by Nick Abadzis and Elena Casagrande. Excellent value for £3.99 considering each story would cost around £3.00 each in its original format. 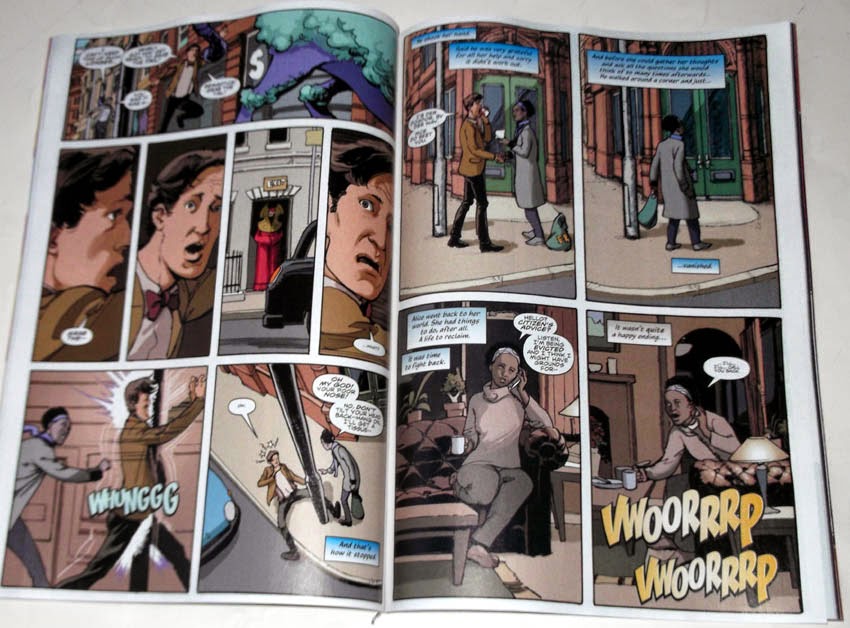 These are top quality stories by top people in the comics industry, most of whom are based in the UK. I'm reluctant to call this publication a 'reprint comic' in the same way that, say, The Mighty World of Marvel is because the strips have only very recently appeared in their original format a few months ago, also by the same publisher. I'd rather consider this a 'British edition' than a reprint, in the same way that books have editions in different countries. But I suppose most will still regard it as a reprint comic so each to their own of course.

In any case it's good to see another comic on the UK newsstands. Let's hope it proves to be a success! If you have trouble finding it in newsagents you can subscribe to it here:
http://titan.subscribeonline.co.uk/subscriptions/doctor-who-comic?offerCode=DWC1TM

Got my copy in Tesco's Lew, right next to the Marvel Panini & Titan DC UK editions - so I guess they are more savvy on where to display it etc. I prefer the magazine size as it shows the artwork so much better than the smaller US format and as you so rightly point out - its a real bargain for its price! This is the main reason I am giving it a try as I would never have bought the more expensive US editions!

Yes, it's a good idea to publish in the US and the UK to spread the costs out. Let's hope Titan might do other comics this way. (Although CLiNT didn't work but publication delays didn't help.)

No copies in my local corner shops so I'm glad I picked one up from Smiths yesterday.

So was Marvel UK's Planet Of The Apes weekly a reprint or a 'British edition' because that also followed hot on the heels of the U.S. version.

I guess it was in a way, although the UK PoTA used older Marvel reprints in the back didn't it? (If I remember correctly.)

Then there was Master of Kung-Fu in the UK Avengers weekly. Again, if I remember right, a few short 7 or 8 page MoKF strips were published in The Avengers a few weeks before they were collected in Giant-Size Master of Kung-Fu No.1 in the States.

I'd argue more for Titan's Doctor Who Comic being a 'British edition' though (as opposed to a normal reprint comic) because the strips were produced for Titan's London office by (mostly) UK based creators. Yes, the stories were printed in America a few months before the UK comic, but by the exact same publisher.

We automatically call them reprints out of habit but perhaps we need to rethink what a 'reprint' actually is. After all, when we get an American TV programme after it's been screened in the States we don't regard it as a repeat do we? If a book appears in the USA before the UK printing, do we consider it a reprint? No, it's a UK edition. Should the same apply to comics?

I dunno. It's probably not worth dwelling on it, especially at this late hour.

Surely the other Doctor Who comics by Titan are British too? They have a London publishing address in them.

That's a fair point, Gareth. Hmm. Ok, reprint comic it is then.

Found it in WHSmith right next to DWM and it's associated specials, and just above where the Marvel and DC titles are. I also happened to notice that 110% Gaming was both with the kids mags (above where the Beano is) and among the other video games mags - a smart move. Looks like the manager in that branch has some common sense.

Spent ages yesterday trying to find a copy of this. Thought it might be sold everywhere like Clint was when it was originally launched. Perhaps newsagents feel they have too many Dr Who Comics on their shelves already. As you said, eventually found a copy hidden in WHSmiths juvenile Comic's section. It was hidden by all those other comics in their over sized bags in which to hold their free gifts. I hope others are able to find their copy easier.

Yep, that's how my local Smiths shelved it too Reuben. I only found it by digging behind Doctor Who Adventures. It was completely hidden.

Publishers have a real and serious problem when shops don't display comics properly or put them in the wrong place. Yet no one seems to be tackling it.

Could this be the thin end of the wedge for the return of weekly British adventure comics?

Sainsbury's in Kidlington, Oxfordshire, had two piles of issues on a shelf above the children's titles and near the television mags, though some distance from Doctor Who Magazine and the genre titles. Doctor Who Comic hadn't yet been entered on their system last Thursday, so it had to be sold as an issue of Doctor Who Adventures, which would irk Titan!

That sounds like madness, Matthew. I'll pass on that info to Titan because I'm sure they'd be furious to hear a rival comic is getting their sales figures! I've come to the conclusion that some shop staff are quite dim. By doing that, Smith's automated ordering system will order more copies of DWA and less of Titan's comic!

Sorry, I meant Sainsburys, not Smiths.

I picked it up in my local newsagents, and they had it stacked with 2000ad and JD Megazine. I have just managed to read the first story, my oldest girl has had it since I bought it! Good stuff too the first story, nice packaging and big format. I'm fighting with Stringer block on this, British edition, commissioned and published in UK. American edition small format and single issue, British format large format anthology;-)

I did actually have a street named after me in Judge Dredd about 25 years ago. Dredd says something like "Corner of Stringer and Brickman". Sadly I think I threw that issue out by accident and I've forgotten which one it was now.

Now that the strips have moved over to this new comic do you know if it will it conclude the Sontaran story started in DWM? It kind of left things up in the air..?

The strips haven't moved out of Doctor Who Magazine, Colin. As I said, this new comic is a completely separate publication. Different publisher.

Incidentally, the Sontaran story concluded in last month's DWM. A new story begins in the issue that will be out this Thursday.

Oh ok. The last DWM I have is the Clara cover where the strip is continued. I must have missed one.

I'd been wanting to get some of the American ones, but couldn't be bothered / didn't have the money. Glad this came along! Bigger print, better price, and I can get it in Tesco on my way home, rather than having to trek into central Cambridge after work.

I should add that Titan still plans to release trade and hardcover collections of all these Dr Who comics later in the year. So people should easily be able to buy them in their local Waterstones too. Unless Titan have changed their mind.

Yes, the 12th Doctor trade paperback, collecting issues 1 to 5 is scheduled for 13th May according to the Previews catalogue.