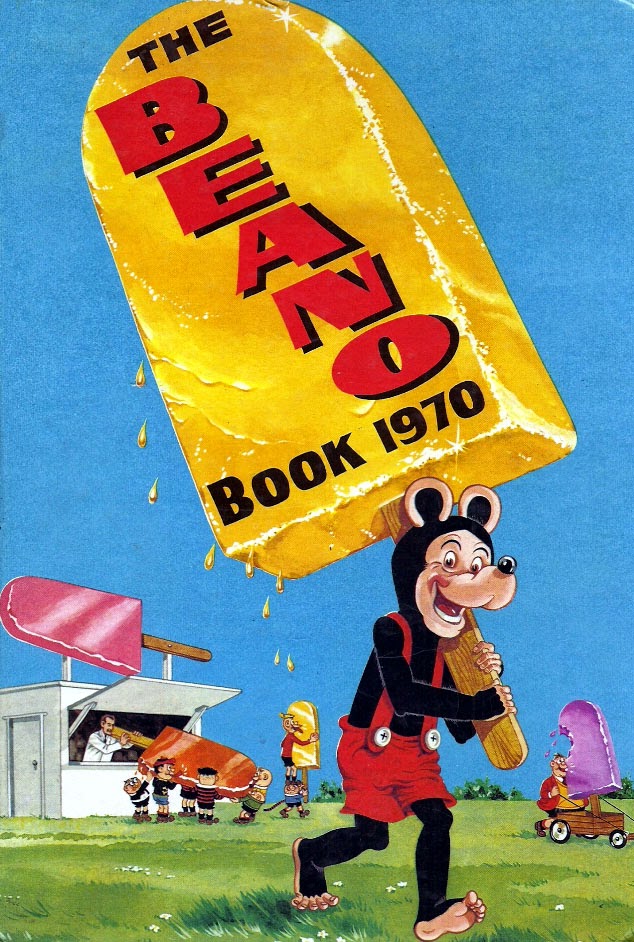 There's a discussion on Facebook at the moment about this annual cover so I thought I'd expand upon it here. This memorable cover to The Beano Book 1970 was painted by Dave Sutherland, who was the regular cover artist on the Beano annuals at that time (and for many years afterwards). He still draws The Bash Street Kids in The Beano every week of course, and this year will be his 53rd year on the strip!

The interesting thing about this annual cover is that the week the book was published, that week's Beano comic (No.1416, dated September 6th 1969) tied in with it, showing what happened next! A rare British comics crossover. Although the book cover was by Dave Sutherland, the strip on the weekly was by Biffo's regular artist Dudley Watkins. Sadly, by the time this saw print, Mr.Watkins had passed away suddenly the previous month. 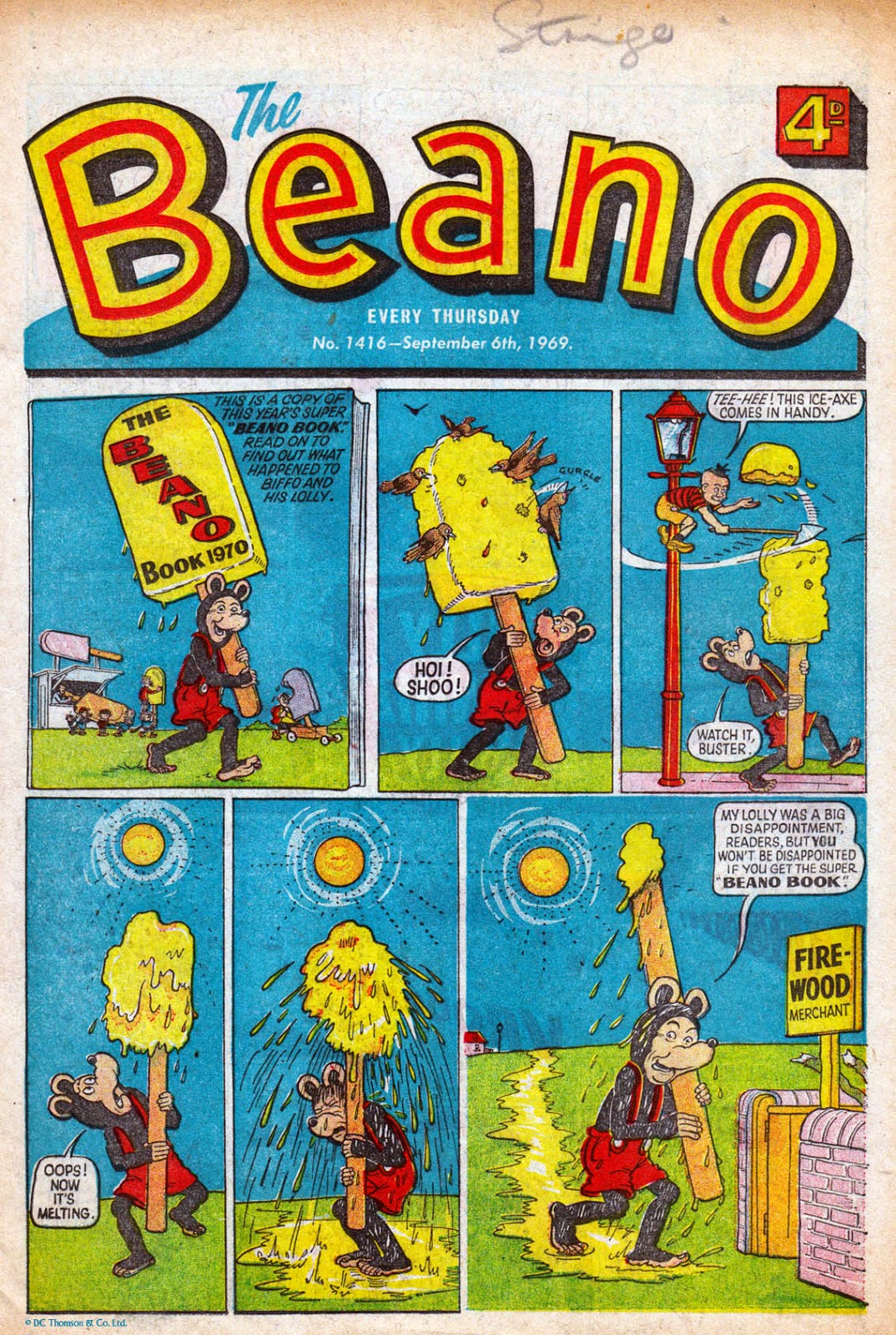 That same issue also carried an ad for the latest Dennis the Menace annual on the back page, with a vague link to that week's Dennis strip drawn by Davey Law. 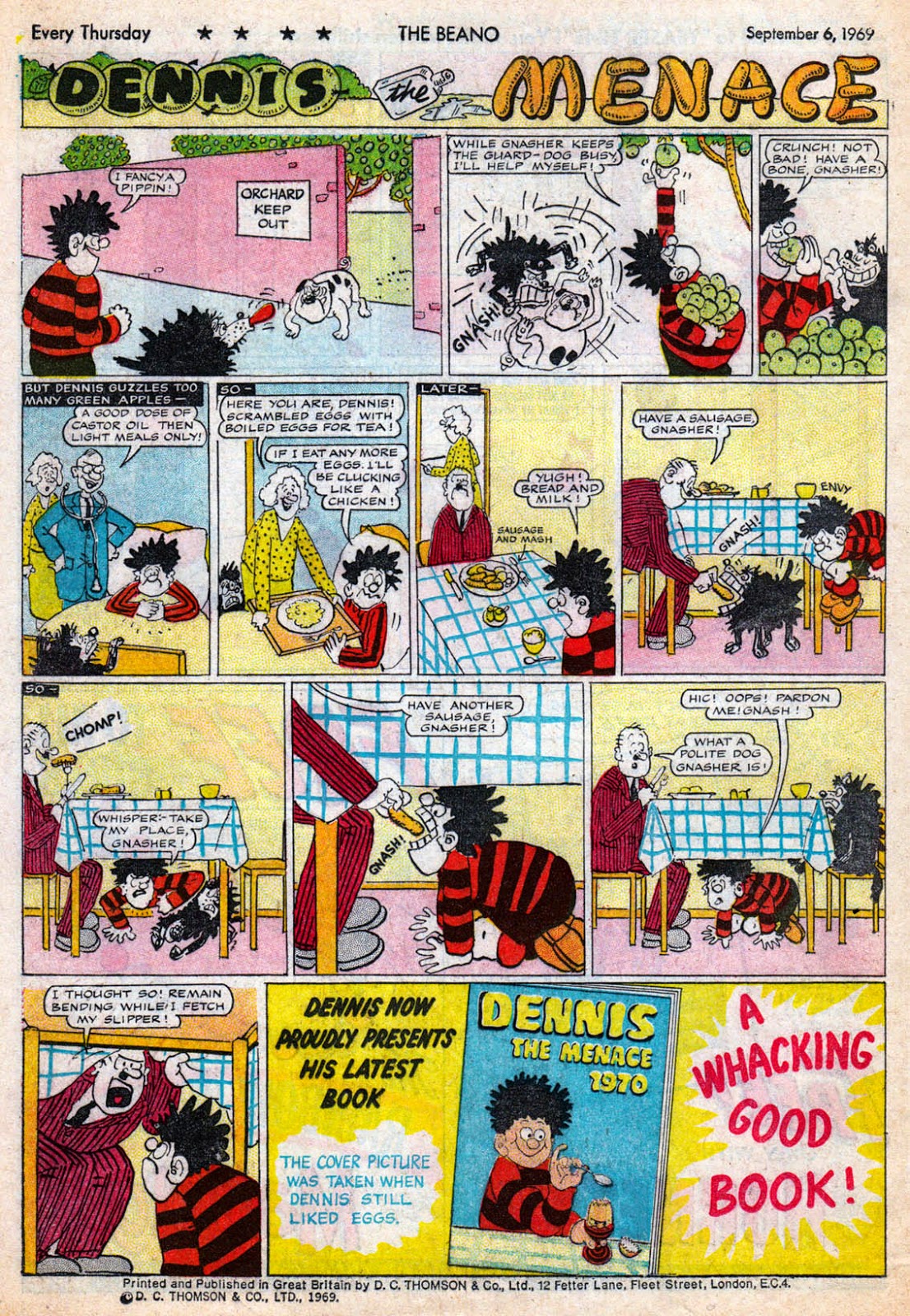 Terrific stuff! I'd not seen that accompanying story before. Super artwork. One of my favourites along with Ken Reid's 1962 Jonah cover.

It's quite a strange cover really. "Hey, this year let's have the annual cover showing Biffo carrying a giant melting ice lolly and the story continues in the weekly". Certainly one of the most memorable images!

That's a really clever tie in to the annual and a great find, how do folk remember these things, but glad you do as it brings back some great memories - I wonder if they did that the next year as the annual had Biffo holding up an empty picture frame - the 1970 Beano annual was my last Beano annual and my last all humour annual (not counting the Broons / Oor Wullie but that's a Scottish granny/ Hogmanay thing) as I was 10 going on 11 then (although I still picked up the odd weekly humour title for a while after that) as my focus was on adventure and super-hero books like Lion, Smash and US titles etc.

During the 11 years I was a regular reader (1964 - 75) I'm pretty sure this was the only time they did a crossover like that, although they did promote the annual and summer special within the strip some times. (eg: showing Biffo buying it).

I tended to buy pretty much every UK comic I could afford up until I left school in 1975. My loyalties would shift around of course. I wouldn't be having 30 comics a week or whatever. The comics I was reading regularly in 1969 were Dandy, Beano, Buster, Topper, Sparky, Smash (although I gave up on that for a year after 12 weeks of the new look), Hotspur, Tiger, TV21 (after 3 years absence), TV Comic (after only having it occasionally), Super DC... and various Marvel comics but not the same ones month to month. Every now and then I'd buy others for a week or three, such as Lion and Valiant.

The gag of Dennis going under the table pretending to be the dog in order to nick some sausages was,er, borrowed from an Our Gang film (probably "Birthday Blues") where Spanky did the same thing. (When Spanky's brother caught on, he sprinkled Tabasco sauce on the next sausage he fed Spanky.)