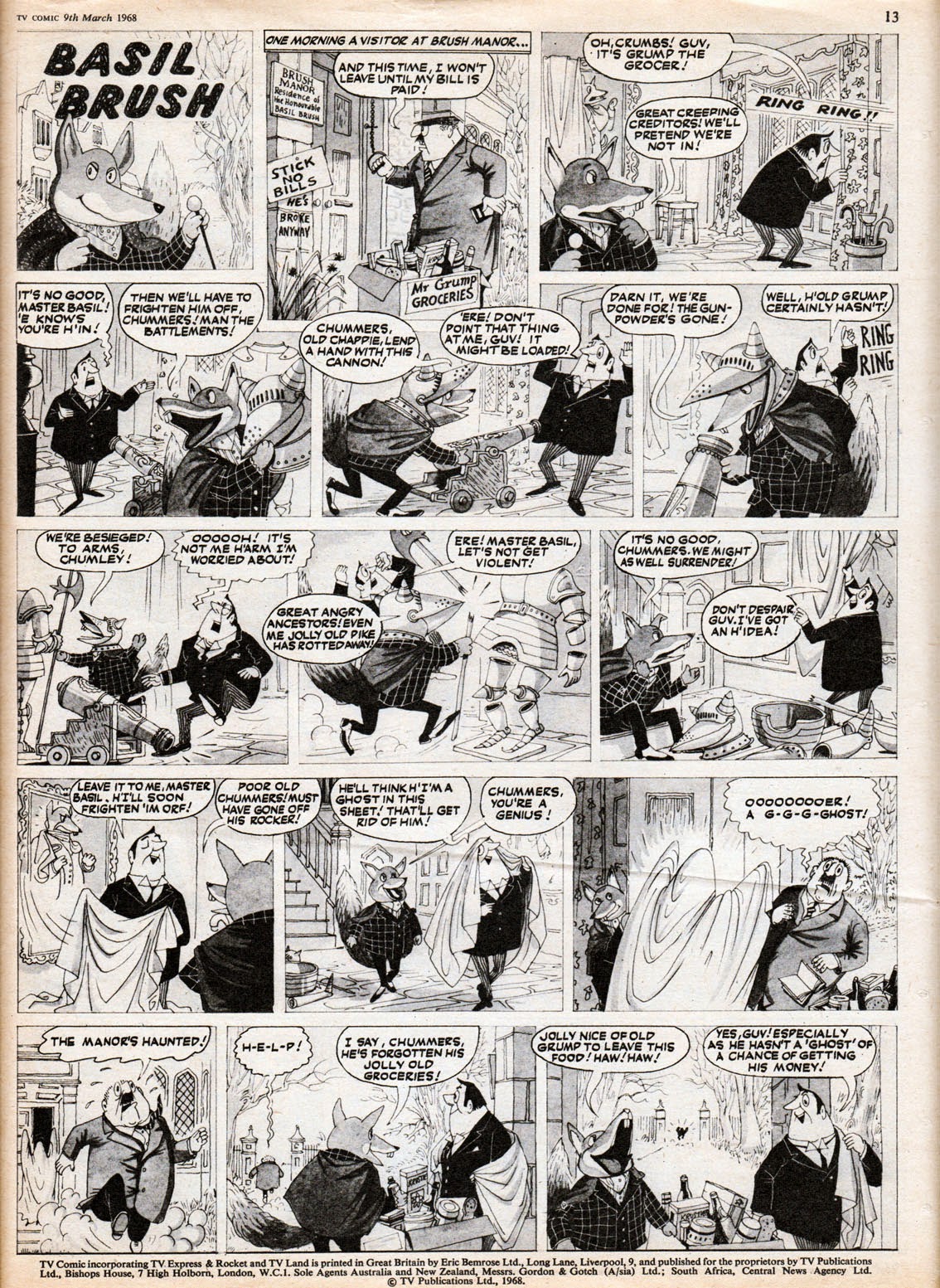 Here's something I noticed whilst looking through old issues of TV Comic. I've previously shown Basil Brush strips that were drawn by Chas Sinclair (see here) and he's the artist I've always associated with that strip... but he wasn't the only one to draw it.

The example above is from TV Comic No.847, dated 9th March 1968, predating the Sinclair strips, and is in the distinctive style of John Ryan! As you'll all know, John Ryan was the creator of the strips Captain Pugwash and Harris Tweed for Eagle, and of course Pugwash later became a very popular TV series.

I don't know how many weeks John Ryan drew the Basil Brush strip but Chas Sinclair was definitely the artist a year later when I started buying TV Comic regularly. Dick Millington drew some as well apparently. Anyway, I thought it was an interesting page and worth posting here for fans of John Ryan's work.

He just looks weird here- human-sized and with legs !!

Well it's necessary for him to have legs in the strip of course as he's not supposed to look like a puppet, but John Ryan did draw him too big admittedly. The Chas Sinclair version was a bit smaller and more friendly looking.

And, of course, who created Basil Brush ? Peter Firmin who was to be much better known for Ivor the Engine and Noggin the Nog, Bagpuss and all the wonders with his partner Oliver Postgate.

If you haven't seen it do try to pick up "The Art of Smallfilms" a beautifully produced Four Corners book.

I'm not really interested in the history of children's TV to buy a book about them Hedley but thanks for mentioning it. I'm sure it'll prove useful for some readers of this blog.

I had no idea that John Ryan ever worked for TV Comic, least of all on Basil Brush (presumably he was paid a lot less than his strips for Hulton and Odhams). Fortunately he returned to television work in the early 1970s with Sir Prancelot and then a series of colour remakes of Captain Pugwash. I was lucky enough to see John give a talk shortly before he died and he was a lovely old man.

Incidentally, it's worth noting that Oliver Postgate and Peter Firmin also wrote and drew a lot of comic strips based on their Smallfilms creations - mostly in titles from the same stable as TV Comic such as TV Land and Pippin.

Thanks for the info, Phil. The only Smallfilms shows I saw were Noggin the Nog and Captain Pugwash, and I never read those nursery comics so they passed me by really.

John Ryan gave a talk at a London comic con in the 1990s. I remember he was most upset about the tales of his Pugwash characters having sleazy names, which he strenuously denied as it simply wasn't true of course.