Diana's 'The Avengers' to be collected 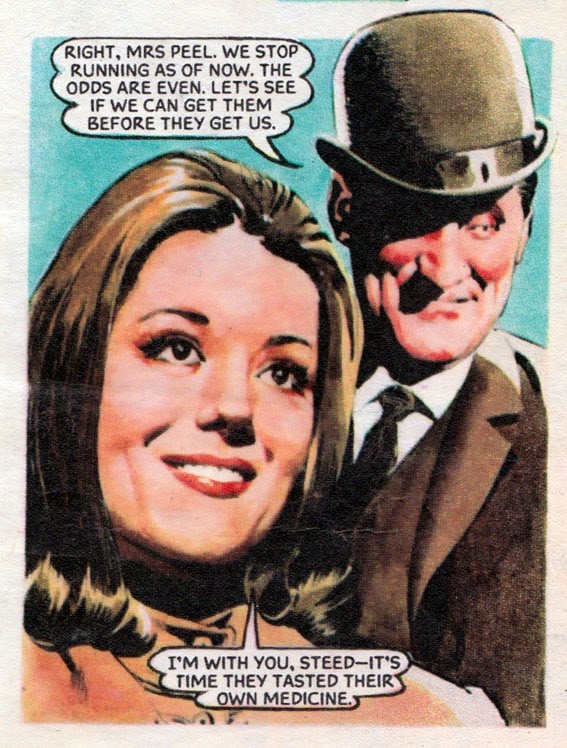 Back in the 1960s the DC Thomson girls comic Diana ran a full colour serial based on the TV series The Avengers. I blogged about it here last year, and at the time a few people who left comments said the strips deserved to be collected into a book.

The good news is that's now going to happen, courtesy of Big Finish (best known for their Doctor Who audio adventures). If you missed the information that John Freeman posted about it on his Down the Tubes blog last week you can find out the details here:
http://downthetubes.net/?p=20759

The strip was superbly illustrated by Emilio Frejo with assistance from another artist, Juan Gonzalez Alecrejo on some episodes.

If you didn't see my blog post about the strip last year you'll find it at this link:
http://lewstringer.blogspot.co.uk/2014/02/the-avengers-comic-strip-1967.html
Posted by Lew Stringer at 21:20

Email ThisBlogThis!Share to TwitterShare to FacebookShare to Pinterest
Labels: Diana, The Avengers

Yeah, I remember that post, Lew, and yeah, that's good news, as so many of us who'd be interested in a UK Avengers comic strip never knew of its existance before ( not having seen inside a Diana comic ).

Although many of us avoided even glancing at girls comics when we were kids, there was a lot of good quality stuff in Diana. I bought a stack of them on eBay a few years ago. I've showed some John Burns artwork from them here in the past and I'll have to get around to seeing what other great strips were in there sometime.

I know what you mean. I wanted Lady P, but didn't dare pick it up. I don't know why I didn't just say, "...and I'll just have this as well, for my (imaginary) sister, please."
That would have worked, wouldn't it?

As well as my own Marvel comics I also used to read my sister's comics such as 'Mandy' and 'Judy' - I thought they had quite enjoyable stories and I didn't find them at all "girly". My sister also got 'Misty' which had a supernatural theme and surely would have appealed to plenty of male readers if it hadn't been a "girl's comic". With Marvel comics you could read Red Sonja or Ms. Marvel and there was nothing odd about it, they were just part of the same Marvel universe as Spider-Man or the Hulk.

Going to be a long wait (November 2016!) but that's my copy pre-ordered. Now if only someone would collect Tom Kerr's Avengers run from TV Comic.

Sorry for the delay in approving your comments for publication folks. I had a deadline I needed to meet.

From the 1960s girls comics I've seen I don't think they'd have held much appeal to me as a kid even if I had risked ridicule by picking them up. Nice artwork though.

Colin J, the difference with those comics you mention is that Sonja and Ms.Marvel were aimed at a mixed readership. Or mostly a male adolescent readership really.

Colin B, I think the only TV Comic Avengers strips I've seen were by John Canning. I completely missed Tom Kerr's run.

Col, you're not the first bloke I've heard say that comics like Bunty and Judy had some addictive stories in them! I do know about Misty and Tammy, because, as an adult, I have unashamedly bought them myself FOR myself!
But I now wonder just what did I miss in the others?
- Lew, if ever you can't think what to blog about, we are no longer embarrassed!

Lew, wish I could say I had them but sadly only seen some enticing images online. The Avengers comics website shows he only did 14 pages (2 stories). Hopefully if this new collection is successful, they'd consider collecting the Canning and Kerr stories.

Only 14 weeks? That explains how I missed them. I only had TV Comic sporadically until 1969, then regularly for about two years, then on and off again afterwards.

John, I'm never stuck for comics to blog about. Just stuck for time, as creating new strips takes up most of my day. Lots of ideas for upcoming blogs, when I have time to scan the strips and write about them.

I loved looking at the Diana scans from your past post and can't wait for the Big Finish compilation. Is it hard to track down original copies of the comics? I don't see them show up on eBay here in the States. Maybe we can do a short interview soon for my SPY VIBE website about your collection? Warm Regards, -Jason (Spy Vibe)

I'm not sure how rare those issues are, Jason. I saw a bunch of Diana comics at a reasonable price and bought them because I'd heard it was a good comic. I didn't realise the Avengers strips were in there until I had them. (I don't have every episode of the strip. Just a few.) I don't follow the value or rarity of comics so I don't know how often (or not) those issues turn up on eBay UK. I'd guess they don't turn up that often so perhaps I just struck lucky.

Well I'm getting a copy for my birthday and already have the download.