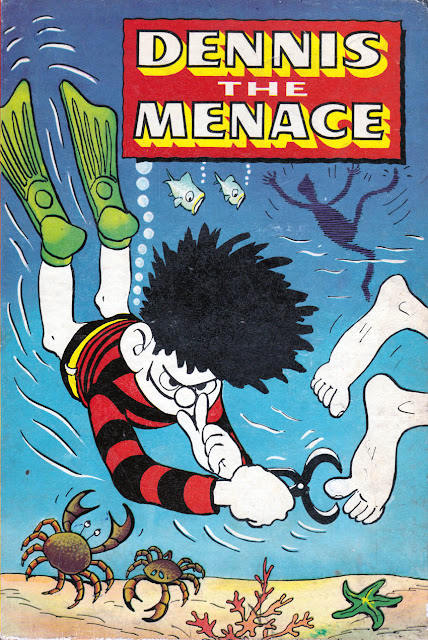 This coming week is the 65th anniversary since Dennis the Menace was unleashed upon the world. He first appeared in The Beano dated 17th March 1951. As comics were dated to the weekend ahead back then, and The Beano was published on Wednesdays, that would mean kids would have been buying that issue on Wednesday 14th March 1951.

Dennis' first artist was of course Davey Law, whose funny, contemporary style heralded great changes for comics in the 1950s. Seeing Dennis the Menace in his younger brother's copy of The Beano inspired Leo Baxendale to contribute to the comic, so without the Menace we might not have had Leo's creations The Bash Street Kids, Little Plum, The Three Bears, or Minnie the Minx. I think it's fair to say that Law's Dennis the Menace was a gamechanger and possibly the most influential character in the history of British humour comics.

Here's a few examples of Dennis from over the years. This is the very first strip from 1951... 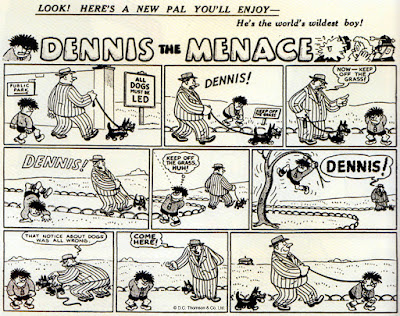 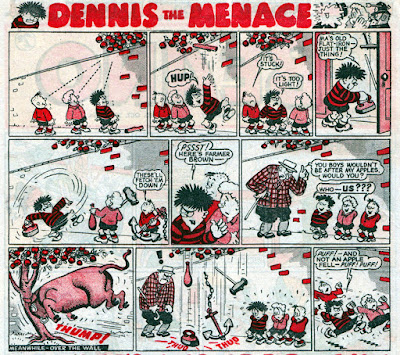 At the top of this post is the cover to the third Dennis the Menace annual, published in 1959 for 1960. It reprinted numerous Dennis strips from the 1950s. Here's a selection... 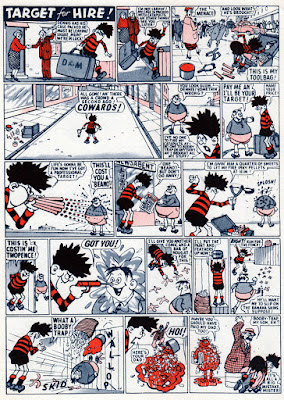 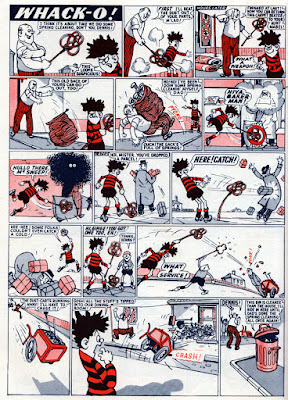 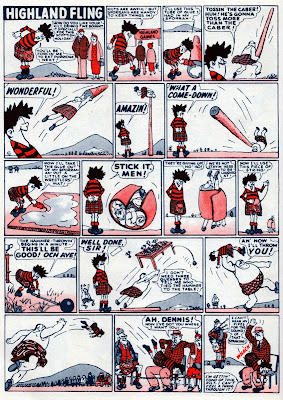 When I first discovered the strip in the 1960s it had proved popular enough to be on the back page in full colour. This one from 1965, again by Davey Law... 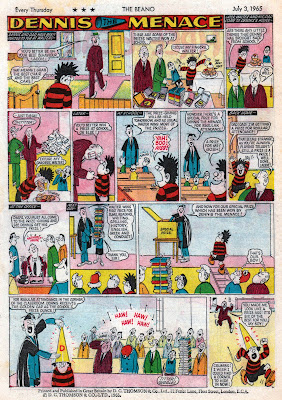 Sadly, Davey Law passed away in 1971. His creation continued under the hand of David Sutherland doing a fine imitation of Law's style. Dennis' popularity continued and in 1974 he replaced Biffo the Bear as the cover star of The Beano. Here's an example of Sutherland's version from 1975. As you can see, by now Dennis had been joined by his dog, Gnasher, who first appeared in the strip in 1968... 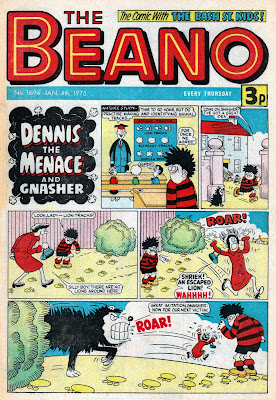 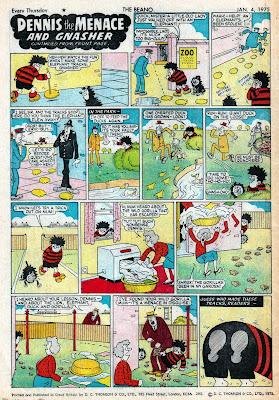 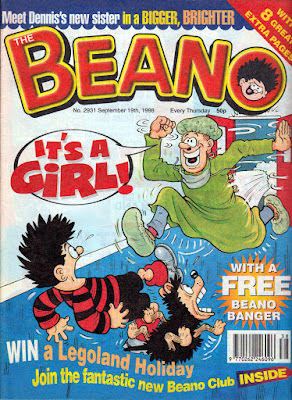 The current Dennis the Menace artist is Nigel Parkinson, doing a great job every week with a version that combines the best elements of the traditional Dennis but is still his own... 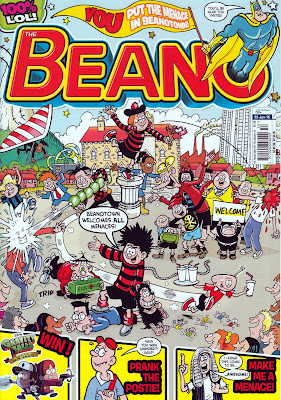 Although Dennis has now become a valuable merchandise brand for D.C. Thomson at the heart of it is still the weekly strip, amusing children of all ages, just as it always has. Happy Birthday Dennis! Long may you reign as the World's Wildest Boy!

All Beano artwork in this article © D.C. Thomson and Co. Ltd.
Posted by Lew Stringer at 22:59

I just love those early Davey Law strips with his "tighter" style - I have to admit I never understood the popularity of Dennis when I was a kid in the 60s (it was actually one of my least favourite strips) until I was given a Dennis annual one Christmas (the 1968 annual) which I thought was excellent - he was still never a favourite of mine but I kinda "got it" after that (especially appreciating Davey Laws art) - its good to see he is still as popular with the kids after all this time.

Dennis wasn't one of my favourites as a kid, I must admit. Not that I disliked him, just that I preferred other strips more. I never had a Dennis annual until I bought that 1960 one recently.

Knew a boy at school called Denis who of course had the nickname Menace. I thought that was the coolest nickname in the world. In fact I still do.

Fun blog to scroll through and bring back a few memories as well as some info on the new stuff that's going on.

This post reminded me of a drawing I did last month of Dennis and his namesake over in the US. I even sent a message to The Beano editor to get some confirmation on Dennis' debut. Happily your date also lines up with the one I got but sources I found while trying to get the info all gave conflicting dates.

Here's the pic I drew, if you're interested:
http://workingdoodles.blogspot.co.uk/2016/06/menace-vs-menace.html