Going off at a tangent about... shoes?!? 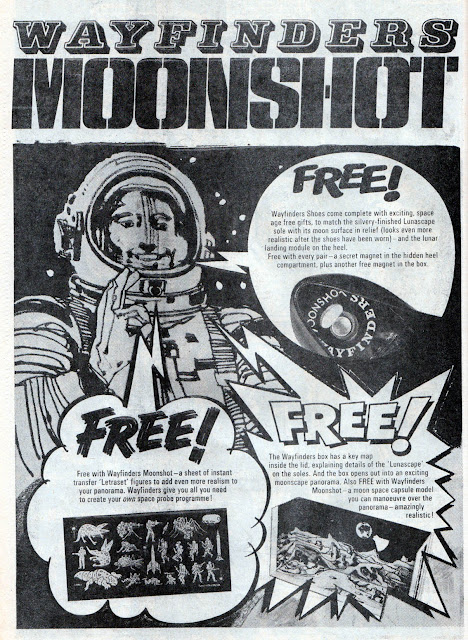 Ah, they don't make kid's shoes like they used to. Well they probably do. Today's children's shoes are probably better than ever. I dunno. I lost interest in them when I stopped being a kid. However, back in 1969 I had a pair of these Wayfinders Moonshot shoes and I thought they were the coolest thing on Earth. (Not that we used the term "cool" in 1969. It had become passé by then. Whose idea was it to resurrect it?) 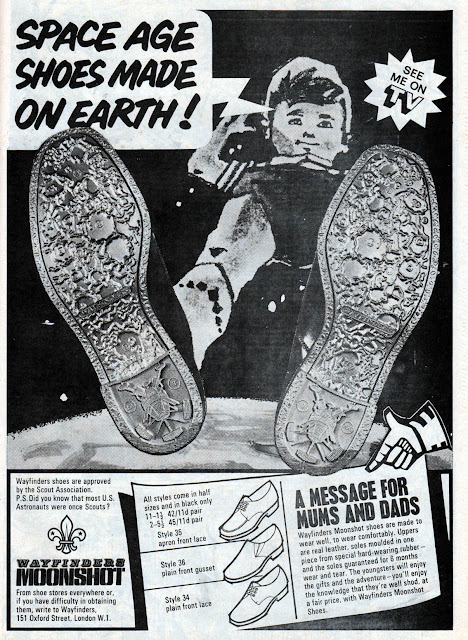 Anyway, today I received a pile of sixties comics and noticed this advert in one of them. I'd almost forgotten about those shoes. As I was into anything pertaining to space at the time these were essential. Not only did those soles show a Lunascape they were silver too! How futuristic was that? Plus a little removable magnet in the heel, - although that became a bit uncomfortable after the covering wore down.

There were also a pair with animal tracks on the soles and a compass in the heel but I was only interested in the Moonshot ones. We were living in the Space Age you know, walking on the Moon. Or at least a mini version of it.
Posted by Lew Stringer at 19:47

Email ThisBlogThis!Share to TwitterShare to FacebookShare to Pinterest
Labels: Wayfinders

It almost seems a shame to wear down the soles of these great Wayfarer shoes. I wonder if these shoes originated in the Uk or the USA? Time to do a bit of digging on the internet. And yes before you ask, I do have way too much free time on my hands!

The soles didn't wear down too badly as I recall but as they were children's shoes one tended to grow out of them before they'd worn out.

Peter, it was a six month run of Tiger and Jag comic in excellent condition from 1969. I think I've pretty much re-acquired all the old comics I wanted now. Time to stop collecting! :)

Time to stop collecting ?! honest? I don't go out of my way to collect comics but still there are a few I keep an eye out for otherwise my interest in comics and visiting comic shops would be pretty low.

I'm still buying new stuff as there's some great talent in comics these days, and I buy books about comics (Yoe! books etc) but, yeah, can't think of any old comics I want that I don't have. I'm sure I'll still be tempted by the odd few though. For example, I had no intention of buying a complete run of Scorcher until I saw it for the right price. I should never say never I guess. In the end though the harsh reality is that I'll probably never read or re-read the amount of comics and books I already have so I need to be realistic.

Yeah Im the same Lew I have so many comics in my loft (and a lot I don't recall buying) so time to off load some of my 60s/70s UK stuff on Ebay - But I do fancy picking up some of the 60s early 70s US classics I stupidly got rid off (but its the cost). The collected editions are good but you cant whack an original comic version.

I pick up a few new books but can't really get into them as I have gotten out of habit of reading comics (US comics mostly leave me cold now especially my favourite DC titles) but MARVELS Black Widow looks good as do some of the Titan output and 2000AD is much improved.

Yes, the new Black Widow is excellent. I also enjoy The Vision, All-New All-Different Avengers, Amazing Spider-Man, Silver Surfer, and even Contest of Champions is fun. Mainly though I read US comics via the Panini and Titan reprints. Outside of superheroes, there's a wealth of good material from today's creators here and abroad. We live in interesting times with more diversity than ever.

So Lew, did you watch the Apollo moon landing ? Unfortunately, I was only three at the time but my mother saved a special issue of LIFE magazine which I read over and over growing up.

I certainly did, Colin. Not live, as they landed about 4am GMT, but I remember the teachers showing us the news footage on the school TV the next day as we were all gathered in the hall. A fantastic climax to a great decade!