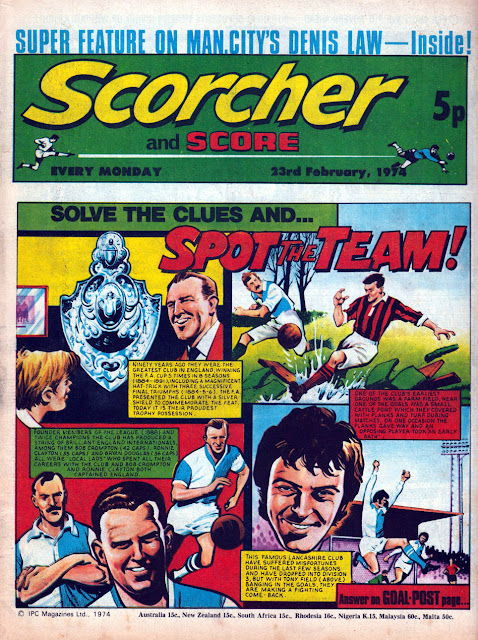 Above is the cover to Scorcher and Score dated 23rd February 1974... 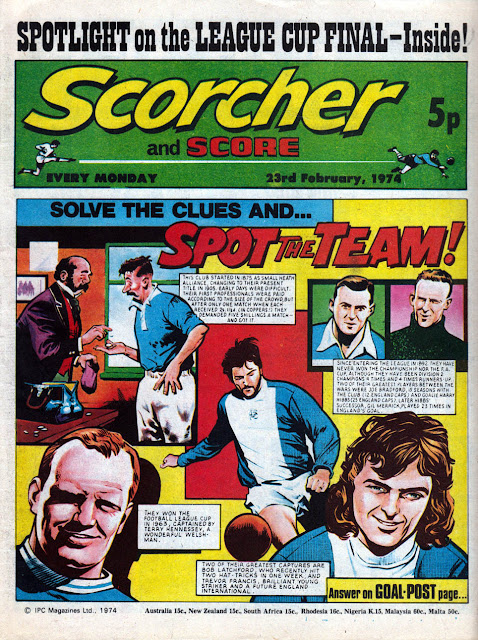 Two different issues with the same date? The reason is quite simple. Due to a production mistake, the second one is actually the 2nd March issue but has the wrong cover date.

When I bought a complete run of Scorcher last year, I was advised by the seller that the 2nd March issue was missing. He'd never had it when he bought the comic originally. I searched on eBay and despite old issues of Scorcher being plentiful I couldn't find the elusive 2nd March issue. I assumed that week may have been skipped due to industrial action that was rife at the time. (Many IPC comics skipped weeks in the Seventies.)

Then, recently, thanks to the members of the Comics UK forum, it became clear that there were actually two different issues with the same date of 23rd Feb. Thanks were also due to historian Derek Marsden, who located a copy of the version I didn't have which I was able to order from the dealers 30th Century Comics.

Mystery solved and I now have a complete run of Scorcher, 1970 - 74. And I don't even like football! So, for any of you who collect this comic, bear in mind that there are two issues bearing the 23rd Feb 1974 date and none with the 2nd March date.
Posted by Lew Stringer at 19:09

Email ThisBlogThis!Share to TwitterShare to FacebookShare to Pinterest
Labels: scorcher

I'm having a similar problem with Buster from 1974 - 10 weeks seem to be missing - britishcomics.wordpress mention Valiant (missing 7) and Lion (missing 5) from '74 - so I'm assuming it's the same for Buster but to a greater extent.

Phil-comic's recent complete year ebay auction of 1974 Buster - had those exact issues missing from the listing. He told me "It's odd that they would be missing from this run as the original owner seemed to collect every single issue, pretty much."

I suppose I'll have to cross reference the ongoing stories to see if they make sense!

I would have thought that with Phil's experience as a seller he'd have known that industrial action meant that several various weeks were skipped at that time. The stories themselves continued from issue to issue though. It just meant there was a gap in frequency, not in the storylines. The "missing" issues aren't really missing. They were simply not published.