Pup Parade is back! 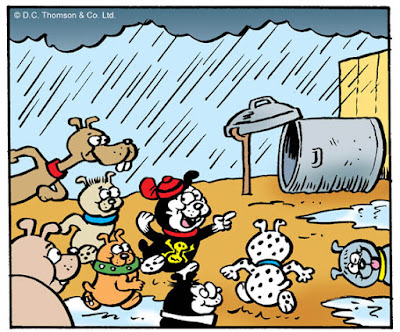 I can now reveal what my new regular strip for The Beano is, because it starts this week! It's a revival of Pup Parade starring The Bash Street Dogs! The strip originated back in the 1960s drawn by the great Gordon Bell, although the pups first appeared in The Bash Street Kids strip by David Sutherland. Over the years the strip has returned on and off by various artists and now the reins, or dog leads, have been passed to me. I hope I'm worthy!

The first full page strip appears in The Beano today! Don't miss it!

Email ThisBlogThis!Share to TwitterShare to FacebookShare to Pinterest
Labels: Pup Parade, The Beano

I used to love "Pup Parade" as a kid. It was good to put a name to the 60s artist of my childhood, he was excellent. Good luck with the new strip Lew Im sure it will be a success and I may pick up the Beano this week for a wee read and trip down memory lane (as its my birthday on Monday) - the logo looks great.

Nice to see it get a full page again instead of three panels like the last couple of runs.

Great stuff, loved Pup Parade as a kid, all things Bash Street went down well in this house, still do! Hope its a long gig Lew!

Thanks David. Hope so!

So my son's subscription Beano arrived this morning (the one dated 9th April with the 2nd of your Pup Parade strips). He flicked through it first and suddenly punched the air with a loud cry of "Yes!" I asked what that was for and he said "Pup Parade is in it again!" Later he giggled his way through the strip and declared it was the "Best strip this week".

I thought you would like to know! I'll encourage him to email the Beano and tell them that later.

That's nice to hear. The second one is my favourite so far. Hope he continues to enjoy it.

Congrats on Pup Parade. Am I correct in remembering that we also used to have the Bash Street Cats?

That's right, Martin. I'm not sure if we'll be bringing them back this time around though but you never know.