Credit where credit's due

Starting from today, The Beano is running full writer and artist credits on every strip! This may not seem a big deal for those of you accustomed to such things in 2000AD and other comics but it's a bit of a milestone for the near-78 year old Beano. 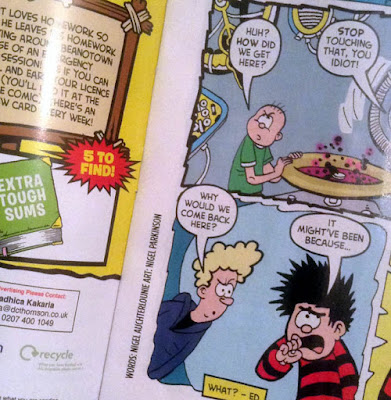 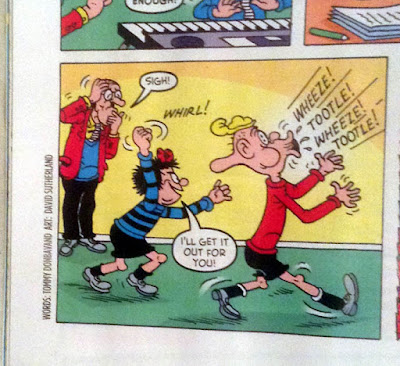 For many years, DC Thomson never published the names of the strips creators, or allowed artists to sign their work. The exceptions being Dudley Watkins, who signed his strips from around 1946 to 1960, and Allan Morley, who initialed his strips 'A.M.'. To be fair, Thomsons were not the only company prohibiting creators their credit back then, as Amalgamated Press / Fleetway were mostly guilty of that also. Notable exceptions included Hulton's Eagle and Girl weeklies that ran writer/artist credits on the strips. Some of the old British independent comics of the 1950s also included artist's signatures (although many seemed to be pseudonyms).

Why were creators denied visibility? Most likely because publishers were fearful of rivals poaching their talent. (In the pre-convention / pre-internet days it was more difficult to find out who drew what.) The situation became more relaxed over the years. By the 1960s, Odhams were allowing some artists to sign their pages on Wham!, Smash!, and Pow! (although that ceased when IPC took control of Smash!) There were occasionally exceptions. The one-off annual The Valiant Book of Mystery and Magic 1976 ran full credits (see here) and in 1971 Polystyle's Countdown had artist credits on every strip. One IPC comic that went against the status quo was 2000AD that began including creator credits on each strip, and when they raised little objection by management, some other comics in the company followed suit.

By the 1980s the signatures of artists became more widespread on UK comics. (Using myself as an example here, I've been freelancing in comics since 1983 and have signed pretty much every strip I've drawn.) Fast forward to today and it's now common practice to allow signatures on strips. However, the scriptwriters tended to remain anonymous, at least in the humour comics. (1986's Oink! being once exception that springs to mind.) Two years ago, The Beano introduced credits on its contents page (see here) which acknowledged the writers, artists and internal staff but that feature was later dropped. Now, the comic is running credits alongside every strip, and not before time. Curiously, this time around the staff aren't credited (even though many magazines, including Toxic do credit staff) but hopefully that will be added later. Let's hope this new era of openness continues! 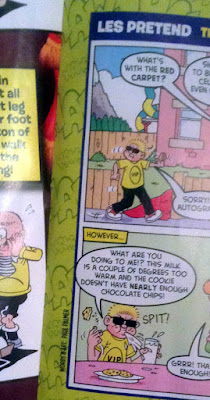 Well, as I said, some artists did sign their work and some comics ran full credits, but many did not unfortunately.

Yes plenty of examples of when it did happen there, but as you say they were unfortunately the exceptions rather than the rule. With Oink! being my first comic I was accustomed straight away to who wrote and drew what and as a kid it gave me a connection with the comic and the team behind it that others comics lacked.

Yes, I was pleased we were able to put credits on our strips in Oink! We were all very proud of our work for that comic so it was only right it should feature credits. Like you say, it establishes a connection with the readers too. It never did Marvel any harm and every comic should adopt that attitude in my opinion.