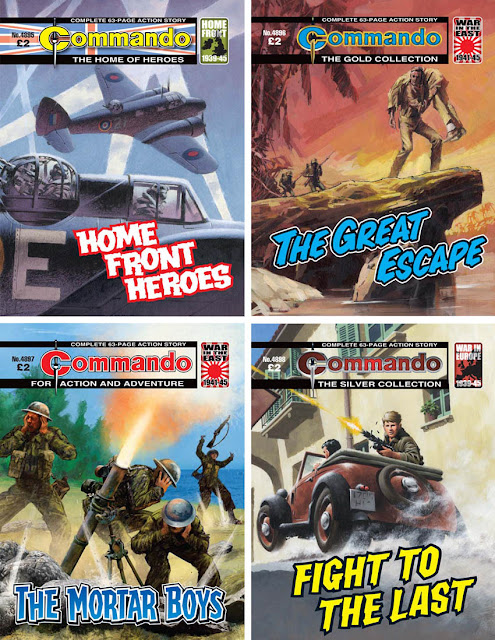 Here's the info on the four issues of Commando, out this week from DC Thomson. Click on the links to read a preview of a few pages...

Commando No 4895 – Home Front Heroes
The crew of a Boulton Paul Defiant night-fighter were puzzled. Why was an Airspeed Oxford trainer aircraft flying above England under cover of darkness? The gunner wondered if perhaps something secretive was going on.
How right he was. But there was no way that he could have known that the Oxford was being flown by a German crew, and was an integral part of an audacious plan by the Nazis to snatch back one of their spies.
At times the Home Front was almost as dangerous as the Front Line.

Commando No 4896 – The Great Escape
Ted Malloy knew him as Corporal Don Granger of the Australian Army, his best pal, young, dark-haired and full of spirit.
The Kachins, a Burmese tribe, knew him as “Urgu” — their Holy Man, chief and river god, tall with a lined face, bronzed skin, a mop of snow-white hair, and no memory of any past.
Ted and Don were the only two men ever to escape from “Death Valley”, the dreaded Japanese labour camp, where men died by inches under the blazing sun and the whips of the guards.
The tale of how Ted got clear and how Don became Urgu truly is a thrilling one.

Introduction
It did not come as much of a surprise to learn that a Commando book carried this title. It appeared a mere two-and-a-half years after the cinema release of director John Sturges’ classic prisoner-of-war movie in July 1963.
However, this story has only appropriated the movie’s title as the setting and content are completely different. In fact, with its jungle tribes and allusions to river gods, our tale probably owes more to the fantasy fiction of author H. Rider Haggard, but given a gritty, World War II twist.

Commando No 4897 – The Mortar Boys
Brothers Vic and George Adams were part of a Pacific Expeditionary Force mortar team. They had been tasked with engaging the Japanese on Mono Island in the South Pacific.
Their superior officer, Lieutenant Jeff Danten, was not keen on mortars, seeing them as a waste of time compared to a decent machine-gun. It didn’t help that Danten was also impatient and reckless, too eager to get into battle without decent tactics.
It looked like the Mortar Boys had more than just the enemy to worry about…

Commando No 4898 – Fight To The Last
When Fred Burke made a vow to his dead mate that he would fight to the last to see the war won, it wouldn’t be his fault if the Allies lost, for Fred was a man of his word. So in Fred’s book anything went — like breaking out of a prison camp for a start, then after commandeering a civilian vehicle, battling alongside the partisans to hold a vital bridge. Fred just went on fighting and fighting…

Introduction:
This is a relentless tale where Lance-Corporal Fred Burke is driven by a promise made to his best friend that he will never give in until the War is won.
It’s a testament to the work of all the creators involved that, despite the fairly straightforward premise, our hero is so full of determination that we can’t help but admire his integrity and courage and are with him every step of the way.
Therefore, in terms of script, art and cover, Fight To The Last remains a classic, textbook Commando to this day.
Scott Montgomery, Deputy Editor
Fight To The Last, originally Commando No 1108 (March 1977), re-issued as No 2443 (February 1991)