Preview of next week's COMMANDO comics 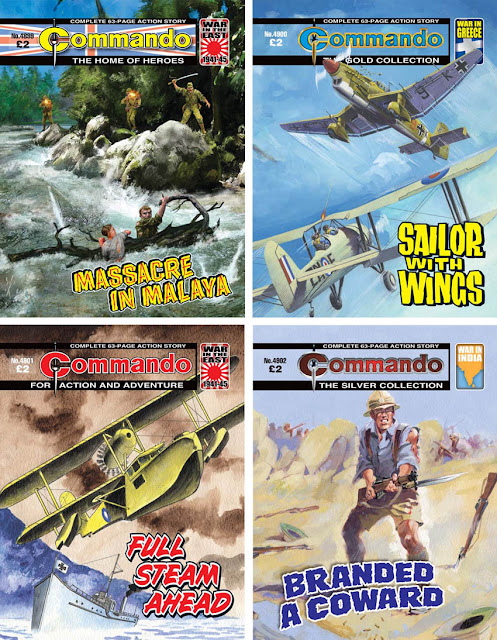 Here's an advance look at the covers and story info for the four issues of Commando that will arrive in newsagents next Thursday (24th March). Thanks to DC Thomson for supplying the material.

Commando No 4899 – Massacre In Malaya
In the arid jungles of Malaya in 1941, British and Commonwealth forces held out against the relentless advance of the Japanese.
Private Josh Combe and his unit were determined to protect the life of a civilian boy who had been left silent, traumatised and alone by the murderous actions of a pair of enemy officers.
In a last-ditch attempt to get to friendly territory they would have to take to the river to survive.
Story: George Low
Art: Olivera/Rodriguez
Cover: Janek Matysiak

CommandoNo 4900 – Sailor With Wings
Lieutenant-Commander Jim Treggaron, pilot in the Fleet Air Arm, had the blood of the old Cornish pirates in his veins — or so his men said. Otherwise, he’d never have tried to organise his Swordfish squadron to operate from a little beach in Greece. They were supposed to fly from their aircraft carrier.
However, Jim found a bunch of tough Resistance helpers, a cave full of old R.A.F. fuel and ammo, and a beach long enough for take-off.
The Italian navy was in handy range so zooming into action went the
SAILORS WITH WINGS

Introduction
Peter Ford is undoubtedly one of Commando’s unsung heroes from the earliest days of the title — and is a rare example of an excellent artist who was also a great scriptwriter. In terms of art, one of his specialties was aircraft illustration. Even from the first, dynamic page opposite it is apparent that we’re in for an action-packed, aeronautical treat.
Buccheri’s cover is superb too — although one does wonder if Peter Ford had hankered to supply the cover too and make this book a creative Commando hat-trick!
Scott Montgomery, Deputy Editor
Sailor With Wings, originally Commando No 239 (December 1966)
Story: Peter Ford
Art: Peter Ford
Cover: Buccheri

Commando 4901 – Full Steam Ahead
So, just how did two downed Royal Australian Air Force pilots end up on a secluded Pacific island — as prisoners of a long-forgotten Imperial German Navy unit whose unhinged leader was determined to complete a decades-old mission?
Sergeant Matt Herford and Corporal Ben MacAuley would have to commandeer an ancient, steam-powered torpedo boat in an attempt to escape and warn their superiors of an imminent threat.
It’s a tall tale indeed, fantastic in every sense of the word.

Commando 4902 – Branded A Coward
The heroic last stand of Lieutenant Hugh Overton in the mountains of the Indian North-West Frontier won even the respect of the enemy tribesmen who had wiped out his patrol to a man.
Yet by his own people Hugh was branded a coward, a deserter who had fled in terror in the face of the enemy, condemning his men to death!

Introduction
At first glance you might think that this book has several overly familiar traits that you might expect to find in a Commando story.
An officer wrongly accused of cowardice. Check.
An object – in this instance a silver cigar case – which serves as an important plot-point, or “maguffin”, according to film director Alfred Hitchcock. Check.
A relative of the accused who is determined to find out the truth. Check.
However, thanks to the conviction of all the creators involved, it all still works — no matter how superficially familiar the tropes of the tale itself may seem.
Scott Montgomery, Deputy Editor
Branded A Coward, originally Commando No 2440 (January 1991)
Story: C.G. Walker
Art: Keith Shone
Cover: Phil Gascoine
Posted by Lew Stringer at 22:26