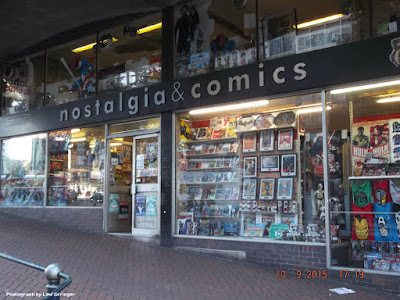 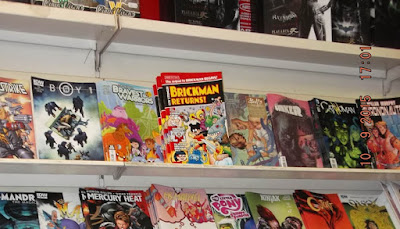 My own Brickman Returns! comic is currently on sale in Nostalgia and Comics, as are several other small press comics. Even more encouraging is the fact that Nostalgia and Comics give 100% of sales back to the creators. That's right; the shop makes no money on selling small press comics. They do it because they're good people and to support the creators.

I haven't visited many comic stores in recent years but I know that London's Gosh! Comics and Orbital Comics definitely stock small press / indie titles. Here's comics creator Jessica Martin a couple of years ago in Gosh! Comics proving that point with her first self-published comic It Girl. Behind her are shelves full of small press comics... 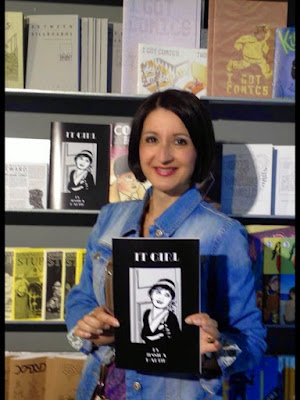 Thanks. Needed to be said.

Thanks for letting us unaccountable posters back in. I hope you don't get too much spam as a result.

Dave comics is still going in Brighton? that is probably the closest comic shop to me.. though still what I view as some distance.. very little comic book stuff in the south east.. well, apart from WinterCon but... not my scene..

Its good to see some good UK comic shops through, too many of the near local ones to me (there used to be two in Maidstone) were too focus on American comics only, no comic mags (like Beano, Dandy etc), and even then, had more 'toys and games and videos' which no comic links at all to make them work as a shop. No offense to anyone, cause I don't mind that TOO much (but I do if they wish to call themselves a comic shop. Something like 'Nostalgia and comics' clearly shows two things, but saying you are a Comic shop and then that is just a minor part can be annoying..

one of them Maidstone ones didn't even like you to get to the Comics.. they covered them in Beanie Babies (anyone remember when they were 'all the rage'? boy, the really rare one that cost people hundreds back then.. go for £5 or so now.. that makes me smile ^_^.

anyway.. It's good to have a list like this of Comic shops that do justice to the name and make people proud. I would love to visit Nostalgia and Comics some time but it's a real journey for me. While it wouldn't be that long via a couple of trains (from me in Hastings to London, underground to the other side of London, train from London to Birmingham), personally,... there are reasons why even London is a bit of a long journey.

Yeah I have read a few folk saying that (as you say maybe that is the case inthat area) but Forbidden Planet and "A1 Comics and Toys" in Glasgow also stock small press comics as well (and I seem to recall a couple in Edinburgh shops stocking a good amount of small press comics last time I visited for the festival).

I take it that's a Forbidden Planet International branch, Paul? (Rivals to Forbidden Planet.) They also own Nostalgia and Comics. By the way, I already have the Edinburgh shops on the list above, unless you mean two others?

Thanks for the shop suggestions, folks. I have a few others to add too, which I'll do tomorrow.

Well, one company has 'International' in its shop logo and the other one doesn't. (Different logo designs too.) The Forbidden Planet-without-International tend not to stock small press and indie comics. Yes, looks like the Glasgow one is FPI. I'll add it to the list.

When we talk about independent / small press comics we mean self-published titles, or those from small publishers, with small print runs. Not every company that's not Marvel or DC. Image hit the big league as soon as Spawn became an instant hit and had a movie based on it.