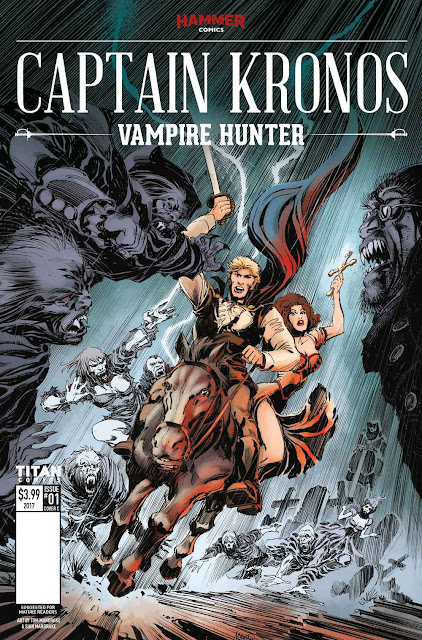 Arriving in September from Titan Comics is Captain Kronos: Vampire Hunter No.1, the first in a four issue mini-series. With the superb creative team of Dan Abnett on scripts and Tom Mandrake on art, this promises to be good!

Captain Kronos: Vampire Hunter is part of Titan's line of comics based on Hammer movie properties and is inspired by the 1974 film of the same name. A Captain Kronos strip appeared in House of Hammer magazine back in 1976 but this comic features all-new material.

There's some very interesting comics coming from Titan over the coming months and I'll post news about them at a later date.
Posted by Lew Stringer at 04:12

Now this looks interesting. The Captain kronos movie deserved a sequel so this is the next best thing.

I've heard of the Captain Kronos film but I've never seen it which is odd because I'm sure I've seen all the other Hammer films.

By the way, Hammer made the 'On The Buses' films - so will there be a Titan comic featuring Stan, Jack and Olive ?

Seriously though, Harry North dud a very nicely illustrated On The Buses strip for Look-In that would be worth seeing again.

The girl doesn't look too secure on the horse, does she?

It all adds to the tension of the moment! (Plus it makes it easier to see her than if she was sitting astride the horse behind Kronos.

I think the artist is just trying to make sure the reader gets his money's worth. And then some!