COMIC HEROES No.32 is here 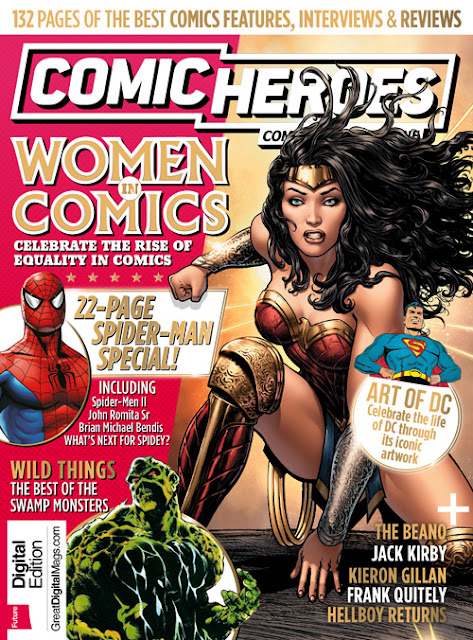 Just a very quick heads up to say that the latest issue of the quarterly comics news magazine Comic Heroes is out now. I haven't seen a copy yet as my local shops no longer stock it, but I've ordered the issue via mail order from this site:
https://www.myfavouritemagazines.co.uk/film/comic-heroes-back-issues/

I'll review it when my copy arrives in the post!

Also out this week from the same publisher (Future) is a new issue of SFX with features on Marvel's new Defenders TV series, the Valerian movie, and more. 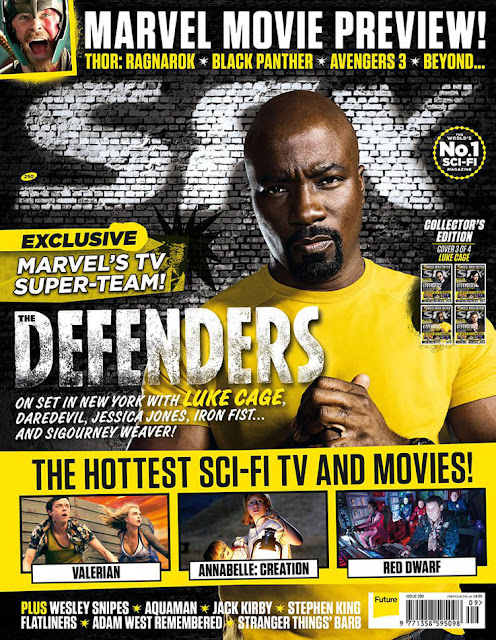 Good to see Beano mentioned on that Comic Heroes cover, and not just American material.

It's a British mag, so it should feature more content about UK comics than it does really. Obviously Marvel/DC are the selling point but it would be nice to see them devote more pages to British comics old and new. The Beano feature is about the website and new TV show.

My local Tesco no longer stocks Comic Heroes either...I can see it getting cancelled for a second time before too long.

Annoying isn't it, Colin? I used to buy mine from my corner shop, then they cancelled their order. So I started buying it from my local WH Smith, then they stopped having it. I think it's crazy that retailers cancel guaranteed sellers. Seems they don't like devoting shelf space to one mag for three months unless it's going to sell sufficient quantities. Shifting one or two copies per shop isn't worth their time so they drop it.

The mail order system is good, and costs the same as the cover price. The last issue arrived quickly so I'm hoping this one will too.

I happened to be in Reading at the weekend and spotted COMIC HEROES in both town centre branches of WHS, so grabbed a copy. But both also had the previous issue still on sale (and London branches of WHS were still only stocking the previous copy) so I suspect a few branches got their copies early... or the new issue landed before the recall note for the previous one was sent out. One branch might be an oversight (my local London branch currently has two issues of INFINITY magazine on sale, presumably because whoever racked the new issue failed to spot they still had a stack of the old one partially hidden behind another title) but two seems unlikely.

The only shop that seems to stock it up here in the Glasgow area is the W H Smiths outlet at Glasgow central rail station I haven't seen it recently in any of their larger stores (and Forbidden Planet of course) Saying that its not that easy to get the Pannini Marvels or Titan DC books other than in Smiths larger stores (luckily my store in Hamilton has them). I have to admit I don't get every issues but got the got the last 2 issues and enjoyed them so I might just get a subscription myself

UPDATE: I found the latest issue of Comic Heroes in Tesco this morning ! But the last two issues definitely weren't available because I looked for them. Unfortunately my local WH Smith's closed in 2014 so I rely on Tesco for magazines. They also sell only four of the seven Panini Marvel comics - why only four rather than all of them is a mystery !

My local WH Smiths has all the Panini comics but my corner shop only stocks the Avengers title. Strange distribution.

My Smiths shelves Infinity amongst the young children's comics for some mad reason!

Funny that. My local WHSmith has all of the Panini/Marvel and Titan/DC CEs, Asda only do Astonishing Spider-Man, and McColls only do Wolverine and Deadpool! Which they do sensibly put on a higher shelf with the lads mags, and not alongside the kids comics.

Couldn't find it at local Smiths and its never in supermarket. I've gone back to readly this month, not a huge fan of reading this way but comic heroes digital copy cost is around half the cost of a monthly readly subscription. Good name check by Leah Moore Lew. I quite like the articles on indie and small press comics, would prefer more of those and of course more on UK comics rather than reading about DC and Marvel.

Yes, I'd like to see more UK comics covered too, because *everyone* covers superhero material and there's not really anything new to say about the history of Spider-Man or whatever. I appreciate a superhero emphasis sells the mag, so that's necessary, but a few more articles on UK material wouldn't hurt.

I'm still waiting for my copy. Has Leah mentioned me then? That's nice of her. Leah's dad used to buy Oink! for her and Amber when they were kids.